UST futures and JGBs are flat this morning with trading in Japan closed on account of a public holiday in the Asian nation, while the US markets will also be shut today. The market has, however, sharply increased its expectations for rate hikes from the Fed following last week’s jobs numbers. The UST 2yr yield has risen above 4.300% and is nearing the peak reached in late September once again, while the 10yr benchmark remains near 3.885%. It seems that bond traders are once again following the mantra of don’t fight the Fed, as those bullish on bonds earlier last week were hurt by the resilience of the US labour market, which should keep the Fed on track for another 75bp rate hike at the next FOMC meeting.

Ethiopia: Talks led by the African Union aimed at ending Ethiopia’s two-year war have reportedly been delayed indefinitely as the facilitators of the negotiations work on addressing logistical challenges. The Ethiopian government as well as regional authorities in the Tigray region had accepted an invitation by the African Union last week to negotiate in South Africa on ending hostilities in the country. The conflict between Ethiopian government forces and dissident Tigrayan fighters resumed in August after a five-month lull. The renewed fighting threatens to hinder efforts by Ethiopia’s government to improve relations with international lenders as it awaits an International Monetary Fund loan amid efforts to restructure its debt.

Ghana: After concluding its visit to Ghana on Friday, an International Monetary Fund team said that talks with the country on a potential loan program had been constructive, but more work was needed on a debt-sustainability analysis. The IMF said that it would return to Washington to advance its technical work, including making further progress on assessing Ghana’s debt sustainability. Head of the IMF delegation to Zambia Stephane Roudet, said that the IMF “had constructive discussions on policies aimed at restoring macroeconomic stability and laying the foundation for stronger and more inclusive growth. Key areas of focus included ensuring public finance sustainability while protecting the vulnerable, bolstering the credibility of monetary and exchange rate policies to reduce inflation and rebuild external buffers, preserving financial sector stability, and steps to encourage private investment and growth, including by improving governance, transparency, and public sector efficiency.” Talks are to continue with authorities, including during the upcoming annual meetings at the IMF.

Nigeria: President Muhammadu Buhari on Friday presented a record spending plan that hinges on a significant increase in oil output and the fastest economic growth rate in almost ten years. Expenditure is forecast to increase by 18% at NGN 20.5trn ($47bn) in 2023. The spending plan will drive economic growth, with a 3.75% expansion on GDP forecast for next year. The budget deficit is projected to be at NGN 10.78trn or 4.78% of GDP, exceeding a legal threshold of 3% stipulated in Nigeria’s fiscal responsibility law. Buhari said that the government expects to raise NGN 16.87trn in revenue, NGN 1.9trn of which will be generated from crude sales and taxes. The budget assumed an oil price of $70 a barrel, an exchange rate of NGN 435.57, and that the country will pump an average of 1.69mn barrels a day, compared to 1.16mn barrels daily in September. President Buhari also noted the government plans to scrap the fuel subsidy next as “its current fiscal impact has clearly shown that the policy is unsustainable.”

Tanzania: Moody’s on Friday affirmed Tanzania’s long-term foreign debt rating at B2 while the outlook was changed to positive from stable. According to the ratings agency, the outlook change to positive reflects Moody’s view that political risks have lessened under the government’s new approach to promoting economic development and engagement with the international community. Moody’s added that factors that could lead to an upgrade on the ratings are if the government’s efforts to establish a track record of investment-friendly policy and regulatory stability became increasingly embedded in the country’s institutional structures, and supported sustained investment, increasing growth potential and supporting the government’s revenue-mobilization capacity. Meanwhile, the outlook could be changed back to stable if there were minimal improvements in FDI, potential growth, and the government’s revenue generation capacity or evidence of a loss of reform momentum and increased political risk and policy uncertainty.

Rwanda: Under a new tool intended to help Rwanda bolster its defence against climate change, the International Monetary Fund agreed to lend Rwanda $310mn. According to the Washington-based lender, Rwanda becomes the second country to get a deal for access to the IMF’s new Resilience and Sustainability Trust. The pact will help the nation lower its cost of financing projects to mitigate climate change. Rwanda estimates it will cost $11bn through 2030 to attract new investments to fight hotter weather, changing rainfall patterns, and flooding.

Forex: A new set of currency derivatives in Egypt are reportedly on the cards

The Central  Bank of Egypt (CBE) is reportedly planning to allow new currency derivatives to unlock liquidity in the local market, making available instruments to hedge against risks to the pound, which has come under immense selling pressure this year. According to a Bloomberg report citing a source close to the matter, under the plan, domestic lenders would introduce onshore non-deliverable forwards and options that allow companies and investors for the first time to bet on or hedge against swings in the currency. The source added that the objective is to build a more transparent local market with the credibility to guide expectations on currency movements. 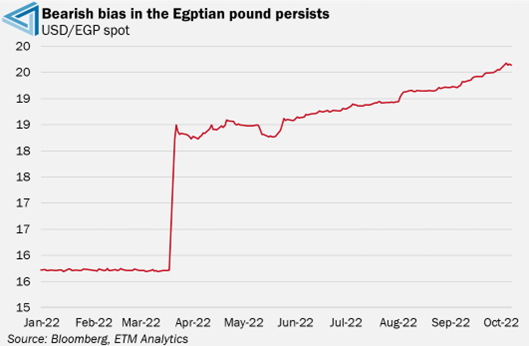 The plan marks the latest move by Hassan Abdalla, who became acting central bank governor in August after the surprise resignation of his predecessor, who has long been seen as a supporter of a stable pound. The government has already conceded a more flexible currency is necessary to support an economy that’s grappling with a shortage of dollars. Note that an overvalued currency has left Egypt vulnerable to external shocks, and a more flexible currency system may be required.

Fixed Income: Zambia is expected to make its first debt restructuring proposal to its creditors

According to the Finance Ministry, Zambia is expected to make its first debt restructuring proposal to creditors by the end of the year, with the goal of having a memorandum of understanding completed by Q1 of next year. Zambia is seeking debt treatment on $12.8bn of its liabilities, which represents some 64% of its external debt stock.

Note that Zambia’s IMF program parameters warrant an external debt present-value reduction of $6.3bn or 49% of the external debt to meet the targets set out by the lender by 2027. The discount rate that is expected to be used to calculate the NPV of the debt relief will likely start at 5% but with negotiations, may decline from there. 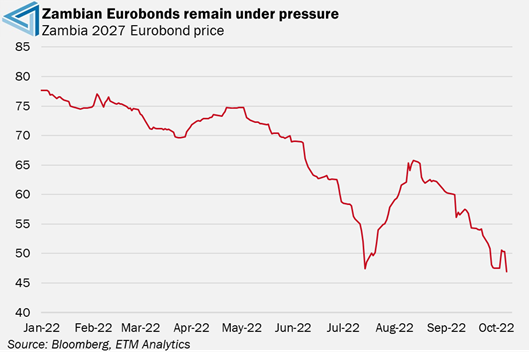 The restructuring could range from significant haircuts on debt with a short maturity, to maturity extensions with concessional interest rates and no cut in the original value of the loan. Bondholders have criticized the IMF’s framework for Zambia in recent months, and with negotiations still to come, we could see the final agreement represent slightly better terms for bondholders over what is proposed now.

For Zambia, the restructuring of its debt maturity profile and the budget consolidation measures required under the IMF program suggest that a notable improvement in its finances is possible and that cash flow will be improved. There is a lot of low-hanging fruit that can be consolidated to provide a lift to the country’s fiscus, including inefficient investment expenditure and significant subsidies for fuel and agriculture.  with its creditors to restructure.

The FAO food price index has fallen for the sixth month in a row, retreating from all-time highs earlier this year after the war between Russia and Ukraine broke out. The latest drop was driven by a 6.6% month-on-month fall in vegetable oil prices, with increased supplies and lower crude oil prices contributing to the decline. Risks to crude prices are however tilted to the upside following OPEC's latest production cut, which has resulted in crude oil gaining the most since March. Higher crude prices suggest that the easing of food inflation could slow, given how fuel is a key input in the agriculture sector. 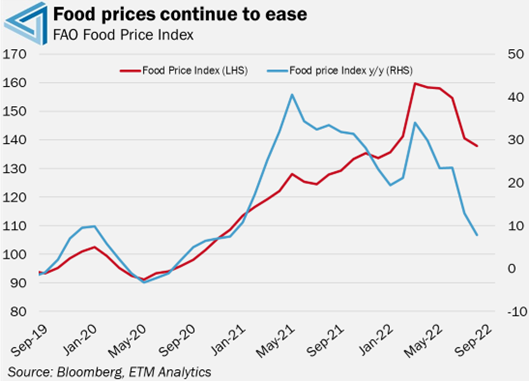 By contrast, FAO's cereal price index rose 1.5% month-on-month in September, with wheat prices climbing 2.2% because of concerns over dry crop conditions in Argentina and the United States, strong EU exports and heightened uncertainty over access to Ukrainian Black Sea ports beyond November.

The majority of the globe has been facing soaring inflation for the last few months, driven by food and fuel prices. Both food and fuel prices have been easing, providing some much-needed relief from inflation. However, the main risk to food prices in the coming weeks is if the UN grain agreement between Russia and Ukraine is dissolved. The agreement was reached in July and is only valid for 120 days, and there are risks that Putin is going to make changes to the agreement, which could result in supply constraints and high food prices returning.