Nigeria issues 2029 Eurobond, Egypt back in talks with the IMF

The USD has had a tough week and will head into the weekend on the back foot. Both the EUR and the GBP have made back more ground and are trading above 1.1050 and 1.3150, respectively, with only the JPY losing ground as overall risk appetite returns. Although equity markets responded favourably this week by recovering off their lows due to talk of progress in negotiations between Russia and Ukraine, reports out of Ukraine suggest differently. Therefore, any gains made against the USD are tentative and heading into the weekend, the situation remains fluid.

Oil rebounded sharply yesterday and remains bid this morning, capping off another volatile week with prices back near $110 per barrel when looking at the front-month Brent contract. The rebound has been driven by doubts over the progress of peace talks between Ukraine and Russia, with the Kremlin suggesting yesterday that recent reports that a deal is near are wrong and that a lot of progress still needs to be made. This has placed a risk premium back into the markets, and will continue to see Russian crude shunned by market participants, entrenching a liquidity crisis and keeping the market volatile.

Egypt: Egypt is reportedly in talks with the International Monetary Fund (IMF) on possible support that could include a loan, as shockwaves from the war in Ukraine add pressure. Reports citing sources close to the matter suggest the talks are looking at several options, including a so-called precautionary and liquidity line, credit that can be tapped if needed, or another form of assistance. A non-financial agreement such as a so-called policy coordination instrument, where reforms are discussed and agreed, is also on the table. If confirmed, the talks highlight the urgency of securing support at a time when a combination of soaring commodity and energy prices and a wave of global monetary tightening adds strain to the economy.

Kenya: The World Bank yesterday granted Kenya $750mn to support the country's economic recovery from the coronavirus pandemic. The bank's financing will "help accelerate Kenya's ongoing inclusive and resilient recovery." The funding is part of the bank's development policy operation or DPO loan series, which seeks to provide low-cost budget financing and support key policy and institutional reforms. The bank added the DPO would enhance the performance of Kenya's domestic debt market, reform the electricity industry and improve governance. The funding is on concessional terms at an interest rate of about 3%. It's the fourth time Kenya has tapped the DPO facility in three years, bringing cumulative borrowing to $3.25bn. Kenya received $750mn in June last year, $1bn in May 2020, and $750mn in 2019.

Nigeria: Nigeria's senate has passed legislation amending money laundering rules and making it mandatory for lenders to report suspicious transactions. The Money Laundering Prevention and Prohibition Act 2022 requires lenders to report all single transactions worth more than NGN 5mn ($12,035) entered into by individuals and those involving corporates worth more than NGN 10mn to the Special Control Unit Against Money Laundering. Prison sentences will range from 2-5 years for offenders, while institutions will incur fines of as much as NGN 50mn, and their relevant officials could be prosecuted. According to the government, banks, other institutions and professionals will be legally required to "to identify and assess the money laundering and terrorism financing risks that may arise in relation to the development of new products and new business practices."

Uganda: The finance ministry is seeking lawmakers' approval to borrow UGX 2.049trn for supplementary expenditure in the year through June. Note that the government has already borrowed 79.5% of the total domestic borrowing requirement approved in the budget as there was a need to frontload borrowing so as to deal with the covid-19 interventions in the first half of FY2021/22.

Precious metals: The gold market has consolidated north of the $1930.00/oz mark into the final day of trade for the week. The market has absorbed the Fed’s decision to hike rates and is now focused squarely on the risk of sustained higher inflation numbers and the geopolitical backdrop in Eastern Europe. As mentioned yesterday, gold is an excellent hedge against both of these factors and we remain convinced of the metals value at a time like this. We expect investors to accumulate on any dips towards the $1900.00/oz mark.

Base metals: The LME nickel market remained a shambolic place with the price of the metal falling by the maximum allowed for the second day as the market hopes to reset following the short squeeze last week. The 8% daily limit was quickly reached before the exchange called it a day at $41945/tonne and only a handful of trades were filled. This has brought the metal the closer to the value of the Shanghai contract but at this rate it will take another couple of sessions to get to “fair value”  which implies a fall of just over $10000/tonne for the LME contract.

Forex: The Ghanaian Cedi could be in for more pain

The Ghanaian Cedi has come under considerable selling pressure at the start of the year. The GHS has lost almost 15.0% on a year-to-date basis against the USD and is ranked as the worst-performing African currency tracked by Bloomberg. The GHS has been on a downward spiral as a result of factors such as perceived risks in the economy due to high-interest payments on borrowed funds and financial challenges, half a decade-high inflation, rating downgrades, high demand for hard currency amid low supply, and waning confidence in the country’s policy credibility. The former has fuelled the selling of the country’s international bonds by investors and consequently a reduction in foreign inflows. 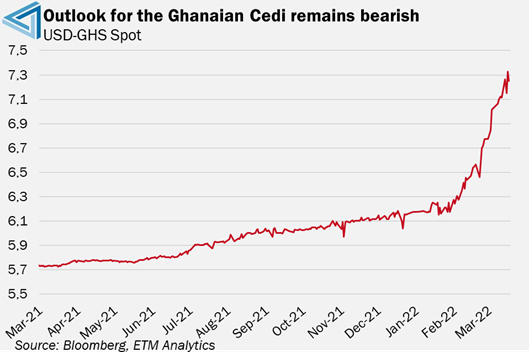 The developments in Ukraine have led to elevated commodity prices, and more importantly for Ghana, higher oil prices, has exacerbated the selling pressure on the currency. So far, the Cedi has shown a muted reaction to the Bank of Ghana’s interventions. At the last FX forward auction rate on March 8, Treasury sold a total of $75mn against bids worth $296.75mn demanded by investors across 7- to 45-day tenors. This represents a bid cover a ratio of 3.96, highlighting the strong demand for the USD.

Looking ahead, the outlook for the Cedi remains decidedly bearish given persisting fiscal concerns, low export inflows, and increased rotation out the country’s bonds by foreign investors. While the BOG may intervene further and potentially hike the policy rate at next week’s meeting to help stem the slide, we see further downside risks to local currency until measures are taken to address its fiscal and debt challenges.

A day after the Federal Reserve kicked off its hiking cycle, Nigeria reentered the Eurobond market, selling $1.25bn in dollar-denominated debt maturing in 2029. The debt sale came as a surprise to investors, given that yields across the globe are on the rise as the Fed raises interest rates and commodity prices surge, driving up inflation risks. However, Nigeria wasn’t the only developing nation to tap the international bond market, with Turkey also issuing Eurobonds maturing in 2027 on Thursday.

Given the deterioration in global lending conditions amid rising interest rates and choppy market conditions as the war in Ukraine continues to roil risk appetite, Nigeria and Turkey had to pay up for their respective issuances. That said, Nigeria paid 37.5bps less than its initial guidance for the 7yr Eurobonds, which sold at a premium of 55bps above its existing Eurobonds maturing in 2028. The timing of Nigeria’s issuance was of particular interest to investors, given that the country is benefitting from windfall revenues linked to elevated international oil prices. 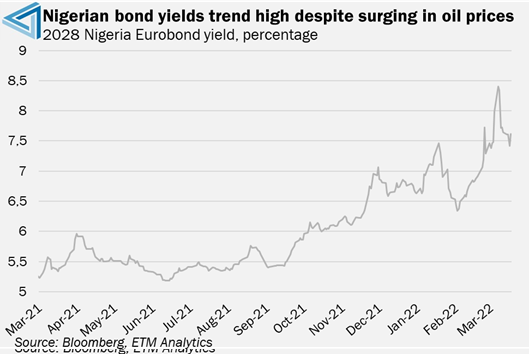 Bloomberg reported that bids for the 2029 Eurobonds came in above $2.75bn, citing a person with knowledge of the matter. This suggests that the cover ratio for the dollar bond issuance stood at 2.2. Given the current conditions, this is a respectable cover ratio and suggests that investor appetite for taking on Nigerian debt is healthy.

Looking ahead, while Nigeria’s debt to GDP ratio is below many of its African and developing nation peers, the pace of fiscal degradation is concerning, with the country ranking amongst the worst in terms of fiscal deterioration in ETM’s fiscal risk model. Nigeria’s budget deficit is projected to widen to 6.4% of GDP this year from a pre-pandemic average of 4.3%, partly due to the rising cost of fuel subsidies. As such, we expected that the fiscal premium demanded by investors for holding Nigerian sovereign debt will remain elevated.

Macroeconomic: With the FOMC decision out the way, South Africa’s upcoming rate decision is in focus

Heading into the March 24 SARB MPC meeting, we expect the SARB to deliver a third consecutive 25bps rate hike as policymakers look to rein in inflation expectations, which have surged on the back of soaring commodity prices, particularly food and oil. ETM's proprietary indicators suggest that while headline inflation could threaten the upper limit of the SARB's 3-6% inflation target range in the near term, inflation is expected to moderate later this year as supply chain pressures ease and high base effects kick in.

Given SA's relatively contained inflation outlook, the market is still pricing in too much rate hike risk, with traders pricing in substantial risk for outsized rate hikes for the upcoming five MPC meetings. The economy is weak, the credit cycle soft, and the ZAR resilient. It is not the kind of environment that would result in runaway inflation. 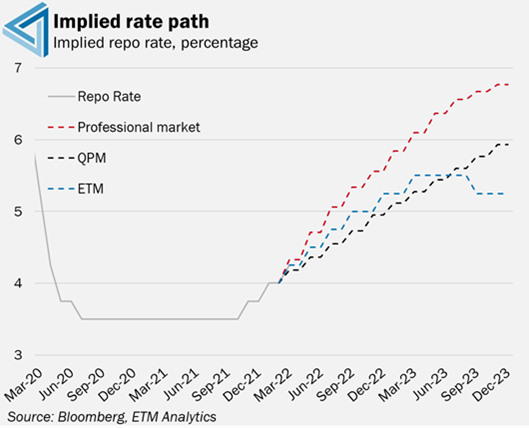 It is always useful to calibrate expectations by assessing the SARB's Quarterly Projection Model (QPM) vs what the market anticipates and then overlay in-house expectations. The QPM has been relatively stable in recent quarters and has continued to target a repo rate rising back up to the 6% mark. This forecast assumes an inflation rate that remains buoyant and a SARB that seeks to lift interest rates back to a neutral level.

In the short-term, the risk to the SARB's expectations rests with the SARB doing more to contain inflation expectations in the face of a commodity and energy price shock while also wanting to keep pace with the tightening of the Fed.

Longer-term, the risk is that the SARB is overestimating the pass-through into inflation. Historically, one of the criticisms of the QPM is that it has not been sensitive enough to the weakness of the credit cycle, which would curtail the degree to which interest rates might need to rise. ETM's repo rate expectations reflect this.

SARB guidance suggests that the SARB could hike rates by 25bp at each of the meetings this year to lift the repo rate up towards 6% by the end of 2023. The risk to this view rests to the downside, especially if growth disappoints and ETM, therefore, expects steady hikes through 2022, but with increasing probability towards the end of the year.