Nigeria is no longer an oil-driven economy

Fed minutes have placed the USD on the defensive and plumbing the lows tested earlier this month. It is difficult seeing any currency offsetting the USD’s slide, so there will be some relief expressed by many countries when they see their currencies appreciate vs the USD. It helps ease inflationary pressures and suggests that the more conservative policies they have adopted will pay dividends in protecting the purchasing power of their currency. The EUR has surged back above 1.0430, while the GBP is trading back towards 1.2100/dlr. Even the JPY has now managed to trade to levels back below 139.00/dlr, and with the USD expected to slide further, currencies are looking to end the year on a much stronger footing. Technically, a break below 105.00 on the trade-weighted USD index opens the door for a further 5% retreat in the USD to unwind more of its overvaluation. The US Thanksgiving holidays will leave investors to consider the Fed minutes carefully, and it is unlikely that the USD will make much of a comeback unless Black Friday is a blow-out success.

Kenya: Central Bank of Kenya Governor Patrick Njoroge yesterday forecast economic growth to slow to 4.7% in Q3, with agricultural output exerting a drag. Agricultural output is seen as contracting 1.9%  in Q3 and 0.9% in 2022 on account of bad weather. Meanwhile, annual inflation is seen as falling back within the 2.5%-7.5% target range early next year, compared with 9.6% in October. The current account deficit was revised downwards to 5.6% of GDP in 2022 from an earlier estimate of 5.9%.

Kenya: The Central Bank of Kenya is offering investors a chance to switch their shorter-dated Treasury bills and one bond into a longer infrastructure bond. The switch allows Kenya to roll over short-term debt into longer securities, and it is the second time that Kenya is offering it following the debut issue in mid-2020. The CBK is looking to absorb securities worth KES 87bn ($711.95mn) through the switch, which will cover specified 91-, 182-, and 364-day Treasury bills and one two-year Treasury bond. The offer, which will see those investors convert their holdings into a six-year, tax-free infrastructure bond, runs until the end of this month.

Nigeria: The Central Bank of Nigeria’s director in the monetary policy department has said that the bank plans to continue tightening monetary policy until it closes the gap with accelerating inflation. According to the director, the CBN remains concerned about the 460bp gap between the two, resulting in negative real interest rates. The director added that the bank would be closely monitoring how its tightening policy has impacted employment, the balance of payments, external reserves, and GDP growth.

Zambia: Headline inflation in Zambia edged higher in November, coming in at 9.8% y/y from 9.7% y/y in October. On a m/m basis, prices rose 0.7% compared to 0.2% in October. A breakdown of the CPI report showed that annual food inflation decelerated to 12.1% this month from 12.2% in October, and non-food price growth accelerated to 6.7% from 6.5%. While inflation in Zambia edged higher, it remains relatively subdued and is forecast to return to the 6%-8% target range in the first quarter of 2024. That said, pressures for inflation to move to double digits are building, and according to Governor Denny Kalyalya, these can be mitigated if debt restructuring talks are concluded in the first quarter of 2023. Note that slow progress on that front and a hard currency demand outpacing supply has driven a more than 9.0% fall in the kwacha since September against the USD. The Governor has said that a resolution to the talks “will have a significant positive impact on the budget, market sentiments, mitigate upside risks to the inflation outlook.”

Zimbabwe: In a bid to revive its economy, Zimbabwe has more than doubled its spending plans for 2023. The budget plan presented by Finance Minister Mthuli Ncube forecasts expenditure will increase by 121% to 4.2trn Zimbabwe dollars ($6.5bn). A large portion of the funds is set to be spent on social services and infrastructure projects, with a key focus on the mining, energy, and agricultural sector to jolt economic growth. Meanwhile, economic growth is forecast to slow to 3.8% in 2023 from 4.0% forecast for 2022. 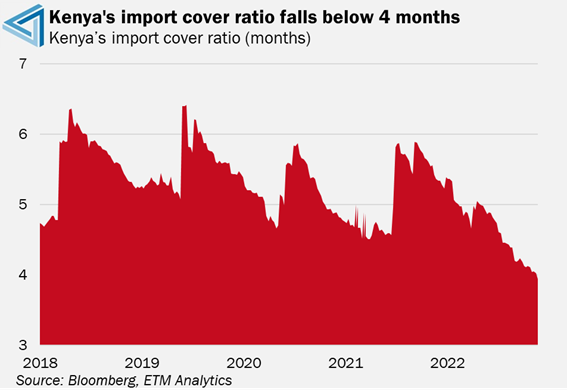 Kenya’s foreign exchange reserves have fallen by more than 20% this year. Factors that have pressured reserves include repayments to bilateral and commercial lenders, a surge in import costs, and continued CBK intervention in the FX market to try to slow the rate of depreciation of the shilling.

Pressure on Kenya’s foreign exchange reserves is, however, expected to ease in the coming weeks, with the CBK expecting hard currency inflows into its reserves to kick in starting from December. Governor Patrick Njoroge cited a $440mn tranche expected next month from the International Monetary Fund and said that more funds would be coming from the World Bank. No further details were provided. Meanwhile, seasonal foreign exchange remittances from tourism and remittances could also support reserves.

While much of the focus for fixed-income traders is centred on monetary policy dynamics at the moment, fiscal dynamics can't be ignored. Speaking of which, there were some notable developments in Ghana yesterday. As fiscal distress risks in Ghana intensify, the government is forced to take extreme measures to mitigate default risks. These measures include a debt-exchange program to lower the country’s borrowing costs. The debt exchange will be new terms that will replace existing terms and exchange debts with longer tenures at cheaper rates.

In his budget speech, Finance Minister Ken Ofori-Atta said that the government is committed to ensuring debt is brought to sustainable levels in the medium- to -long-term. In addition to the debt-exchange program, the Finance Minister set out measures to boost revenues and rein in expenditure. Some of the measures include: 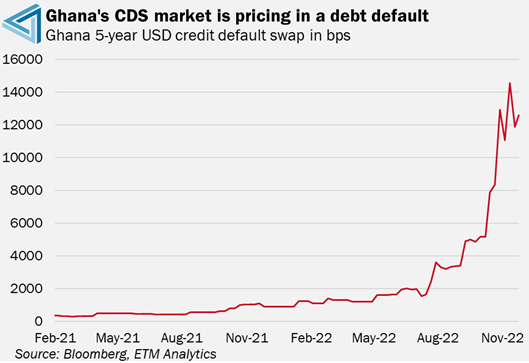 Finance Minister Ofori-Atta said the government is targeting a fiscal deficit of 7.7% of GDP next year. While this is considerably lower than the budget deficits seen since 2020, fiscal hawks will be looking for the government to tighten its belt even more if it is to return to a sustainable debt path. While there were several positives to take out of yesterday’s budget, Ghana remains in a fragile fiscal position. As such, we expect a massive fiscal premium to remain baked into Ghanaian bonds until such a time as there is concrete evidence that fiscal dynamics have significantly improved.

Macroeconomic: Oil’s contribution to Nigeria’s economy has almost halved over the past 3 years

While Nigeria’s economy has historically been regarded as an oil-fuelled economy, a breakdown of GDP data shows that oil’s contribution to Nigeria’s has fallen from around 9.5% at the start of 2020 to just over 5.5% in Q3 2022. The sharp decline in oil’s contribution to the economy comes despite a sharp rise in international oil prices as the country’s production continues to fall. Data from OPEC shows that Nigeria is currently producing just 1.15mn barrels of crude per day compared to 1.93mn barrels per day in Q1 2020. 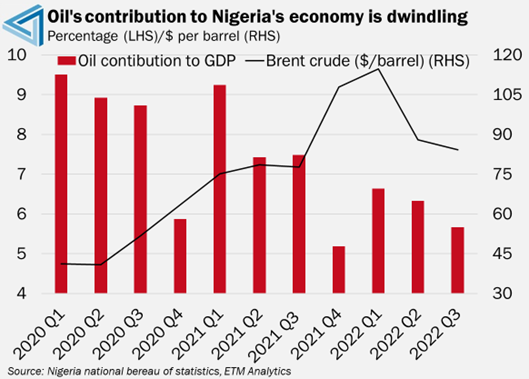 The GDP data showed that growth in the Nigerian economy is being driven by the information & communication and finance sectors. That said, the largest positive contributor to GDP was from the agricultural sector, which contributed 29.67% in Q3 compared to 23.24% in Q2. The statistics agency noted that crop production remained the major driver of the sector. Given the floods in Nigeria, activity in the agriculture sector likely took a blow in Q4.

Nigeria’s economy expanded by 2.25% y/y in Q3 2022, a notable slowdown from the expansion of 3.54% y/y in Q2. The reduction in growth is attributable to the base effects of the recession and challenging economic conditions. Looking ahead, while economic conditions in Nigeria are challenging, high-frequency PMI data shows that businesses remain optimistic about the outlook for the next 12 months. That said, we have the presidential election early next year and expect inflation pressures to remain strong, both of which could be notable headwinds to growth in the economy in 2023.