Gold bulls are certainly cheering this morning as the yellow metal cleared the $1900.00/oz mark overnight, driven by another dovish Fed official played down inflation risks which pressured Treasury yields once again. Fed Vice Chair Richard Clarida stated in a Yahoo! Finance interview that signs of inflation would “prove to be largely transitory”. This set the US 10yr benchmark bond to its lowest level in two weeks, enhancing the attractiveness of gold which has no yield. Both palladium and platinum are on the front foot this morning as the dovish tone of the Fed speakers suggests that rate hikes remain something to worry about in 2022 at the earliest.

Base metals are still experiencing the aftermath of China, stating that they are going to curtail wild price swings and strength controls around commodities in their five-year plan from 2021-2025. Most have taken this to mean that they will at some point look to curtail any speculative activity and there are those that have gone so far as to say they may even adopt a similar approach to their stance on crypto where they have banned certain activities outright. We see this as an extreme view and favour a strategy where the Chinese will aim to smooth prices rather than curtail trading activity.

The dollar has provided the copper market with a leg up this morning. 3m copper was quoted just above the $9950.00/tonne mark earlier in the Asian session. In addition, strike action out of Chile is supporting the red metal this morning.

Kenya: Market focus will rest on the Central Bank of Kenya today as it delivers its rate verdict. The central bank has kept its benchmark interest rate at a record low of 7.00% for the past seven MPC meetings. Market expectations are that the CBK will remain neutral at the upcoming meeting. Headline inflation remains well anchored within the CBK’s 2.5% to 7.5% inflation target band, and the central bank expects it to stay in that range in the near term. This suggests that the central bank has room to maintain its current policy stance to support economic growth.

Zimbabwe: Data published by the Reserve Bank of Zimbabwe (RBZ) released yesterday showed that consumer price inflation continued to slow in May. Headline inflation decelerated for the fourth successive month, slowing from 194.1% y/y in April to 161.9% y/y in May, its slowest pace in 2 years. Month-on-month, inflation rose to 2.5%, a three month high. Although headline inflation has slowed significantly in recent months, the risk to the inflation outlook remains tilted to the upside, and this can be attributed to the persistent dollar liquidity shortages.

Ghana: In a bid to fund a flagship policy to broaden access to education, the government of Ghana is planning to raise as much as $1bn through the sale of sustainable bonds. According to the Minister of State at the Ministry of Finance, Charles Adu Boahen, the proceeds will help refinance domestic debt for social and environmental projects, including loans taken to pay for the government’s free senior secondary school policy. It is worth highlighting that further borrowing by the government will continue to weaken the country’s fiscal metrics, especially if the funds sourced are not used effectively.

Egypt, Ghana, Kenya and South Africa: S&P Global Ratings reported that Egypt, Kenya, Ghana and South Africa are the most vulnerable among twenty emerging-market sovereigns in the case of a shock scenario where refinancing costs will rise by 300bps. According to the rating agency, Egypt and South Africa could see their interest expenditure rise by 1.3ppts of GDP in the first year in this scenario, while Ghana and Kenya may see a 0.9ppt rise. Furthermore, S&P noted that the four countries are already refinancing at market rates above their average cost of debt and also face high rollover ratios as a share of GDP.

Egypt: The hunt for yield continues as Central Banks around the world for the most part remain committed to lower rates for longer to repair balance sheets post the COVID-19 destruction. Thus it is not surprising to see demand for good quality debtors perking the interest of lenders as they aim to boost their income flow. The National Bank of Egypt has received strong interest for its financing needs of a $1bn loan, the lender was originally planning to raise only $750m from a small group of banks, but interest was strong leading the bank to widen the scope to fourteen lenders and raising the amount of the deal. The National Bank of Egypt is taking advantage of the interest looking to narrow the margin its prepared to pay from 270bps to 230bps.

South Africa: The South African Reserve Bank’s leading indicator recorded a fresh record high in March, rising to 121.3 from an upwardly revised 119.3 in the previous month. Although base effects are the main reasons for the record figures, SA's economic recovery is slowly gaining traction, and there are reasons to expect a recovery to continue to unfold. Numerous factors are, however, still restraining a more robust and longer-term recovery, which means that although the leading indicator has reached record highs, the economy may still struggle to grow beyond pre-pandemic levels of output. Implementing a swift economic plan and measures to encourage investment activity in SA would help stave off some of these concerns and support the recovery. Lastly, the distribution of vaccines will prove crucial in reviving the economy going forward.

Following the sell-off in April, the Angolan Kwanza (AOA) has managed to find a firmer footing against the US dollar this month. The AOA has traded on the offensive this month, with the currency appreciating by 0.29% against the USD. The modest bullish bias in the AOA comes on the back of elevated international oil prices. Recall that Angola is heavily reliant on crude oil exports as a source of foreign currency earnings and tax revenue.

Notwithstanding the recent appreciation, the broader bias in the AOA remains decisively bearish, with the kwanza losing almost 3.00% against the USD on a quarter-to-date basis. Idiosyncratic vulnerabilities, including dwindling reserves, mounting fiscal risks and a flagging economy, are underpinning the broader bearish bias in the AOA.

Angola’s net reserves fell to a fresh record low in April. Specifically, reserves dropped for the third consecutive month in April, falling from $8.42bn in March to $7.98bn, its lowest level on record. The persistent decline in reserves leaves the kwanza exposed to external shocks. Looking ahead, while we could see the AOA gain some further ground in the sessions ahead amid the persistent dollar weakness and heightened oil prices, the outlook for the currency remains bearish.

The combination of aggressive monetary policy tightening, a ballooning debt pile and heightened security risks, which has led to a force majeure on Africa’s single largest investment, the Total led LNG project in Cabo Delgado, has resulted in a sell-off in Mozambique’s 2031 Eurobond this year. For context, Mozambique’s benchmark Eurobond yield has risen by more than 175bps since the start of the year, making it one of Africa’s worth performing Eurobonds so far in 2031. Note that Eurobond in yields in many other African countries have traded lower this year. 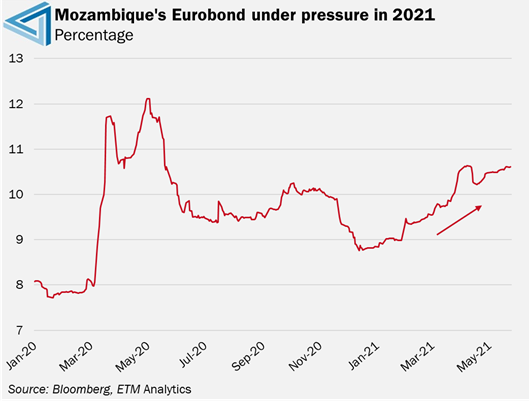 While inflation in Mozambique remains relatively anchored, inflation expectations both domestically and internationally have continued to rise. Moreover, the Mozambican metical has come under some stern selling pressure in recent weeks, with the currency reversing a notable chunk of its gains made earlier in the year. Although we don’t expect the Bank of Mozambique to hike rates again in the immediate future, it is worth pointing out that the central bank is proactive rather than reactive and therefore is likely to maintain a prudent stance going forward as inflation expectations continue to rise. This will underpin the bearish bias in Mozambican bonds. Recall that the Bank of Mozambique hiked interest rates by 300bps at the start of the year.

On the fiscal front, the COVID-19 pandemic has accentuated Mozambique’s fiscal challenges with the government having to ramp up expenditure to support the health care system and cushion the economy from the devastating impact of the COVID-19 pandemic. Note that the government is also having to increase spending as it intensifies its fight against the insurgents in Cabo Delgado. This comes against the backdrop of the adverse impact that the pandemic is having on government revenue. As such, Mozambique’s public debt pile increased markedly, swelling from 103.4% of GDP in 2019 to 122.2% of GDP in 2020. International Monetary Fund projections show that Mozambique’s debt pile is expected to rise further in the years ahead. Specifically, the IMF forecasts that Mozambique’s debt pile will increase to 125.3% of GDP in 2021 and 126.4% of GDP in 2022.

Going forward, with a shadow of doubt being cast over the country’s prospects of becoming a significant player in the LNG space in the next few years, which is expected to provide a massive boost to the country’s fiscus, the topside bias in Mozambique’s 2031 Eurobond yield is likely to persist. Further supporting the notion of a further rise in the 2031 bond yield is expectations for the Bank of Mozambique to maintain a relatively hawkish stance as inflation expectations continue to mount amid soaring commodity and food prices and a weakening currency.

Conforming to expectations, the Central Bank of Nigeria’s Monetary Policy Committee voted in favour of leaving its benchmark interest rate on hold at a multi-year low of 11.50% on Tuesday. This marked the fourth straight meeting that the central bank opted to keep rates unchanged. Note that the decision was unanimous amongst the ten members that attended the meeting. 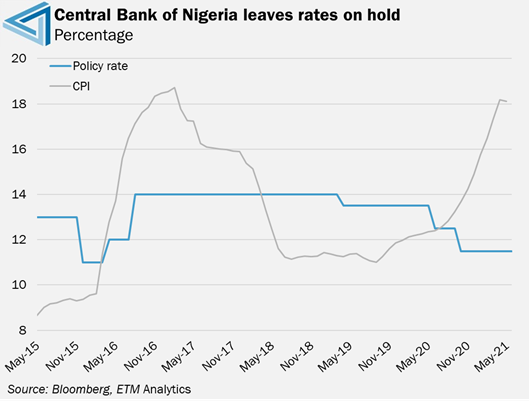 The decision to keep the benchmark interest on hold comes despite soaring inflation. This is a clear sign that policymakers are more concerned about supporting the flagging economy amid the ongoing COVID-19 pandemic. The MPC noted however in its statement that the global economy is gradually recovering, with the recovery being supported by the easing of lockdown measures, the reopening of economies and a gradual rebound in international travel.

While Nigeria’s economy has also staged a modest recovery this year, with GDP in the first quarter of 2021 coming in at 0.51%, the recovery is fragile and risks to the economic outlook remain tilted to the downside amid expectations for a new wave of the coronavirus. The central bank highlighted that the gradual rebound in economic activity is being led by the agriculture and industry sectors.

In terms of inflation, the central bank noted that there was a modest decline in headline inflation to 18.12% y/y in April from a 4-year high of 18.17% y/y in the previous month. April marked the first month in more than a year and a half that consumer price inflation in Nigeria had slowed. The MPC noted that headline inflation remained well above the ceiling of its 6-9% inflation target due to a combination of factors, including heightened security tensions and deteriorating public infrastructure. The MPC also mentioned the impact of exchange rate pressures resulting from capital flow reversals associated with the COVID-19 shock.