The Central Bank of Nigeria (CBN) hiked its policy rate by 100bps to 16.5% today, above the median 16.25% estimate among the 12 analysts surveyed by Bloomberg (with estimates ranging from 15.5% to 17%). This marks the fourth consecutive hike since the cycle began in May, each of which exceeded the Bloomberg consensus, bringing the cumulative increase to 500bps over that period (versus a YTD median of 300bps across our sample of 66 emerging markets) and further solidifying the marginal shift towards orthodoxy at the CBN.

With inflation running at a 17-year high of 21.1% yoy in October, the real policy rate is still firmly negative at -4.6%, below the -2.4% emerging market median. However, with inflation projected by the IMF to decline to around 15% by end-2023, the real policy rate is now marginally positive on a forward-looking basis. More importantly, market rates have finally converged with the policy rate after a 3-year divergence, with the 12-month T-bill fixing closing at 16.5% yesterday. While the policy rate is largely symbolic, this shows that the underlying policy stance has tightened, too. 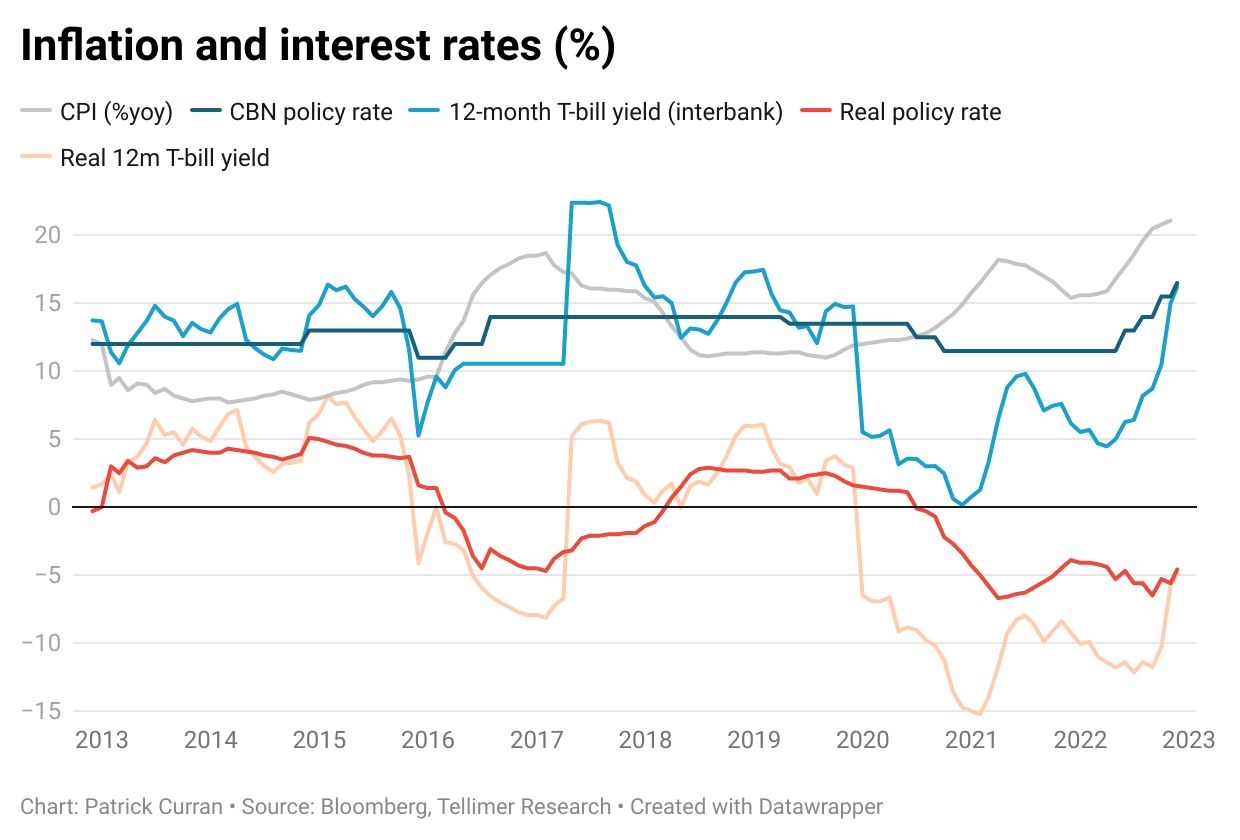 The MPC statement has not yet been published, but CBN Governor Godwin Emefiele said in the press briefing that the previous rate hikes "were beginning to yield the desired results…in view of the month-on-month deceleration in prices" but that "loosening the stance of policy would lead to a more aggressive rise in inflation and erode the gains already achieved through tightening", especially with an uptick in spending expected heading into the December festive season and February 2023 elections.

Indeed, month-on-month inflation has moderated from 1.8% in July to 1.2% in October while core inflation has moderated from 1.8% to 0.8% over that period, and inflation is likely to peak in November and begin a gradual decline from December onward due to base effects. For context, holding month-on-month inflation constant at 1.2% would result in a moderation to 16% yoy in Q4 23 while holding it at 0.8% would cause it to stabilise just below 10% yoy. 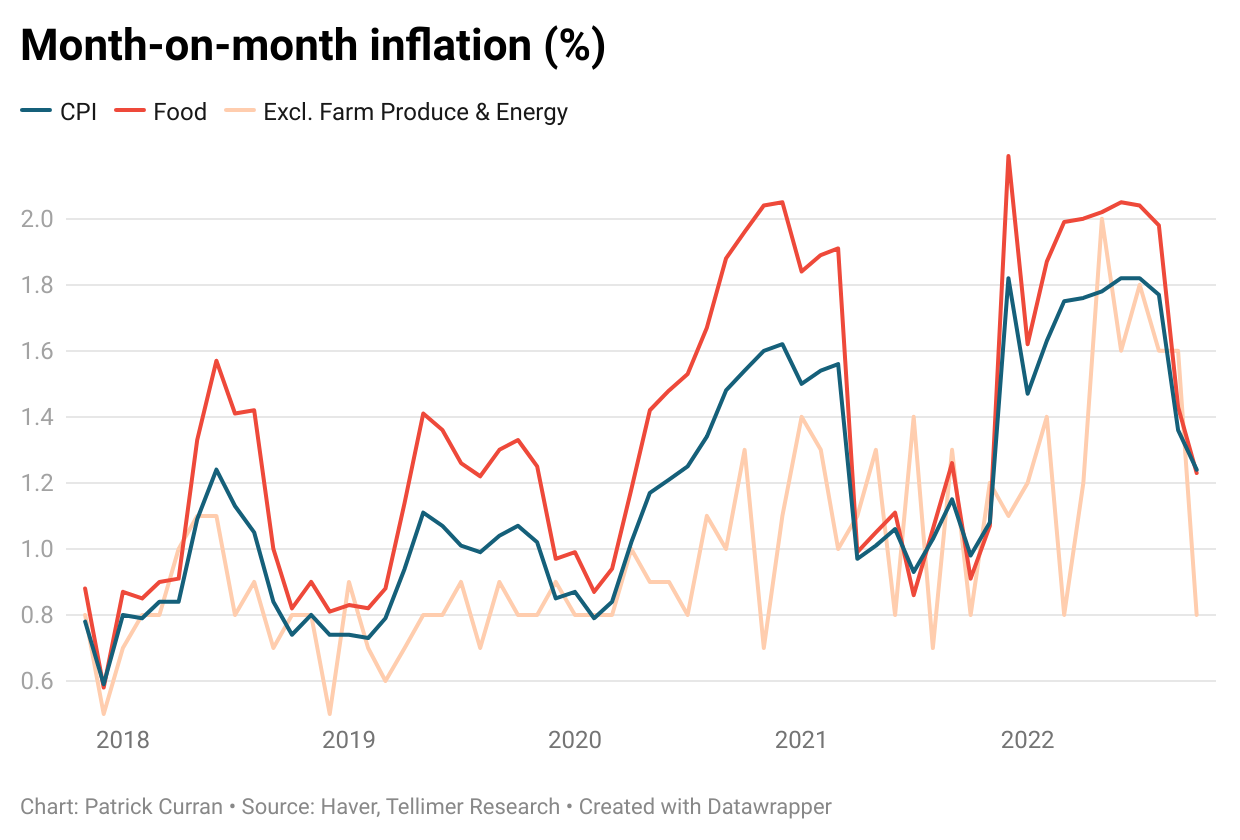 As such, in the press briefing Emefiele said that it was appropriate to continue tightening to narrow the negative real interest rate and instil investor confidence, but at a slower pace than before (with nine MPC members voting for the 100bps hike and two for a 50bps hike). With inflation likely to reach its inflexion point by the next MPC decision on 27 January (the last before elections), the CBN may well decide to adopt a wait-and-see approach as they assess the impact of their recent tightening.

That said, with the real policy rate likely to stay negative until at least Q2 23, further hikes may be necessary. In a statement after its latest Article IV mission on 18 November, the IMF said that "overall conditions remain accommodative" given the negative real policy rate and continued monetisation and direct lending by the CBN, and said that "Ensuring macroeconomic stability requires tightening across all policy levers, and stronger revenue mobilisation and exchange rate reforms."

As we’ve highlighted before, hiking the policy rate will be insufficient to achieve durable single-digit inflation given Nigeria’s broken monetary transmission mechanism, with the IMF recommending 1) the sterilisation of the impact of the CBN’s deficit financing on the money supply; 2) the continued phase out of the CBN’s credit intervention programs; and 3) further rate hikes to send a tightening signal, while welcoming the recent progress in securitising CBN overdrafts and urging swift finalisation. While progress on these fronts has been encouraging, it remains to be seen if the CBN will stay the course.

The IMF also reiterated its recommendation to move towards a "unified and market-clearing exchange rate" and called on the CBN to "step back from its role as main FX intermediator, limiting interventions to smoothing market volatility and allowing banks to freely determine FX buy-sell rates." However, we continue to see FX liberalisation as unlikely until at least after the February 2023 elections, and potentially beyond if Emefiele is allowed to retain his seat as Governor through the end of his term in June 2024.

The parallel exchange rate has been extremely volatile over the past month on the back of the CBN’s demonetisation plans, but has moderated to c775-785/US$ after spiking as high as 900/US$ in early November (our exchange rate proxies tell a similar story). This could reduce the urgency of FX reform in the eyes of the CBN and encourage them to stay the course on its current FX policies. However, Emefiele stayed firm in the press briefing on the 31 January deadline to exchange old notes and promised to unveil the new notes tomorrow, which could lead to another spike in FX volatility as elections approach. 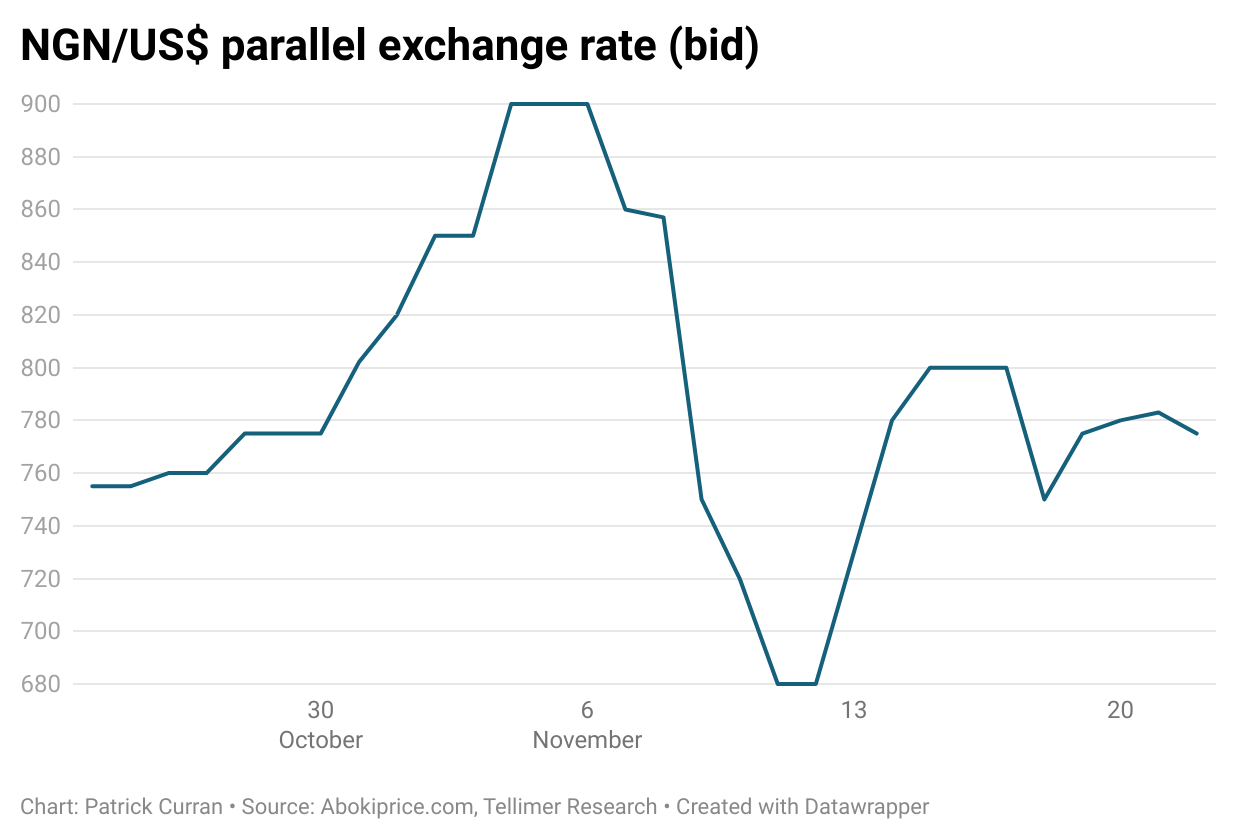 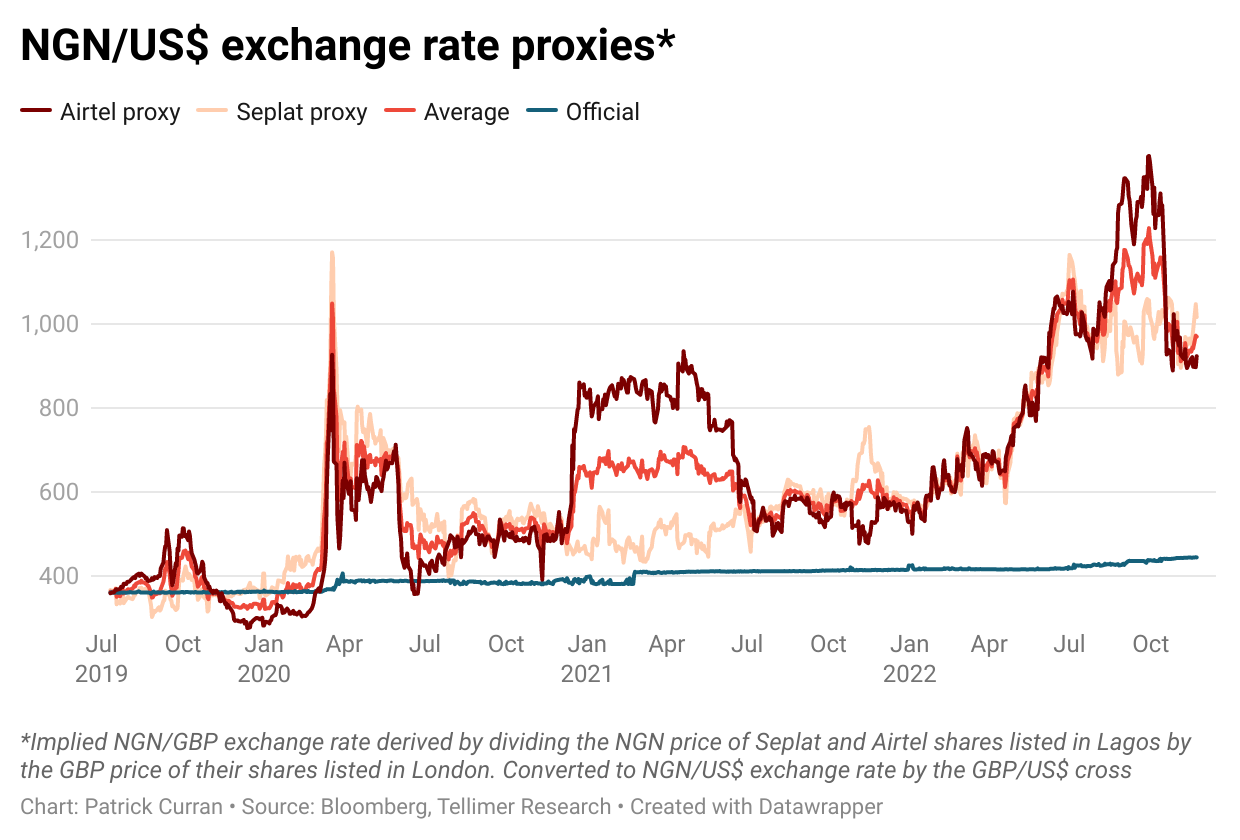 Overall, we welcome the continuation of the CBN's hawkish policy shift at today's MPC meeting, and think inflation will begin to moderate from December onward. That said, this could encourage the CBN to prematurely pause its hiking cycle at the next meeting in January, with further tightening still likely to be needed to engrain a more sustained drop in inflation. And, as the IMF reiterated in last week's statement, the policy rate is still mainly symbolic, with more holistic reforms to the CBN's monetary policy framework needed to engrain a sufficiently tight policy stance.

Until we see further evidence of this underlying policy shift, we think inflation will remain stubbornly high in the double digits. Likewise, until Nigeria’s exchange rate is liberalised, we think FX supply and foreign investment into the economy will remain stubbornly low and, as a result of this (and other longer-term structural issues), growth will continue to be stagnant. 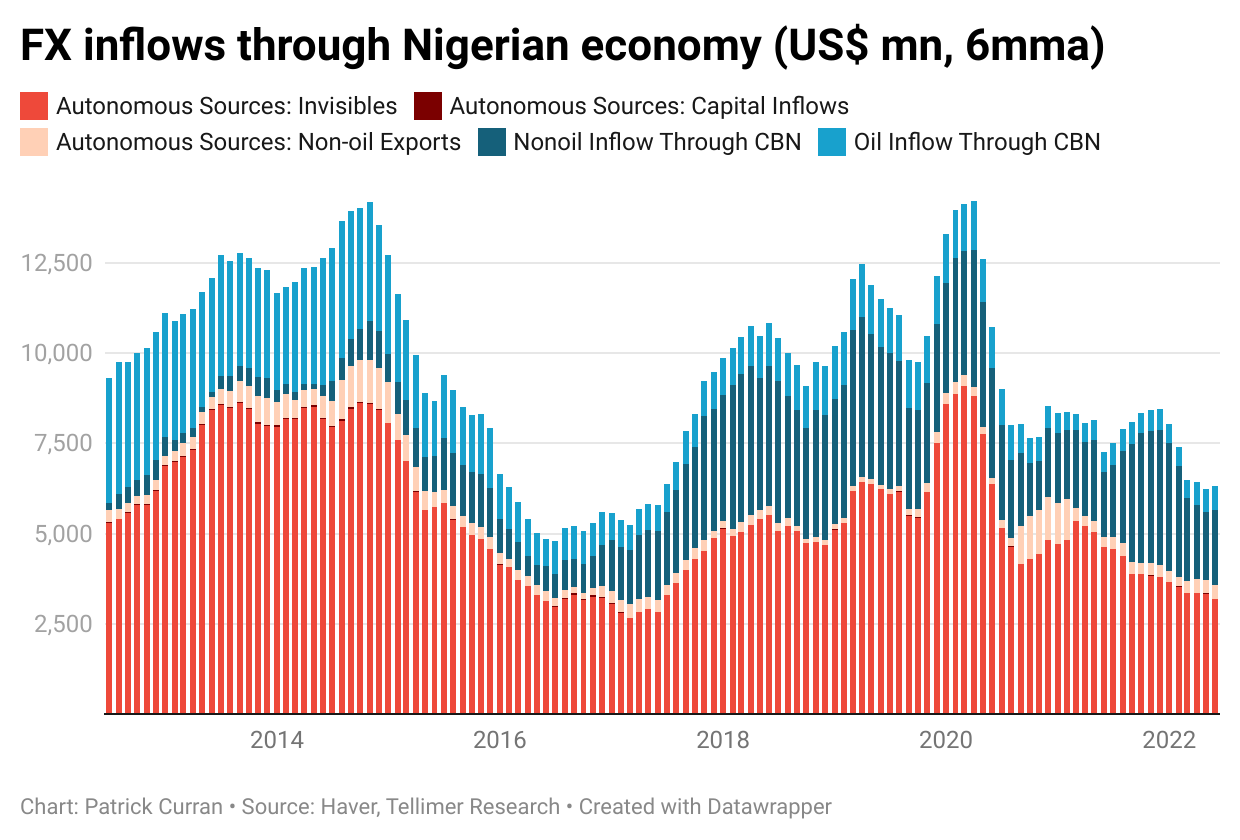 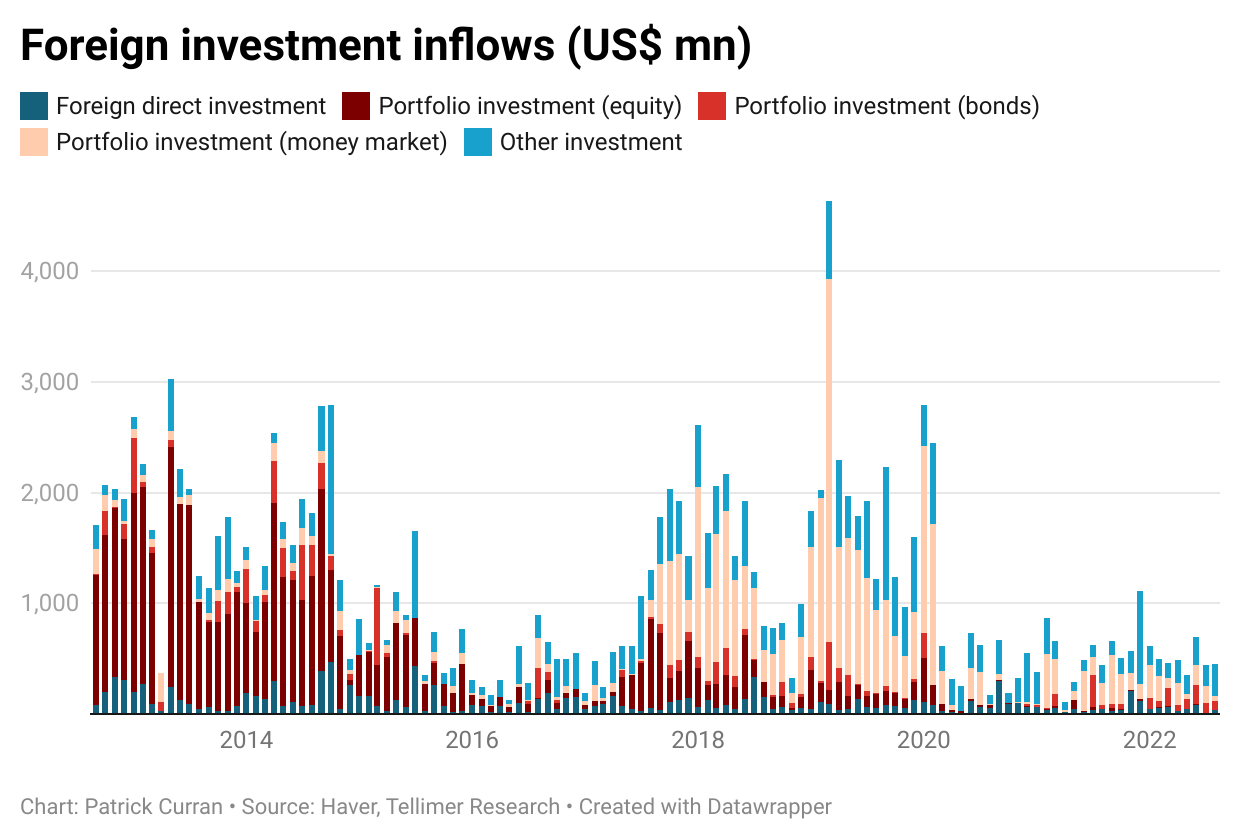 On these fronts, the rhetoric from presidential frontrunner Peter Obi of the Labour Party has been encouraging, with Obi promising to re-establish the independence of the CBN, liberalise the exchange rate in a single unified market, remove import restrictions and fuel subsidies, reduce the fiscal deficit and boost investment, and tackle the insecurity problem.

While it is premature to judge whether Obi will be able to convert his lead in the opinion polls to a victory at the ballot box and whether he will be willing or able to convert his policy rhetoric into action if he takes office, his victory in February could herald a meaningful shift away from at least some of Nigeria's more harmful macro missteps, including its mismanaged monetary and FX policy regimes.

Nigeria: Demonitisation won’t salvage the naira – not a game-changer for banks, October 2022

Nigeria: Securitizing CBN loans may not signal the end of monetisation, October 2022

Nigeria’s budget is not the farewell Buhari intends, October 2022

Assessing the impact of Nigeria’s worst floods in a decade, October 2022

Nigeria: CBN’s elevated funding to the government increases risk to the naira, August 2022

Nigeria: The factors driving the Naira’s collapse on the parallel market, July 2022