Nigeria: Demonetisation won't salvage the naira – not a game-changer for banks

Central Bank of Nigeria (CBN) Governor Godwin Emefiele announced plans on Wednesday to demonetise Nigeria's higher denomination bills, in a bid to rein in cash outside the banking system (NGN2.7tn), which makes up 85% of total money in circulation as of September 2022. The aim of this is to improve the effectiveness of the central bank's monetary policy tools in curbing inflation and tackling FX issues. While this will likely clamp down on speculative activities on the naira in the medium term, it does not address the country's fundamental issues as far as FX is concerned.

For Nigeria banks, we do not think the demonetisation will be a game-changer to LCY deposits, which stood at NGN30tn as of March 2022. But we do think banking stocks are currently trading cheap compared with historical levels.

The CBN will redesign higher denomination bills ie the NGN200, NGN500 and NGN1,000 notes, which will begin circulation in December and the old notes will cease to be legal tender starting 31 January 2023. This is to rein in excess cash in circulation into the "bank vaults" and bring the money supply (M1) within the control of the central bank.

As of September, the currency in circulation (CiC) had increased by over 200% to NGN3.23tn from NGN1.1tn in January 2010 (CAGR: 10%). Over 80% of the cash are currently not accounted for in bank accounts, thereby weakening the effectiveness of the central bank's monetary policy tools. The CBN instructed that there should be no charges on cash deposits up to a stipulated sum of NGN150,000, but there are cash withdrawal limits.

The hope is that the move would help the central bank rein in cash and bring in more of the unbanked population, thereby improving financial inclusion – around 59% of Nigeria's population do not have a bank account (as of 2020), despite the strong growth in Nigeria fintechs. 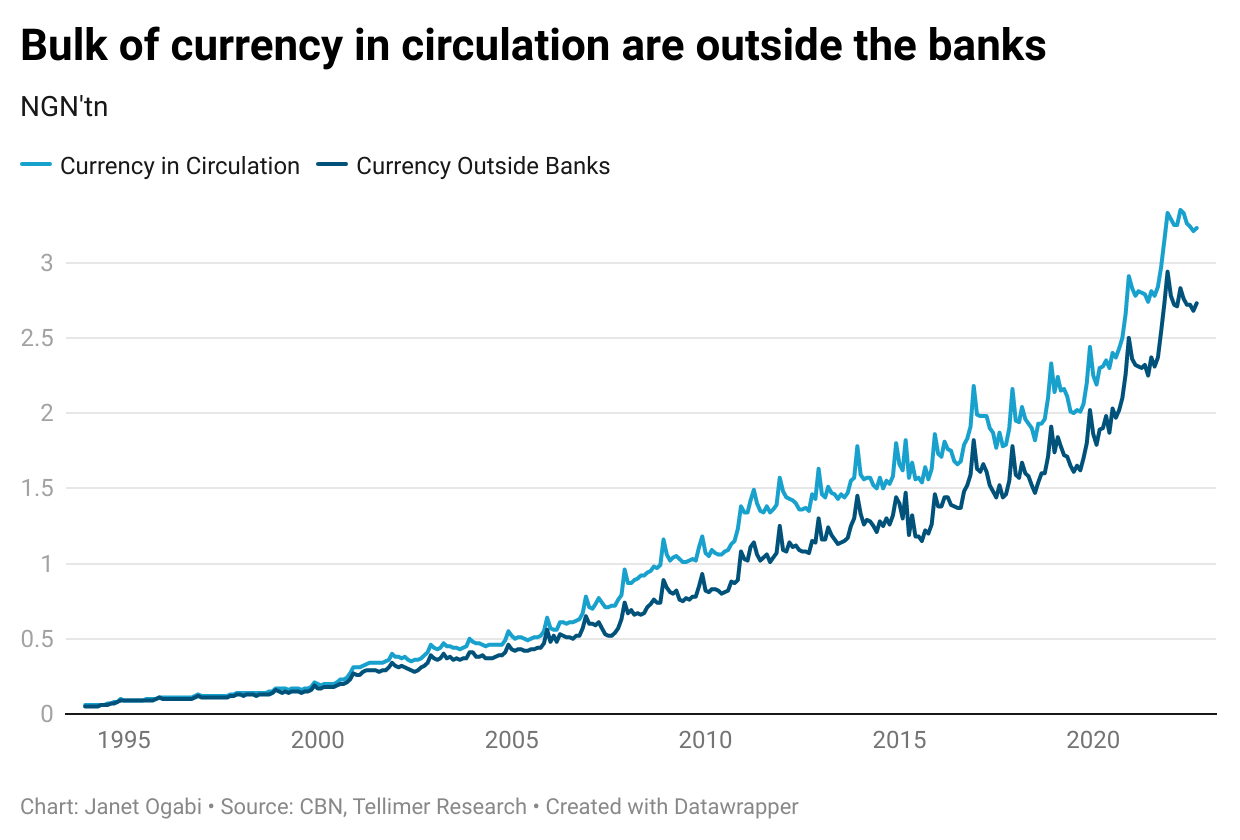 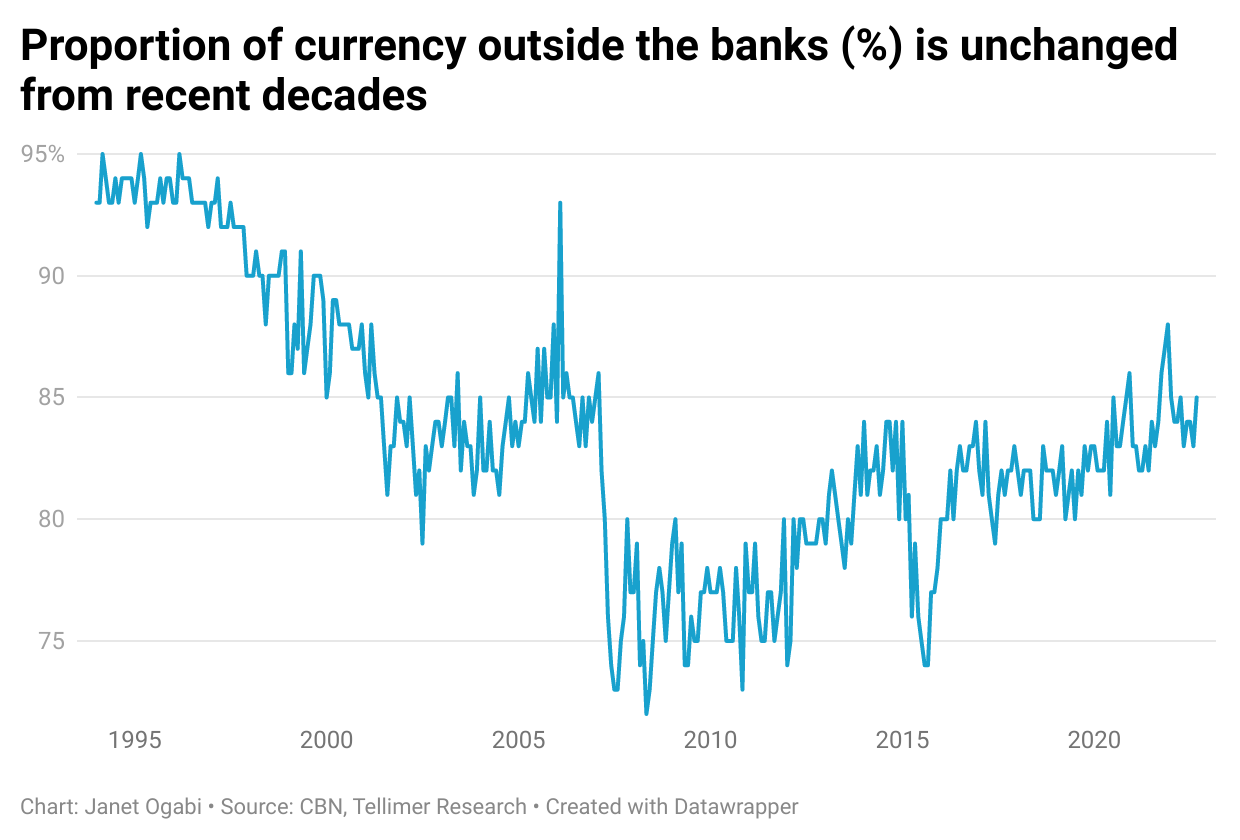 It is worth noting that the real problem is not the proportion of the unbanked currency in circulation (as it has not significantly deteriorated from previous levels – see chart above), but rather that the money supply has increased significantly since the CBN's unorthodox practice of 'ways and means' lending under Buhari's administration, which simply put, involves printing new monies and lending to the federal government. Recently, the government has securitised these loans, but we don't think it will mark an end to to the "ways and means" advances. 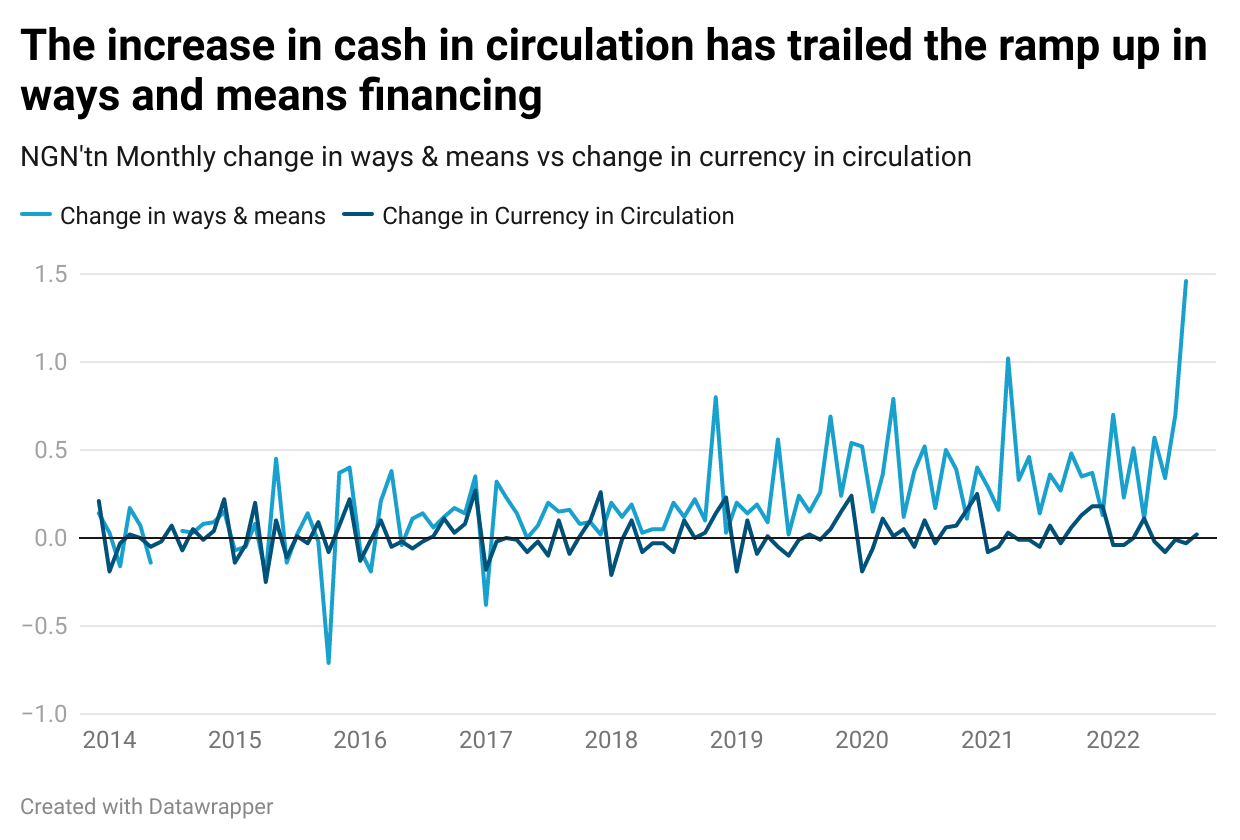 We have previously said that persistent backdoor funding to the government negates the effectiveness of the central bank's monetary policies. While redesigning the currency notes may not automatically grant potency to the CBN's monetary tools, reining in unbanked cash could help measures like the Cash Reserve Ratio (CRR) become more effective in curbing money supply (the CBN last increased the CRR by 500bps to 32.5% in September). It will also help against money laundering and malpractices, as corruption and criminal activities typically thrive in cash-based systems. This becomes more pertinent as Nigeria's general elections draw closer.

But taking a leaf out of India's demonetisation (2016) book, Nigeria could easily reverse the policy in the medium term. According to the Reserve Bank of India in its 2017-2018 annual report, "remonetisation efforts shifted into overdrive to engineer a quick recovery from the shock of demonetisation", which the central bank had to implement in less than 60 days. As a result, by March 2018, India's currency in circulation had surpassed its pre-demonetisation level.

Will the new notes help curb inflation and salvage the naira?

Nigeria’s inflation spiked to 20.8% in September (its highest level since 2005) with increased prices typically driven by cost-push factors, rather than money supply. A direct impact of the increased money in circulation is the depreciation of the naira (especially in the parallel market), which has led to a rise in imported inflation. By having more banked cash, the CBN can control FX activities, especially with the bank's tight capital control measures. 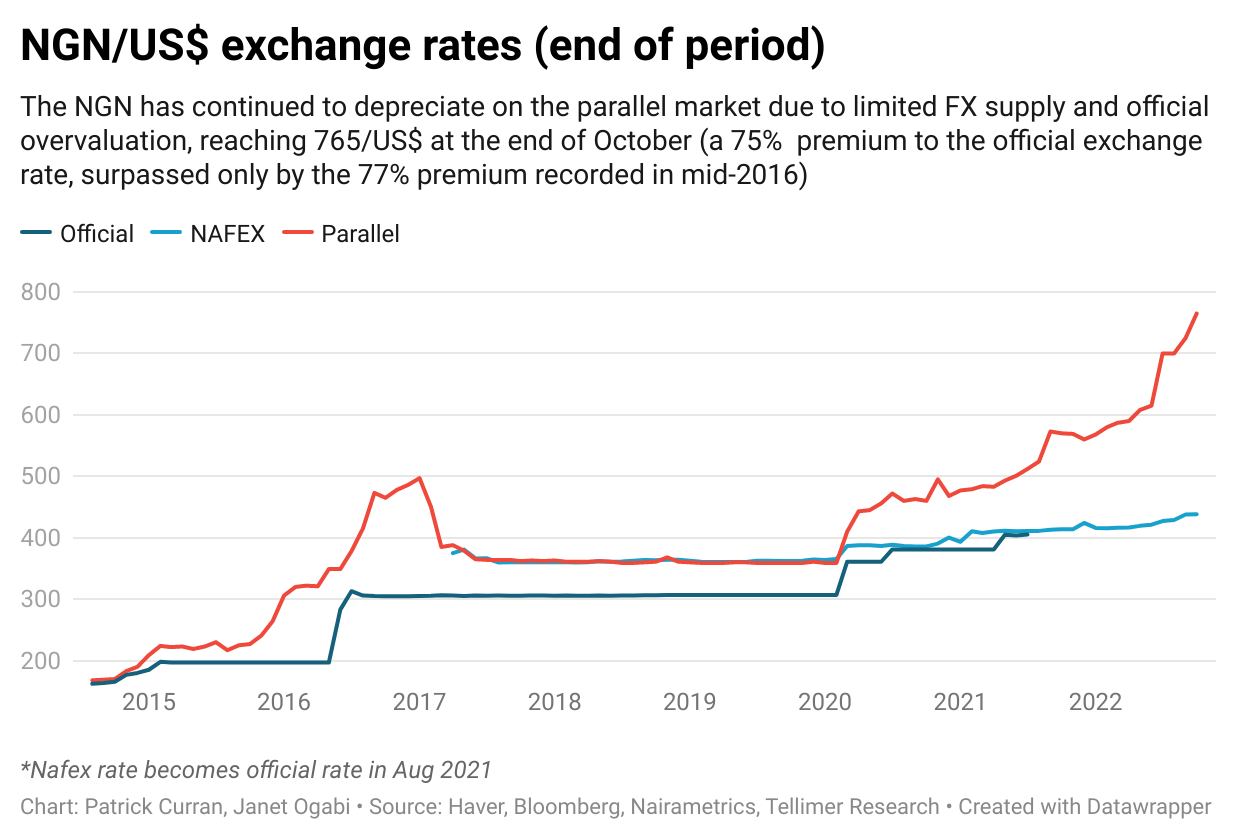 However, the short time frame for the implementation of the new notes (old notes expire on 31 January 2023) poses some risks to the naira in the short term, as hoarders of old notes will scramble to secure FX holdings. To mitigate this, Nigeria's anti-corruption commission (the Economic and Financial Crimes Commission or EFCC) has said that it will clamp down speculative activities on the naira and Bureaux de Change (BDC) operators that facilitate this outside of the stipulated guidelines. This will also be crucial especially going into the pre-election season as spending and campaigning have been rumoured to drive up US$ demand, as politicians look to the parallel market to fill their coffers before they take to the campaign trail.

Since the announcement, NGN/USD has depreciated to a new low of NGN775, compared to NGN755 on Tuesday in the parallel market. We reiterate our view that the fundamental challenges with the naira will remain, as dollar supply remains low due to the decline in oil revenues and lack of foreign portfolio investors’ funds, while FX demand continues to rise.

Scope for more bank deposits, but not a game-changer

As of March 2022, Nigerian banks' total LCY deposits stood at NGN31tn from NGN17tn in October 2019, after the bifurcation of the open market operation (OMO) and treasury bills market (when domestic, non-bank investors were excluded from trading OMO bills) led to a spike in system liquidity and unattractive investments yields.

The CBN's demonetisation plans to increase "banked cash" will be positive for banks, but it is unlikely to be a game-changer considering the total currencies outside banks (NGN3tn) makes up only 10% of total LCY deposits. And it is unlikely that all of the currency in circulation is brought in. 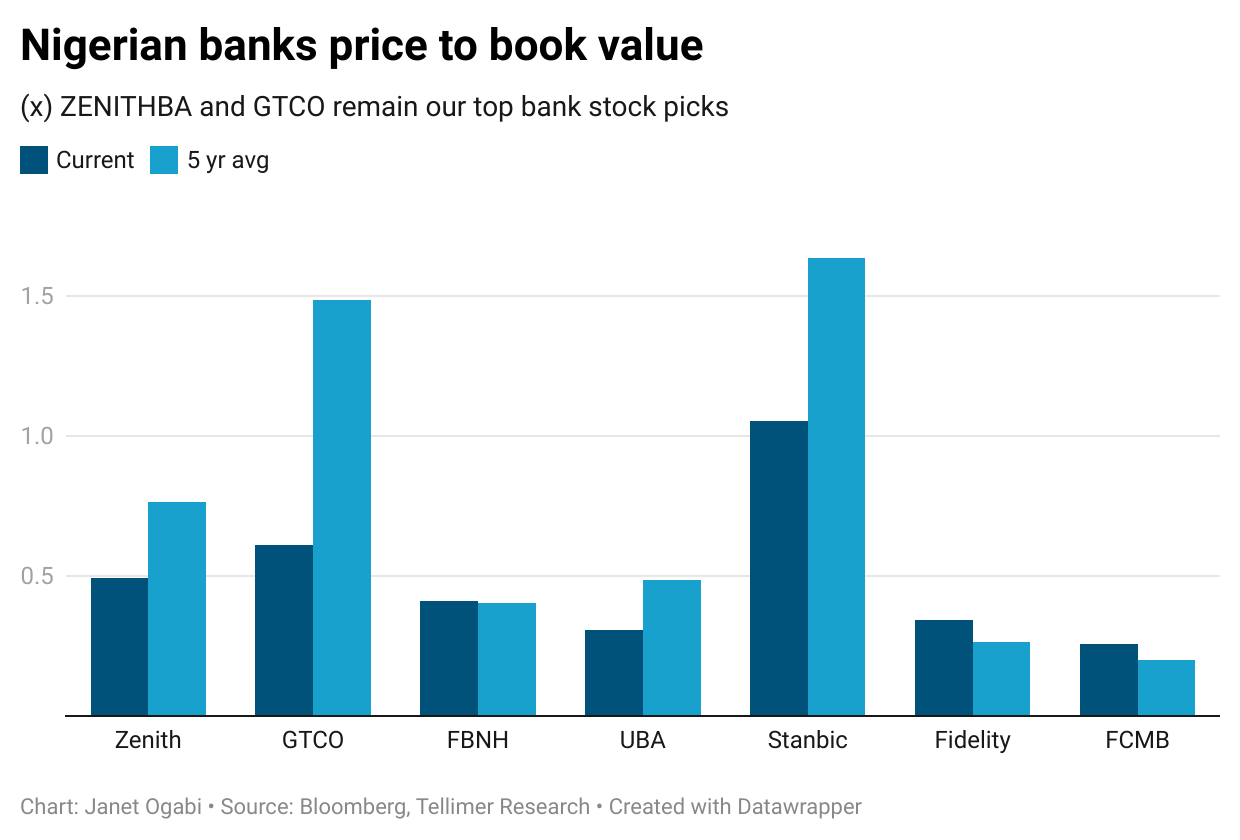