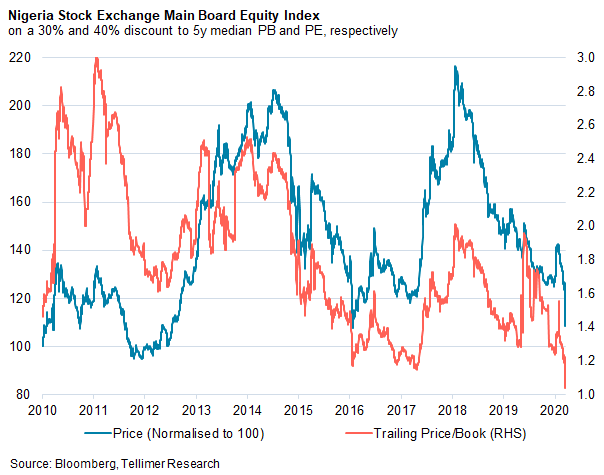 The 12 March 2020 statement from the central bank correctly points out that the coronavirus will reduce the import bill but it underplays, in our view, the potential for inflows of US$ to remain depressed for even longer given the oil price war initiated by Saudi Arabia and Russia; a war that both can fight for longer than Nigeria can defend the Naira without bringing in quasi capital controls.

Nigeria is incredibly tempting, but not until the risk of capital controls is off the table

The valuation of Nigeria equities discount a lot of of risk on devaluation, growth, reform, and security. But we may be heading back to a period of quasi-capital controls, rather than an upfront devaluation.

Until that uncertainty clears, there are other oil exporter plays (not to mention oil importers), which have also de-rated in the recent global sell-off (albeit they neither started nor have ended up at such a point of cheap value on an absolute basis).

And those oil exporter peers either have a defensible currency (because of very deep sovereign wealth, eg in the rich parts of the GCC like Abu Dhabi, Kuwait, Qatar, Saudi), or have a flexible currency which is already adjusting (Colombia, Kazakhstan, Russia).

The context of coronavirus, oil price collapse, and global sell-off

In general, our view for portfolio managers restricted to small emerging and frontier equity asset class (ie those who do not have a choice between cash, commodities, bonds, equities etc.), is that the risk of disruption from both the coronavirus and the oil price collapse is so universal (when direct and indirect implications are considered) that realistically, there aren't any net winners or relative safe havens and that, therefore, it should be disregarded as a portfolio decision variable.

This applies to Nigerian equities: if you liked or disliked the investment case (relative to the EM and FM equity universe) a month ago, then that assessment should stand today.

However, we have received so many incoming questions on Nigeria that we think it worthwhile to consider:

(1) The enduring focus on Nigeria

The focus on Nigeria is one sense perplexing because it is a small, illiquid market, even by the standards of small EM and FM. Perhaps Nigeria still attracts this attention because it is the epitome of a fallen angel in small EM and FM: a beloved off-benchmark bet for mainstream EM investors and absolute return hedge funds and family offices, a large weight in FM portfolios and an attractive option for domestic fund managers in two periods, in particular:

(i) early 2005 to early 2008: pre-global financial crisis backdrop and during an oil price boom;

(ii) mid-2009 to mid-2014: structural reform of the banking sector under central bank governor Sanusi and during a period of oil price recovery.

Although equity performance has witnessed periods of positive performance in recent years, eg in 2017 when oil output recovered after a period of militant disruption, value traded faded substantially (and has never recovered since). Off-benchmark foreign investors were left scarred by the devaluation and, more importantly, capital controls, in effect particularly during the 2015-2017 period post-oil price collapse, which inhibited any effort to liquidate and repatriate previous positions, and seemingly lost interest. Domestic investors found less risky returns in local currency debt more attractive than equities, with inflation, policy rates and government financing needs all high. And dedicated, actively managed FM (or pan-Africa ex-SA) equity investors saw such severe fund redemption that their enthusiasm for cheap valuations was overwhelmed by consistent selling of legacy positions by much larger off-benchmark foreign investors.

The reason why Nigeria is attracting attention, amid a global sell-off, is that while most of the off-benchmark investors have fully exited, the country remains the largest in Africa by population and GDP. Most of these off-benchmark portfolio managers (and, anecdotally, we observe that many of them have retained their jobs with the same firm, more often than their peers in the dedicated FM funds over the last decade) retain a working knowledge of Nigeria and, more importantly, trading and custodian access to and compliance clearance for Nigeria. This is not the case with some of the other, arguably more compelling parts of FM, like Bangladesh or Vietnam.

(a) A deeply pessimistic consensus view, which may imply greater sensitivity to positive, rather than additional negative, news; this is demonstrated by very cheap valuation on an absolute basis and relative to history (even if the multiples mentioned above are adjusted for a scenario where the FX rate devalues 20-30%);

(b) Very large population (over 200mn), a youthful demographic bias (45% below the age of 15), and a majority concentrated in the low income segment (GDP per capita of about US$2,200) implies high growth potential and economies of scale (high returns on capital) for successful companies;

(c) Potential to for structural improvement of the supply side of the economy in terms of health (life expectancy is merely 53 years, health expenditure as a percentage of GDP is merely 3.6%), education (secondary school enrollment is merely 42%), infrastructure (merely 59% of the population has access to electricity and annual consumption of electricity is merely 140kWh per capita), and ease of doing business (Nigeria ranks merely 131st out of 190 globally, albeit its score has improved almost 20% over the last 5 years);

(e) Consolidation of some of the weaker listed corporates (eg the acquisition of Diamond by Access in the banks sector in 2019);

(f) Broadening sector exposure via public equities (eg the listing of MTN Nigeria in telecom in 2019);

(g) Political stability until at least the run-up to the next election (February 2023), with President Buhari in his second term and his political party (APC) enjoying majorities in both the lower (58%) and upper (57%) of parliament and among the regional governors (53%);

(h) Potential to address vulnerabilities on the fiscal account (a deficit of about 5% of GDP) through structural reform of tax collection (tax as a percentage of GDP is merely c6%); and

(i) Re-established cooperation with militants in the Niger Delta, which has led to a sustained recovery in oil output (average output in 2019 was up 7% versus 2018 and up 16% versus the low of 2016).

(a) Low oil price for an extended period;

(f) Sluggish pick-up in import substitution (because of bottlenecks in electricity and skill levels, long lead times for industrial capex);

(h) Reduced incentive for foreign oil companies to develop new lines of production (with an increasingly less favourable tax regime for on and offshore activity);

(i) Handover of the Presidential role back to the South (potential return of militancy in the Delta to ensure this happens) as the next election approaches (February 2023);

(j) Potential fragmentation of the APC in the scenario where President Buhari is incapacitated;

(k) Potential increase in insecurity spillover and military spend (merely 0.5% of GDP) from the disruption in the Sahel region of west Africa; and

(5) Screen of Nigerian stocks: All of them exhibit cheap valuation 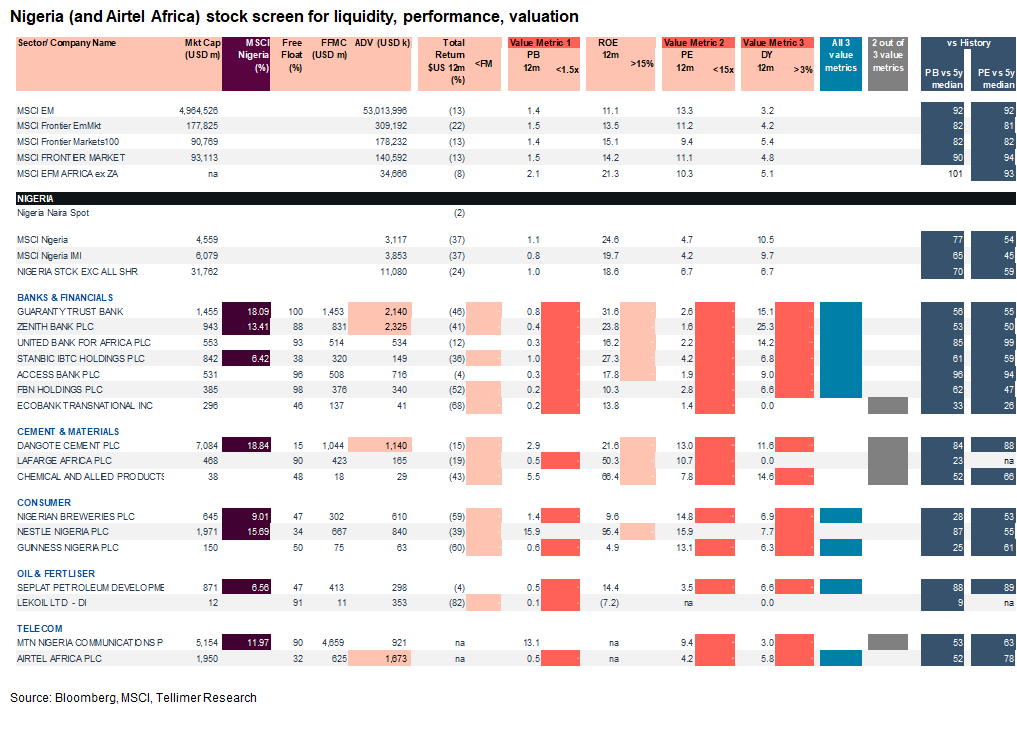