This week investors struggled to understand Nigeria's minister of finance Zainab Ahmed's "debt restructuring and negotiation" plans, which many misconstrued to mean that a debt default was imminent. Ahmed clarified that the plans are to re-profile the debt (technically still a form of restructuring) by extending the debt maturity, but not before jitters drove sell-offs in the eurobond market.

Raging floods across Nigeria and other parts of western and central Africa are displacing many from their homes, raising food security concerns that could extend pressure on already-high food prices. This could further curb central banks' efforts to rein in inflation.

In Ghana, as the IMF concluded its recent staff visit to continue programme discussions, the Bank of Ghana doubled down on its efforts to curb inflation by hiking rates by 250bps to 24.5%. However, Ghana's policy real return remains negative, as inflation increased to 37.2%. In response, Ghana Statistical Service has announced plans to rebase inflation, which could cosmetically drive inflation down, like it did in 2019.

Also this week, the IMF released its updated world economic outlook report, which showed a downward revision to growth in Sub-Saharan Africa to 3.7% in 2023, albeit still higher than the global growth projection of 2.7%.

DR Congo, Equatorial Guinea, Cote d'Ivoire and Kenya are expected to record the fastest growth in 2022. Of note, Senegal's growth rate is expected to jump by 340bps in 2023 to 8.4%, as the country gets ready to deliver its first gas supply. 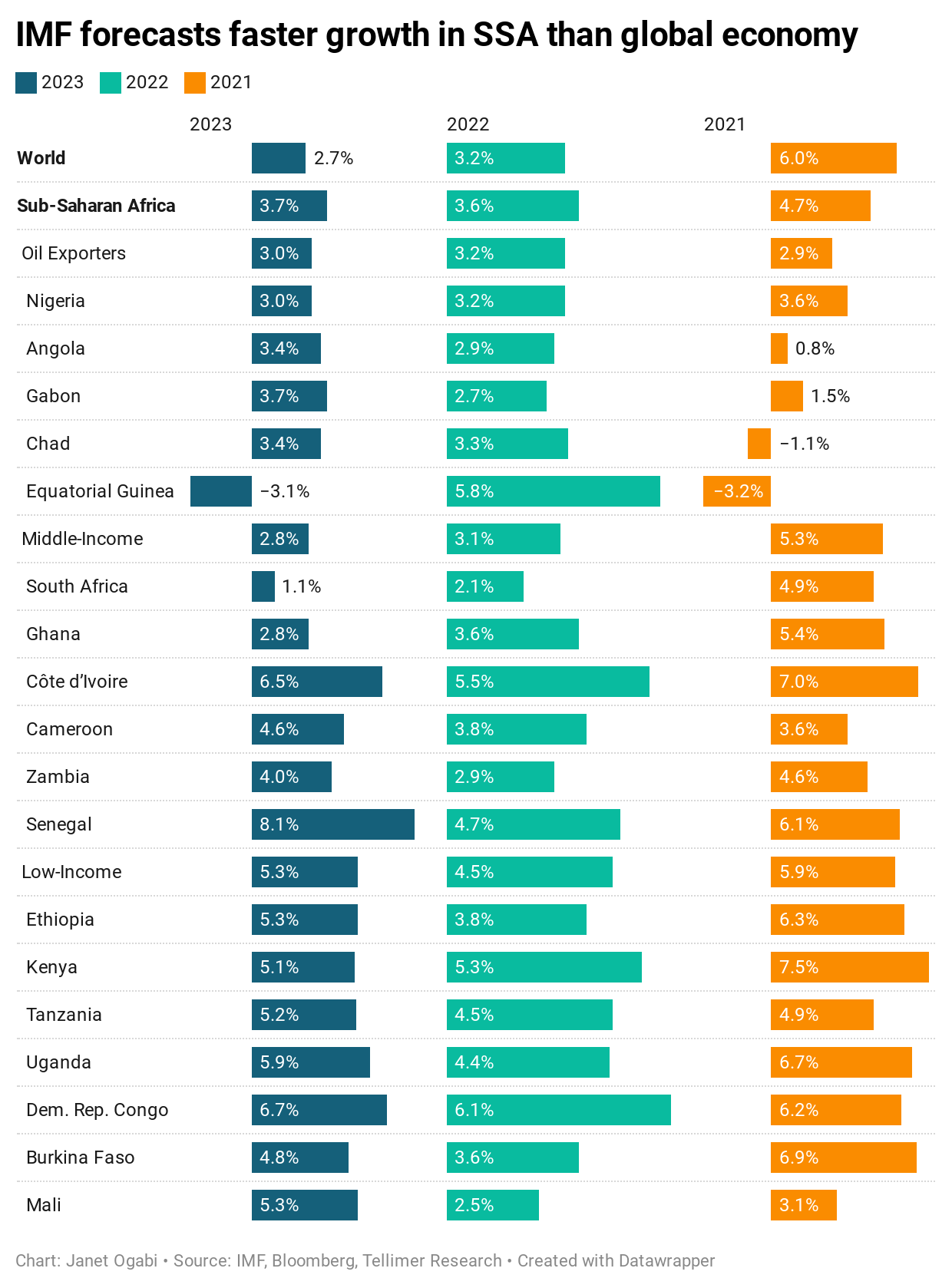 The IMF concluded its consultation meetings in Ghana last week, following discussions on the country's request for a US$3bn loan financing. The Fund issued a statement on 7 October following the conclusion of its staff visit. The statement contained no surprises, but nor would we have expected it to.

Discussions will continue in coming weeks, including during the IMF/World Bank Annual Meetings, along with technical work. This will include making further progress on assessing Ghana’s debt sustainability.

To coincide with the end of the IMF visit, the Bank of Ghana decided to postpone its interest rate meeting to October 7, where it hiked rates by 250bps to 24.5% – 150bps higher than expected. Meanwhile, inflation continues to surge with September inflation data released this week printing 330bps higher month-on-month to 37.2% – the highest since 2011. Consumer prices also continue to rise while Ghana's real policy rates remain negative, despite the apex bank's cumulative 10ppts of hikes so far this year – second only to Zimbabwe in Africa.

In response to rising inflation, Ghana's statistics agency has announced that it will rebase the inflation reference year from 2018 to 2021 and increase the inflation basket composition from 10 to 16. Similar to 2019, this will cosmetically help bring down inflation, perhaps closer to the central bank's target of 8%.

Despite the ongoing concerns on Ghana's fiscal position, we maintain our Buy on GHANA '32s – we think prices are well below expected recovery values in plausible restructuring scenarios. 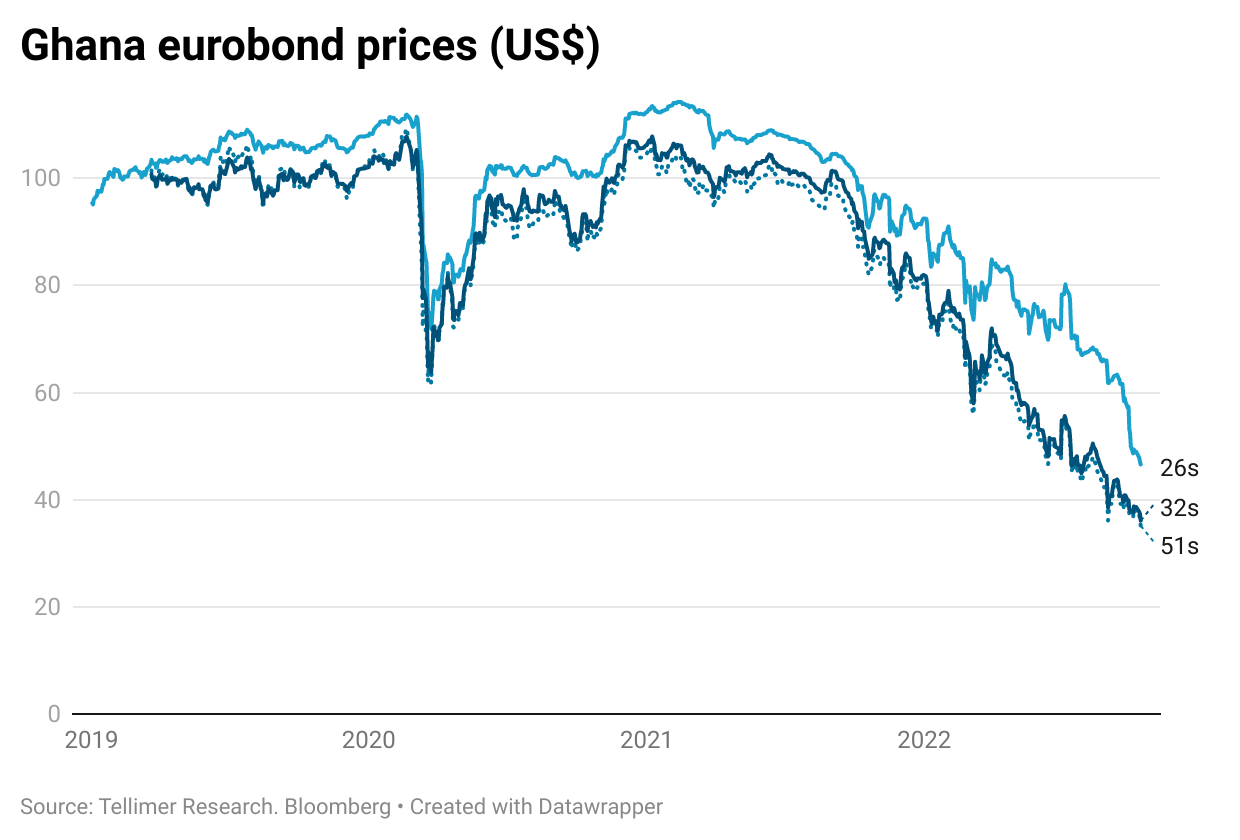 Nigeria's minister of finance Zainab Ahmed said in an interview with Bloomberg at the ongoing IMF/World Bank meetings that the government is considering restructuring its debt and extending the repayment period of its credit obligations. She also said that "the government plans to refinance domestic debt obligations that are due this year and next, while the country’s NGN20tn (US$45.4bn) in outstanding borrowings from the central bank will be bundled into government bonds."

Ahmed's comments left investors jittery, with confusion over her restructuring plans and if it meant that a debt default was imminent. Nigeria's 2032 and 2051 eurobond prices dropped on the news to US$63.9 and US$57.1 on Thursday, from US$66.3 and US$59.7 the previous day. 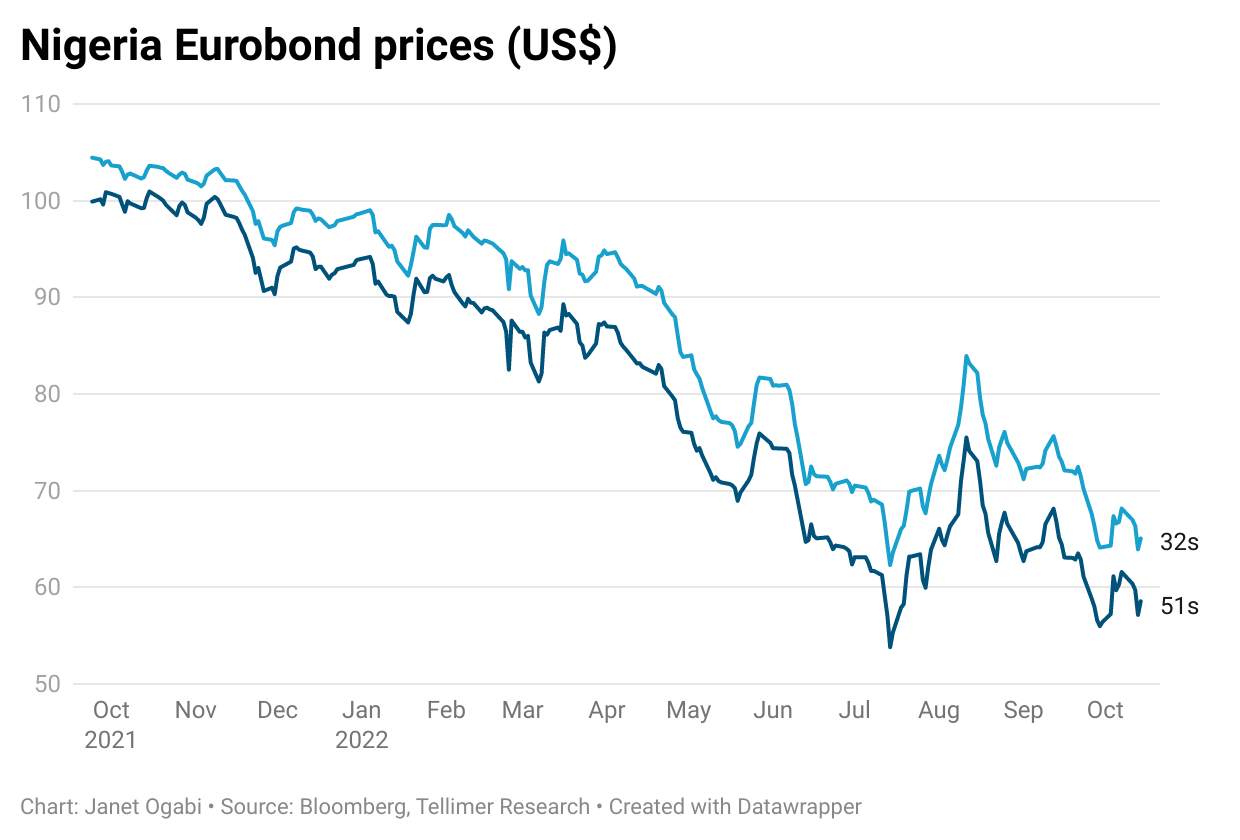 In response, the government issued a statement clarifying that this did not translate to any risk of a debt default, but instead involved "re-profiling of debt maturities by refinancing short-term debt using long-term debt". The government has assured investors that it would "meet all its debt obligations.”

Flooding across Africa could worsen food insecurity and inflation

Floods caused by abundant rains and poor infrastructure have affected large areas of western and central Africa recently. In Nigeria, flooding has been reported in its borders with Niger, Chad, and Cameroon that have affected millions of people. Floods have also been reported in neighbouring Senegal and Cote d'Ivoire. 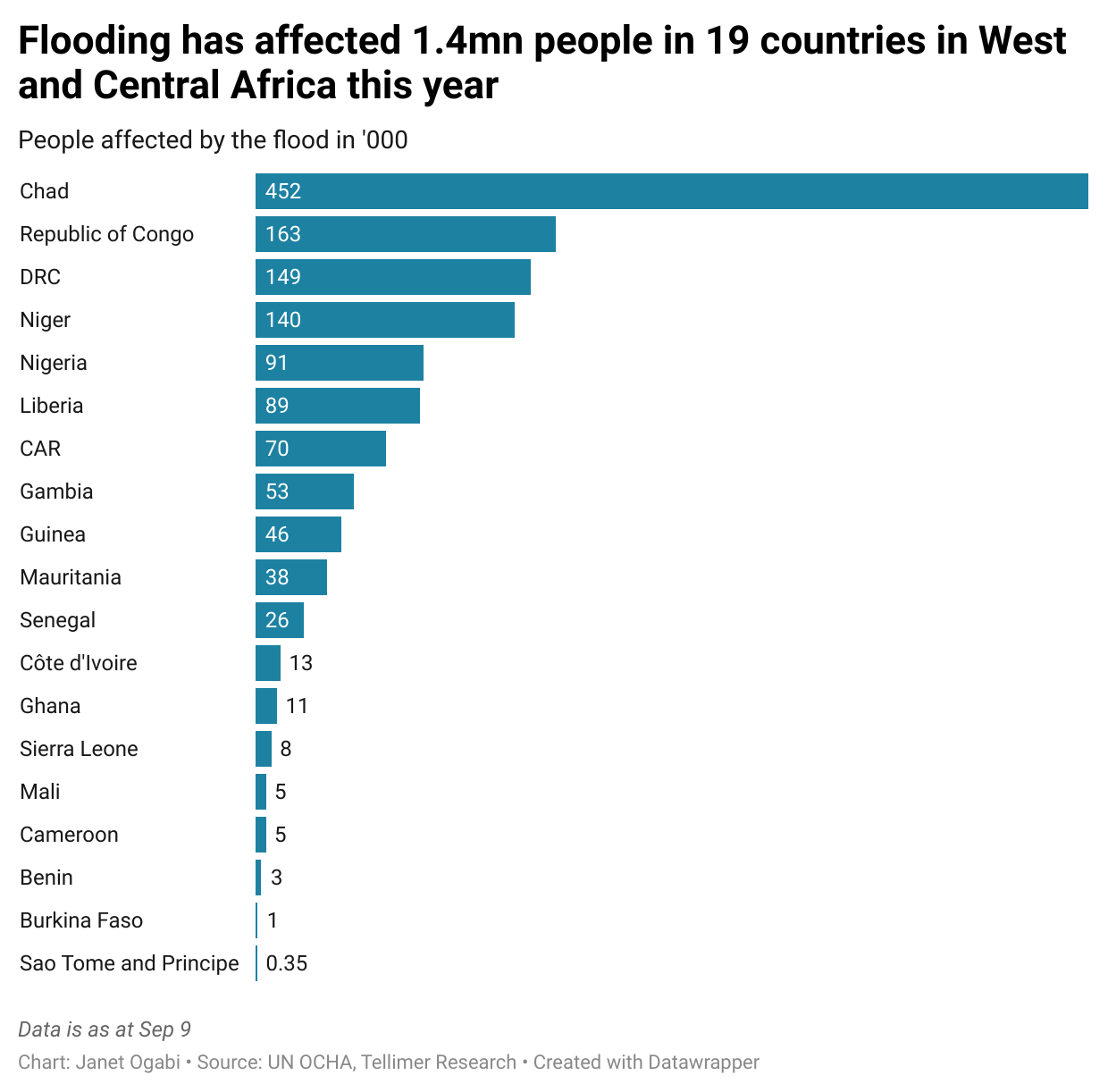 The most affected areas – especially in Cameroon and Nigeria – are agricultural areas that supply the majority of food in the region. For instance, in Nigeria's Nassarawa (north central) state, Olam – one of Nigeria's biggest agri-businesses – reported that its 4,500 hectare rice farm has been submerged. This increases the risk of food insecurity as farm yields are likely to drop placing further pressure on already-high inflation even as central banks try to rein in rising prices.

Consensus estimates show inflation will increase to 21.6% from 20.5%. Nigeria's inflation hit its highest level since 2005 in August, at 20.5% amid increased food prices and a deteriorating naira.

Nigeria's equities market pared some of the previous week's losses, with a gain of 0.6% over the past week. This brings the year-to-date gain to 11%. Market breadth remained negative with 27 losers and only 21 gainers. The gain during the week was sparked by investor interest in BUACEMENT, MTNN and UBA, while sell-offs occured in Seplat, as well as the newly listed power company, Geregu.

As interest rates pick up, local Nigerian investors are likely to exit the equities market, which explains the losing streak. Looking ahead, we expect interest in the Nigerian market to remain tepid. 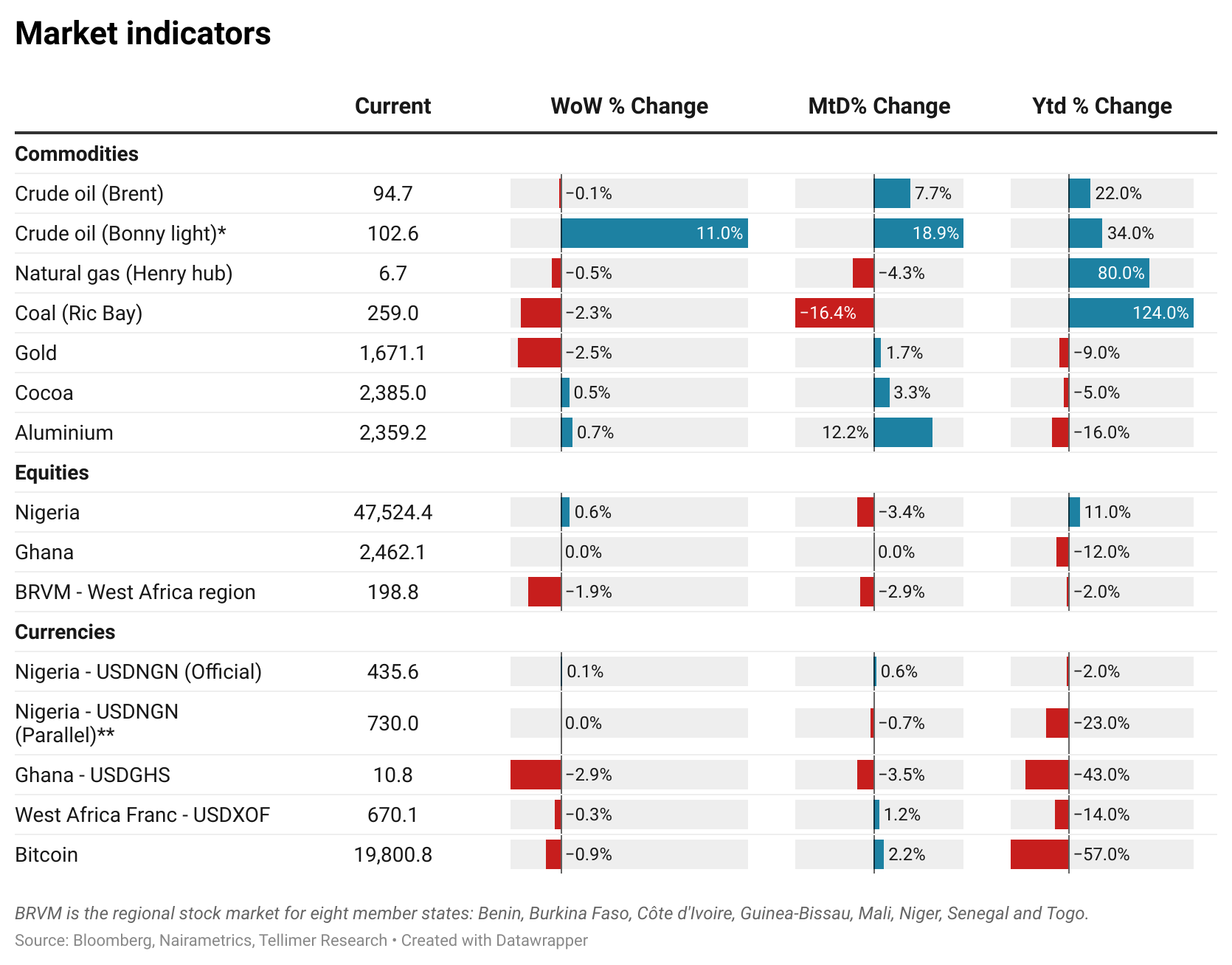 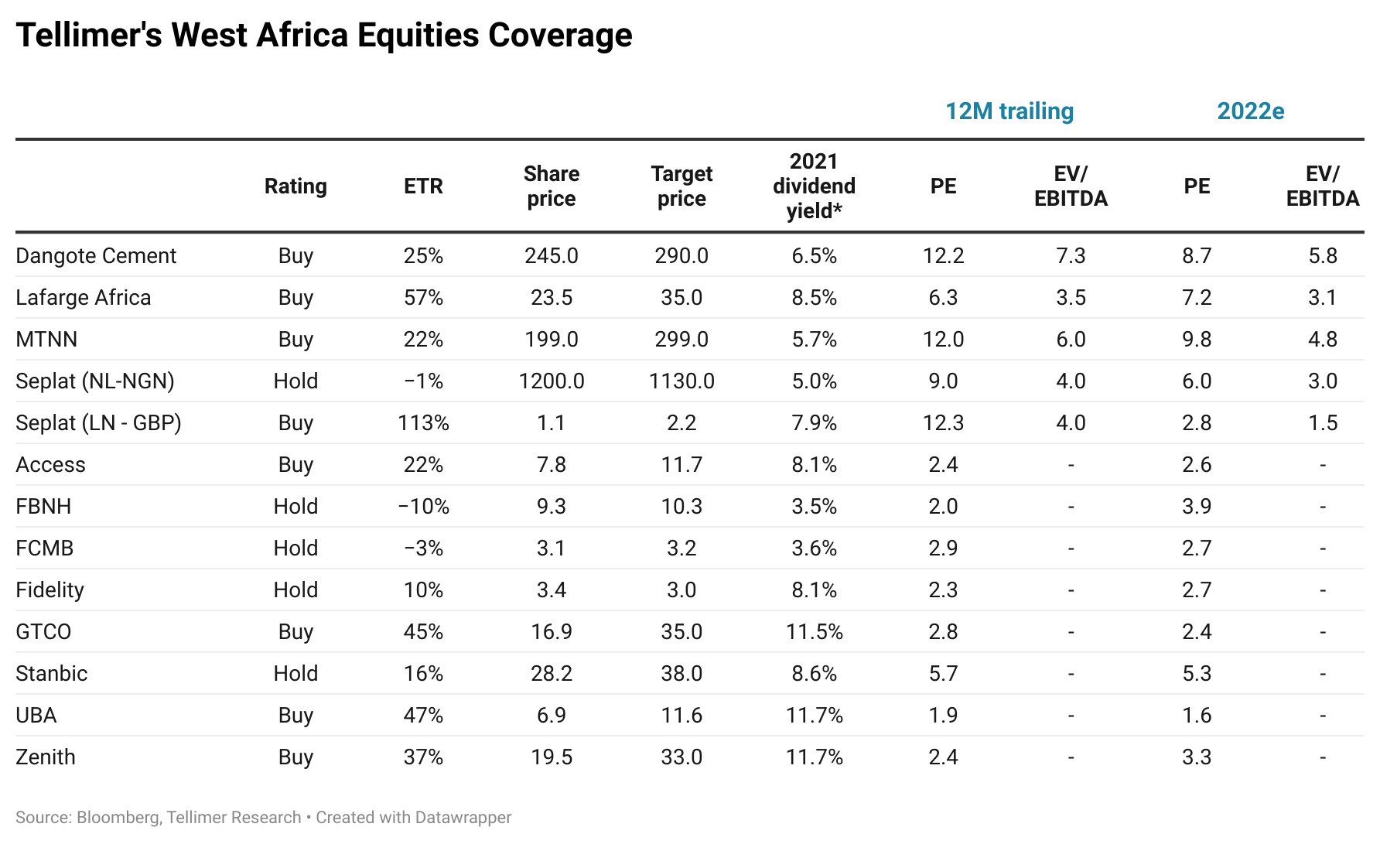 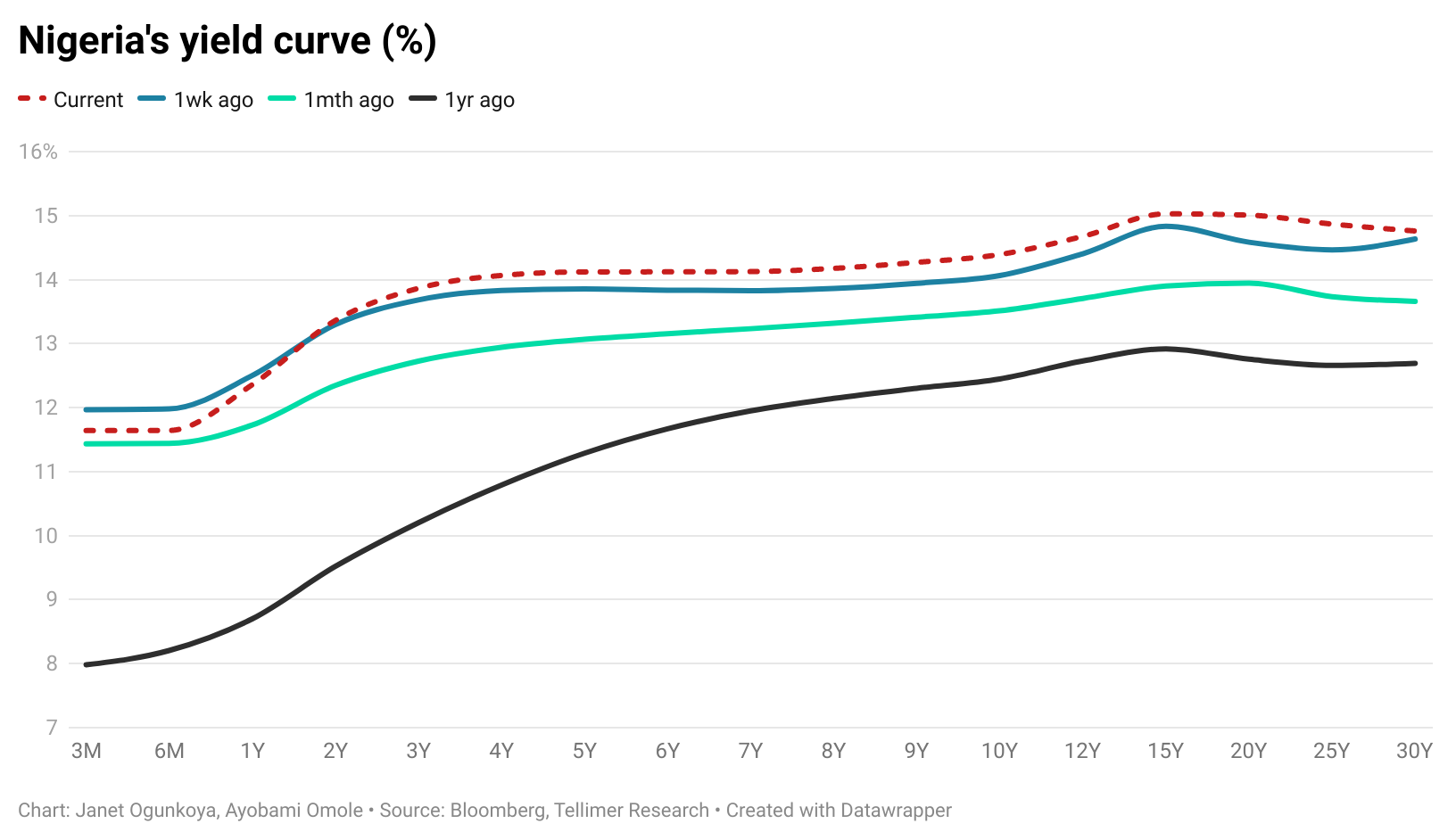 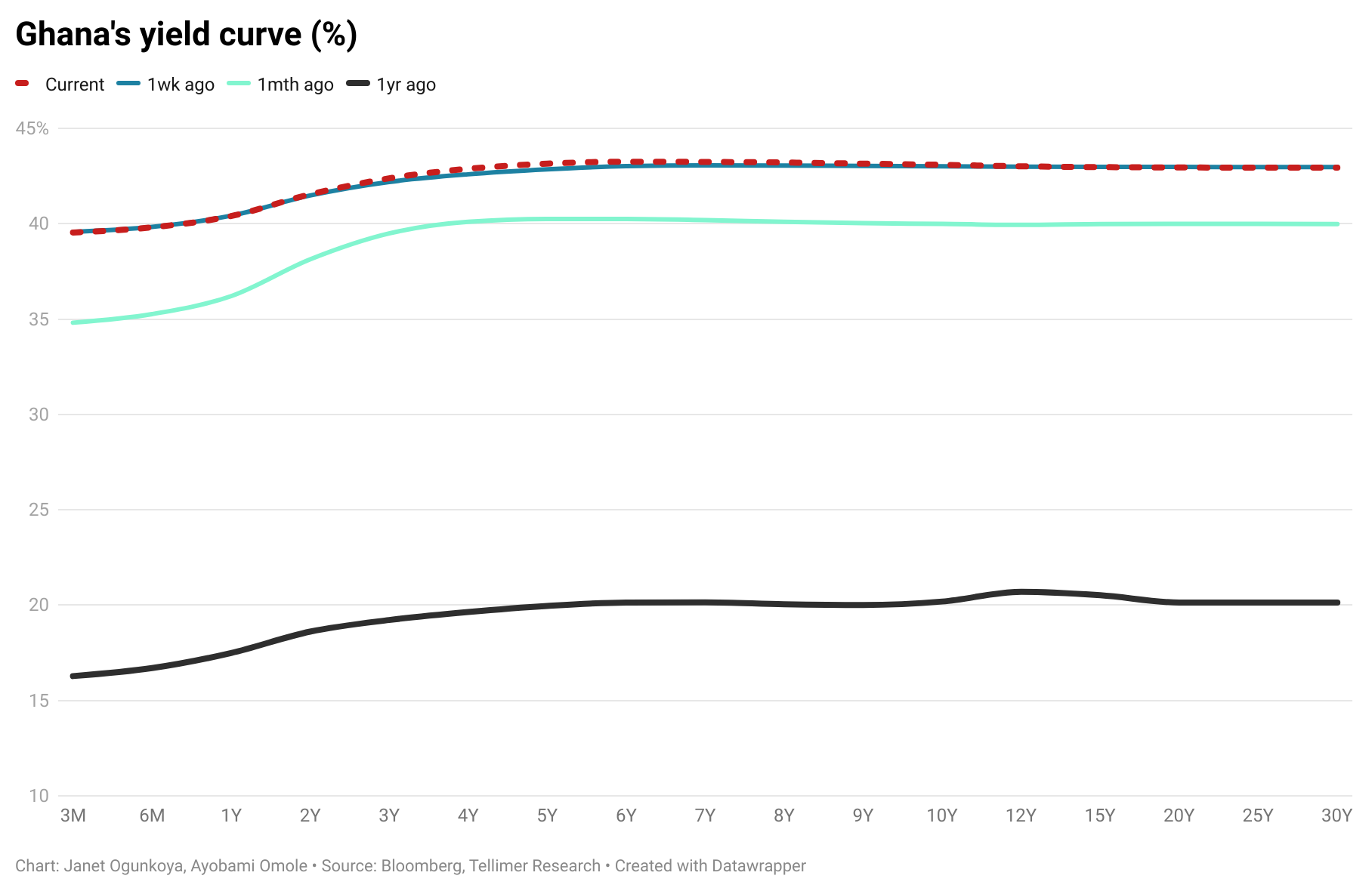