11 May 2022
Published by
Tellimer Research

Nigeria caves in to airlines on jet fuel subsidies

Nigerian government officials met on 9 May with members of the Airline Operators of Nigeria (AON) group in a bid to resolve the issue of the rising cost of jet fuel. High prices had forced operators to announce plans to shut down domestic flights from 9 May, but the airlines suspended their plans in light of the talks with the government.

According to AON, the price of jet fuel (Jet-A1), which is deregulated and determined by market forces, had increased from NGN250/litre in January to NGN700/litre. This led to a spike in operating costs for airlines, with each seat costing as much as NGN120,000, according to an AON representative. For comparison, the average seat (economy class) sells for NGN50,000.

At the government-AON meeting, members of parliament along with the leaders of the state oil firm, the Nigerian National Petroleum Corporation (NNPC), Mele Kyari, and the central bank, Godwin Emiefele, reached an agreement that the NNPC would supply Jet-A1 to nominated oil marketing firms for three months at NGN480/litre.

During the three-month subsidy period, the airlines will apply for jet fuel import licenses so they can import directly, avoiding the need to rely on the NNPC and cutting out the middlemen (the oil marketing firms).

Although this is good news for the airline operators, they will now be thinking about what will happen after the three-month subsidy period expires. The spike in jet fuel prices has been a cause for concern globally and is a fallout of the Russia-Ukraine war, which has lowered the supply of feedstock for refineries globally. China and others have also cut their exports of refined products.

As summer approaches, BloombergNEF projects that global jet fuel demand could rise by more than one-third as air travel ramps up. Thus, even if airline operators are granted import licenses for jet fuel, they will still need to optimise operations to accommodate the increase in operating costs. Operators have stated that there are limits to how much they can pass the costs on to customers, which could lead to an increase in the average cost of an economy class seat to as much as NGN150,000 – 3x current prices – according to AON reps. 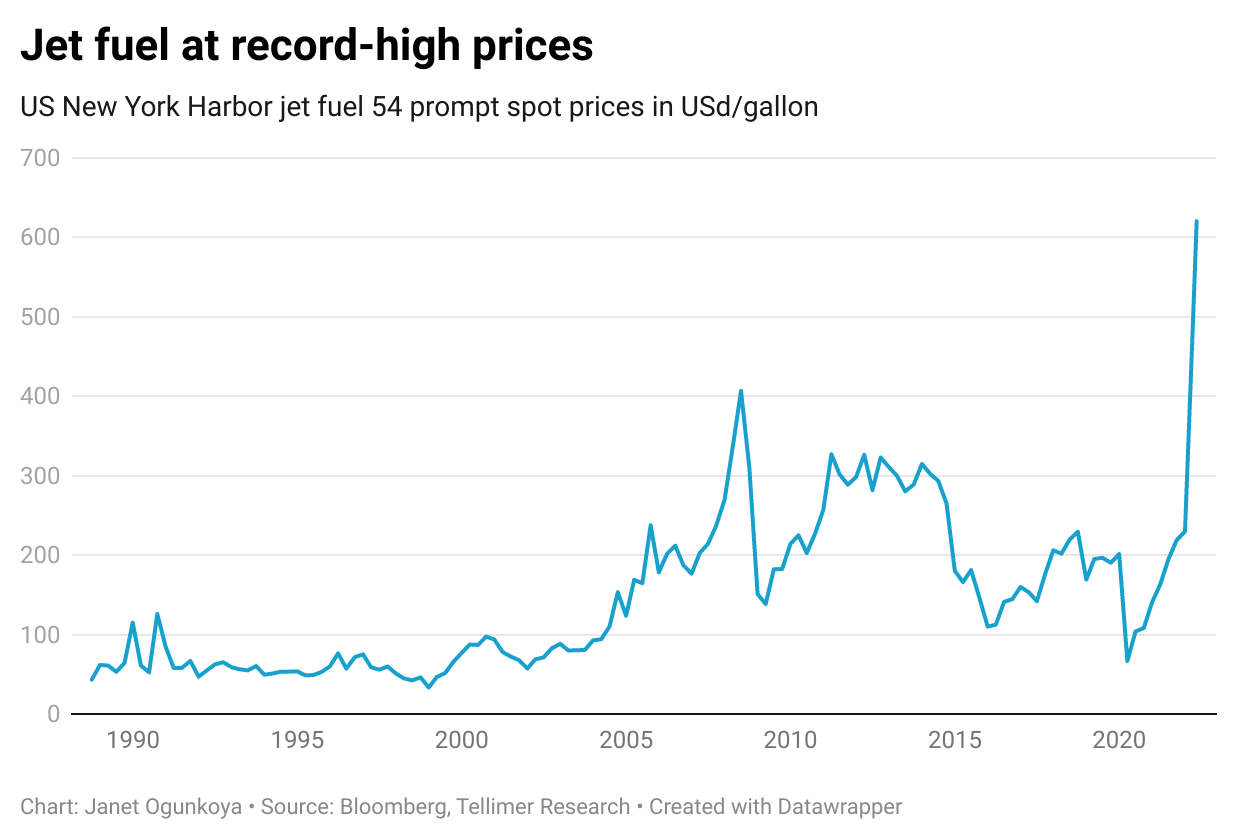 The risk is that airlines could go bankrupt, with far-reaching effects for Nigeria's economy in terms of job losses and even bank troubles. Transportation and storage – which includes air transport, based on the central bank's credit portfolio classification – makes up 3% of the loan exposure of Nigerian banks. This translates to NGN774bn of a total of NGN25tn of bank loans as of the end of March. 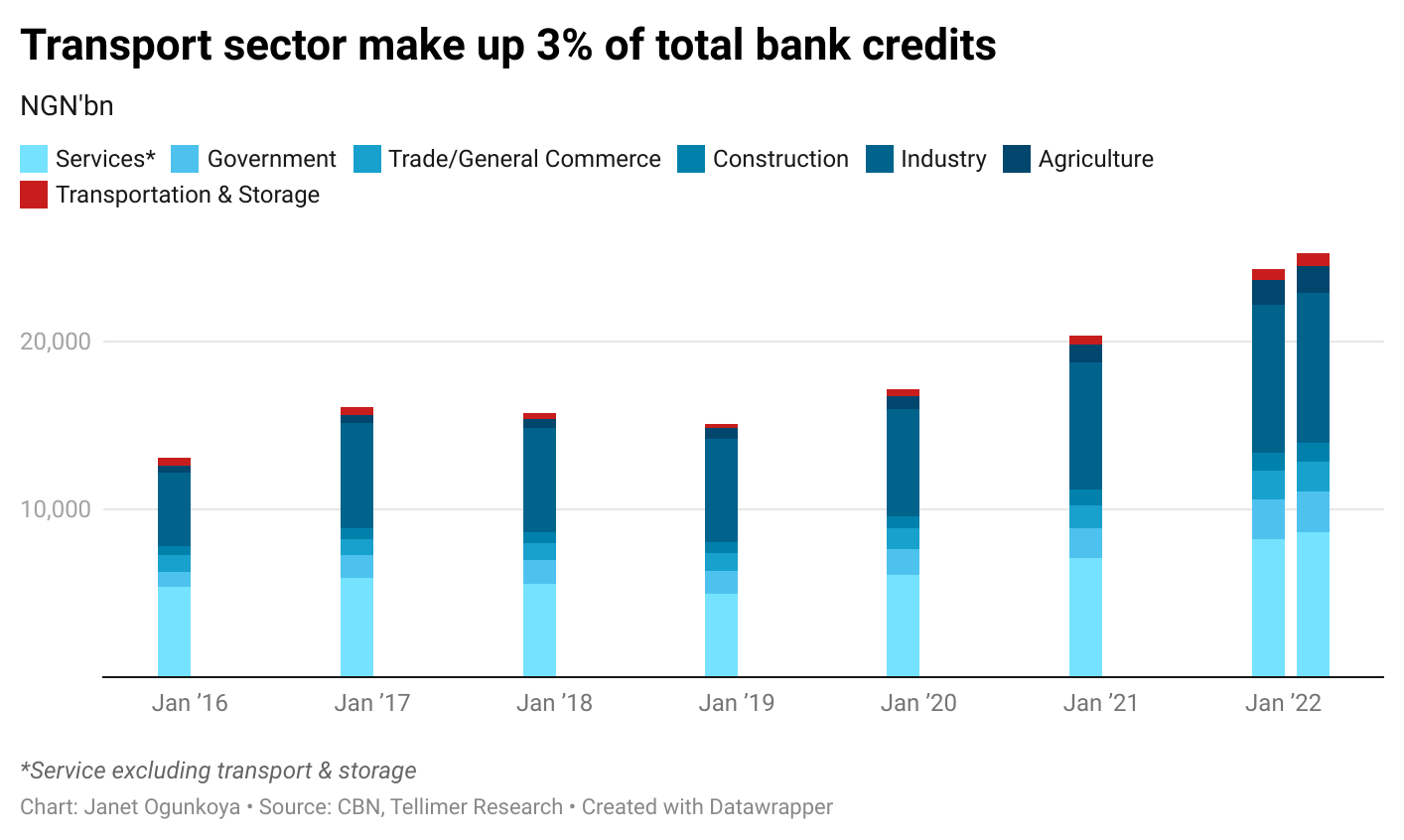 Disruption to airline operations or increased ticket prices would leave customers reliant on alternative means of interstate transportation — road or rail. According to National Bureau of Statistics data, there was an average of 15mn domestic air passengers (departures and arrivals) per year pre-Covid (in 2018 and 2019), although this slumped to c9mn in 2020.

Besides road and rail sometimes being less convenient, a major concern for consumers is the high risk of insecurity. If push comes to shove, Nigerians will have to brace for the impact that a possible spike in air travel costs (including cargo rates for goods) could have on inflation. As in many other countries, inflation has been rising rapidly since the start of the year due to increases in energy and food prices. 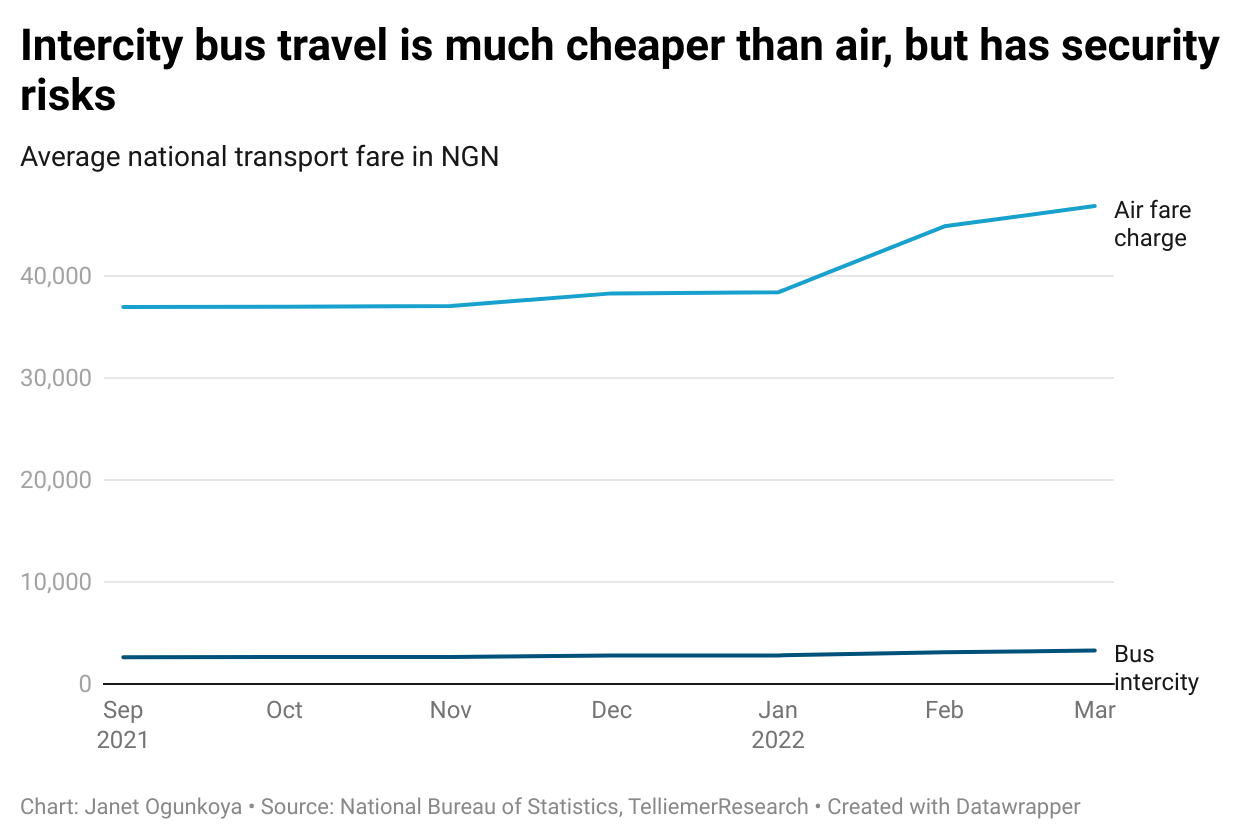 As we highlighted in our recent note, Nigeria has been caught up in the petrol (gasoline) subsidy web, which is making the increase in oil prices a curse for the continent's biggest crude producer rather than a blessing. Nigeria's record low production level (down from c2mn barrels per day to 1.4mn) is also preventing it from fully benefiting from US$100/barrel oil. 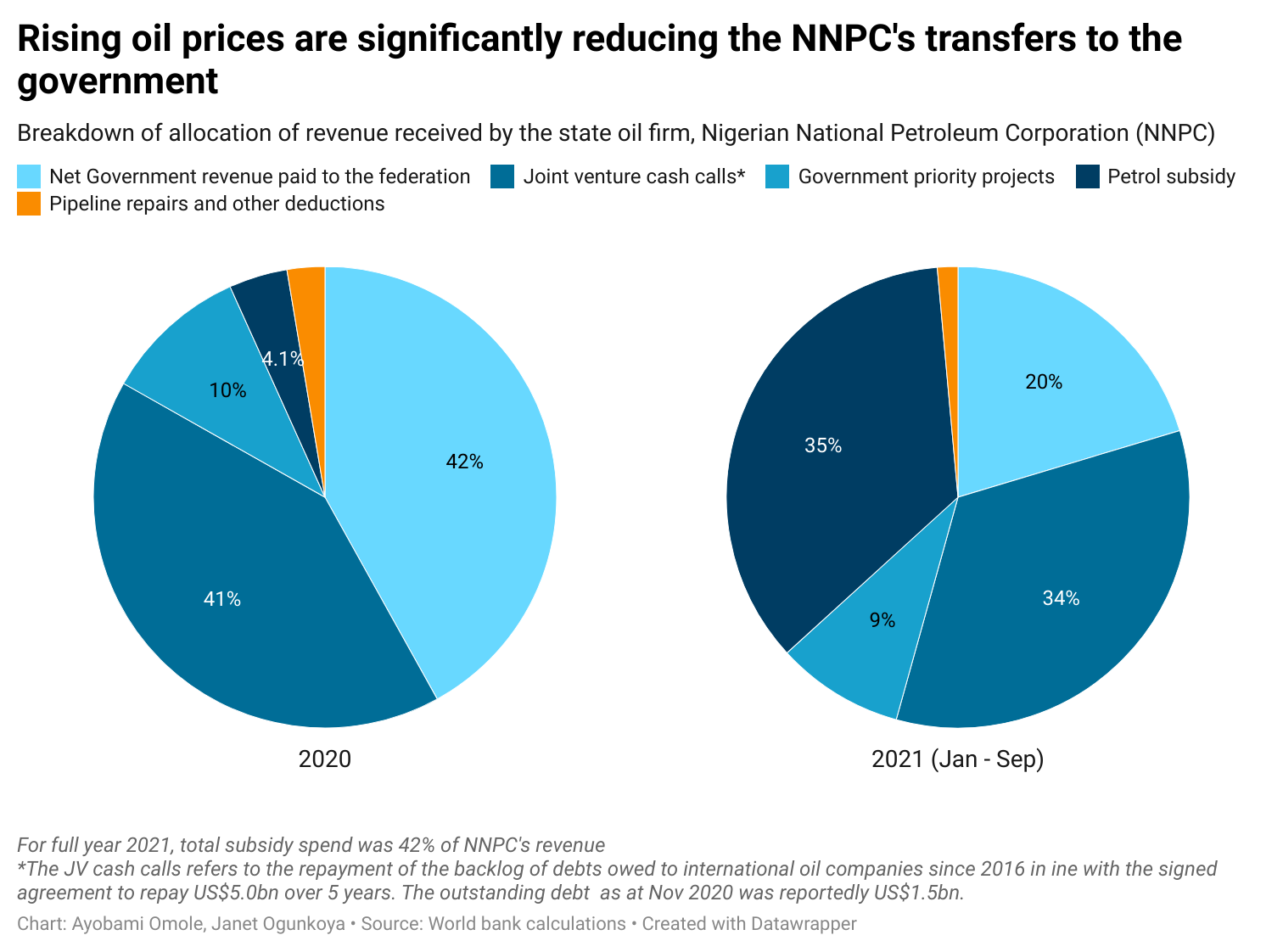 This only heightens the need for the Dangote Refinery to come to the rescue. The facility is expected to start operations in 2023 and will have the capacity to churn out 9mn litres of aviation turbine kerosene (ATK), more than covering Nigeria's average daily consumption of 3mn litres. Additional capacity from the government's Port Harcourt facility and regulated modular refineries will also boost the supply of petroleum products.

However, as we have noted before, the new/revived refineries will not completely shield end consumers from the global risks around the pricing of petroleum products. But weaning Nigeria off imported fuels would yield savings on logistics and shipping, and improve access to supply, especially in the face of declining refinery capacity (and, thus, supply) globally. 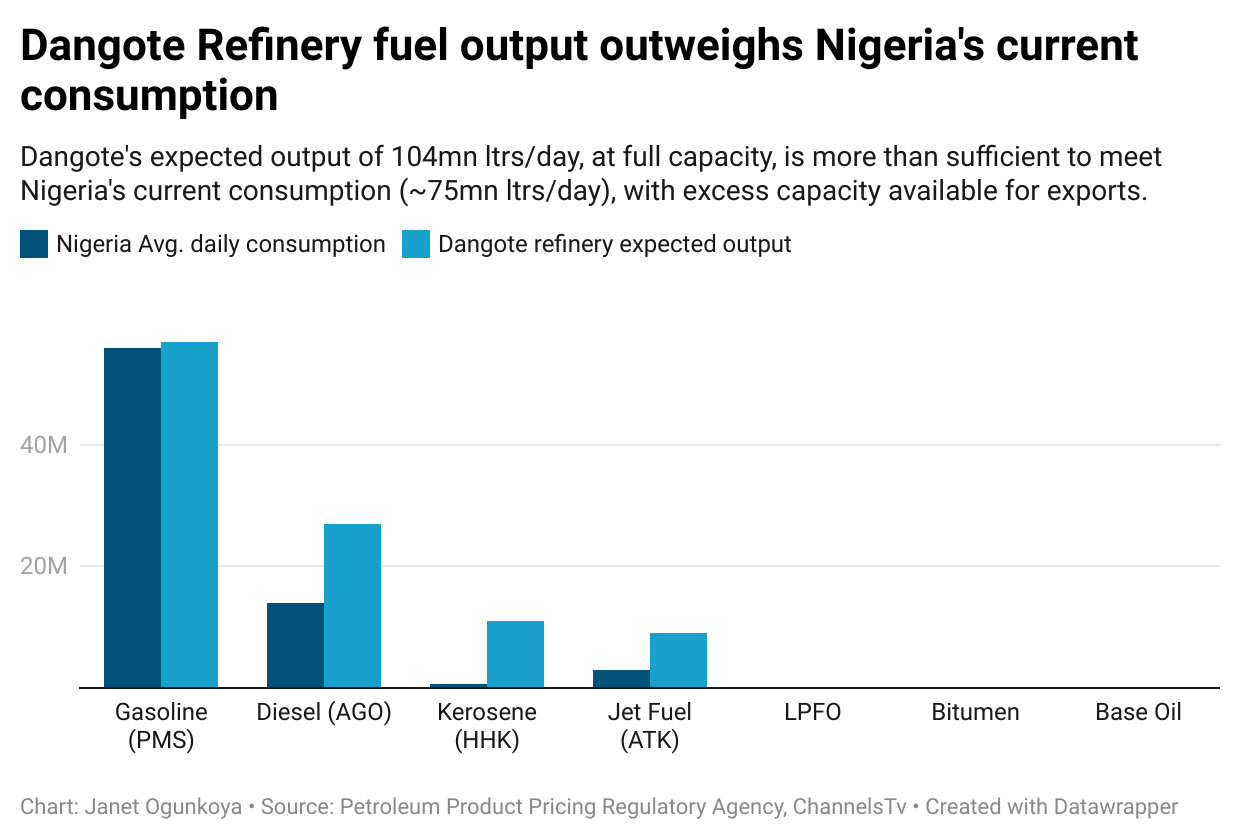