After a shortened and very quiet data week, the international calendar becomes a lot busier this week with a host of important releases to consider. US inflation is arguably one of the most important and will be released tomorrow, but the week also includes retail sales, industrial production and the Michigan consumer sentiment index. The combination will offer a fresh perspective on dynamics the Fed will consider in its decision-making process and whether a taper is justified before the year's end. Cleveland Fed President Mester again reiterated her view that she would favour the Fed tapering before the end of the year, to join a strong of her colleagues in arguing for the same.

Through the past week, the USD staged a recovery. It is not surprising given the retreat in equity markets that has raised overall levels of risk aversion, although it should be added that Wall St futures are moderately positive this morning at the time of writing. US inflation tomorrow will take centre stage, and anything higher than the 5.3% y/y anticipated could further boost the USD's performance. Technicals on the daily are non-committal and do not favour any outright direction one way or another. This may be in anticipation of the data this week and the bias it might generate.

In the commodity space, The US-based EIA released a new oil sector report last week and kept its average Brent price forecasts unchanged from July’s report. “We expect Brent prices will remain near current levels for the remainder of 2021, averaging $71 per barrel during the fourth quarter of 2021,” the EIA wrote while adding that “in 2022, we expect that growth in production from OPEC+, US tight oil and other non-OPEC countries will outpace slowing growth in global oil consumption and contribute to Brent prices declining to an annual average of $66 per barrel.” The organization also estimates that global oil consumption will rise to 101 million barrels per day in 2022, almost back at pre-COVID levels and about 4 million barrels more than what is estimated for 2021.

Morocco: King Mohammed VI on Friday appointed Morocco's National Rally of Independents (RNI) chief Aziz Akhannouch as the new Prime Minister and tasked him with forming a new government after his party won a majority in legislative elections held on Thursday. Akhannouch is also a fuel distribution tycoon and a longtime agriculture and fisheries minister. His party clinched 102 seats in the 395-seat House of Representatives, one of the two chambers of the bicameral legislature, and toppled the moderate Islamist Justice and Development Party (PJD), which won a paltry 13 seats.

West Africa States: On Friday, a West African delegation said its first meeting with the Guinean junta that toppled President Alpha Conde was "positive". According to the head of the commission Jean-Claude Brou, the delegation from ECOWAS also "had the opportunity to meet former President Conde". ECOWA'S initial statement is set to deescalate tensions after the 15-nation bloc initially threatened sanctions against Guinea over the military takeover. Guinea, the world's biggest exporter of bauxite, has since been suspended from the bloc. Brou declined to give more details about the meetings, saying the delegation still needed to report to ECOWAS heads of state. However, the official's reference to Conde as the country's "former" leader signals that Guinea's neighbours will not push to have the toppled leader reinstated.

Ethiopia: The United States has expressed grave concern about fighting in parts of Ethiopia and urged the Ethiopian government and rebellious forces from the Tigray region to start immediate negotiations to address the conflict. US State Department spokesman Ned Price was quoted as saying, "we urge the Ethiopian government and TPLF to enter at once into negotiations without preconditions toward a sustainable ceasefire. We condemn all such abuses against civilians in the  strongest possible terms and call on all parties to the conflict to respect human rights and comply with their obligations under international humanitarian law." The United Nations on Friday said that it had completed its joint investigation with Ethiopia's state-appointed human rights commission of abuses in the Tigray conflict, with a final report due on November 1.

Nigeria: The country's wealthiest state has passed legislation enabling it to collect value-added tax, further challenging the century government's control of a key source of revenue. Lagos governor Babajide Sanwo-Olu signed the bill into law on Friday. Residents and businesses in Lagos, Nigeria's commercial hub, are by far the biggest contributors of VAT in Nigeria. The Federal Inland Revenue Service currently administers the tax and then distributes 85% of the funds to state and local governments. While Lagos receives more VAT than the other states, it gets back less than it provides to the federal government.

South Africa: Some positive news over the weekend has followed with President Ramaphosa announcing last night that virus restrictions will be relaxed by one level from the government’s alert level three. Included in the changes, alcohol sales will now be permitted on Fridays, non-essential establishments such as bars and restaurants will be allowed to remain open until 10pm, with shortened curfew hours and increased sizes of gatherings permitted. The relaxation of ongoing restrictions, allowing more freedom of trade and economic activity, is undoubtedly positive for the broader economy and economic recovery underway. However, this will likely have only a marginal effect in the near term, especially given July’s domestic unrest.

Zambia: President Hakainde Hichilema has told lawmakers that the government will consult stakeholders in reviewing the mining tax policy framework. Hakainde added that the government will ensure that it receives a "fair share" from mineral wealth and that electricity tariffs reflect generation costs.  The government will ensure the stability of the sector, given it is set to play a key role in accelerating economic growth. Finally, Hakainde said that mining is a long-term business and Zambia cannot "change fiscal policies every other year." Stability in the sector will be key in helping the government reach its goal of more than trebling output. Note, copper producers have indicated that they are ready to start expansion projects worth $2bn in Zambia next year if the industry can reach an agreement on royalties with President Hichilema's administration.

Despite interventions by the Central Bank of Nigeria to stabilize the currency, the Nigerian Naira on the parallel market plunged to a fresh low on Friday. Specifically, the NGN traded at 545 to the dollar, according to Abokifx, an online platform that tracks the data. That was a spread of almost 33% from the official spot rate of 411.08 on Friday. 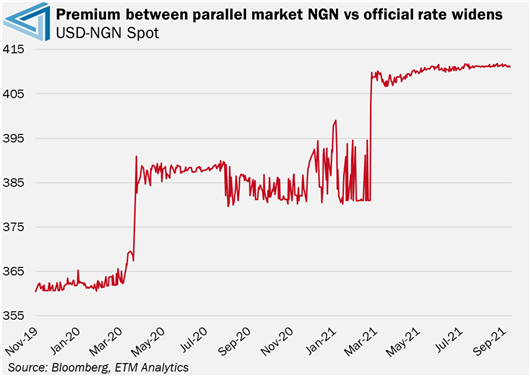 Following a move by the CBN to ration dollars, individuals and companies have had to rely on the parallel market for their foreign-exchange requirements. The banks’ plan to throttle the illegal market by banning the sale to money traders to reprimanding people who profit from the arbitrage doesn’t appear to be working, and dealers are speculating that the currency will weaken further. That said, some in the market see the country’s proposal to sell overseas bonds and the inflow of the International Monetary Fund’s special drawing rights as offering the CNB “a window of opportunity” to improve supply and end the arbitrage.

Nigeria is battling dollar shortages brought on by a period of low oil prices following disruptions linked to the COVID-19 pandemic. The central bank has devalued the currency three times since March 2020, but the Naira has continued to weaken. Even data showing that foreign-exchange reserves rose to $34.7bn on Thursday, a fourth-month has not helped. With dollars hard to come by, the NGN in the parallel market is seen as continuing to weaken in the week ahead.

Fiscal hawks will take comfort in the fact that Nigerian bond issuance has fallen sharply this year. Specifically, data compiled by Bloomberg showed that as of September 9, Nigeria had issued $16.2bn worth of sovereign bonds in 2021, marking a decline of 57% compared to the same period in 2020. Note that the dollar value of the bond sales is calculated using the exchange rate on the day of issuance. 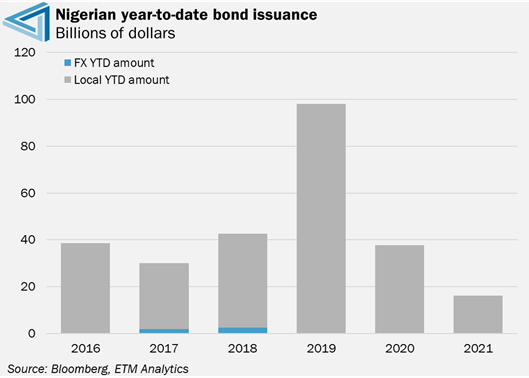 It is also worth noting that the bond issuance so far this year is significantly less than in 2019. The decreased issuance comes on the back of a solid rebound in international oil prices, which will be helping to prop up government revenues. Recall that the oil sector is the largest single contributor to tax revenue in Nigeria.

While Nigeria’s fiscus has deteriorated markedly over the past year and a half as a direct result of the COVID-19 pandemic, it is encouraging to see that the government has managed to reduce its bond issuance this year. Moreover, it is worth pointing out that while Nigeria’s debt servicing cost to revenue ratio is significant, the oil-producing nation’s overall debt to GDP ratio is lower than many of its African counterparts. Nigeria, therefore, finds itself in a better fiscal position than many other African countries. That’s not to say however that fiscal risks in Nigeria aren't skewed to the topside.

Macroeconomic: Zimbabwe shows signs that it is looking to clean up its image with international creditors

After two decades of not paying its debt, Zimbabwe has taken a step in the right direction in terms of cleaning up its balance sheet and its image by making payments to its creditors. According to Finance Minister Mthuli Ncube, the government hopes that the debt repayments will build goodwill towards the country.

Finance Minister Ncube announced earlier this month that Zimbabwe had made its first payment in 20 years to the Paris Club. Ncube said that "we have started paying them because, as a country, we ought to be known as good debtors and not bad debtors." In addition to the payments to the Paris Club, the Finance Minister said that Zimbabwe is also settling its debts to multilateral lenders.

The Finance Minister noted that clearing Zimbabwe's debts or simply catching up on payments is an enormous task. Note that Zimbabwe owes around $11bn to foreign lenders, which equates to roughly 71% of the country's GDP. It must be highlighted that $6.5bn of the total is payments that are in arrears. Ncube said that the country can’t clear its debt on its own, adding that the government would need a "sponsor" to bring its debt payments under control.

Looking ahead, while Zimbabwe has made some positive strides in terms of improving its image and relationship with Europe and the US, it must not be understated how long and bumpy the road ahead will be if the government wants to steer the country towards a sustainable debt path. That said, given the dire financial position that Zimbabwe finds itself in, investors will take comfort in any positive moves towards improving the country’s fiscal situation.