Nigeria bars over 72mn telephone lines. What next?

72 million SIM cards in Nigeria have been barred from making outgoing calls because they have not been linked to National Identification Numbers (NIN). The county's national identity management registration drive has been happening for over a year, with the Nigerian Communication Commission (NCC) shifting the deadline multiple times. But now, the commission has made good on its threats. In this report, we evaluate the potential impact on telco revenue.

In late 2020, the Nigerian government issued a directive to all telecommunications providers to stop the sale of new SIM cards, meaning that telcos could not acquire new customers as the Nigerian Communication Commission (NCC) embarked on an audit of the Subscriber Registration Database.

At the same time, the National Identity Management Commission initiated a nationwide drive to increase the number of citizens with a NIN, in collaboration with the NCC. The NCC announced that all SIM cards must be linked to a NIN, without which all SIM cards will be blocked. After a few months, Mobile Network Operators (MNOs) were allowed to resume SIM sales only to individuals with NIN.

The stated aim has been to build an up-to-date database of Nigerians and, according to the NCC, manage insecurity by ensuring that SIM users can be appropriately identified.

Due to limited registration points and long queues, the process was very difficult for individuals without an existing NIN. However, the MNOs stepped in and started offering NIN registration at different customer care centres. 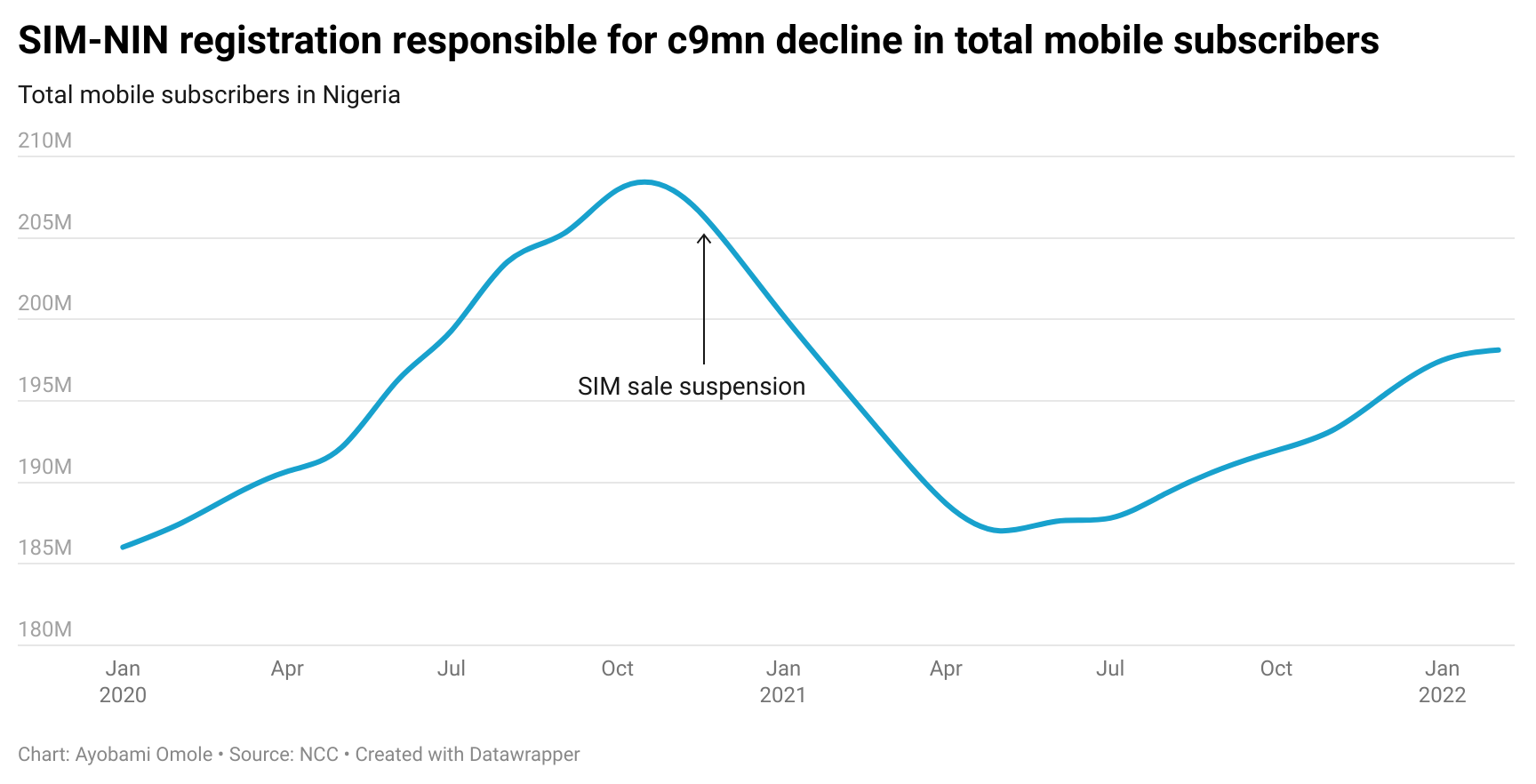 Interestingly, the profit of listed mobile network operators was not affected. Instead, both MTN and Airtel recorded impressive growth in revenue and profit, buoyed by growth in voice and data revenue. We believe the multiple SIM culture in Nigeria is partly responsible for the lack of correlation between subscriber decline and revenue performance, as subscribers consolidated their activities on fewer SIM cards.

The NCC shifted the deadline for NIN-SIM linkage multiple times, but has finally made good on its threat. from From 4 April, outgoing calls have been barred for telephone lines that have not linked their NIN to their SIM .

The NCC has made good on its threats. What next?

As of 4 April 2022, 125mn SIMs have been connected to 78mn NINs (because many individuals have multiple SIMs), leaving c72mn subscribers (of the current c198mn) at risk of being barred. As of FY2021, 44mn MTNN subscribers had submitted their NIN – 64% of their total subscribers, responsible for 74% of revenue. Currently, Airtel Africa’s operation in Nigeria has collated NIN information for 73% of their active subscribers, who contribute 79% of revenue.

While the two biggest MNOs (Airtel Nigeria and MTNN) have c25% of their revenue at risk, it is essential to note that telephone lines that are not already linked will remain active and able to receive incoming calls (but unable to make outgoing calls) and can still be linked to a NIN as registration remains ongoing. Therefore, we expect there to be a rush by unregistered users to get a NIN and link it to their SIMs. As such, we think the impact on revenues should be minimal as long as the registration process runs smoothly.

Also, we expect to see consolidation by multiple SIM owners shifting their activity to one or two SIMs, thereby stabilising revenue levels for MNOs. MNOs with more registration touchpoints are more likely to emerge unscathed from the situation. Taking a longer-term view, MNOs will also earn a competitive advantage if they provide easy and accessible registration touchpoints for NIN.