Nigeria's ban on Twitter has brought with it unflattering coverage in international mainstream media and does, no doubt, reflect underlying vulnerabilities on security, freedom, political succession, and ease of doing business – but these vulnerabilities are not new.

Nigeria is, alongside Kenya, the largest destination for venture capital in the Technology sector in Africa. However, its per capita figure is one-quarter that of Kenya. In conjunction with a relatively weak score on the World Bank's ease of doing business survey, this event likely reinforces the concern that Nigeria is not the best location to base a Tech operation, implied by Twitter's own recent choice of Ghana for its regional headquarters.

From a country ESG perspective though, it should be pointed out that while press freedom has deteriorated in Nigeria in recent years, this is a global phenomenon and its scores are much higher than the largest countries in emerging (China) and frontier (Vietnam) markets.

With oil prices around US$70/bbl, the Nigeria equity investment case is attractive for foreign institutional investors able to navigate convoluted FX convertibility: the equity market (NGSE Index) valued on forward PE of 9.6x, merely a 10% premium to the 5-year median, and a forward dividend yield of 5.5%, which compares to a negative real interest rate of 6.6% and underpins the inflows of local investors. Of course, for many foreign institutional investors the FX market remains a dysfunctional deal-breaker.

The Twitter ban brings together a number of separate events and trends in Nigeria:

Nigeria is Africa's largest Tech venture capital market in absolute terms, but relatively small in per capita terms and its ease of doing business score is low

But, on a per capita basis, it ranks lowest among the larger destination markets by some distance (at about one quarter of Kenya's level). 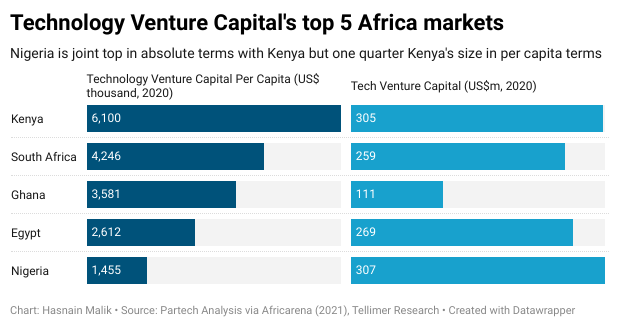 Nigeria's Ease of Doing Business score is low, at 57 out of 100, relative to pan-Africa peers, eg Kenya score 73. Globally, Nigeria ranks 131st out of 190 countries. By way of comparison, neighbour Ghana is 118th. 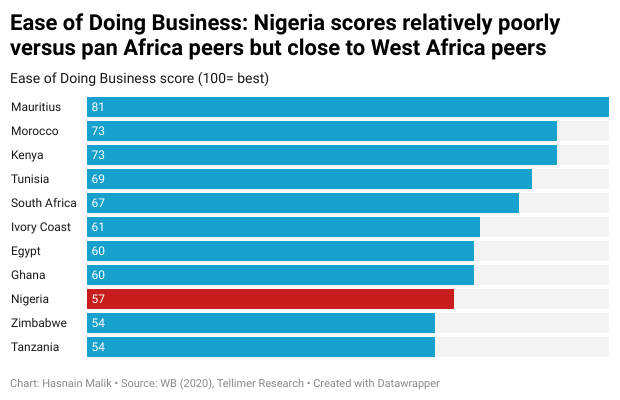 While Nigeria Press Freedom is deteriorating, it is much better than in the largest emerging and frontier equity markets

Nigeria notably lost out to Ghana, in April 2021, as the location for Twitter's regional headquarters. At the time, Twitter stated "As a champion for democracy, Ghana is a supporter of free speech, online freedom, and the Open Internet, of which Twitter is also an advocate."

In the Reporters Sans Frontieres Press Freedom Index for 2021, released in April 2021, out of 180 countries globally, Nigeria ranks 120th and its score deteriorated 11% compared to last year.

Nigeria: Boko Haram leader may be dead, May 2021

Human rights presents a dilemma for ESG investors and US foreign policy, February 2021