It was not surprising to see that US Treasuries tumbled in an initial reaction to the US inflation data, which showed that price increases were broadly higher than expected. Benchmark 10yr yields reached 4.0800% while the 2yr yield climbed to a new cycle high of 4.5353%. However, the moves were soon pared, with the 2yr yield dropping to around 4.45% and the 10yr back below 4.00% as the market digested the inflation numbers properly and saw that there were several signs showing that inflation pressures may be cooling, with around 60% of items within the CPI basket above their five-year average, down from more than 70% in August. The market has also already priced in a very hawkish policy path for the Fed, suggesting that the topside for yields is looking more limited now.

Meanwhile, UK bonds rallied yesterday amid reports that the government was looking into ways to U-turn on PM Truss’s tax cuts and other policies. Yields are now down for the week for gilts, helping to stabilise sentiment in the global market.

Angola: Speaking on the sidelines of the IMF-World Bank Annual Meeting, Bank of Angola Governor Jose De Lima Massano said that Angola will keep reducing interest rates as long as inflation is kept low. The Governor also forecasts inflation to fall to 16% this year and between 9-10% by the end of 2023. Cutting borrowing costs has made Angola an outlier as price gains accelerate in many countries worldwide. In September, the central bank delivered a rate cut for the first time since 2019, by 50bp to 19.50%. That came on the back of easing domestic inflation amid a strengthening kwanza which is one of the best-performing African currencies year-to-date against the USD.

Angola and Uganda: As the adoption of digital currencies gains traction across the African continent, Angola and Uganda have become the latest countries to show interest. Bank of Uganda’s Deputy Governor Michael Atingi-Ego was quoted as saying, “We are now looking and trying to understand the objectives for support of the CBDC, the design options, what is the role of the central bank, what role will financial institutions have to play, monetary policy implications; do you pay interest on it.” Atingi-Ego added that Uganda is also seeking crypto players to suggest products. Meanwhile, Bank of Angola’s Governor De Lima Massano said that the bank has a working paper for a CBDC that it is studying. Although several risks need to be worked out, CBs and economies stand to benefit from the adoption of CBDCs. While we expect the rolling out to be measured, we are of the view that this is the direction in which the countries, not only on the African continent but globally, are shifting.

Namibia: Consumer price inflation in Namibia slowed to 7.1% y/y in September from 7.3% y/y in August. Month-on-month, consumer price inflation decelerated to 0.1% from 0.3% in August. While price growth slowed in September, it remains elevated near last month's more than 5-year high. According to Namibia's statistics agency, transport, food, and non-alcoholic beverages continued to be the main contributors to the annual inflation rate. While inflation slowed for the first time since May, it remains elevated and suggests that risks exist that the Bank of Namibia could continue to tighten monetary policy.

Nigeria: Shell's Nigeria subsidiary is investigating reports that an illegal oil tap ran for nine years on a pipeline it operates. Shell said that it had detected illegal connections as part of a regular surveillance and would launch a joint investigation with regulators to "establish the nature and condition" of the lines before removing them. Meanwhile, the Nigerian National Petroleum Company pointed to the theft line discovery as evidence that Nigeria's coordinated interventions, including contracts with companies owned by former militants, to crack down on theft were paying off. Rampant theft and vandalism on pipelines have led to a decline in oil output, exports, and less foreign exchange revenue inflows.

Oil: It was an interesting day in the markets yesterday and oil was no exception to this. The initial reaction to the US CPI figures saw oil extend its recent slump, reaching a low of  $91 per barrel for the front-month Brent contract. Market sentiment, however, soon reversed and a rally in Wall Street helped crude rebound with Brent closing yesterday’s session just below the $95 per barrel level, undoing the previous session’s losses. However, crude is still on course to post a weekly drop, as demand concerns have outweighed to some degree the reduction in upcoming supply after OPEC+ announced its cuts last week. The demand outlook from China is weakening as the country persists with its zero-COVID stance, while expectations that the Fed and other major central banks are still going to hike aggressively are adding to the downward pressure on oil. Furthermore, official government data released yesterday showed a notable build in US Crude inventories as export levels slumped.

Botswana: Today's economic calendar features September's inflation figures, which are anticipated to have maintained their upward trend. Another double-digit figure is likely after price pressures accelerated to 14.6% y/y in August, setting the stage for elevated price levels through the last quarter of the year. Previously, the Bank of Botswana (BoB) stated that inflation would revert to its target rate of 3% - 6% by the end of the year, but this appears to be a long way off, even with a slew of measures aimed at cushioning households from the impact of the challenging economic situation, including a reduction of value-added tax from 14% to 12%. The BoB Governor Moses Pelaelo mentioned last month that the countermeasures introduced to tackle rising inflation would start to work in two or three months. Meanwhile, the continued pass-through of currency weakness and surging energy costs more than likely remained the main drivers. More broadly, transportation and food inflation also remain worrying and will also take a significant toll on economic activity. The data will pressure the central bank to continue its monetary tightening cycle when its board meets next week to combat red-hot inflation.

Although not as impressive as the gains recorded in 2021, the Zambian kwacha has had a strong performance against the USD in 2022. The kwacha has outperformed most of its African peers and is ranked as the second best-performing African currency tracked by Bloomberg on a year-to-date basis, up by almost 5%. In addition to continued central bank support in the FX market, positive fiscal developments such as the IMF approval for a program bolstering sentiment and triggering a rebound in foreign portfolio flows have supported the kwacha. 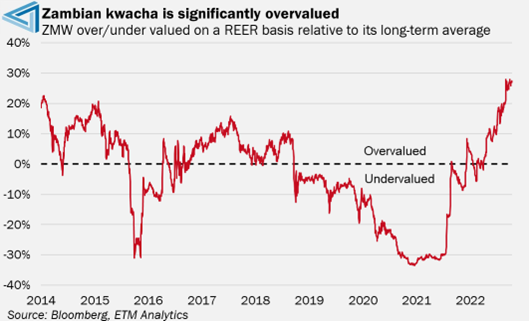 It is worth noting that since the June 2021 record low of ZMW 22.64 per dollar, according to Bloomberg data going back to 1994, the kwacha has advanced by almost 30%. Such has been the advance in the currency that it now finds itself in extreme overvalued territory on a real effective exchange rate basis, having been deeply undervalued at the end of 2020. With the kwacha deeply overvalued, room for further significant gains is now likely limited. While an IMF program was secured, there remains a lot of work to be done for Zambia to restructure its debt.

In the near term, the weakening bias seen on the kwacha since the beginning of September is likely to persist against a backdrop of strong dollar demand and limited supply on the market. Note that since September, the kwacha has lost over 3%.

That said, the US dollar will be key in determining how the kwacha performs in the final weeks of 2022. The dollar is also significantly overvalued and could be in store for a meaningful correction in the months to come should the Fed adopt a less hawkish stance or the US economy shows signs of a meaningful downturn.

Fixed Income: Cost to insure against a sovereign default in Nigeria rises on the back of debt restructuring uncertainty

A near-perfect storm has hit Nigerian bonds as domestic fiscal pressures rise and global liquidity continues to dry up. Nigerian Eurobond prices have fallen sharply this year as domestic and global interest rates rise and traders price in an increased fiscal premium amid mounting fiscal pressures. This week has been a particularly bad week for Nigerian Eurobonds after the Finance Minister announced that the government is considering restructuring a portion of its debt.

Adding to the headwinds were the stronger the expected US headline and core CPI readings which bolster bets that the Fed will deliver another outsized rate hike at its next meeting. In addition to strengthening the dollar, the aggressive tightening in the US has resulted in significantly higher funding costs in the international debt market, where many African sovereigns had been funding themselves in recent years. This put many African sovereigns, such as Nigeria, in a precarious fiscal position where they are unable to roll over or finance their budget shortfalls in the international bond market. 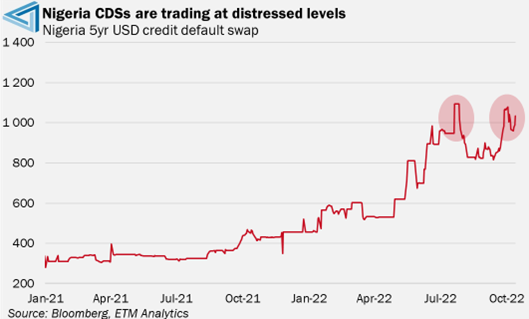 The Debt Management Office (DMO) said in a statement late on Thursday that Nigeria is not restructuring its debt but is exploring bond buy-back and bond exchanges to manage its debt liability. The DMO assured investors and creditors that it would "meet all its debt obligations.” This has created added confusion in the market and will almost certainly result in increased levels of volatility. 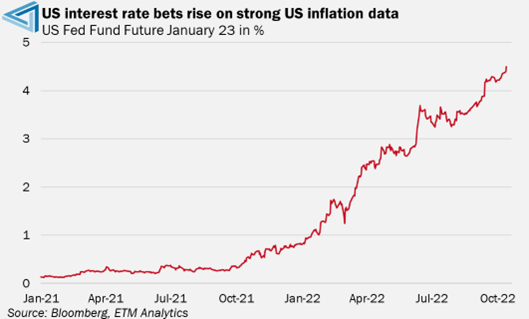 The strong inflation print and tight labour market conditions saw the January 2023 Fed Fund Future, widely used as a proxy for the market's interest expectation, rise to 4.5% yesterday. Meanwhile, the March contract hit 5.0%, implying that the market expects the Fed to continue to hike rates aggressively in the first half of next year.

While US stocks staged a marked rebound late in the US session, market reports suggest that this was a function of investors covering short bets rather than a shift in interest rate bets. With the Fed expected to remain steadfast in its aggressive tightening, global market liquidity will continue to dry up. This is a major concern for Africa as they are highly dependent on offshore funding. Therefore, the thinner liquidity conditions will compound funding pressures across Africa. Therefore, currency and bond weakness in Africa is likely to persist in the near term or until major central banks change their tune.