After years of deliberation in the National Assembly, the Petroleum Industry Bill (PIB) was passed by both houses of the parliament yesterday. The bill has survived many administrations, with former President Yar’Adua's government being the first to promise passing the bill in 2008 when it was introduced.

The bill started off as an omnibus bill, before it was split into four different ones to cover different sections. In 2020, the four bills were finally consolidated into different chapters in one bill. The PIB addresses several issues from the restructuring of the state oil firm, Nigerian National Petroleum Corporation (NNPC), to more progressive and competitive fiscal terms as well as provisions to ensure host communities (where oil is produced) are well taken care of.

The PIB was necessitated by the need to create a conducive business environment for oil and gas investors. Provisions in the PIB provide more favourable fiscal terms, which repeal and modify old laws that had made investment in Nigeria's oil and gas sector less competitive. With these favourable terms, Nigeria can now attract investors to explore and monetise its 36bn proven oil reserves and 5.7tn cubic metres of proven gas reserves.

This is not the first time that both houses of parliament have passed the bill – back in 2018, the bill was passed, but President Buhari did not give his assent calling for modifications to some provisions which, according to him, were detrimental to revenue available to the federal, states, Federal Capital Territory and local governments in the country. Since then, the bill has undergone various modifications before it was presented by the President to the National Assembly again in September 2020.

However, given the recent pressure to salvage the oil sector from abandonment by International Oil Companies (IOC) that operate c70% of Nigeria’s oil production, President Buhari is more likely to give his assent to the bill this time around. 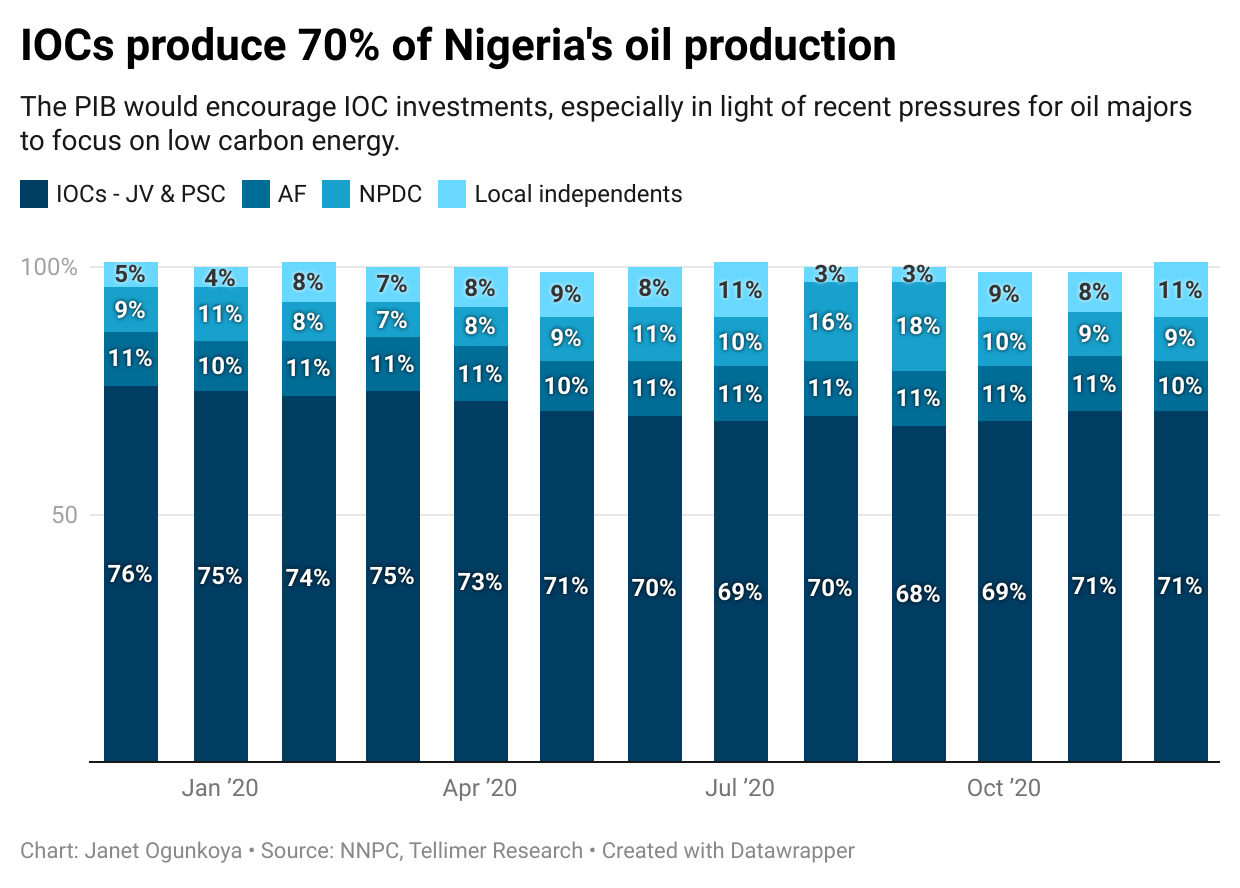 Many IOCs have been urging the Nigerian government to pass the bill. Although the PIB in its current form is at risk of being obsolete – given the geared up global pressure to steer away from fossil fuels to lower carbon energy – passing the bill is likely to speed up many oil projects that have been held back by IOCs for years. IOCs have so far been on the sidelines seeking clarity on what fiscal measures and reforms Nigeria would put in place to govern the oil and gas sector. This will be necessary to avoid towing Angola's path, where lack of investments in offshore assets have caused a sharp decline in production by over a third since the oil price crash in 2014.

The lack of investment by the IOCs was exacerbated by the government increasing taxes on deep water oil production in 2019 much to the chagrin of the IOCs. However, with the PIB, investors would receive more favourable fiscal terms that are likely to improve the competitiveness of Nigeria’s oil and gas industry. This will support the NNPC’s goal to increase reserves to 40bn barrels (June 2020: 34bn) by 2025 and production to 3mbpd (current capacity: 2mbpd). 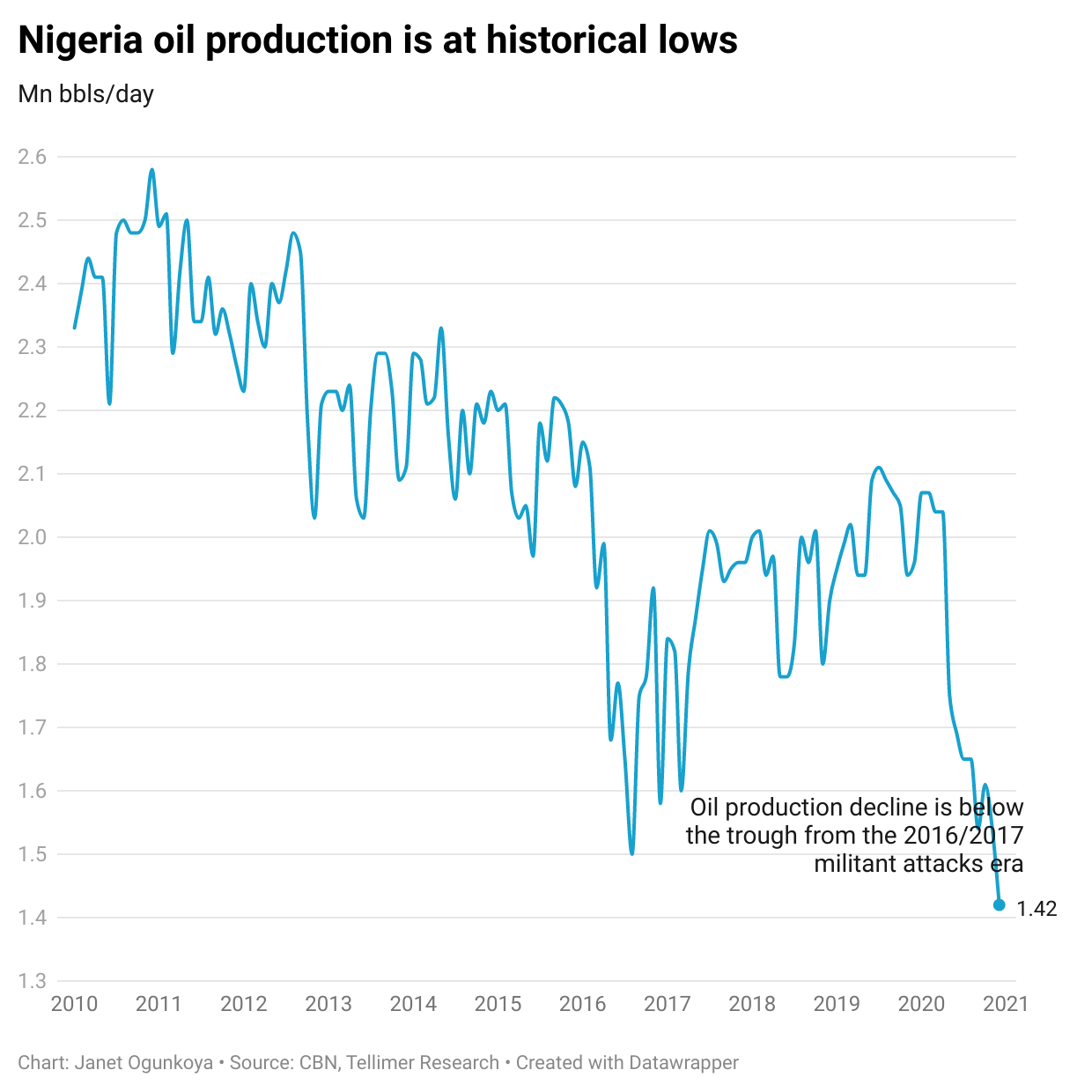 The PIB could be the last chance to salvage IOC participation

The PIB could just be what Nigeria’s oil and gas sector needs to salvage the industry. If the fiscal terms prove favourable enough, IOCs could execute projects that have been in the pipeline.

The reason for our optimism sits in the NNPC’s win earlier in May when it finally renewed the OML 118 deep water license with the partners – Shell (the operator), Total, ExxonMobil, and Eni – after settling long standing tax dispute since 2019 (after the increase in the taxes on deep water oil production). The renewed 20-year license would enable expansion of the Bonga field, Nigeria’s first deepwater field, and has a potential yield of 3.2bn barrels. This could be one of many projects that could be implemented after (or if) the PIB is passed on time.

It could get better before it gets worse…

That said, it is almost inevitable that we see IOCs exit Nigeria (especially their less profitable assets), even with the passing of the PIB. This is considering the intensified pressure on IOCs to focus on lower carbon energy. And as we highlighted in our previous note, Africa’s top producers stand to be at risk, given that the bulk of oil production (Nigeria: +70%) is operated by IOCs.

Recently, we have seen divestments from onshore and shallow water assets by the likes of Shell and Chevron. Nonetheless, passing the bill will taper the pace of exits in the short term if the IOCs find the terms of the PIB favourable enough to keep Nigeria assets in their portfolio.