The official naira exchange rate was reportedly devalued on Friday 14 May, converging with the Investors’ & Exporters’ (I&E, or Nafex) rate near NGN 410/US$ from the previous rate of 380/US$. The news follows a similar announcement in March which was ultimately reversed, so the news should be taken with a grain of salt. The CBN has yet to make an official announcement confirming the devaluation, while the official exchange rate has not been quoted on the CBN website since 11 May.

Further, as we said at the time of the supposed devaluation in March, devaluation of the official exchange rate is unlikely to have much of an impact while the Nafex rate (which is the relevant market rate) stays pegged at an overvalued rate of 410/US$. While the Nafex rate has weakened marginally since its devaluation in February, it still trades c11% stronger than the parallel market rate and c18% stronger than the 12-month NDF rate. This meshes with the IMF’s assessment, having said in February that the NGN was c18.5% overvalued and with the Nafex rate depreciating by c4% since. 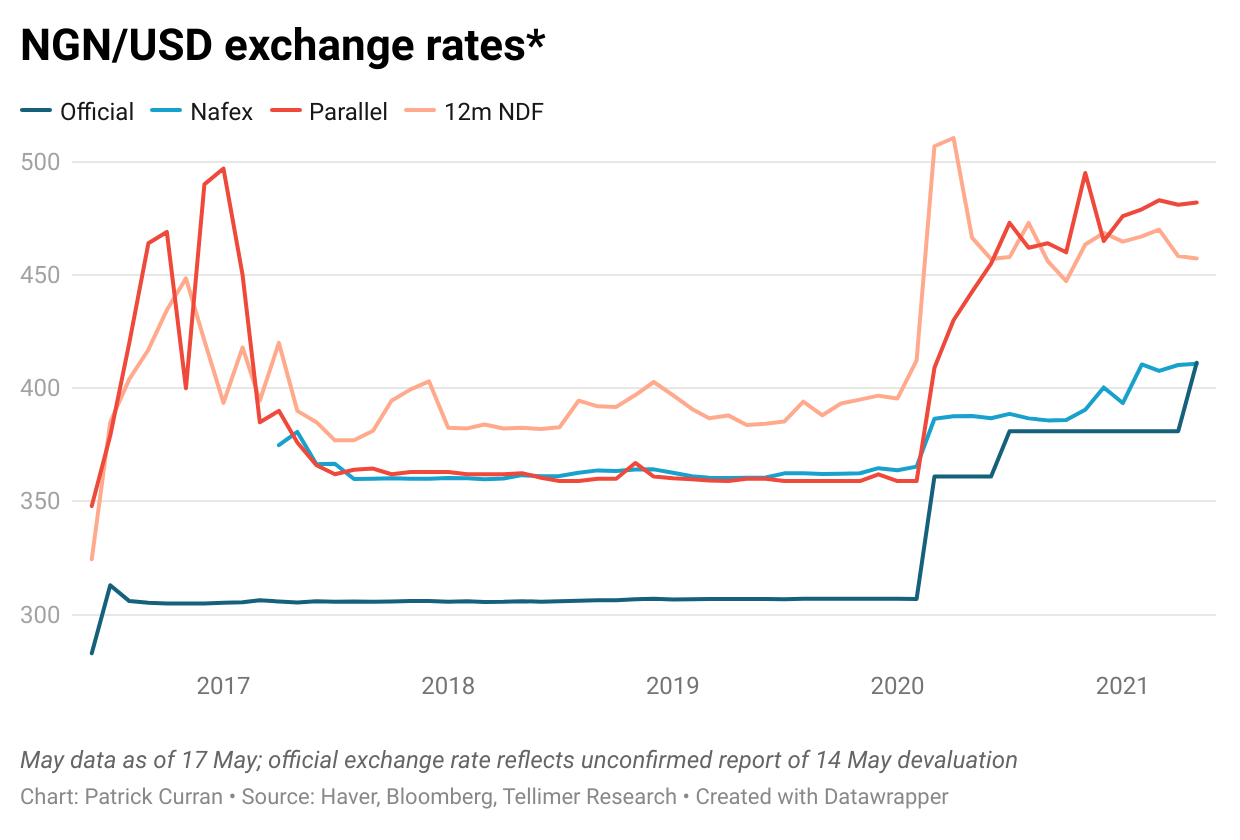 So while unification of the official and Nafex exchange rates would help simplify Nigeria’s convoluted FX regime at the margins, and could provide a slight boost to the government’s oil revenue (we estimate c0.2% of GDP at an oil price of US$65/bbl), the real impact on Nigeria’s economy is likely to be extremely limited.

In addition, the renewed bout of confusion surrounding the status of Nigeria’s official exchange rate is yet another potent illustration of the ineptitude with which the CBN has handled changes to Nigeria’s FX regime, sowing unnecessary confusion by flipflopping and failing to clearly communicate what amounts to mere cosmetic changes.

The CBN has continued to try to control exchange rate pressure via administrative measures, including the indefinite extension of the CBN’s “Naira 4 Dollar Scheme”, which offers a 5 naira incentive for every dollar received as a remittance inflow through licensed international money transfers operators. However, remittances will likely remain subdued given the large gap between the parallel and official exchange rates, which makes it far more lucrative to send money through unofficial channels.

Official data points to a c28% (cUS$6.6bn) decline in remittances in 2020, which corresponded with a cUS$16bn swing in net errors and omissions from an outflow of US$4.1bn in 2019 to an inflow of US$11.9bn in 2020, pointing to a mass shift towards unofficial channels for remittances and other FX inflows. World Bank data points to a further 75% decline in Q1, which encompasses the first 26 days of the Naira 4 Dollar Scheme and seems to point to a lack of efficacy thus far. 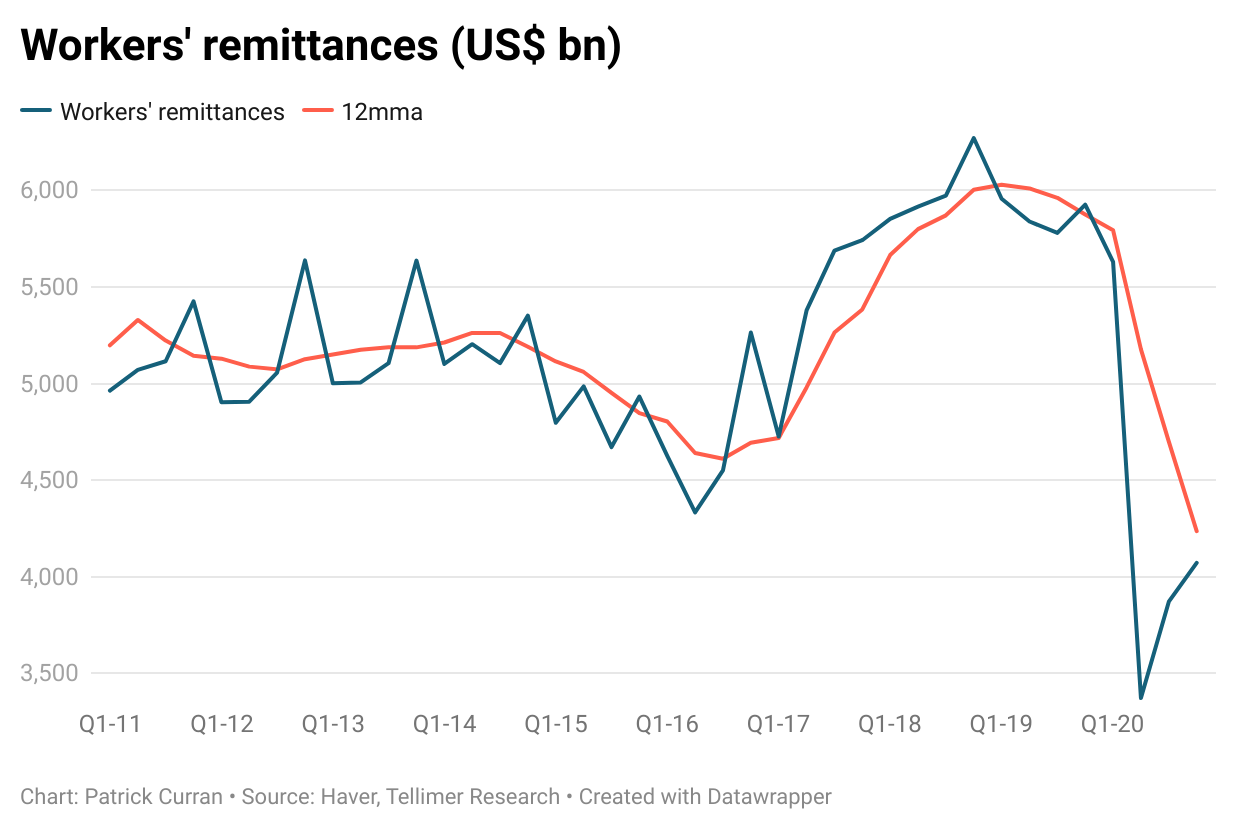 Other CBN policies have included a ban on crypto exchanges, the addition of wheat and sugar to the list of imports banned from accessing FX from official channels, and continued calls from the CBN and Governor Emefiele for exporters to repatriate their export proceeds. As usual, these policies fail to address the underlying problem of an overvalued exchange rate and lack of FX supply, instead doubling down on failed policies of capital controls and import substitution.

Recent changes will do little to address the lack of FX supply and liquidity, with volume on the I&E window remaining subdued. Official reserves have stayed relatively stable this year, giving the CBN some room for further intervention, but FX supply will remain limited without more exchange rate flexibility and we do not see anything to suggest that the CBN will be willing to adopt a more flexible exchange rate regime (a sentiment that was confirmed by our meeting with the IMF last month). 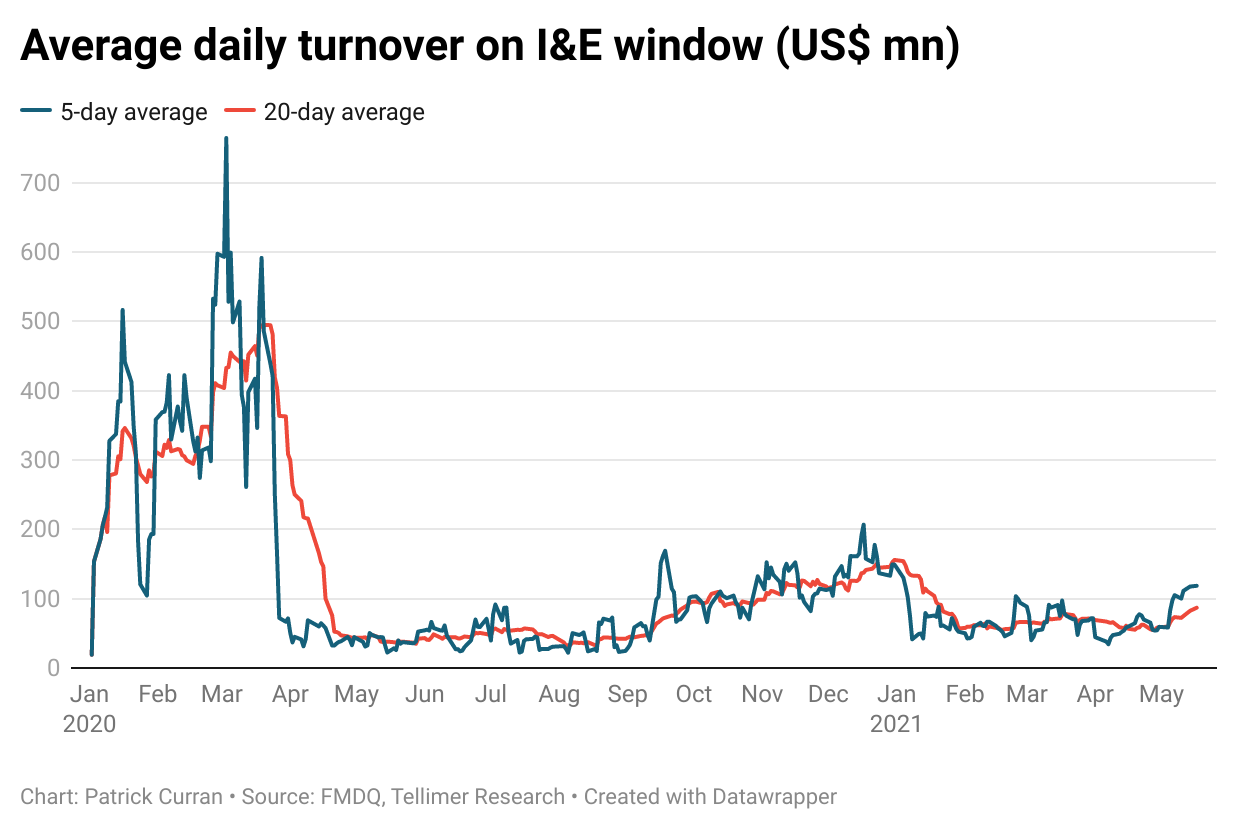 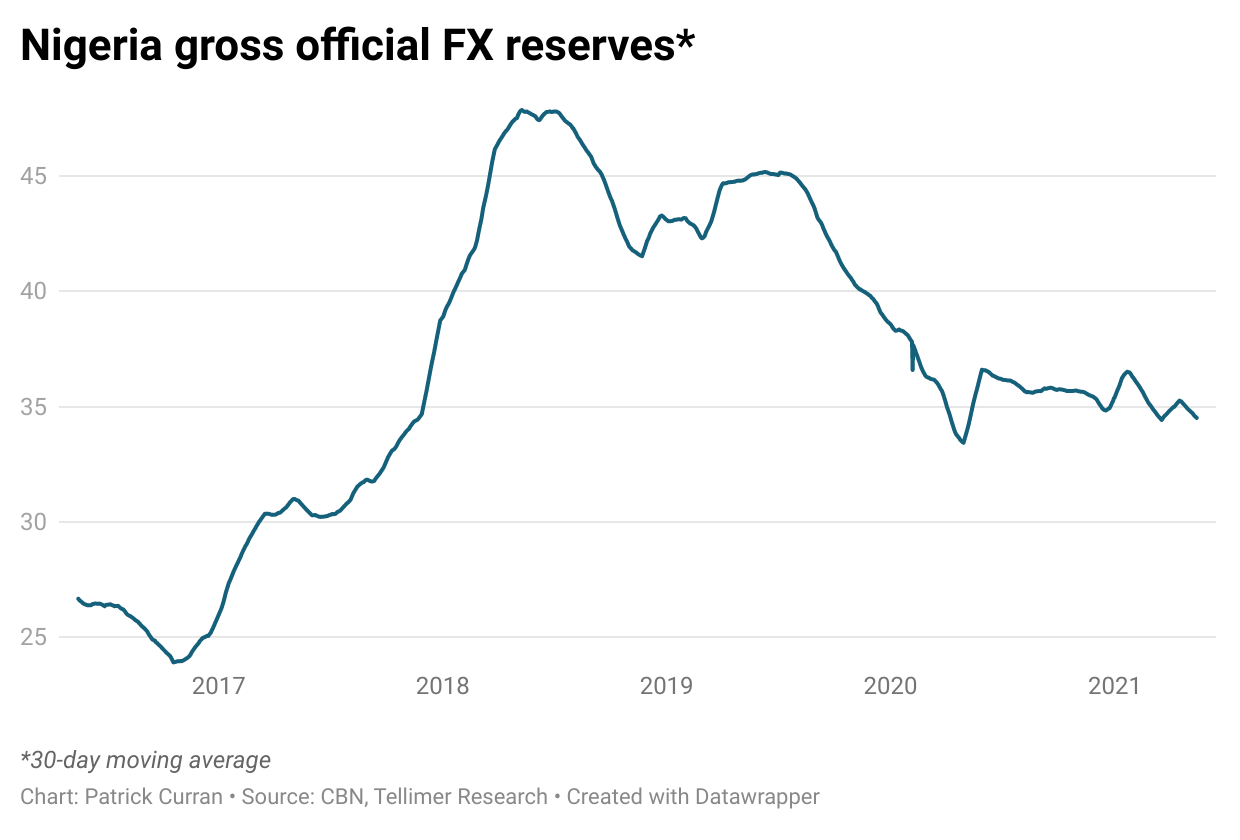 At the same time, inflation remains elevated after having fallen slightly from 18.2% to 18.1% yoy in April (the first decrease since August 2019) and government yields remain sharply negative across the curve despite continuous increases since the end of 2020. While lack of FX supply and a relatively loose monetary stance have exacerbated the inflationary problem, inflation has shown a very low correlation with interest rates in Nigeria due to the weak transmission mechanism and will likely remain elevated regardless of the CBN’s policy stance due to structural factors. 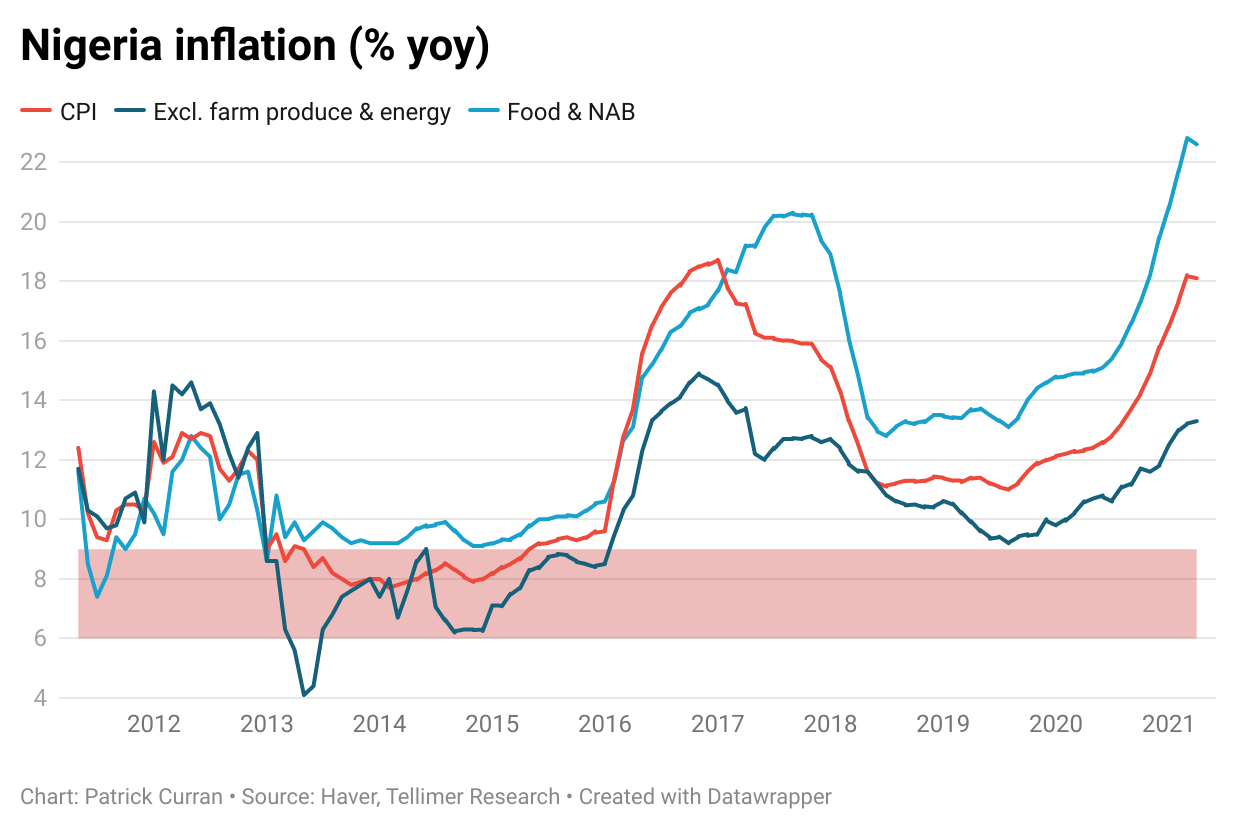 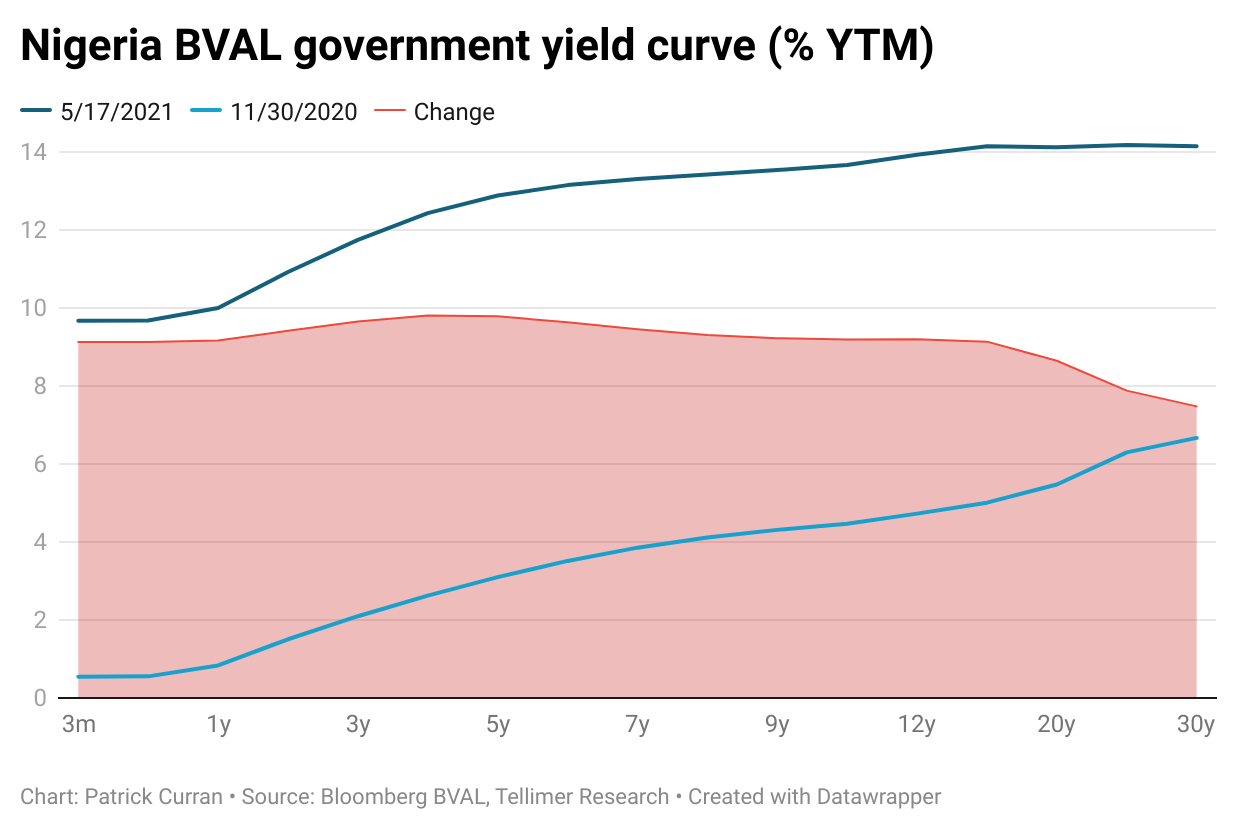 Chief among them is growing insecurity, with half of Nigeria’s governors calling on President Buhari to address the situation and expressing “grave concern on the security challenges currently plaguing the nation.” Buhari, meanwhile, has alleged that several groups are planning a coup, although this seems unlikely with the military stretched thin battling Boko Haram in the northeast, a spate of violence and kidnappings allegedly propagated by the separatist group IPOB in the southeast, and a worsening conflict between farmers and herders in the central breadbasket that is pushing up food prices.

Regardless, the point remains that reports of an official exchange rate devaluation, even if they turn out to be true (which is not a foregone conclusion), amount to little more than a cosmetic change that will ultimately fail to address Nigeria’s FX imbalances. Without devaluating the Nafex rate to a market-clearing level and allowing it to fluctuate thereafter in line with supply and demand and to reflect Nigeria’s yawning inflation differential with the US and other major EMs, Nigeria’s FX regime will continue to serve as a major impediment to growth and macro stability.

Nigeria and IMF clash on FX and monetary policy, 9 February