Today will mark the reopening of cash trading for bonds for several major economies after yesterday’s public holidays. Trading for bunds was, however, open yesterday, and the market gained across the curve amid growing recession concerns. Bund yields were down between 6bp and 13bp with the curve inversion deepening to signal growing recession risk. Trading volumes were thin, with futures volumes around 80% of their average levels as UST, gilt, and JGB cash trading was closed. US Treasury futures, however, found some support yesterday, and we should see bonds remain in favour as normal trading resumes, given the building fears over slowing global growth and the rising risk of recessions in the world’s major economies. Japanese cash bond trading, however, will only resume tomorrow, given that the markets in the Asian nation remain closed today.

Data released this morning showed China’s economy ended 2022 in a major slump as a decline in the manufacturing sector worsened. For context, China’s Caixin Manufacturing PMI reading fell from 49.4 in November to 49.0 in December. While it is encouraging that China has ditched its Covid-Zero policy, the abrupt removal of the virus containment measures have led to a surge in infections, prompting people to stay at home as they feel ill or fear becoming infected. The sharp rise in infection has dampened optimism that China’s economy will stage a strong rebound in 2023 amid fears that new measures could be implemented if the number of new daily infections remains elevated. Adding to growth concerns on Monday were comments from International Monetary Fund Director Kristalina Georgieva. The IMF head warned that the global economy faces a tough year, tougher than the year we leave behind us.”

Kenya: Investors on the Nairobi Securities Exchange (NSE) lost KES 777.83bn ($6.37bn) in the nine months to September 2022 as the value of listed firms dropped by 28% amid a persistent bear run on the struggling bourse. Data from the Central Bank of Kenya showed that the bourse's market capitalization fell to KES 2trn ($16.39bn) from KES 2.77trn ($22.7bn) during the period under review, with the situation compounded by massive exits by foreign investors. In September, foreign investors' participation in the bourse fell to 35.92% from 49.92%. The NSE has struggled amid tightening global financial conditions, shilling weakness, rising inflation, a lack of new listings, poor performance of listed firms, and significant selloffs by international investors.

Burkina Faso: Citing deep concerns over "unconstitutional change" in government, the United States has dropped Burkina Faso from its AGOA trade preference program. The US said that  Burkina Faso had failed to meet the requirements of the AGOA statute and would be given "clear benchmarks" for a pathway toward reinstatement to the trade program, adding that Washington would work with the Burkinabe government. Meanwhile, the junta's foreign affairs ministry yesterday reacted to the US decision by repeating a November statement saying that the timetable for a return to democracy had not changed. Burkina Faso had committed to returning to constitutional rule in 24 months in a July agreement with the West African regional bloc ECOWAS.

Egypt: The Central Bank of Egypt is studying the rules for launching digital currencies as a substitute for other types of cryptocurrencies and their risks. According to the financial stability report issued by the CBE, internal and external working committees were formed from all ministries and government agencies concerned, headed by it, with the aim of studying the file of applying digital currencies to central banks. The central bank indicated in its report that it is seeking the assistance of several international institutions to study the application of digital currencies, as it is making progress in the aforementioned study. The central bank digital currency project is a response to the change in the payment system, financing, and technology in light of the changes that accompanied the outbreak of the coronavirus pandemic.

Zambia: Zesco announced yesterday will implement load shedding from Tuesday after a "drastic reduction" in available water at its Kariba North Bank Power Station. The low water levels at Kariba have been a concern for some time. Recall in November, the Zambezi River Authority said that water allocations for Zambia and Zimbabwe from Kariba would drop 11% in 2023 as the dam's levels fall, risking increased power outages for the two countries. Zambia's Zesco Ltd. and Zimbabwe's Zesa Ltd. are expected to equally share 40bn cubic meters of water this year, down from 45bn cubic meters. Increased power outages could derail economic activity and potentially weigh on Zambia's growth prospects this year.

Oil: Oil prices fluctuated yesterday and are on the defensive this morning as demand concerns dominate traders’ focus. Brent has dipped to around $85.65 per barrel, while WTI is trading near $80 per barrel when looking at the front-month contracts, with both benchmarks sliding after this morning’s weak China PMI data. The official figures pointed to a further contraction in China’s manufacturing sector for December, with weak demand signalled as the economy continues to struggle with rising infection rates after it rolled back most of its COVID-19 restrictions. Furthermore, comments from the head of the IMF regarding a global recession pressured commodity markets yesterday. With these demand concerns at the forefront, it is not surprising to see that the market is pricing in ample supply over the near term, with Brent and WTI prompt spreads trading in contango and widening out compared to levels seen a month ago. This increase in near-term supply is further highlighted by the increase in oil in floating storage. The amount of crude held in tankers around the world rose to 98.50mn barrels as of the end of 2022, up 11% compared to the previous week. With near-term supply concerns reduced and slowing demand expected, we should see oil prices remain downside-focused at the start of the new year.

Forex: Nigeria’s foreign exchange reserves dropped by more than 8.0% in 2022 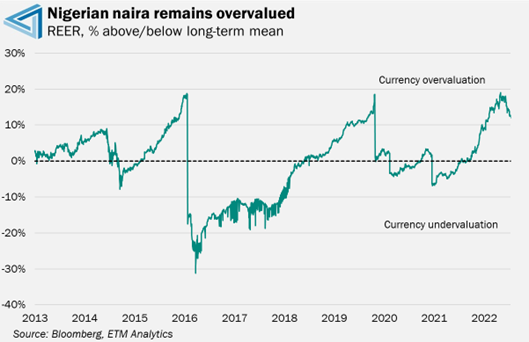 Several factors detracted from Nigeria’s foreign exchange reserves in 2022. Aside from honouring obligations that were due, reserves were under pressure due to forex interventions deployed by the CBN to address the forex crisis in the aviation sector, an inability to capitalize on the higher-than-budgeted oil price amid low production levels, and the continued injection of foreign exchange to support the naira. Falling foreign exchange reserves and inflows magnified dollar shortages in Nigeria and saw the naira weaken both in the official and parallel markets in 2022. In the former, the naira weakened by more than 8% against the USD, while in the parallel market dropped by over 23%.

A more than 60% differential between both rates in 2022 has driven speculation that Nigeria will once again devalue the official rate to close the gap. In the currency derivatives market, bets for a significant naira depreciation have been building as speculators price in a notable devaluation in the currency. Our in-house indicators point to a naira overvalued by 13% on a real effective exchange rate basis, suggesting there is room for a  considerable depreciation in the naira. The devaluation may, however, only occur after the February elections. 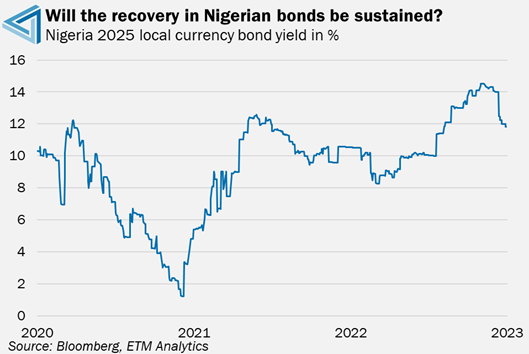 The DMO said that the two bonds would go on sale today, adding that the closing date would be Friday. The settlement date for the two bonds is January 11 and the coupon payment dates are April 11, July 11, October 11, and January 11. The DMO said in its statement that the bonds “are offered at NGN 1,000 per unit subject to a minimum subscription of NGN 5,000 and in multiples of NGN 1,000 thereafter, subject to a maximum subscription of NGN 50 million.”

The first issuance of the year will be watched closely by investors to gauge the market’s appetite for taking on Nigerian government debt. While Nigerian bonds in the secondary market staged a meaningful recovery in the final few sessions of 2022, Nigerian local currency bonds ended the year significantly weaker. The weakness was underpinned by soaring inflation and political uncertainty ahead of the presidential election, which is now just a few weeks away. Given this backdrop, it is unlikely that we will see a marked improvement in sentiment towards Nigerian bonds in the near term.

The overarching theme across the global commodity market in 2023 is expected to be easing prices. The primary factor that will likely result in lower commodity prices is slowing global growth as the effects of the tighter monetary conditions take effect. In the soft commodities market, supply factors will also play a role. The end of La Nina will likely provide some relief to soft commodity prices. 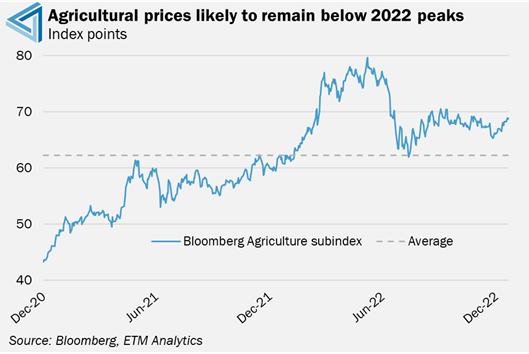 Crop yields are expected to improve, alleviating supply tightness and leading to a downtrend in food prices. High food prices were a major contributor to inflation in 2022; therefore, lower prices would provide some welcomed relief for consumers around the world. Note that most African countries rely on food imports, and as such, lower food prices will help reduce the size of their import bills and should help lower inflation.

As mentioned above, agricultural prices are likely going to continue to fall, especially from the end of Q1 onwards, once South America’s harvest comes to an end. Looking at the Bloomberg agricultural subindex, prices remain above the two-year average but are now well below the peaks seen in 2022. While we expect agriculture prices to retreat, there are considerable upside risks to our base view. The biggest risk is the ongoing war between Russia and Ukraine and the risk that the UN grain deal ends.