This morning the trade-weighted USD scaled a fresh two-year high, driving the USD even deeper into overvalued territory. The move is pushing the USD to extremes relative to its trading partners, which will affect the economy. It will detract from the trade balance, detracting from GDP growth. On the upside, it will help reduce inflation a lot more quickly and ease some of the pressure on the Fed to act aggressively. Any indications through the months ahead that inflation is retreating quickly could translate into a reversal of fortunes for the USD, but the inflation will have to turn lower and do so with enough conviction to show investors that the Fed has won the battle. For now, the USD surge appears to be relentless; this morning, most currencies are on the defensive. The EUR-USD has now sunk to 0.9550, while the GBP-USD is looking to slide back down to the week's lows as investors continue to express concern about UK policy. Parity on the GBP-USD still appears possible.

S Treasury yields have extended their moves higher, with the 10yr benchmark yield touching 4.00% for the first time since 2010 as the global sell-off continued. US Treasuries have been rattled by a hawkish Fed and concerns that Japan could begin selling some of its massive holdings of USTs as it seeks to support its own currency. Gilts are being pressured by rising concerns that the new government’s fiscal spending could lead to massive dislocations in the market and between monetary and fiscal policy. European bonds, meanwhile, are being battered by surging inflation, the war in Ukraine, and looming discontent amongst the public.

Egypt: Official data showed that tourist arrivals surged in the first half of 2022, with 4.9mn tourists visiting the country compared to 2.6mn in the same period in 2021. The increase in tourist visits is a welcome development, given that the sector had been ravaged by the coronavirus pandemic, with Russia's invasion of Ukraine compounding the sector's challenges. The sharp recovery in the tourism sector will provide a boost to foreign currency inflows and help shore up economic activity.

Ghana: Talks between Ghana's finance ministry and the International Monetary Fund (IMF) have commenced. According to a statement from the ministry, a key requirement for a program is confirmation that Ghana's debt is on a sustainable path. Ghana is currently carrying out a comprehensive debt sustainability analysis. The ministry added that the government is creating a comprehensive economic program to form the basis of negotiations with the IMF. Ghana is seeking to secure a program from the IMF to help address its macroeconomic challenges. Financial markets remain highly sensitive to developments relating to a potential debt restructuring.

Kenya: A statement from Kenya's State House shows that the cabinet has flagged inflation, interest rates, exchange rates, and the price of global commodities as key risks to implementing the 2022-23 budget. In the statement, the cabinet also called for the rationalization of the budget to enable realignment of expenditure to bridge the fiscal deficit and to enable the government to respond more robustly to domestic challenges such as drought and food security. President William Ruto, who was sworn in early this month, has inherited a wide-range of problems, such as ballooning debt, rising inflation, and growing hunger caused by one of the worst droughts in the region. Meanwhile, President Ruto has appointed former central bank governor Njuguna Ndungú as head of Treasury. Ndungú is expected to oversee Ruto's key economic pledges, including a plan to invest at least KES 500bn ($4.2bn) in agriculture and small businesses over five years.

Morocco: After keeping its policy rate unchanged for eight straight quarters, Morocco's central bank joined the wave of policy tightening yesterday. The Bank al-Maghrib hiked its policy rate by 50bp to 2% in a bid to curb inflation that is at its highest level in decades. The hike by Bank al-Maghrib may signal a change in approach to monetary policy after Morocco had been an outlier at a time when many central banks are raising rates to combat surging inflation. Bank al-Maghrib last adjusted rates in the first half of 2020, cutting by a cumulative 75bp to support the economy amid the impact of the coronavirus pandemic on the tourism-reliant country.

Uganda: In the latest move to attract more investment into its growing oil and gas industry, Uganda aims to open up a third oil and gas licensing round in 2023. According to the country's energy minister, the licensing round is part of Uganda's strategy to exploit its vast oil and gas resources in a sustainable manner. The minister added that the decision by France's TotalEnergies and China's CNOOC Ltd. to sign a final investment decision with Uganda and Tanzania to commence the development of a 230,000 barrels-a-day oil project early this year has since unlocked the whole industry. Uganda has some of the largest undeveloped oil reserves in sub-Saharan Africa, and the country could significantly benefit, especially at a time when Europe is looking for alternative sources of energy supply to reduce its dependency on Russia.

Oil: Oil markets are back on the defensive this morning, with a surging US dollar weighing on the commodity complex in general. Brent is looking to dip back below the $85 per barrel level as a result, while WTI has slumped to $77.50 per barrel in early trade this morning. Both contracts are at lows not seen since January as a hawkish Federal Reserve, and growing risks of a major global economic slowdown continue to drive the flight to safety. Brent has lost more than 12% this month so far, and the losses could have been even greater, but traders are waiting to see what OPEC+ will do at next week’s ministerial meeting.

Zimbabwe: The Reserve Bank of Zimbabwe yesterday kept its main policy rate and medium-term lending rate unchanged at 200% and 100%, respectively. According to the central bank, the rates will remain unchanged "until durable stability, measured by a sustained decline in month-on-month inflation to levels of less than 5%, is attained." As mentioned in recent commentary, the risk of stagflation in Zimbabwe is acute, with headline inflation expected to remain buoyed in triple-digit territory, while the extremely high policy rates will continue to constrain economic growth.

Against a backdrop of rising month-end dollar demand from manufacturers and oil importers, the Kenyan shilling plunged to a new low against the USD yesterday. Specifically, the USD/KES broke above the 120 big figure yesterday to close the session at 120.72, according to Bloomberg data. Yesterday's depreciation saw the shilling's year-to-date losses against the greenback increase to 6.69%. Kenya's ever-present current account deficit has detracted from the shilling’s resilience, making the currency more vulnerable to external pressures. 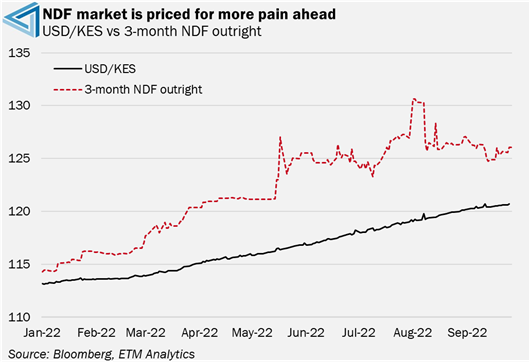 The shilling’s weakness comes despite central bank interventions to try and halt the slide, which has had a notable impact on the country's foreign reserves. Since the beginning of the year, Kenya’s foreign exchange reserves have fallen by 15% to $7.45bn as of September 22. At 4.24 months of import cover, the current level of reserves just about meets the statutory requirement of the central bank to maintain at least four months of import cover.

Month-end dollar demand is likely to persist in the remainder of the week, suggesting that the shilling may remain on the defensive. The non-deliverable forwards market meanwhile continues to price for further depreciation in the near term, with the 3-month outright trading around 4% higher than the spot price.

Bonds are suffering their worst sell-off in decades. The slide in bonds persisted yesterday as markets around the world continued to reprice for higher interest rates, with policymakers showing few signs of a shift away from their aggressive postures. The last two weeks have seen central banks around the world hike rates as inflation pressures continue to run hot.

Regionally, we saw the Central Bank of Nigeria deliver an outsized 150bps rate hike yesterday, while Morocco, in a surprise move, lifted its benchmark policy rate for the first time in more than a decade. This follows a string of rate hikes across the region in previous weeks, with the likes of South Africa, for instance, hiking rates by 75bps last week. 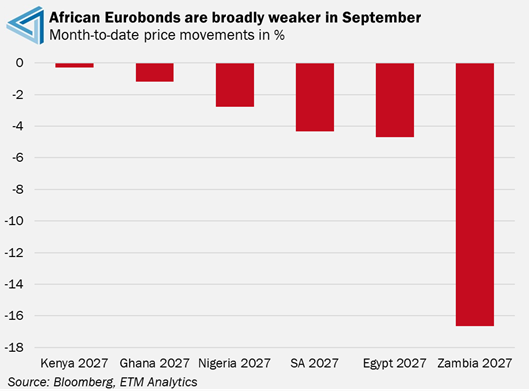 With central banks set to remain steadfast in their fight against inflation against the backdrop of global risk-off conditions, the near-term outlook (3-6 months) for bond markets remains gloomy. That said, with the high base effects of 2022 set to take effect from Q2 next year amidst growing signs of a global recession, the next few months should present an ideal opportunity to enter back into higher beta bonds. That said, investors should be highly pragmatic about which sovereign bond markets they decide to re-enter.

In a move to ease selling pressure on the naira and help anchor inflation expectations, the Central Bank of Nigeria delivered an outsized 150bps rate hike on Tuesday, taking the Monetary Policy Rate (MPR) to 15.50%. Note that the consensus expectation was for a less pronounced 50bps hike. Underpinning the notion that this was a hawkish hike was the fact that almost all of the MPC members (10 out of 12) voted in favour of the 150bps hike.

The Committee highlighted in its policy statement that inflation continues to trend higher, with headline inflation reaching 20.52% y/y in August. The upward trend in inflation has been driven by soaring food prices and a sustained depreciation in the naira, amplifying external price pressures. That said, price pressures are widespread, with core inflation coming in at 17.20% y/y in August. Moreover, the central bank noted that inflation expectations remain elevated, underpinned by the high energy prices. 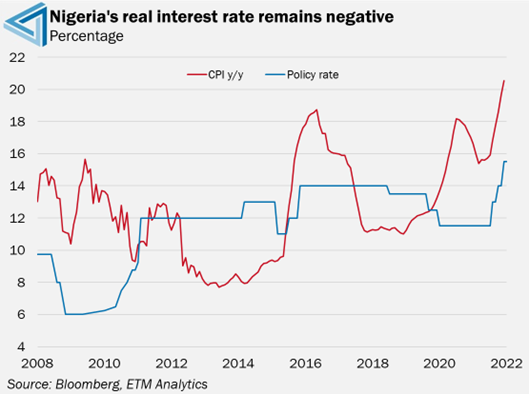 The CBN also pointed out that the ongoing monetary policy tightening by the US Federal Reserve Bank is also putting upward pressure on local currencies across the world, with pass-through to domestic prices, as investors exit these economies to seek higher yields in USD-denominated fixed income securities. The naira has been no exception, with the local currency coming under some notable pressure in recent months.

While the CBN delivered an outsized 150bps rate hike and sent a clear message that it is committed to reining in inflation, it must be noted that Nigeria’s real rate remains deeply negative. This, together with mounting idiosyncratic risks and adverse external conditions, suggest the bearish bias in the NGN is likely to be sustained in the months ahead.