There is now clear evidence that the poorest countries have been the hardest hit from the Covid-led economic impact. And they are also forecast to be the most affected by climate change, which could have even worse economic consequences. According to a poll carried out by BBC, 69% of people in poorer countries have suffered a drop in income (versus 45% in richer countries) making basic amenities such as electricity even more unaffordable.

Global warming has widened the gap between the richest and the poorest nations. For the latter, this has resulted in reduced affordability, which is defined by the proportion of monthly household income spent on utility services such as electricity, gas/heating and water. Pushed, at least in part, by the double-digit returns expected by renewable energy investors, poorer countries resort to using fossil fuels (the most economical option, at least for now) to power their economies. Yet this merely exacerbates their vulnerability to climate change.

On one hand, continued reliance on fossil fuels will result in higher electricity prices in 30 years as most existing fossil fuel consumers in the developed world are pivoting to renewables, resulting in limited (and more expensive) supply of fossil fuels in future. This will put an even greater strain on government balance sheet in the poorest countries. On the other hand, these countries could end up contributing more to global warming and, in turn, increase the costs to human health both domestically and regionally. 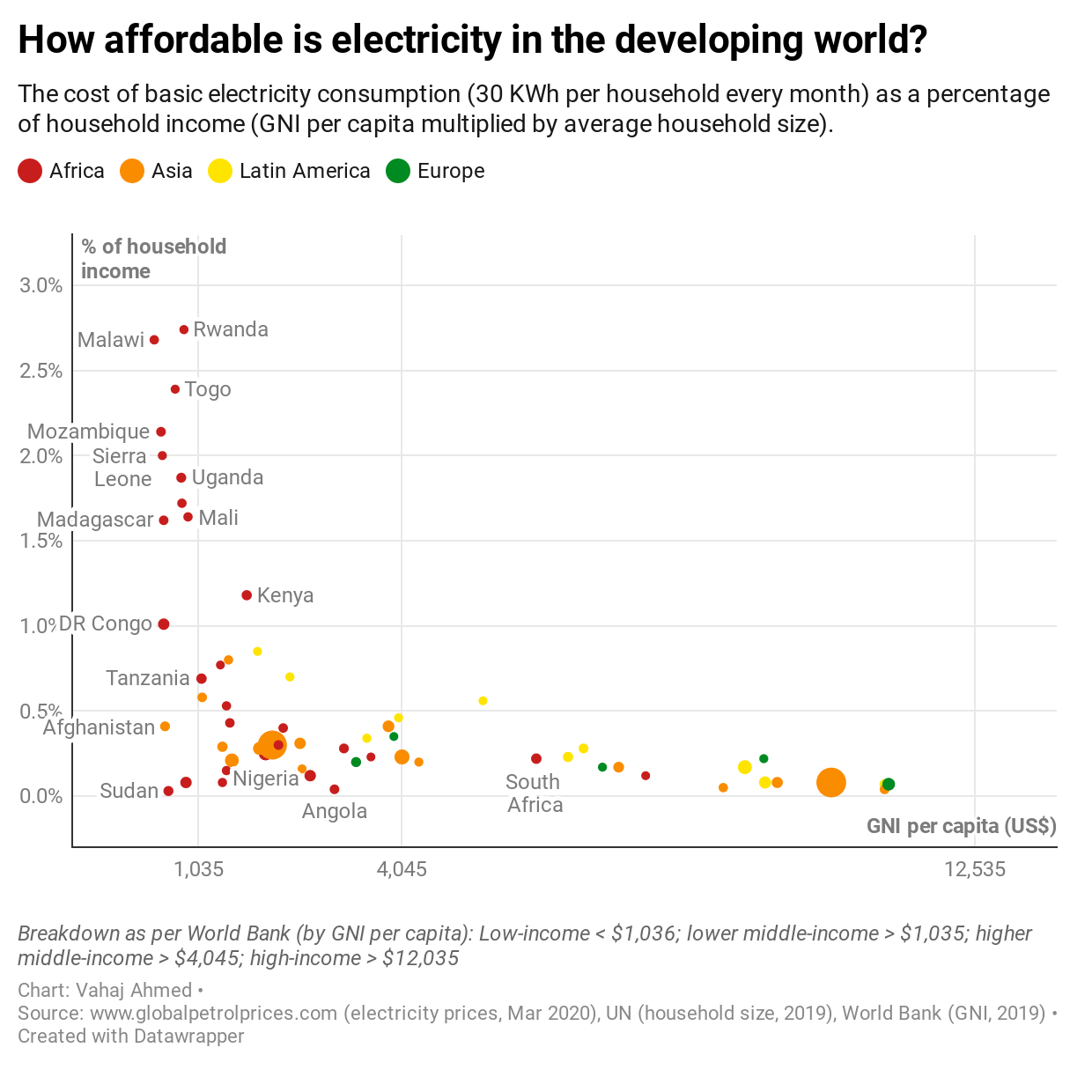 A rise in average global temperature of 1.5-2.0 degrees by 2100 could increase the frequency of floods, forest fires and heat waves in developing countries. In Africa, for example, where 70% of the population depends on subsistence farming, economic hardships from flooding (and droughts) can only be alleviated if farmers have access to reliable and usable weather data. This, coupled with the uphill task of offering mobile money or weather-indexed microinsurance to farmers through technology (such as bKash in Bangladesh, M-Pesa in Kenya or EcoFarmer in Zimbabwe), could be impossible without access to affordable and reliable energy to charge their mobile phones – an economic convenience which is taken for granted in the developed world.

Together we can do so much…

We recently looked at BP’s decision to shift its business from oil and gas to renewables. This is positive for developing countries as it could prompt other international oil companies (IOCs) to support the countries they already operate in and open new markets to renewables. IOCs’ skill at government relations puts them at an advantage to global clean energy investors, allowing them to partner will local utilities (as IOCs did with national oil companies) – mostly natural monopolies – where electricity is considered a public good. These marriages, however, can only work if the IOCs accept single-digit returns from clean energy investments.

The IOCs, however, may first focus on leveraging their existing relationships with developing countries that have: 1) a bigger carbon footprint; 2) an existing distribution grid; and 3) made some progress on a regulatory framework to encourage renewable energy. While this could prove difficult for the poorest countries to garner interest in the short to medium term, there could be some hope through an integrated pan-African grid. For example, Nigeria supplies 5% of its electricity generation to Benin and 3% to Niger under the West African Power Pool (WAPP), which was set up by the Economic Community of West African States (ECOWAS – the regional political and economic union of 15 countries). The oil and gas supermajor Shell may use the ECOWAS platform to encourage distributors to invest in the least-developed countries (LDCs) such as Benin and Niger, despite lacking the close government relationship it has with Nigeria, where it accounts for more than one-fifth of total hydrocarbon production. Having Shell as a reliable clean energy producer across the border in Nigeria could help reduce the supply risk and push distributed innovators into LDCs. The same could be possible in East Africa through the 21-member Common Market for Eastern and Southern Africa (COMESA).

…but it may take only one to tango

Regardless of the increase in grid-based power, the poorest nations should see investments in off-grid solar (and wind) energy systems. But this could be led by mobile network operators rather than IOCs or clean energy investors. In Africa, MTN has already started leveraging its expertise in managing its telecom towers to build out sustainable, off-grid solar-energy storage infrastructure. In partnership with Fenix International (a subsidiary of Engie Africa), MTN has introduced a mobile pay-as-you-go solar energy system called ReadyPay (in Uganda). With the help of financing, the customer makes an initial deposit and repays their loan over 12 to 30 months by way of mobile money payments of as low as US$0.14 per day. Once the loan is fully repaid, the customer has free power for the system’s remaining useful life.

In the post-Covid world, unconventional strategies such as MTN’s will be needed to promote unconventional (or renewable) sources of energy. This presents an opportunity for companies to get creative and disrupt the provision and accessibility of energy in a similar way to how finance in poorer countries has been transformed in recent years.