The South African Reserve Bank (SARB) has released a consultation paper (which can be found here) where it details potential changes towards its Monetary Policy Implementation Framework (MPIF). The MPIF is the central bank’s framework through which changes to monetary policy are implemented. It is not the SARB’s Monetary Policy Framework, which details inflation targets or its outlook for the economy etc. The changes proposed by the SARB include the possible implementation of a “tiered-floor” system to replace the current classical cash reserve or shortage system that is in use. This report will briefly explain why the new system is being considered, the differences compared to the current system, and what potential implications there are if it is introduced.

According to the SARB itself, the current framework of using a classical cash reserve or shortage system, has become less effective over time, especially since the onset of the pandemic. Through this traditional system, the SARB ensures that there are not enough bank reserves circulating in the market by draining excess reserves using various tools, and then lending the missing funds back to the banks at the repo rate,. The central bank has been reviewing its framework for several years now, but the changes to the market since the onset of the COVID-19 pandemic have meant that these efforts are being accelerated. The changes are not only being necessitated by shifts in the market, but also because the SARB risks falling behind international best practice. The new measures proposed will be simpler and more efficient in the transmission of monetary policy changes.

Since the black-swan event of the COVID-19 pandemic, South Africa’s banking system has experienced a large increase in structural liquidity. In the initial stages of the crisis, there was a large reliance on the SARB’s standing facilities, which reflected a loss of confidence in the interbank market. Banks would park excess cash in these facilities despite the punitive interest rates on offer (i.e., lower than what they could receive elsewhere).

This phenomenon has eased over time, but the greater use of these facilities has persisted. Banks are relying less on the interbank market for funding as a result of regulatory changes as well as operational factors. As a result of this, the observed price of bank reserves has not followed the official repo rate as consistently as it did pre-COVID-19. This does not mean that the SARB’s MPIF has broken down completely, but merely shows that it has become less effective and is in need of an update. 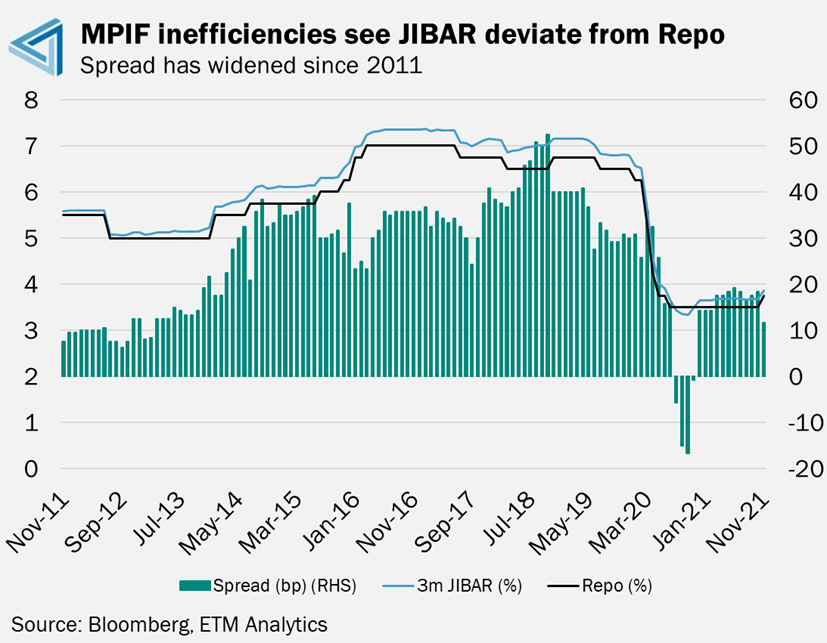 What exactly is changing?

In shifting away from the shortage system, two new frameworks were considered. A mid-corridor system and a floor system. Given the context of the South African market, the latter was deemed most appropriate by the SARB, with the addition of implementing a tiering system. The floor system essentially shifts the onus of managing reserves and liquidity onto the banks themselves. Instead of trying to control a shortage, the central bank will take on excess funds at a set interest rate. The deposit rate will be set at the policy rate, meaning banks are incentivized to simply deposit funds at the central bank. If they are offered funds at a lower rate, they can then deposit them at the SARB in order to make a profit. This prevents any downward pressure from building on interbank rates and will prevent them from falling significantly below the policy rate. The SARB will, at the same time, ensure that the market is saturated with liquidity, preventing shortages that could see rates rise above the policy rate. Combined, these two factors will give a high level of control over interest rates. 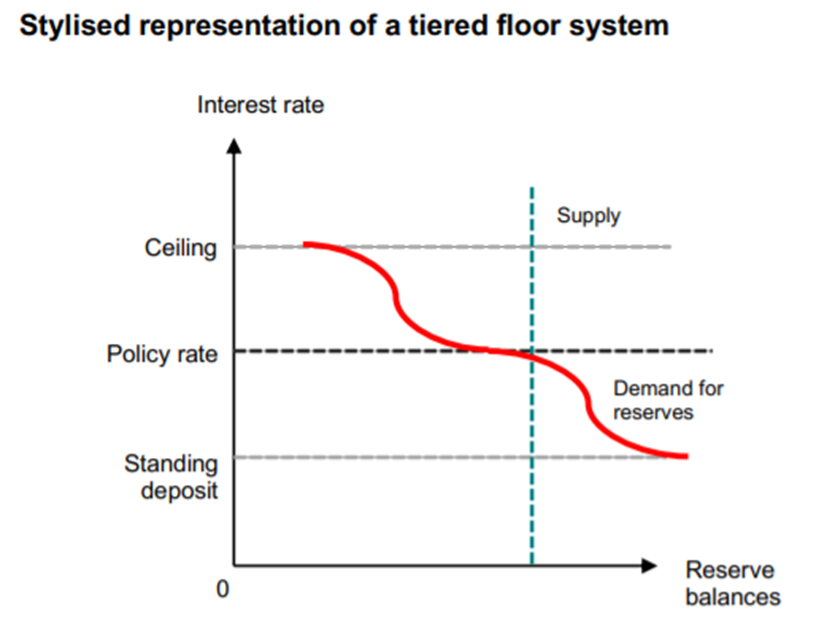 The use of a tiering system comes into play given the aforementioned excess level of structural liquidity within South Africa’s banking system. The tiers mean that funds can be deposited at the SARB up until a point. Beyond that point, any excess funds will attract lesser (or punitive) interest rates. This encourages lending within the interbank market as opposed to simply hoarding funds with the central bank. The SARB acknowledges that the shift may reduce levels of interbank activity, but a tiered-floor system does not need high levels of turnover in order to achieve the levels of reserves held by banks needed to sustain interest rates near the benchmark.

What are the implications?

The main aim of the new framework would be to create greater efficiency within the transmission mechanism of the SARB’s monetary policy changes. This increased efficiency will move interbank rates marginally closer to the repo, improving transmission. The spread is also expected to remain more or less constant over time, so changes in policy will transmit fully.

Greater control over interest rates will help anchor the front-end of the yield curve. The setting of interest rates becomes the return on an overnight deposit at the central bank, which is the safest and most liquid asset. This is a result of arbitrage, as if another asset that is deemed safe and liquid offered a higher yield, banks would sell reserves and buy that asset until the prices matched. If this fails, the other asset would be deemed as having some form of term or risk premium. As the new tiered-floor method seeks to improve the efficiency of this transmission mechanism, pricing of other assets could be constructed more effectively, incorporating term premia, risk premia, and expectations for future policy rates.

One possible negative implication is that a tiered floor system will see demand at Repo auctions decline. The SARB has noted its intention to maintain these auctions, however, even if they come in under-subscribed. Smaller banks may still need to utilise these auctions to build their liquidity positions even if the system as a whole is in surplus. Therefore, smaller banks can still access liquidity directly from the SARB rather than going through the interbank market. The SARB will also be able to use these auctions as a measure of liquidity risk.

It should be noted, however, that the shift will not change the SARB’s Monetary Policy Framework and how it sets its benchmark interest rate. The macroeconomic inputs used in the SARB’s framework will not be changed with a change to the MPIF. The only change would be that the implementation of policy decisions would become more efficient. A common trait of central banks that utilise such a system is that a form of quantitative easing (QE) is also usually implemented. The SARB notes, however, that the implementation of such a system in South Africa does not foreshadow the implementation of QE here. QE programs are implemented when a central bank is constrained by the lower-bound of its effective interest rate, or by zero. This is not the case in South Africa presently. It is also used in the context of deflation risk, which South Africa does not currently face. In South Africa’s context, ample but not excessive liquidity is needed and the SARB’s current balance provides such requirements without the need for any additional expansion via QE methods.

The new MPIF will also not have an impact on inflation within the economy. Although a liquidity surplus will be created, all of the funds will be held within South African Multiple Option Settlement (SAMOS) accounts. It is not possible for banks to make transfers outside of this system in order to lend more money out to economic actors. Therefore, money supply available to the economy will remain largely unchanged, ceteris paribus, meaning inflationary pressures will not build from increased lending.

Finally, the SARB’s ongoing reference rate reform, which aims to replace JIBAR with a more viable benchmark, will not be impacted by the MPIF reform. The SARB would aim to keep the price of bank reserves close to the policy rate, meaning that existing measures such as JIBAR, Sabor, FX-implied rates, and the effective policy rate will only be relied on by the SARB to verify transmission of monetary policy.

Bottom line: The South African Reserve Bank has proposed a shift to a tiered-floor framework in order to improve the efficiency of the transmission of its monetary policy. This will yield financial market stability benefits as a larger supply of safe and liquid assets will be injected into the banking system, without any major adverse macroeconomic consequences. The new framework will also be simpler and more flexible compared to the current shortage-based measures, allowing for better transmission of potential balance sheet policies should another liquidity crisis ensue, as was seen during the early stages of the COVID pandemic.