New IMF leader: What to expect from Georgieva

The IMF has officially selected Kristalina Georgieva as its next Managing Director, with her start date set as 1 October. She is replacing Christine Lagarde (who is likely to replace Mario Draghi at the ECB, in a wonderfully elitist game of musical chairs). Georgieva most recently served as CEO of the World Bank (not to be confused with the Presidency, which is the most senior position at the Bank, currently held by American David Malpass).

So, what does this mean for IMF policies, especially given the looming issue of rising debt levels across the emerging market universe? And how should the IMF deal with Argentina or Ukraine, or membership issues such as quota reform, given the rise of China?

This is difficult to answer – we simply do not know very much about Georgieva’s personal stance on these issues. The following IMF infographic, though, provides plenty of detail on her academic and professional credentials. 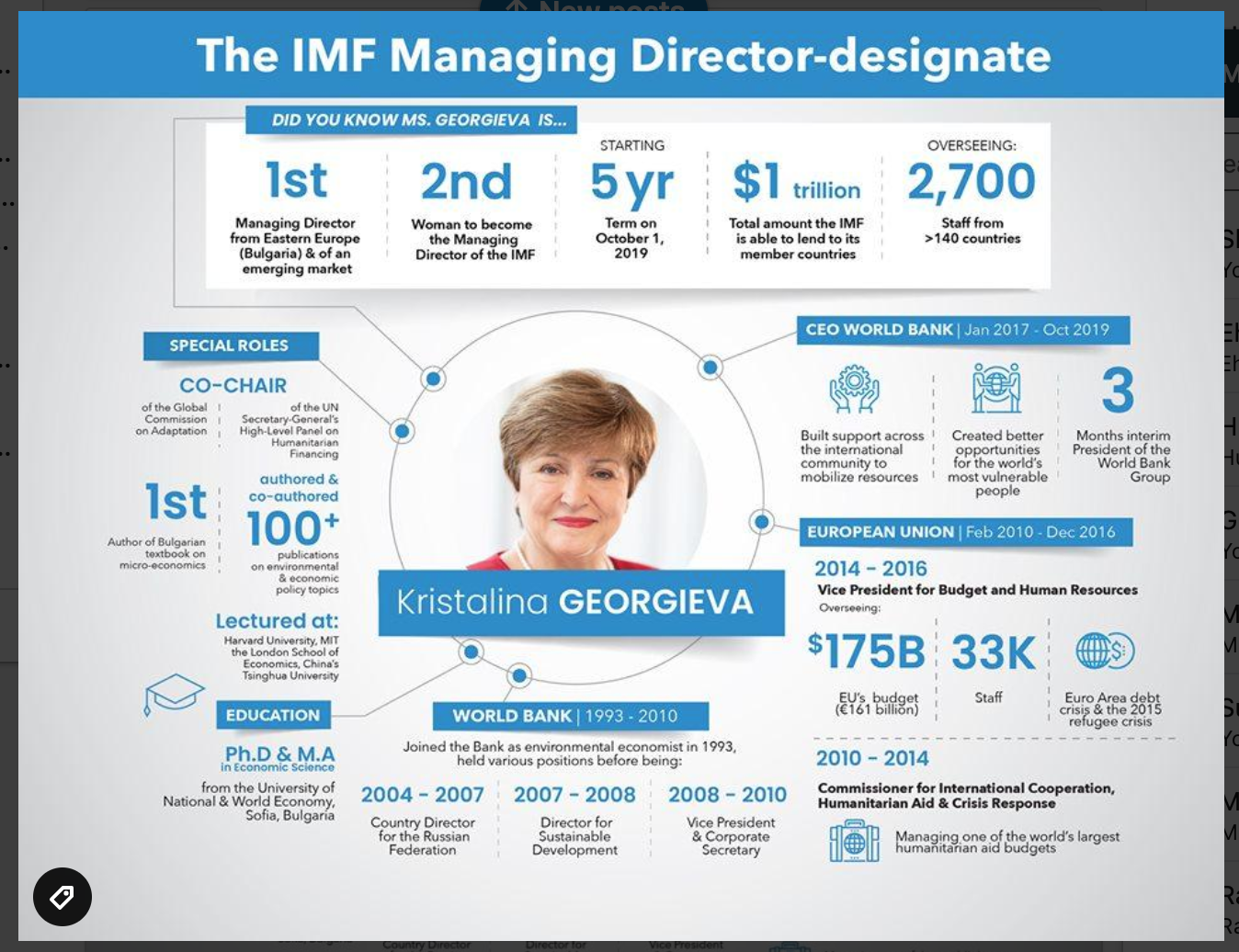 Perhaps, the most noteworthy point is that Georgieva is the first Managing Director (excluding interim leaders) not to be from Northwest Europe or an OECD nation, and is also the first to have grown up under a communist regime. Although Bulgaria might not be sufficiently non-European for the many member countries that have voiced distaste about the legacy system that perennially sees a European-appointed head of the IMF (and an American as head of the World Bank), it does at least represent a mild softening of the traditional system. Perhaps the near appointment of Agustin Carstens, then Governor of the Bank of Mexico, to the MD role in 2011 should have been a sign that the Executive Board would consider deviations from the historical norm.

Moving beyond issues of legacy and norms, however, there is one area that we can safely assume to be part of Georgieva’s influence over the Fund going forward: climate change. In fact, Georgieva joined the World Bank originally in 1993 as an environmental economist and continued to push for the adoption of climate considerations throughout her time at the Bank. Critics or skeptics of Georgieva might be fearful that environmentally oriented policy-making would result in a lack of continuity of Fund policy, particularly at such a critical time.

However, we think these fears can be set aside (at least temporarily) after Georgieva ‘s statement to the Executive Board following her selection, “[t]he IMF is a unique institution with a great history and a world-class staff. I come as a firm believer in its mandate to help ensure the stability of the global economic and financial system through international cooperation. Indeed, in my view, the Fund’s role has never been more important…It is a huge responsibility to be at the helm of the IMF at a time when global economic growth continues to disappoint, trade tensions persist, and debt is at historically high levels." That being said, she also wasted very little time in putting her personal stamp on the Fund’s messaging by adding, "[t]his means also dealing with issues like inequalities, climate risks and rapid technological change".

Ultimately, although it is difficult to say how individual Fund decisions could be impacted, Georgieva’s appointment does represent the most recent instance of a gradual softening at the Fund over the past decade. This includes:

In general, the developing world should welcome any shift away from the “old boys’ club”. There are few people who can match Georgieva’s academic credentials and track record, and who seem as appropriate to lead the Fund into the huge environmental challenges of the 21st century. Unfortunately, we are as yet little wiser about how she will deal with her first major test – the current Argentina program – which Tellimer’s Stuart Culverhouse has analysed in great depth.