A new commodity super-cycle appears to be unfolding with global commodity prices broadly on the rise, underpinned by unprecedented stimulus spending, growth in the US and China, more aggressive environmental policies and sustained dollar weakness. Commodity prices have risen sharply in recent months with the prices of metals, oil and softs recovering all of their losses suffered in 2020. The extent of the rally in global commodity prices is evident when looking at the Bloomberg Commodity Index, which has gained almost 20% on a year-to-date basis. 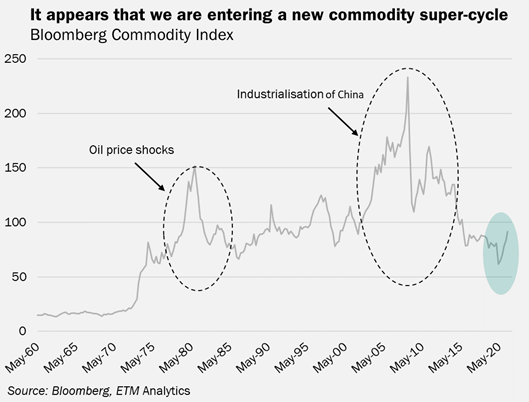 A key driver behind the marked recovery in global commodity prices has been the unprecedented stimulus measures deployed by fiscal and monetary authorities to shore up their respective economies in the wake of the COVID-19 outbreak, which sent the global economy into a free fall in 2020. While economic activity is picking up amid the easing of virus restrictions and progress on the vaccination front, policymakers remain committed to reflating their economies. As such, quantitative easing (QE) has become more entrenched, and although there are signs that some central banks will start to tighten in the months ahead, global liquidity levels will remain elevated.

As central banks continue to prime the printing presses and economies reopen as the global vaccine rollout gains momentum, so a new business cycle begins, creating a new commodity cycle. Commodity prices are also being supported by expectations that the fight against climate change will threaten supplies while at the same time boosting demand for commodities needed to build renewable energy infrastructure and bolster the rotation towards electric vehicles. Given the global shift to greener energy and decarbonisation efforts, the commodity super-cycle is likely to be uneven. Demand for oil, natural gas and coal is expected to be less robust than other commodity classes such as copper, steel and palladium which would be used in the rotation to renewable energy and electric vehicles.

Agricultural commodities have also rallied this year, pushing international food prices to levels not seen since 2014. The Food and Agriculture Organization of the United Nations (FAO) reported earlier this month that international food commodity prices rose for the 11th consecutive month in April, with sugar leading the increase and cereals resuming their upward trend. 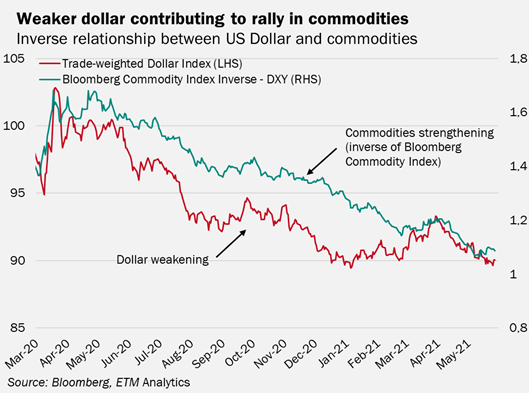 Adding to the bullish bias in commodities this year has been the sustained slide in the dollar. Note that most commodity futures are priced in dollars. Therefore, commodity prices tend to rally on the back of dollar weakness. For context, the trade-weighted dollar (DXY) has pulled back sharply from its peaks seen in the first half of last year when there was a mass rotation into the dollar as investors sought safety. The trade-weighted dollar is currently trading near multi-year lows as the combination of the Fed's commitment to "looser for longer" monetary policy and ballooning twin deficits continue to weigh. The short to medium-term outlook for the USD remains bearish, which will be supportive of commodities. 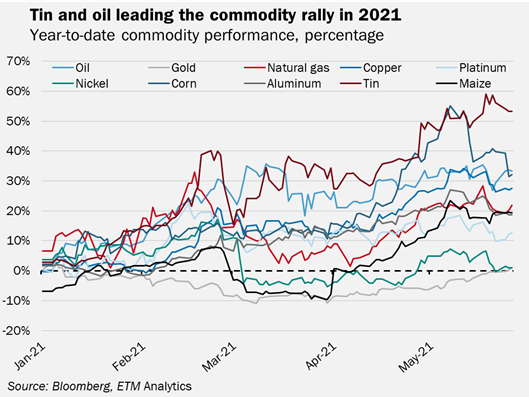 Bottom line: We are bullish on industrial metals and believe that the current price trajectory is fundamentally sound. Predictions of copper reaching $15000/tonne within 18 months and $20000/tonne in the next 36 months seem plausible but are contingent on governments keeping the growth strategies in place. China has recently stated that price volatility is unwelcome, and the state planner has indicated that it will strengthen its controls of crucial commodities. We believe that this will take the froth of the market at the margin. China's trading activity is opaque; they will adopt a strategy that suits the narrative of restocking without creating an overheated market in the process. Longer-term risks to the view include inflation, which is a real risk with all the money washing through the system, which may prompt the tightening of monetary policy, thus crimping growth dynamics. 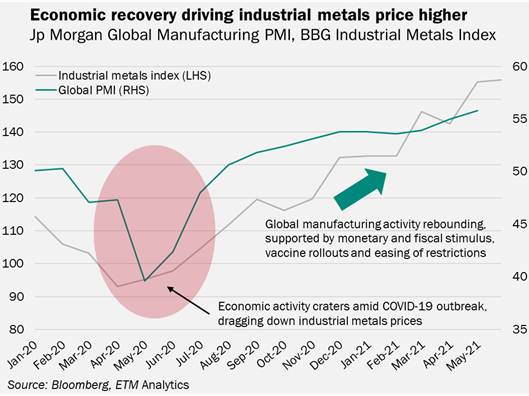 Bottom Line: The global economy is recovering at a fairly robust pace, driving demand for oil which has seen prices surge since the worst of the lockdown. The recovery has been uneven, but it has been strong enough to take ICE Brent back towards $70 per barrel. The upside from here, however, looks more limited at the moment as additional supply could enter the market relatively soon. Therefore, we see Brent as likely to continue to trade around the $70 mark through the year ahead, with risks skewed marginally to the downside. 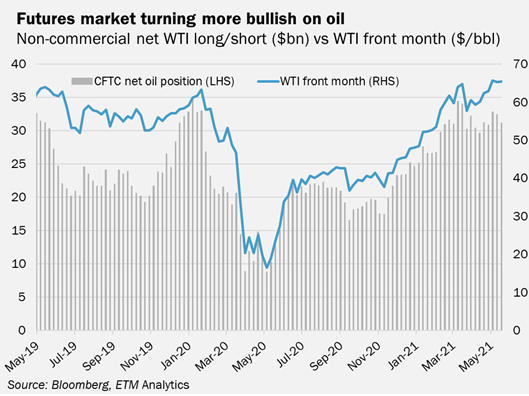 Bottom Line: Given the above-mentioned factors, the outlook for maize/corn prices remains positive in the near-to-medium term. High demand from China, shrinking supplies of corn from major producing countries and increased demand for ethanol use suggest that prices will likely remain well supported. Buoyant maize/corn prices could therefore continue to underpin higher global food prices. Food price increases, combined with reduced incomes, will aggravate chronic and acute hunger, hitting vulnerable households in almost every country as well as stoke inflationary pressures, which policymakers across the board will closely monitor. 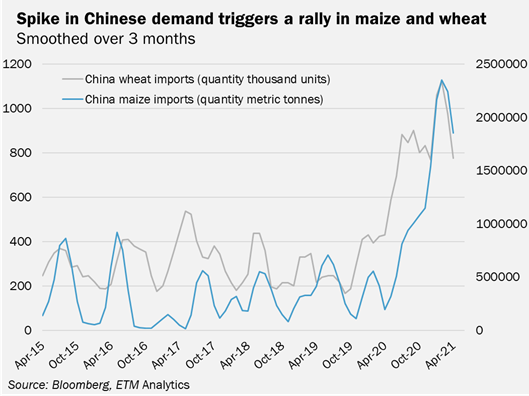 Bottom Line: The broader bias for soft commodities is bullish. The degree of bullishness for sugar and coffee is however dependent on incoming weather in Brazil. Given the droughts that growing communities in Brazil have faced, risks are tilted in favour of a decline in the supply of sugar and coffee out of Brazil. That said, the latest weather reports suggest that above-normal rains are on the way, which could help boost the country's output of both commodities. Increased production in other parts of the world will help offset part of the slide in Brazilian supply. On the demand side, while risks relating to a drop in demand for soft commodities persist, global demand is expected to recover in the months ahead, which should help keep prices buoyed. 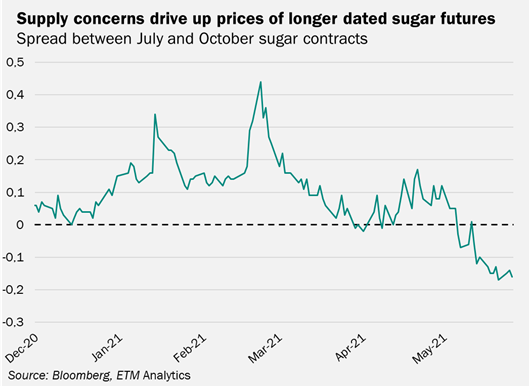