Oil prices have gapped sharply lower this morning as commodities in general have taken a battering from growing recession concerns. US consumer spending declined in May in real terms, while in Asia this morning, a raft of PMI figures have shown weakening conditions for manufacturers. As a result, Brent futures plunged back down to around $108.90 per barrel, sliding below some key technical support levels in the process.

Given a weakening demand outlook, it is very likely to be a volatile period for oil prices. Deepening recession fears will weigh on fuel product prices and drag refining margins lower. However, supply is still tight and liquidity conditions thin, keeping fundamentals relatively tight, which could see the kind of sharp price swings that have occurred in recent months persist for now. Speaking of supply, there were no surprises from yesterday’s OPEC+ meeting, with the cartel and its allies rubberstamping a 648k barrel per day increase for August. There were no discussions around September’s output levels, suggesting that we will have to wait until the next meeting to see what the cartel does now that the pandemic-related output cuts have been removed.

Bonds have continued their bullish run, beginning the second half of the year with US 10yr yields back below 3.00% as recession fears are mounting. This puts USTs on track for the best week in seven, while the bullish bias has spread towards other markets, with Australian benchmark yields sliding more than 20bp in early trade this morning. German and UK yields also plunged yesterday, likely driven partially by month-end flows but also building fears over an economic slowdown. This follows from some weaker-than-expected personal spending data out of the US yesterday, and weak PMI figures out of Asia this morning.

Growth: Growth dynamics were at the forefront of the sub-Saharan African region yesterday. Botswana, Egypt, Namibia, and Zambia all released their Q1 readings. It was a mixed bag, with growth slowing in Egypt and Zambia while Botswana and Namibia saw their growth rates quicken. Egypt’s GDP growth rate slowed to 0.8% q/q in Q1 from 4.6% q/q in Q4, reflecting the impact of the war in Ukraine, which triggered higher commodity prices, disruptions to wheat supply, lower tourist inflows, and portfolio outflows. Meanwhile, economic growth in Zambia slowed to 2.4% y/y  in Q1 from an upwardly revised growth rate of 5.0% y/y in Q4. This was the slowest pace of growth in the economy since Q1 2021 and was a result of negative contributions from sectors like mining, construction and manufacturing. Botswana and Namibia bucked the trend. Botswana’s GDP rose to 7% y/y in Q1 from 5.6% in Q4. The strong growth was attributed to real value-added of mining & quarrying and manufacturing, which rose by 23.2% and 10.3%, respectively. Meanwhile, Namibia’s economic growth rate accelerated to 5.3% y/y in the first three months of 2022 from a revised growth rate of 3.5%(prior:3.3) in Q4. The strong growth reading was mainly driven by the resurgent mining and quarrying sector, which registered a robust growth rate of 23.5%, while the manufacturing sector grew by 7.5%. The Q1 GDP reading means that this is the first time Namibia has recorded four consecutive quarters of growth since 2018. That said, it should be noted that low base effects played a role in the reading. Going forward, it remains to be seen whether this growth will be sustained amid headwinds such as the war in Ukraine, global supply chain disruptions, climatic swings, and higher food and oil prices.

Democratic Republic of Congo: Following the completion of a loan review, the International Monetary fund has agreed to disburse $203mn as part of the next installment of its $1.5bn, three-year loan program with the DRC. The IMF praised the reforms the government has implemented, most visibly halting central bank financing to the government. The $203mn disbursement will bring the total funding to date under the loan program to $653mn. According to the Washington-based lender, the DRC's economic growth outlook remains favourable due to high mineral revenue. However, concerns persist about the impact of the war in Ukraine on prices and budget pressure caused by government fuel subsidies.

Nigeria: Policymaker Festus Adenikinju called for the central bank to aggressively hike interest rates to combat robust inflation. Festus Adenikinju was quoted as saying, "I am not sure that a one-off increase in the policy rate would do the magic of reining inflation." Adenikinju, who voted for a rate hike in May, added that the bank should be "overly aggressive" in addressing inflation which he called "a major threat to economic growth and employment generation." The CBN's rhetoric has shifted to price stability in recent weeks over FX stability and growth, and we, therefore, see the risk of further policy tightening in the near term.

Nigeria: Ratings agency Fitch said that the decision by the Central Bank of Nigeria to raise interest rates sharply in May does not signal a fundamental shift in the country's unorthodox monetary policy, which will continue to impede efforts to rein inflation. Furthermore, Fitch expects the complex policy approach to be maintained at least until the presidential elections in February 2023. Meanwhile, a significant strengthening of macroeconomic performance is seen as unlikely in the near term, despite the supportive effects of higher global oil prices for the economy.

Uganda: The World Bank said that the war in Ukraine and tightening global financial conditions are increasing uncertainty over financing the country’s 1,443kmn crude oil export pipeline. The bank added that the Russian group's backing of Uganda's oil development is unclear amid the war and subsequent sanctions. Meanwhile, the pipeline is also seen as being constrained by environmental concerns. Activists have protested the project, alleging environmental and human rights concerns. These headwinds could dampen expectations of the significant forex exchange inflows and notable contribution to GDP growth Uganda's oil sector is set to make in the coming years.

Forex: Ghanaian cedi plunges to its weakest level on record

The final trading session of the month and Q2 saw the Ghanaian cedi depreciate further to close at its weakest level since 1994 when Bloomberg started publishing data on the cedi. The cedi closed above the 8.00 per dollar, extending its year-to-date drop to around 30%. A deteriorating fiscal outlook and an unfavourable external environment have been two of the main forces weighing on the cedi this year. Ghanaian debt is expected to continue rising at an alarming rate despite recent government interventions, and this has triggered a rotation out of cedi bonds by foreign investors. Note that Ghana is classified as a being at high risk of debt distress by the International Monetary Fund. 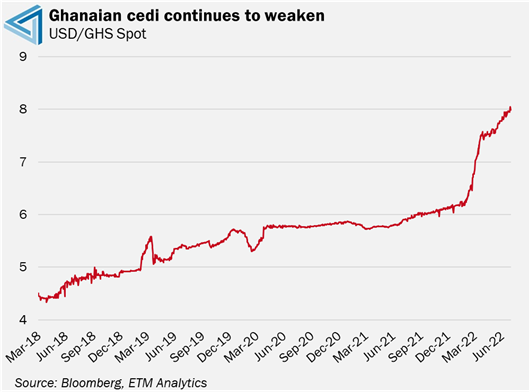 Compounding the pressure on the cedi has been the tightening of global financial conditions as major central banks globally tighten monetary policy to curb soaring inflation and inflation expectations. Higher borrowing costs externally and Ghana’s inability to enter the Eurobond market in the face of sovereign rating downgrades have meant that it is unable to access the inflows its needs to bolster its reserve position to support the currency. A dollar shortage has therefore placed further pressure on the currency. Recently reports surfaced that Ghana is reluctant to spend its limited dollars on importing fuel, raising concerns that a fuel shortage looms in the country.

The measures and strategies to alter Ghana’s current fiscal trajectory and support the cedi are yet to fully take effect, and calls are starting to grow that Ghana looks to the IMF assistance. Nevertheless, the government has remained defiant, insisting on “homegrown solutions.” Overall the outlook for the cedi remains decidedly bearish in the near term amid a weak fiscal outlook and challenging external conditions. Non-deliverable forwards are pricing for depreciation to over GHS10 per dollar in the next 12 months.

The end of the month brought with it several inflation prints out of Sub-Saharan Africa. The data confirmed that inflation pressures in Africa are building amid weakening currencies, elevated commodity prices and persistent supply chain shortages. Data released on Thursday showed that headline inflation in Kenya and Uganda accelerated further in June. 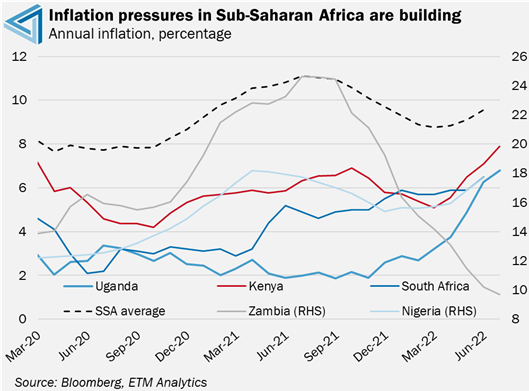 While it is encouraging that inflation in Zambia moderated last month, it must be noted that the slowdown comes on the back of high base effects and a fuel subsidy that comes to an end in September. We still assess inflation risks in Zambia to be skewed firmly to the upside. The broad-based inflation pressures suggest that we will almost certainly see more rate hikes across the board in the months to come as regional central banks look to rein in inflation.

African central banks will want to maintain their respective monetary policy differentials with the US. Therefore, with the US raising interest rates aggressively, we expect African central banks to follow suit. This should continue to underpin the broader bear flattening bias we have seen across African bond markets in Q3. That said, with global recession risks rising rapidly, we expect that flattening bias to come to an end towards the end of the year, with central banks likely to turn less hawkish later this year or early in 2023.

OPEC+ has increased its oil production quotas in an effort to reduce high oil prices. However, in May only two of the OPEC+ countries managed to produce more than their target. In June not much has changed with only three countries producing above their output quota. Most of the OPEC+ nations are already producing at their maximum capacity, so even with higher quotas, it is unlikely that supply is going to improve. 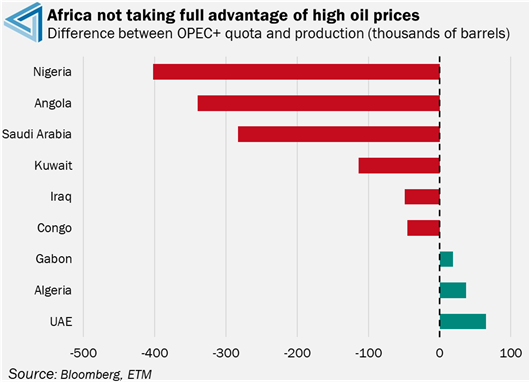 We can see that some of the major oil-producing African countries were unable to reach their respective OPEC+ production quotas. This is partly due to a lack of infrastructure and investment. Therefore, even though the countries have the capacity and availability to produce more oil, they do not actually have the ability.

With oil prices at such high levels, African countries are missing out on the opportunity to earn more from their exports if they were able to increase their production. In some of the African countries, such as Nigeria and Angola, a lot of their oil is located in remote areas where security risks are an issue. As such, investors see those areas as being too risky to invest.

OPEC+ stuck to its plan to boost oil output by 648000 barrels a day in August. It is becoming clear that OPEC+ members cannot actually increase production as quickly as expected. Therefore, oil prices are expected to remain elevated as supply concerns persist. The extent of the supply pressures is being emphasised by the majority of OPEC+ members producing below their respective target production levels.