Core market bonds returned to their weakening ways yesterday, with UST, gilt, and bund yields all rising through the session as the market remains focused on upside inflation risks and the possibility of even more hawkish central bank action. The 2yr Treasury breached the 4.600% level and the 10yr benchmark the 4.250% level, while gilts weakened once again as the political and economic outlook for the country remains as uncertain as ever following the Prime Minister's resignation. Bunds, meanwhile, were pressured by Wednesday's announcement from the DFA that it would increase the amount of securities it can lend to traders in the repo market.

Egypt: In a poll conducted by Reuters, the Egyptian pound is forecast to decline at a steeper-than-expected pace. According to the poll, the pound, which traded at 19.61 to the dollar on Wednesday, is expected to fall to 21.16 by the end of the current fiscal year and as far as 22.08 by the end of the next. This compared with a July poll which had forecast a more conservative devaluation, reaching 19.86 by the end of the 2023/24 fiscal year. With reports suggesting Egypt is close to reaching a deal with IMF, traders in the FX derivatives market have upped their bets that the pound will weaken. A more flexible exchange rate has been cited as one of the conditions for a new financing pro-gram from the lender.

Ghana: Ghana’s National Petroleum Corp. Chief Executive Officer has said that the delayed natural liquefied natural gas import terminal is set to be completed in 2023, as talks continue with Shell Plc for the supply of fuel to the project. Tema’s LNG Terminal, which was projected to become operational as early as 2020, is a central part of Ghana’s plans to become a gas hub. Ghana mainly plans to use gas for power generation. Note that some West African countries are embracing the use of gas as part of an effort to bring electricity to more people.

Morocco: Headline inflation in Morocco accelerated further in September, coming in at a fresh high of 8.3% y/y from 8.0% y/y in August. On a month-on-month basis, consumer price inflation rose 1% in September. With inflation continuing to surge in Morocco, we could see Bank al-Maghrib deliver another rate hike at the next meeting. In September, the central bank hiked its policy rate by 50bp to 2% in a bid to curb inflation after keeping it unchanged for eight straight quarters.

Namibia: According to the Managing Director of the National Petroleum Corp. of Namibia, Shell is planning to start drilling the first of three potential appraisal wells in the first week of December. Recall Shell discovered oil in Namibia earlier this year and needs to study the extent and size of the field before it can start developing it. Meanwhile, TotalEnergies is separately planning two wells, with the first expected in Q1 next year, while the development of the Venus discovery will start by 2025. The discoveries by TotalEnergies and Shell could make Namibia the latest oil producer along the African Atlantic coast, bringing significant benefits to the economy.

Oil: Oil has had a choppy week so far as traders balance economic slowdown risks with tight supply conditions. Brent has risen to near $93 per barrel this morning after failing yesterday to break above the 50DMA at $93.22 and test the $95 level. The market was boosted yester-day by some positive news out of China, as there were suggestions that some of the country’s travel curbs could be eased. However, a strong dollar and recession risks for many major economies have prevented the bulls from gaining complete control. While the supply situation will remain tight and prevent a major sell-off for crude for now, its upside will also remain fairly capped until we start to see signs that global central banks will ease off the tightening pedal and prevent their economies from heading into a protracted economic slump.

Forex: Nigerian naira plunges to a fresh low in the parallel market

Declining foreign exchange reserves and strong demand for imports have resulted in the Central Bank of Nigerian rationing the supply of dollars, thereby exacerbating the dollar shortages. Note that Nigeria's foreign currency reserves have fallen in six out of the past nine months amid dwindling oil production due to theft and vandalism. Dollar shortages on the official market have funelled demand to unofficial sources, thereby pressuring the naira in the parallel market.

As the dislocation between Nigeria's official and parallel currency markets continues to widen, risks continue to build for the CBN to devalue its currency again to narrow the gap. The official rate remains significantly overvalued on a real effective rate basis, suggesting there is room for weakening. That said, the devaluation might not likely happen until after next year's presidential elections. 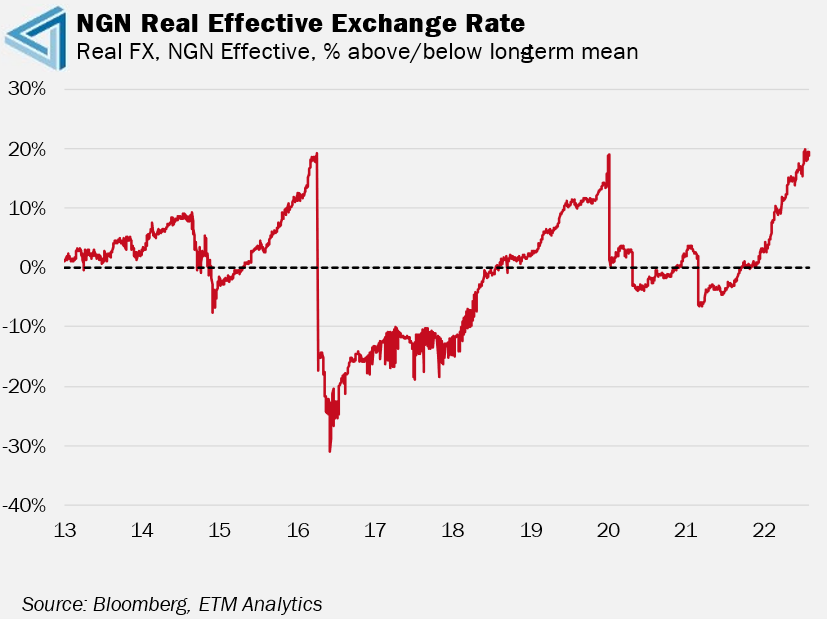 Focus in the fixed income market is also centred on Nigeria this morning after the government announced that it plans to convert at least NGN 20trn of loans from the central bank to 40-year bonds. This is the first time the Nigerian government has resorted to these unconventional measures. The move comes as fiscal pressures mount amid surging debt servicing costs.

President Mahummadu Buhari approved the debt restructuring plan. The government used the loans from the central bank to plug the budget shortfalls in recent years as revenue from the oil sector dwindled. Commenting on the debt restructuring, Patience Oniha, head of Nigeria’s debt management office, said, “it is a one-time restructuring repayable over 40 years with a moratorium. Oniha added that the timing of the debt conversion would be announced after the government seeks approval from the cabinet and lawmakers later this year.

Finance Minister Zainab Ahmed expects the country’s total debt stock to increase to about 35% of gross domestic product from 23% after the central bank loans are converted. While Nigeria’s debt-to-GDP ratio is modest in comparison to many of its African peers, fiscal pressures in Nigeria are acute, given how high the country’s debt servicing costs are. Note that Nigeria’s debt servicing to revenue ratio sits north of 80%. Minister Ahmed said that the government is working on reducing the ratio to around 50% in the medium term and eventually 30% in the long term by boosting government income. Until there is a meaningful improvement in Nigeria’s tax collection and the debt servicing to revenue ratio is drastically reduced, we expect a significant fiscal premium to remain baked into Nigerian bonds. 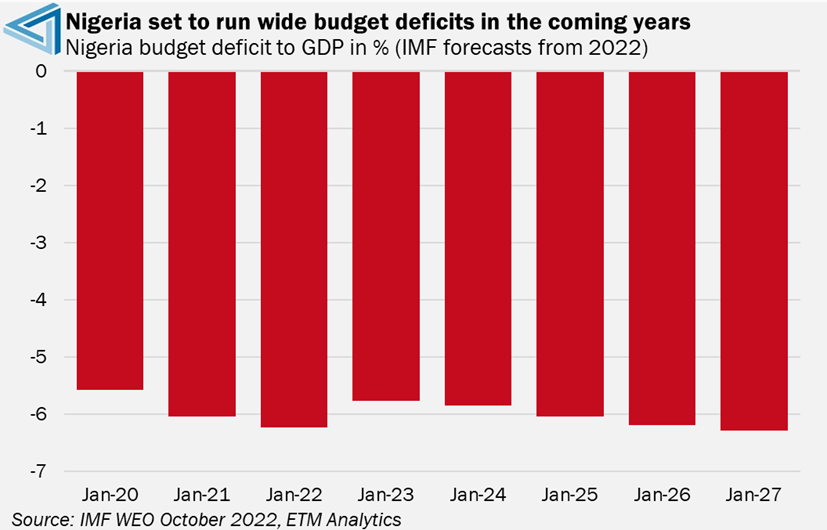 The central bank of Botswana left interest rates unchanged at their October MPC meeting, potentially signalling that African central banks are starting to become less aggressive in their tightening stance. Inflation still remains elevated in Africa as currency weakness persists, however fuel and food prices have started to ease, which may be providing some relief. The risk is if the Fed continues to tighten monetary policy, and African countries that were already behind the curve start to dial back their hawkishness, currency weakness and capital outflows will be exacerbated.

Botswana’s monetary policy committee expects inflation to remain above the target range of 3-6% in the medium term and to return to inside the band in the third quarter of 2024. The decision to keep rates unchanged was likely supported by the policy measures that have been introduced in order to bring down inflation. Such as lowering value-added tax (VAT) and decreasing fuel prices.

If currency weakness persists, the central bank could be forced into hiking rates at the December meeting or early next year. The Botswana pula has depreciated by 12.7% on a year-to-date basis against the USD, and the central bank appears to be defending the local currency from weakening past the 13.60/USD mark as it would result in the currency trading in unchartered territory, with increased risk of selling pressure 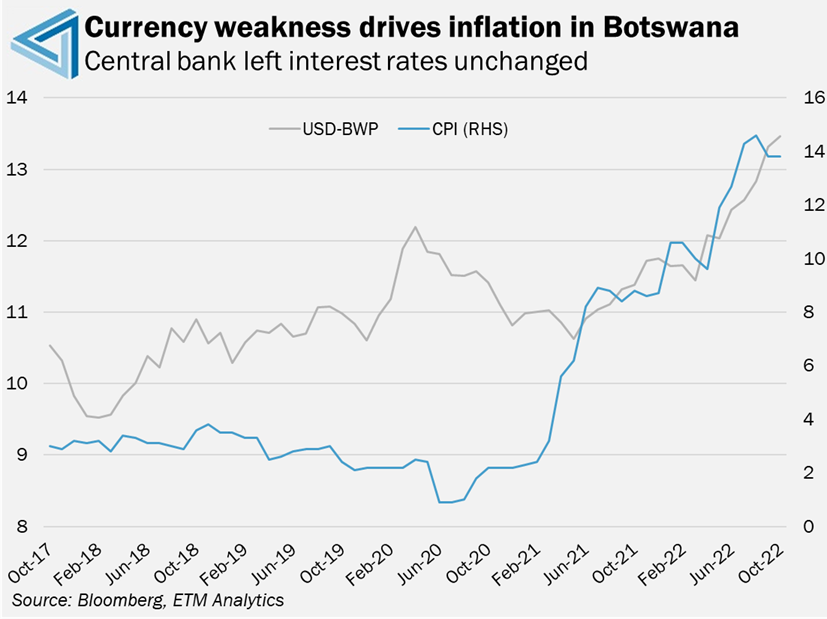