The deal between Armenia and Azerbaijan draws to a close the latest conflict (which lasted six weeks) in the Nagorno-Karabakh region. The deal is likely more of a ceasefire than a peace deal.

It does not settle rival claims to sovereignty between Armenia and Azerbaijan over the entire disputed region. And the deal is merely one move in one part of the wider game of geopolitical chess between Russia and Turkey.

As such, it is entirely consistent with our view that while both Russia and Turkey cannot avoid conflict (in the vacuum resulting from the US's loss of interest in much of the rest of the world), both also cannot afford war. For those who did not share this view there may be some relief that this proxy hostility has paused.

The deal yields benefits for Azerbaijan (secured territorial gains), Turkey (demonstrates the influence it can exert in the South Caucasus region, which, in turn, gives it leverage in other areas of competition with Russia, ie Syria and Libya-East Mediterranean), and Russia (maintained its relations with both Armenia and Azerbaijan, and its peace-keeping troops on the ground may actually have increased its direct leverage with both sides).

On the other hand, Armenia Prime Minister Nikol Pashinyan is left to deal with the domestic political backlash from what will be perceived as a surrender, and to consider whether he needs to abandon his hopes of charting an independent foreign policy course and align more closely with Russia to prepare for the next round of conflict in Nagorno-Karabakh. 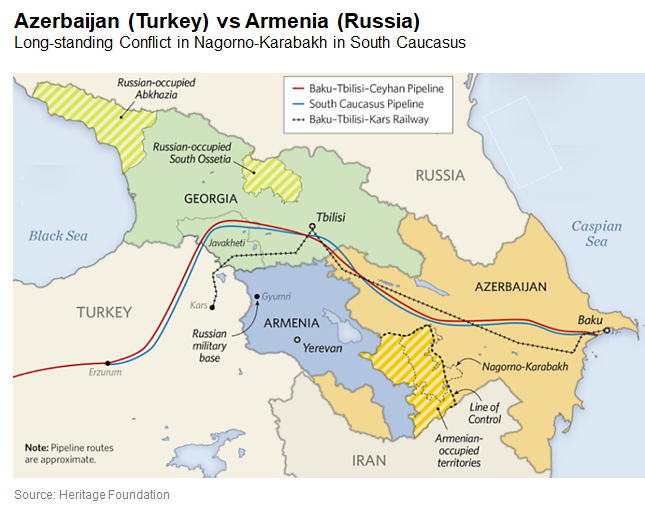