Myanmar: Ideal market for digital payments, and now Ant Financial is buying in

Ant Financial (the operator of Alipay, and an affiliate company of Alibaba) plans to invest US$73.5 million in Myanmar’s digital payments platform, Wave Money. The investment will buy Ant Financial a substantial minority stake, alongside existing shareholders Yoma Group and Telenor. We think Ant Financial, with its global expertise, could help Wave Money more fully capture the opportunities for digital payments in Myanmar by increasing use cases such as international remittances, lending and insurance along with improvement in digital infrastructure and user experience. Relative to neighbouring economies, Myanmar has much lower bank account penetration and higher levels of cash utilisation; it could therefore be a fertile hunting ground for digital payments operators.

Digital payments adoption rates in Myanmar have been growing strongly in recent few years. A survey by Kantar TNS, a UK-based market research firm, shows that for people who send and receive money domestically, less than 1% used mobile money in 2016, while this number had exploded to 80% in 2019.

Telecoms, banks and independent operators are all active in digital payments

Currently the Central Bank of Myanmar has licenced only five non-banks to provide mobile financial services (compared to 33 licences issued by State Bank of Vietnam). The five are: Wave Money, M-Pitesan, OK$, My Money, MPT Money.

In addition to these five non-banks, commercial banks are also active in this space, with various banks having their own digital wallet. For example, KBZ Pay is operated by KBZ Bank, CB Pay by CB Bank, OnePay is a group company of AGD Bank, and Ongo has a partnership with MOB Bank. 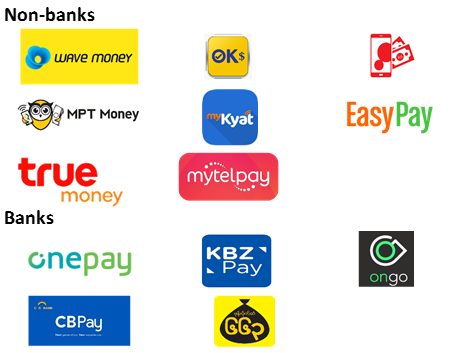 Wave Money is the leading digital wallet in Myanmar. A joint venture between Telenor and Yoma Group, Wave Money was the first operator to receive a mobile financial services licence from the Central Bank of Myanmar, in 2016. It has subsequently grown strongly and is currently the leading operator in Myanmar with more than 21mn users (49% of the adult population), and over 55,000 agents covering 89% of Myanmar’s territory. The platform had already moved into positive EBITDA territory in 2018. In 2019, it transacted US$4.3bn through its platform (up by more than 200% yoy), which is equivalent to c6% of Myanmar’s GDP, but there is still significant room for growth. For example, Kenya (where M-Pesa has an estimated 85% market share in digital transactions) handled transactions of US$43bn in 2019 (equivalent to 43% of Kenya’s GDP).

With Ant Financial’s expertise, Wave Money could expand its product offerings and strengthen its market position. Ant Financial is the highest-valued fintech in the world (US$150bn as of the 2018 funding round) and its payments arm Alipay is the world’s most popular digital wallet platform, with around 1.2bn users. With such a wide portfolio of relevant businesses, we think Ant Financial could help Wave Money better capture the full potential of Myanmar’s digital payments industry, by sharpening its focus on merchant payments and lifting the number of use cases by introducing new products such as international remittances, lending and insurance. In addition, Ant Financial could help to improve Wave Money’s digital infrastructure and its user experience.

Ant Financial has an extensive presence in Asia. It has invested in various digital payments platforms in Asia including bKash in Bangladesh (investment of cUS$160mn), Easypaisa in Pakistan (a Telenor group company, investment of US$185mn), Vietnam’s eMonkey, India’s PayTM, Ascend Money in Thailand, Mynt in Philippines and Emtek in Indonesia, among others.

Yoma Strategic Holdings can also help develop Wave Money’s business, as a 30% shareholder. It is listed on the main board of the Singapore Securities Exchange Trading Limited and is a leading corporation in Myanmar with a diversified portfolio of businesses in Real Estate, Consumer, Automotive & Heavy Equipment, Financial Services and Investments.