Global bond yields surged last week, with US 10yr yields nearing 3.00% while benchmark gilts have closed in on 2.500%. The market has increased its bets that policymakers from the US and Europe will continue with their hawkish policy stances despite the more uncertain growth outlook that is emerging. This view was corroborated by the latest CFTC data, which shows that net shorts on US Treasury futures rose to their highest since 2018.

The market is clearly pricing in for central banks to commit to their inflation-fighting positions at this week’s Jackson Hole symposium, which will be the week's main event and will very likely drive sentiment into the final stages of Q3. With global bond yields likely to remain elevated leading up to the event, risk assets will remain under a bit of pressure as a result and we will need to see some tempering of rate hike risk for equities and emerging market assets to resume the kind of gains seen at the earlier stages of this month.

The USD surged last week and, although off its highs, is consolidating those gains this morning. More hawkish Fedspeak on Friday and the upcoming Jackson Hole Symposium, where central bankers will extol the virtues of higher rates, will keep equity markets on the defensive and the USD on the front foot. Higher levels of risk aversion and the rising risk of a global recession keep investors inclined to back the USD even though there is a lot of monetary tightening and monetary policy differentials already priced into the USD. The EUR-USD has slipped back towards parity, trading at just 1.0038 at writing, while the GBP has arguably fared even worse, crashing to 1.1828, as both pairs look to break below the prior lows achieved in mid-July. A break of those lows opens the door for a deeper correction.

Kenya: Due to government delays in paying subsidies meant to keep the price of gasoline low, oil marketers in Kenya have warned of fuel shortages. The companies are reportedly owed KES 65bn ($542mn) for supplying fuel for the three months since June. These companies are supposed to be paid monthly. According to industry executives, "the impact on oil marketing companies is so substantial that they will face immense financial constraints to be able to continue with uninterrupted supply." The threat of fuel shortages comes just months after Kenya suffered its worst fuel crisis in a decade and could further drive inflation pressures in the economy. It is worth noting that the government has spent KES 118bn to subsidize fuel prices since April 2021, and it plans to end the program by December, given the spending is not sustainable as debt rises.

Kenya: In a gazette notice, National Treasury is seeking to increase the 2022-23 tax income by 13% y/y to KES 2.07trn ($17.3bn). Moreover, the National Treasury projects net domestic borrowing at KES 579.05bn and KES 461.4bn in local redemptions, bringing internal borrowing to KES 1.04trn. National Treasury also expects external loans and grants of KES 349.3bn in the fiscal year and has received KES27.85bn so far. Meanwhile, Kenya spent KES83.97bn, about two-thirds of taxes collected, to repay debt in the first month of the fiscal year through June 2023.

Morocco: Headline inflation in Morocco accelerated further in July, coming in at 7.7% y/y from 7.2% y/y in the month prior. This was the fastest pace of price growth in the economy since 1995 and was driven by an increase in food prices by 12% and the cost of transportation by more than 18%. With inflation notably above the central bank's 2% target and risks tilted to the upside, policymakers could vote in favour of a rate hike at the September meeting. Note that Bank Al-Maghrib has not adjusted its key interest rate since June 2020, keeping it at 1.5%.

Nigeria: On Friday, the International Air Transport Association (IATA) said that Nigeria owes international airlines $464mn. According to IATA, the owed amount represents the revenues the Nigerian government has blocked from repatriating by the end of July. IATA had previously warned the Nigerian government that failing to timely repatriate airline revenues would hurt Nigeria with reduced air connectivity, and the planned withdrawal of Emirates Airlines from flying Nigerian routes from September 1 shows that warning coming true. The risk is that more damage could be done with expectations that more airlines could follow suit should the Central Bank of Nigeria, which restricts access to foreign currency to tackle a severe dollar shortage, does not address the Emirates airlines issue.

Tanzania: As part of measures to lure tourists and triple arrivals into Kenya over the next 24 months, Tanzania has installed high-speed internet on Mt.Kilimanjaro. According to the minister of information, communication, and information technology, the new connectivity on Africa's highest mountain will initially benefit as many as 1000 climbers on various stages of the trek every day. Coverage will reach the Kilimanjaro summit by the end of the year, and thousands more mountaineers will be able to log in. The minister added that the facility will allow "tourists to access live streaming services, make calls and post their mountain-climbing adventures on social media platforms, thus helping to promote our tourism sector." Projects such as connecting Kilimanjaro's peaks are part of a plan to hasten Tanzania's tourism rebound and ultimately increase arrivals to 5mn annually by 2025. Revenue collections from the mountain are set to improve and further boost the tourism sector's importance, which accounts for most of the nation's foreign-currency earnings after gold exports.

Uganda: Uganda's trade deficit widened by 22% m/m in June to $339mn. According to the finance ministry, the deficit widened as a result of a faster increase in the value of imported goods that offset the rise in export receipts. The value of merchandise imports rose by 11.7% to $710.10mn in June from $635.48mn in May amid an increase in private sector imports. Meanwhile, merchandise export receipts increased to $371.1mn from $357.4mn in May, reflecting a growth rate of 3.8%. This was mainly due to higher coffee exports. The widening trade deficit is likely to detract from the current account balance and, by extension, the currency.

Although the Central Bank of Egypt opted to keep interest rates unchanged and made no exchange rate adjustments last week, traders continue to step up bets that the CBE will eventually let the Egyptian pound depreciate. In the non-deliverables forward market, the currency's 3-,6- and 12-month contracts continued to rise on Friday. The latter slumped to 24.7125 per dollar, its weakest close on record. That is 29% weaker than where the pound is trading in the spot market. 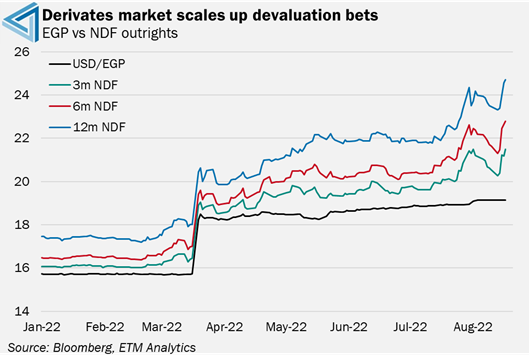 Devaluation bets have risen on the back of speculation that the International Monetary Fund will demand more flexibility in the pound as part of the conditions attached to a new loan package. Moreover, CBE Governor Tarek Amer's departure last week has fuelled bets that the bank will allow further depreciation in the currency, given that Amer was seen as supportive of a stable pound.

While authorities have already devalued the pound by 15% in March, there is much further to go for the currency to reflect its fair value. For context, the pound still remains overvalued on a real effective exchange rate basis. Given the impact of the war on Egypt's economy, it is evident that the country may need a weaker currency to absorb shocks from abroad going forward.

After staging an impressive recovery on the back of positive idiosyncratic developments and the repricing of global interest rates in the previous four weeks, Zambian Eurobonds came under renewed pressure last week. Yields on the front-end and belly of the Eurobond curve ended the week notably higher as global risk sentiment soured and investors rotated out of risky assets into safe havens. For context, Zambia’s shorter-dated 2024 and the 2027 Eurobond yields ended the week 369bps and 172bps higher at 39.56% and 2037%, respectively. 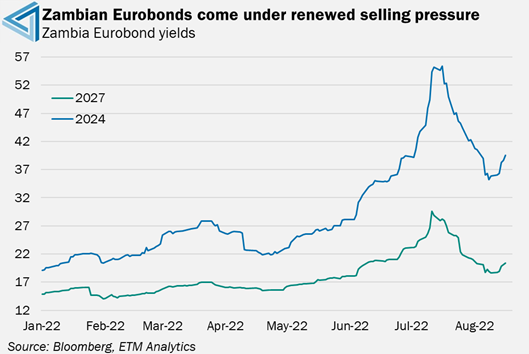 The sell-off in Zambian bonds last week came on the back of a broad-based sell-off in African Eurobonds, with hard currency bond yields in Ghana, Mozambique, Nigeria, Angola and South Africa all closing the week higher. This suggests that much of the weakness in Zambian Eurobonds last week was driven by a deterioration in external conditions rather than adverse domestic developments. With African Eurobonds taking much of their direction from external developments, the focus for investors this week will be on the nuances of Federal Reserve Chair Jerome Powell’s remarks at the Jackson Hole symposium.

The comments from Fed Chair Powell will likely dictate whether the broader flattening bias in global bond markets persists. Investors will be looking for guidance on how many more rate hikes there are on the cards and comments on the economic consequences of the tight monetary conditions. We caution that Fed Chair Powell could deliver a more hawkish tone than some may expect. While we expect the FOMC to remain aggressive in its fight against inflation in the near term, in line with market pricing, we expect a material shift in US monetary policy from mid-2023 in response to mounting recession risks.

Macroeconomic: Mozambique is expected to export its first shipment of LNG to Europe

Mozambique is expected to ship its first cargo of LNG overseas this week. According to Bloomberg ship-tracking data, the LNG tanker British Mentor, operated by BP Plc, is set to arrive this Wednesday at the new floating terminal that Eni SpA is completing off Mozambique’s Northern coastline. 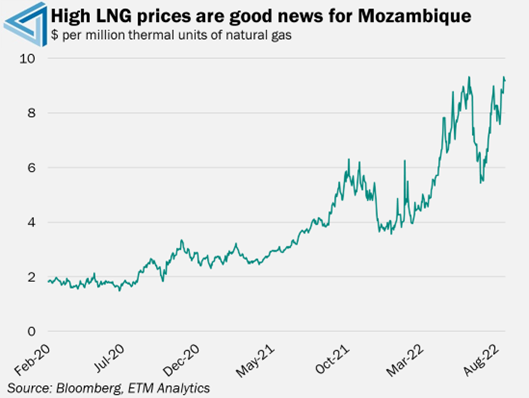 The coral-sub project was aiming to export its first shipment by October. However, as a result of the energy crisis in Europe, the company has pushed the date forward. Europe and the UK are experiencing record energy prices and have warned that the fuel squeeze could prompt rationing and trigger a recession. Europe has become less dependent on Russia and is willing to pay hefty premiums for gas in order to stock up before winter.

The coral-sub is designed to produce 3.4 million metric tons of LNG. With gas prices at such high levels, Mozambique will benefit massively from the project coming online. A second project has been announced. Moreover, the success of the coral sub will likely attract even more investments and projects. In recent years, Mozambique’s economy has been battered by a sovereign debt scandal, environmental disasters and massive security issues. However, the fortune of the economy seems to be turning with the outlook for growth extremely positive. The LNG  boom in Mozambique will help rebuild the economy by increasing foreign investments, creating jobs, and improving the overall fiscal conditions within the country.