US Treasury yields are dipping this morning following yesterday's surge. A slate of Fed officials yesterday quashed any dovish sentiment and expectations that the Fed will be shifting their policy outlook. The rally for yields was driven by the front-end and belly of the curve, with the 2yr tenor closing yesterday at around 3.05%. This, of course, means that the market is pricing in rates rising quite aggressively once again, which will likely plunge the US economy into a period of weak growth. The curve continued to deepen its inversion as a result, with the 2v10 spread trading near -30bp. In terms of rate pricing, the Fed dated OIS contract covering the September meeting is now pricing in 60bp worth of rate hikes, up from levels closer to 50bp seen earlier this week.

Yields are rising in Asian trading this morning to catch up with yesterday's move for USTs, with Aussie 10yr yields bouncing off the 3.00% level. The rise in yields coupled with concerns over US-China tensions has put the markets in risk-off mode this morning. We could, however, see bonds manage a rebound this afternoon, given the slew of US data releases that risk coming out weaker than expected.

Africa: African Development Bank President Akinwumi Adesina has said that countries on the continent could have saved almost $30bn in interest payments by borrowing from the bank instead of entering the Eurobond market. Adesina added that countries have raised around $40bn of funds selling Eurobonds over the past decade, and “ if they’d actually borrowed that money from the AfDB… They would have saved themselves almost $30 billion in interest payments.” The war in Ukraine and accelerating global inflation have seen borrowings costs for countries on the continent surge. Adesina added that the bank is now working on a plan to provide such countries with “low-interest, long-term money that will allow them to be able to get more resources to cope with many of these challenges.”

Kenya: A survey by the Central Bank of Kenya showed that gross loans rose to KES3.49trn in Q2 from KES3.38trn in the first three months of the year. Meanwhile, the ratio of gross loans to total assets advanced to 55.9% at the end of June from 55.4% in Q1. According to the CBK, “the increase in gross loans was largely witnessed in the trade, manufacturing and personal household sectors.” The rise was mainly due to higher credit for working capital and loans to individual borrowers. Gross non-performing loans deteriorated to 14.7% in Q2 from 14% in the prior quarter. Going forward, the level of non-performing loans is expected to remain constant in all economic sectors during the next quarter.

Egypt: The Egyptian Suez Canal recorded a 32.4% y/y growth in revenue in July due to a jump in oil tankers by more than 60%. Specifically, revenues amounted to $704mn, the highest monthly figure, from $531mn in July. The number of ships transiting the canal rose by 25.9% y/y, registering 2,103 vessels, compared to 1,670 ships in the same period in 2021. The Suez Canal Authority forecasts export revenues to be between $7.5-8bn in 2022, which could boost Egypt’s foreign currency income, given it is one of the main sources along with remittances, tourism, and the export of goods.

Zambia: Ratings agency S&P sees Zambia as being a “step closer” to debt restructuring and a program with the International Monetary Fund (IMF) after Zambia’s creditors over the weekend agreed to provide financing assurances. S&P added that “Zambia is likely to pursue debt relief from private creditors on terms at least as favourable as those to be agreed by the official creditor committee for Zambia.”. S&P also said that final IMF approval “could unlock further financing from other development partners and provide a policy anchor for government reforms.”

Egypt: The S&P Global Egypt PMI rose to 46.4 in July, from a 2-year low of 45.2 in June. While the rise in the index was the largest seen in just over a year, the reading remained well below the 50.0 point threshold, signalling a deterioration in operating conditions. Survey results show that output and new order decreased again, albeit at slower rates compared to June. Companies again highlighted a sharp fall in demand linked to inflationary pressures, although there were signs that these had begun to soften following June’s two-year record. Business expectations for the next 12 months remained largely subdued in July. After rising to a five-month high in June, sentiment fell sharply and was one of the weakest on record. Only 13% of companies predicted growth of output over the coming year.

Oil: Oil prices are stuck around the $100 per barrel level this morning when looking at the Brent front-month contract, with investors turning their focus to today’s OPEC+ meeting. The outcome of the meeting is quite uncertain, with many expecting that output levels will remain unchanged for September, given that the pandemic-related cuts have now been wiped out. There is a chance that we may get a further increase in output promised, with the Saudis acceding to some pressure applied by the US to pump more oil. However, the chances of this are slim, given that most members are already at their limits when it comes to production.

The latest data from the Central Bank of Nigeria (CBN) shows that Nigeria's foreign currency reserves rose further in July, coming in at $39.22bn from $39.16bn in the month prior. This was the second straight month that reserves have risen, with support partly coming from the increase in foreign exchange inflows from non-oil sources through the CBN RT200 FX program and an increase in diaspora remittances. While foreign reserves rose in July, it is worth noting that they have fallen in four out of the past seven months and by 3% or $1.3bn since the start of the year. 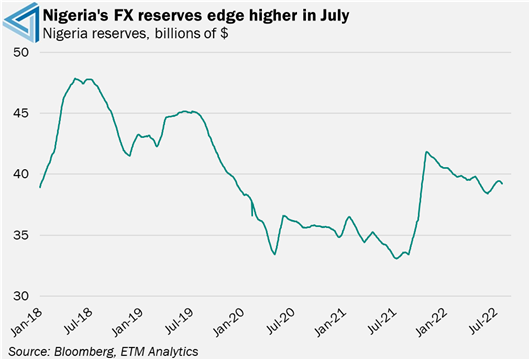 The broader decline in the level of Nigeria's foreign currency reserves comes on the back of continued CBN intervention in the foreign exchange market to support the naira and low oil production as a result of theft and vandalism. Low oil output has meant that Nigeria has not been able to capitalize on the windfall of higher global oil prices. A report last week showed that an oil pipeline hauling 180,000 barrels a day across Nigeria has ceased transporting crude since mid-June due to theft. The link's capacity is about 15% of Nigeria's most recent average daily output based on Bloomberg's calculations. While Nigeria has tried to stamp out sabotage on its pipeline network in recent years, oil theft remains a chronic problem.

Going forward, risks to Nigeria's reserves remain tilted to the downside amid dwindling oil proceeds and significant demand pressure, which has forced the CBN to support the market and ration dollar supply. Rationing dollar supply has, however, led to a sustained weakness of the naira in the parallel market, suggesting a more flexible exchange system may be required.

Tracking the broader bias in core bonds, Ghana’s local currency bond curve has flattened over the past month. Yields on the front-end of the curve have traded higher, with the 2yr and 3yr yields rising by more than 60bps over the past month, while yields from the 5yr tenor out have traded lower. Driving yields higher on the front-end of the curve has been persistently strong inflation and the aggressive tightening from the Bank of Ghana and major central banks, including the Fed, BoE and ECB. Mounting growth concerns and the positive developments on the fiscal front have helped drive yields on the belly and the long end of the curve. 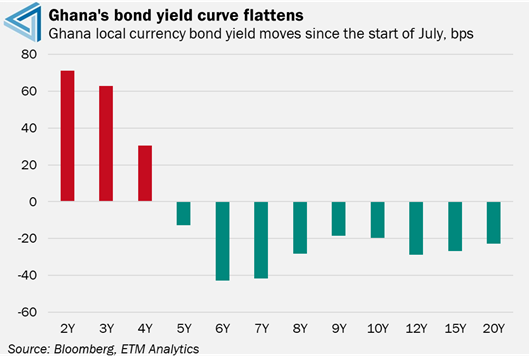 The government’s about-turn on approaching the IMF for a program has boosted domestic sentiment. In contrast to previous communication, Finance Minister Ken Ofori-Atta announced last week that Ghana is anticipating a 3-year programme with the International Monetary Fund worth about $2bn to $3bn. Finance Minister Ofori-Atta said that “programmes usually take about six months, but the interventions of finding support for balance of payments has to be immediate and those discussions are going on.”

While Ghana is still some way from securing a deal with the IMF, the shift in rhetoric is encouraging and suggests that Ghana could return to a more sustainable debt trajectory. Although the shift in rhetoric has helped ease fiscal concerns, fiscal risks remain acute. Ghanaian bonds are trading in distressed territory, with Ghanaian fiscal premium currently one of the highest in the world, notwithstanding the recent decline in bond yields.

Macroeconomic: New LNG project in Mozambique is expected to benefit the economy hugely

Gas prices have been soaring over the last few months as supply concerns have continued to increase. In particular, Europe has felt the effects of these high prices as they have been very reliant on Russia for gas. This has resulted in Europe having to look for alternative gas supplies. Following increased demand, energy giant Eni has announced a plan to build a second liquified natural gas (LNG) gas production vessel off Mozambique. 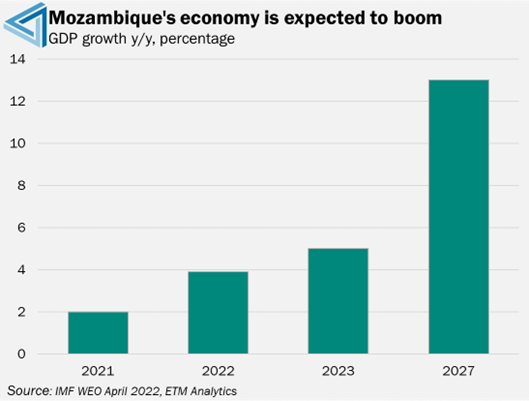 The plan is for the LNG platform to be built within the next four years in order to allow Europe to diversify their fuel supplies. The second LNG platform would help boost gas exports slowed by multiple delays over the past few months. This project will help to develop Mozambique’s resources and bring significant revenue to the country.

The current LNG project is underway but has been mired by delays due to the Covid-19 outbreak as well as a violent militia outbreak within the country. The government has however ramped up efforts to restore peace and stability within the region, but significant risks still exist. Eni and the government will need to deploy measures to prevent any disruptions to the project.

These LNG projects are expected to benefit the economy significantly over the medium to longer term. The project will create many jobs, as well as increase the amount of income that the country receives from the exports of LNG. Finally, it is going to be essential to move quickly in the development of the platform as the demand for floating LNG platforms increases and the materials needed to build them are likely going to become more expensive.