TotalEnergies announced at its annual Investor Day presentation yesterday that production from its Mozambique LNG project (the former Anadarko/Occidental project) is now expected in 2026 (a replay can be found here). This marks a two-year delay in first gas compared with the original project timetable, under which – and reiterated as recently as August 2020 – production was expected by 2024. The new production date, however, relies on the assumption (and it is only an assumption) that project activity resumes in 2022 (ie next year), although no specific month for the resumption of activity was mentioned.

The revised timetable comes after the company declared force majeure on the Mozambique LNG project in April 2021 following the deterioration in the security situation in the north of the Cabo Delgado province, where the project is based. Total said at the time that the project would be delayed by at least a year. The targeted 2022 date for a resumption in activity is therefore consistent with that –as no month was given, we might expect it to be around April 2022.

Of course, what this also means is that the one-year closure has had a knock-on effect in terms of a two-year delay in production (we're not LNG experts so don't know the technical details as to why). There was, however, no suggestion that the project will be reshaped or scaled back in response to the delay, or to reflect any expected changes in the outlook for the global LNG market. Total's Mozambique LNG project is US$20bn in size (in terms of post-FID investment).

The planned resumption of work at Total's facility follows the recent success of Mozambique's armed forces, with help from Rwanda and the SADC, at reclaiming areas in Cabo Delgado province that had been seized by militants after the insurgency earlier this year. However, it remains to be seen whether this success will prove durable.

Total's announcement should be good news for the country's LNG industry. Total's project is one of three large LNG projects in Mozambique, although their status is mixed. As far as we understand, ENI's US$5bn Floating LNG (FLNG) project has not been affected by the northern insurgency (which makes sense given its nature) and is still on track for first gas in 2022. However, Exxon Mobil's US$30bn offshore LNG project is still awaiting the final investment decision (FID), which has been repeatedly delayed even before Covid and the insurgency, and is currently on hold.

The uncertainty over the LNG timeline, especially over Total's project, post-Covid and the northern insurgency, has been one of the main concerns among bondholders in Mozambique and it came up as a topic of conversation in our recent set of client meetings in London. And it's probably the Total project that matters most because we already knew the ENI project was on track while Exxon Mobil's was already delayed. And the ENI project is much smaller, so less transformative than Total's. We think investors, who had already got used to the idea of a one-year delay at best in Total's case, should be able to tolerate a two-year delay, now that has been confirmed. However, a longer delay would be more of a concern, while failure to resume Total's project really would be a game-changer.

We think better visibility over the LNG timeline should help to support the bonds. Debt service should be manageable in any case, for the time being, comprising interest only until 2028, when amortisation then begins. Investors might be more worried if amortisation began before first gas from Total arrived. And the interest-only part is quite low, for now, amounting to only US$45mn per annum until 2023, although it then increases to US$81mn when the coupon steps up from 5% to 9% in 2024.

Bondholders might find even more comfort if the authorities sought an IMF programme, but this doesn't look to be on the agenda for now. Meanwhile, the IMF's SDR allocation (worth US$312mn for Mozambique) and DSSI relief (Mozambique benefited from cash flow relief under the final extension of DSSI from the Paris Club on 7 September) should help to boost near-term liquidity. That said, the shadow of the Common Framework may make some investors nervous, despite the authorities' efforts to allay such concerns (although, in that regard, an IMF programme could also be seen as a double-edged sword). Mozambique's public debt is still high, projected at 125% of GDP this year by the IMF in the April 2021 WEO, but seen as sustainable over the longer term on the back of the expected gas revenues.

We maintain our Buy on MOZAM 5% 2031, with a yield of 10.2% (price US$86.4) as of cob 28 September on Bloomberg (mid price basis). The bonds have broadly matched the index this year, with a total return of -1% YTD. There could now be a window for outperformance. 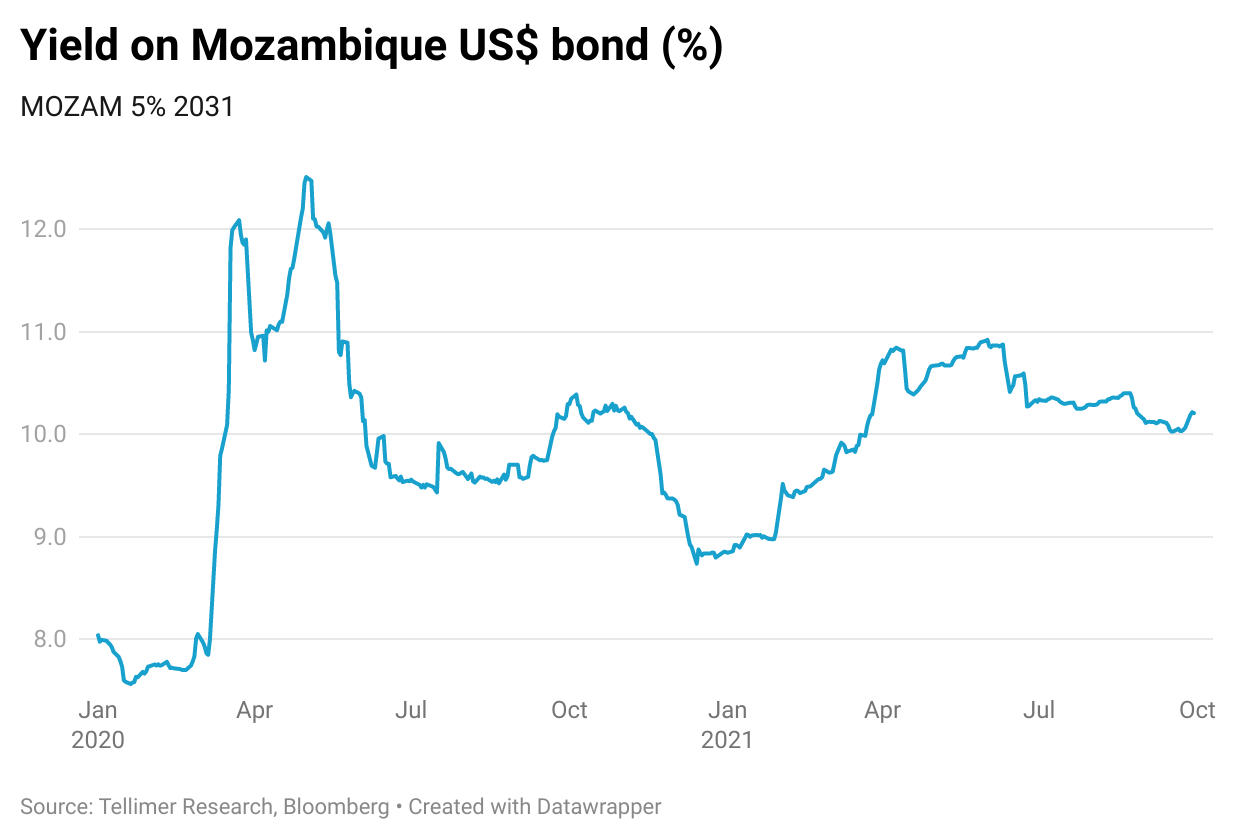