We set out our thoughts on Mozambique following our discussions with the IMF team during the recent virtual IMF/World Bank Spring Meetings. We would like to thank IMF staff for their time. The views we set out here are our own. We retain our Buy on MOZAM 31s with a yield of 10.4% on a mid-price basis as of cob 16 April on Bloomberg (mid-price of US$83.8).

Our key takeaway from the virtual IMF/World Bank Spring Meetings on Mozambique was that there is not going to be an IMF programme; there was no mention of programme discussions in the most recent IMF communication published on 5 April, which followed its virtual technical mission. This is in stark contrast to the situation through last year (recall, Mozambique requested programme talks even before Covid and this request still stood by the time of the Annual Meetings in October).

It seems that the government has changed its mind about a programme and feels it no longer needs one. The authorities may believe they can manage the financing situation well enough on their own and, therefore, there is no sense of urgency. There is no near-term financing pressure; reserves are still healthy (gross reserves of US$4bn, c6 months of imports cover, according to the central bank), the authorities could access deposits and issue in the domestic market, Mozambique has benefited from the debt service suspension initiative (DSSI; and we expect it will seek to use the final extension given its participation in the two previous rounds) and will get a boost to reserves from an SDR allocation (we calculate US$312mn, c8% of gross reserves).

The other main discussion points centred on the macroeconomic impact of the insurgency in the northern province of Cabo Delgado, and the recent escalation with deadly attacks in Palma, and its impact on gas development. It is too early to assess the impact of the tragic events in Palma, which took place just as the IMF mission was coming to a conclusion. There might therefore be a question over the extent to which even the new short-term forecasts are impacted by those events, especially on the fiscal side, given possible direct costs (military spending) and indirect costs (social spending and dealing with the massive numbers of internally displaced people). A stronger-than-expected fiscal position last year, as revenues held up, does however put the country in a better position this year. The overall fiscal deficit widened to 4.1% of GDP in 2020, compared with a previous projection of over 5%, and up from a 1.2% deficit in 2019. However, the overall deficit is projected to widen further this year, to 6.3%.

Meanwhile, the IMF now sees a modest economic recovery this year, with real GDP growth of 1.6%, marking a slight downward revision from 2.1% in the April WEO, due to a disappointing final quarter of 2020 and Covid restrictions. Real GDP fell by 1.3% in 2020, compared with the previous expectation of -0.5%. Downside risks include Covid, the security situation and vulnerability to natural disasters. A recovery in mining, especially coal, provides an upside risk.

There had been setbacks on gas development. Total has shut operations at the site of its Mozambique LNG project 10km from Palma after recent events while Exxon postponed its Final Investment Decision (FID) on the Rovuma LNG project again in March 2021, albeit in part for different reasons. It is not clear what this means for gas production, which underpins debt sustainability. First gas, from Total’s project, is still expected in 2024. Will this need to be revised?

This will inevitably raise questions over debt sustainability. Mozambique’s debt situation remains classified as being in distress by the IMF (the IMF hasn’t updated the DSA since the RCF request in April 2020), although debt is assessed to be sustainable on a forward-looking basis (gas-dependent). Public debt is high, estimated at 122% of GDP in 2020 (IMF April WEO), a rise of 19pts from 2019 (due in part to last year’s currency devaluation, which has, strangely, unwound in the past four weeks). The IMF WEO projects debt to fall below 100% in 2025. But the debt service burden is manageable, with most public external debt being concessional.

We think bondholders will no doubt be disappointed by the withdrawal of Mozambique’s long-standing interest in an IMF programme. And it was never all about the money either. Notwithstanding the authorities’ solid macro policies in recent years and through Covid, a programme would have provided an IMF stamp of approval, giving confidence to investors, and reinforcing policy discipline and reform implementation, especially on governance, which is important given Mozambique’s low credit rating (Caa2/CCC+/CCC), baggage from the hidden debt scandal and ESG considerations. It would have also helped to catalyse donor funding.

But there might be a glass half full angle to this, to the extent that not only does the absence of an IMF programme mean the government is comfortable with its own financing situation (and, hence, capacity to service the debt), but it may also help to assuage any lingering concerns about the risk of Mozambique seeking a debt treatment under the Common Framework, which could have also been factored into bond prices. With a single large bond and fighting a conflict (which has costs), bondholders may have been concerned about parallels with Ethiopia, which has requested a Common Framework treatment, and that Mozambique could follow in Ethiopia’s footsteps (although we think the creditor composition is different and Mozambique’s reserves position looks stronger). But, as far as we know, Mozambique hasn’t expressed interest in the Common Framework and it would need a Fund programme to do so; that it isn’t now seeking a programme, after all, may therefore signal this is not being considered. That said, without the gas, Mozambique will have more of a challenge in the future. The eurobond begins to amortise in 2028 and, even before then, the coupon steps up in 2024 (from 5% to 9%) when interest payments will rise to US$81mn a year from US$45mn presently. The next coupon is due in September. And presumably, if circumstances change, the authorities may be more willing to dust off the programme request.

We retain our Buy on MOZAM 31s with a yield 10.4% on a mid-price basis as of cob 16 April on Bloomberg (mid-price of US$83.8). After the year-end market rally, the bonds fell c10pts this year in the wider EM selloff and, more latterly, due to the insurgency, but have stabilised since the Spring Meetings. 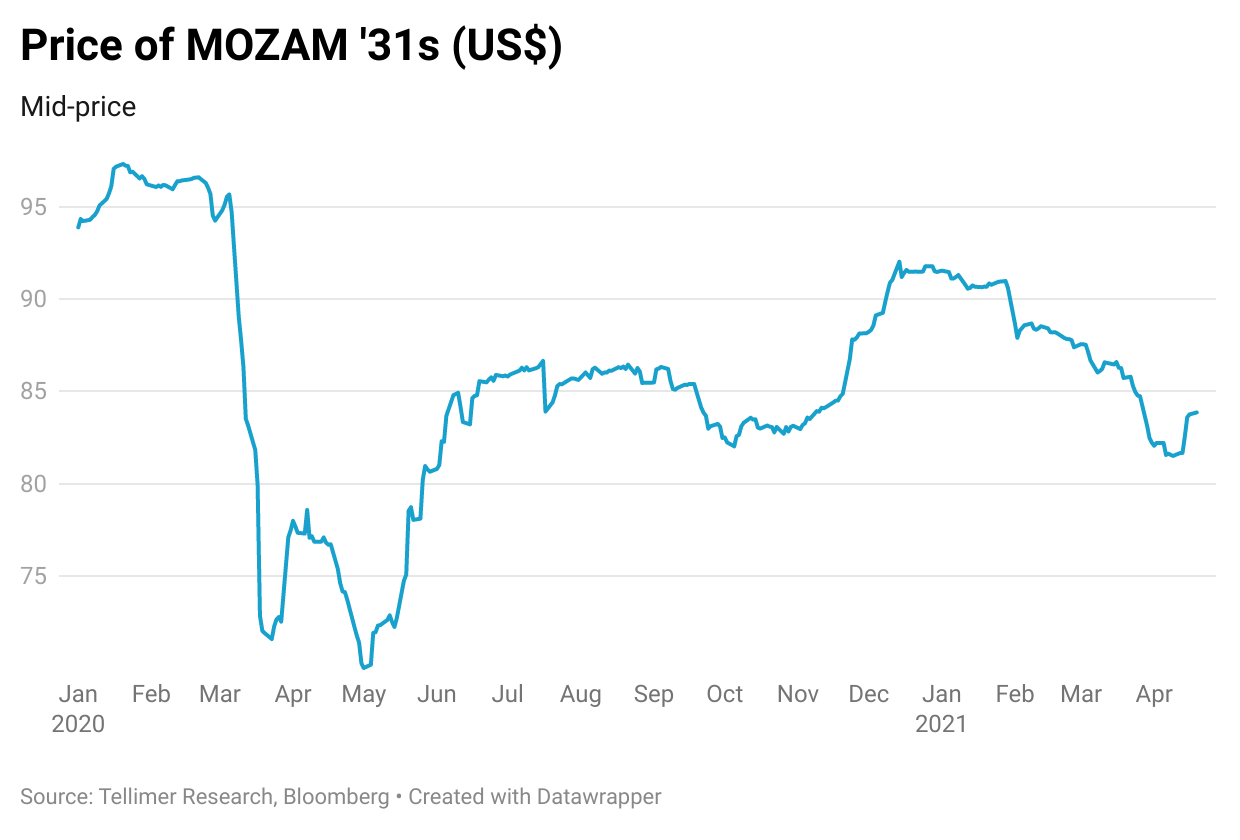