We set out our thoughts on Mozambique following our virtual discussions with the IMF team during the recent IMF/World Bank Spring Meetings. We would like to thank IMF staff for their time. The views we set out here are our own. We retain our Buy on MOZAM 31s with a yield of 10.4% on a mid-price basis as of cob 25 April on Bloomberg (mid-price of US$87.9).

There were no real surprises from our discussions on Mozambique; after all, the IMF only recently announced staff-level agreement (SLA) on a new programme, a three-year extended credit facility (ECF) for an amount of US$470mn (150% of quota), on 28 March. We anticipate Board discussion in early May, pending the authorities’ publication of its Covid audit (a requirement of the emergency funding Mozambique received under the rapid credit facility – RCF – during the pandemic).

But the discussions did serve to underline our positive view on the authorities’ strong ownership of the intended programme and its reform commitment. Indeed, we wonder if the authorities are not getting the credit they deserve after several years of prudent macro management following the hidden debt crisis. Key risks remain related to LNG development and the fragile security situation in the north, while social pressures could emerge from higher food and fuel prices. 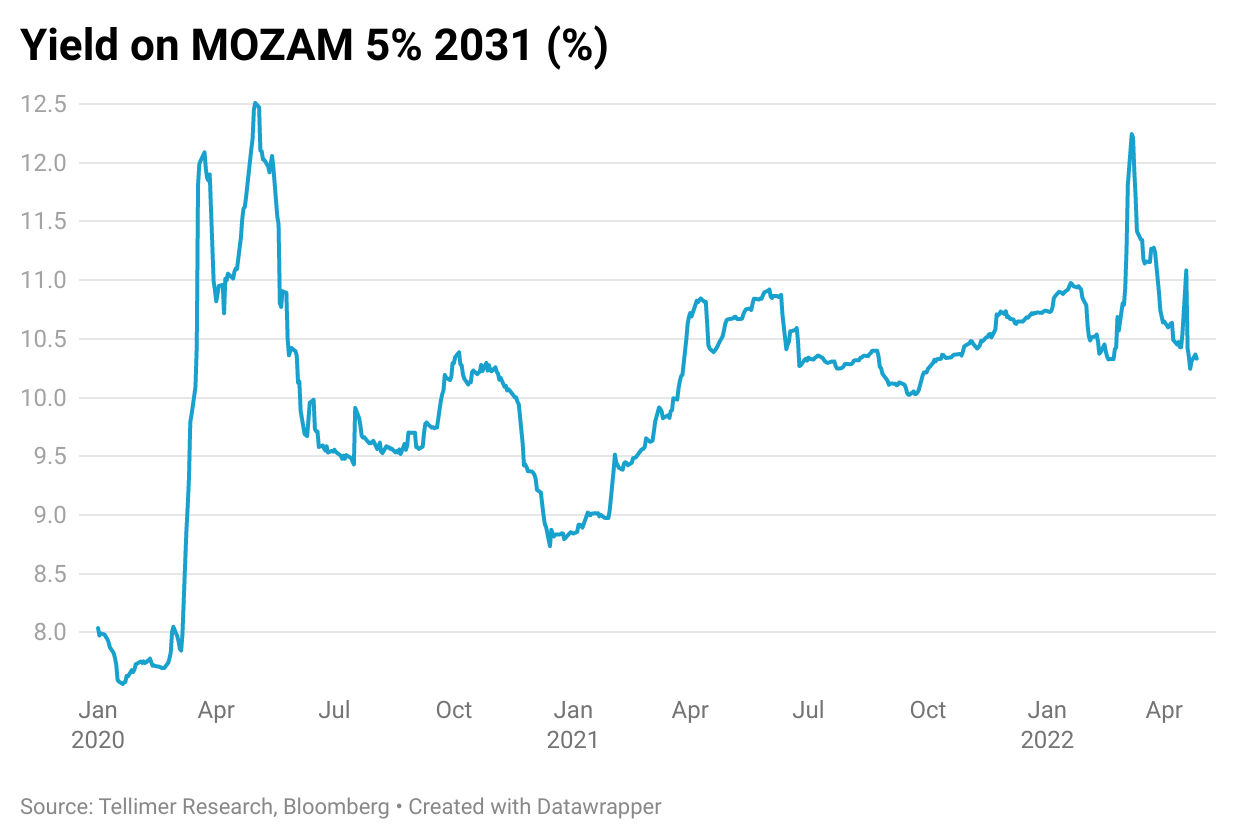 The IMF sees a steady economic recovery, after the pandemic, which is picking up pace and broadening. Real GDP growth was 2.2% last year, based on official GDP data, a little bit weaker than expected in the October WEO, so no real surprise. Q1 looks to be in line with broader expectations that the economy is gradually picking up and broadening, into services, compared with last year, when the recovery was led by agriculture.

However, the war in Ukraine presents a new shock. The main channels of impact were indirect through higher food and fuel prices, leading to higher inflation, and a worsening in the balance of payments outlook, which was reflected in the programme. Uncertainty remained over what happens to its trading partners and terms of trade, and the impact of higher food and fuel prices on demand.

Still, the war doesn’t seem to change the panorama too much. The new April WEO projects GDP growth picking up to 3.8% this year and rising to 5% in 2023. Over the longer term, non-LNG growth is seen at c4% (which is conservative).

Inflation is expected to pick up this year, with the IMF projecting 9.0% by year-end in the WEO, compared with the latest reading of 6.7% yoy in March, but the central bank got ahead of the curve with another large pre-emptive increase a few weeks ago, when it raised rates by 200bps to 15.25% on 30 March. That was its first change since January 2021, when it raised rates by 300bps. The result is a hefty cumulative rise of 500bps, and very positive real interest rates.

LNG is expected to come on stream this year. First gas is expected in H2 22 from ENI’s FLNG project, and steps up again in 2026 from TotalEnergies’ project (delayed from 2024), based on company statements.

Meanwhile, the exchange rate has been suspiciously stable. Official reserves have declined some 17% since August (after the SDR allocation) to stand at a 12-month low of US$3.4bn in February (IFS data). However, this has not been due to direct FX intervention but rather reflects last year’s change in reserve requirements and the timing of LNG-related imports that came through late last year. Higher food and fuel prices will also put reserves under pressure.

But the biggest challenge is on the fiscal and financing side. Pressures became particularly acute towards the end of last year, pushing the authorities towards the programme. The programme balances a moderate amount of fiscal adjustment, which, combined with economic recovery and the onset of gas production, is expected to put debt on a declining path over the medium term.

The programme sees the primary deficit reaching balance in 2024. This compares with a primary deficit (after grants) of 1.8% of GDP last year, and an overall deficit of 4.4%, based on IMF methodology.

The two main sources of fiscal savings underlying the fiscal adjustment are VAT reform and public sector wage bill reform, as other planned fiscal reforms won’t bring significant yields. We understand these are expected to yield combined fiscal savings building to c2% a year over three years. VAT reform is about eliminating distortions and removing exemptions. Legislation will need to be passed this year for implementation next year. Wage bill reform is about efficiency, through changing public sector compensation and eliminating supplements and different wage scales, and the compensation calculation for the future, rather than pay cuts or job losses, which will deliver benefits over the medium term in terms of constraining the wage bill (public sector wages as a share of GDP). The wage bill reform legislation is already in place. Now is the implementation phase, starting in H2 22, with next year the first full year under the new scheme.

Moreover, Mozambique's recent era of debt distress may now be more firmly behind it (debt was classified as being "in distress" at the time of the RCF in April 2020). Given the Fund is moving forward with a programme, that implies staff assess debt to be sustainable, presumably supported by gas development and the planned fiscal adjustment. Reaching primary balance pretty soon under the programme in the context of an economy growing at 10% in nominal terms (nominal GDP growth averages c16% over the medium term in the WEO) helps the debt dynamics.

In addition, the starting point is better. Debt/GDP has been revised down after a technical review and debt reconciliation. Public debt is now c100% of GDP (104% in 2021 on IMF figures), considerably lower than the 134% projected at the time of the October WEO. The October WEO projected public debt to fall towards 100% by 2026. It may now get there a lot sooner if we roll the downward revision forward. However, we await Board approval and publication of the staff report, and the accompanying DSA, for the Fund's updated assessment of the debt situation and debt trajectory.

Still, debt vulnerabilities remain and we think this is likely to be reflected in the programme by restrictions on commercial (market) borrowing, possibly even under a zero non-concessional borrowing limit.

However, the programme is expected to provide a catalytic role for donor financing. Donor lending has been hesitant since the hidden debt crisis, amid concerns over governance, and the decline in concessional financing added to financing pressures seen late last year. But it seems there is a lot of pent-up interest from development partners, and it is hoped the IMF programme’s seal of approval will see renewed lending activity, led by the World Bank, which has been closely engaged in the process.

The programme also reflects the authorities’ own structural reform agenda and ideas, with a focus on improving governance and transparency, PFM and tax administration. This should create a better business environment.

We retain our Buy on Mozambique (Caa2/CCC+/CCC), with a yield of 10.4% on the MOZAM 5% 2031 on a mid-price basis as of cob 25 April on Bloomberg (mid-price of US$87.9). Our positive view is based on the expected onset of LNG production and strong ability to pay, given low debt service on the bonds (and little supply risk in the near term), together with the government's prudent approach to macro-management. The lower debt burden is also a positive. The IMF programme, which improves the outlook for donor funding, is the icing on the cake.

Nonetheless, there are risks, primarily the fragile security situation (mainly in the north), possible social pressures, the timing of LNG production, governance and capacity, and climate vulnerabilities.

The bonds have outperformed the index this year, with a total return of 5.3% YTD compared with-12.5% on the Bloomberg EM Aggregate Index. The initial price fall in the wake of Russia's invasion of Ukraine (-10pts) has since been reversed, and some, and the bonds have shrugged off concerns over global monetary tightening to reach 2022 highs, and their highest for over 12 months. 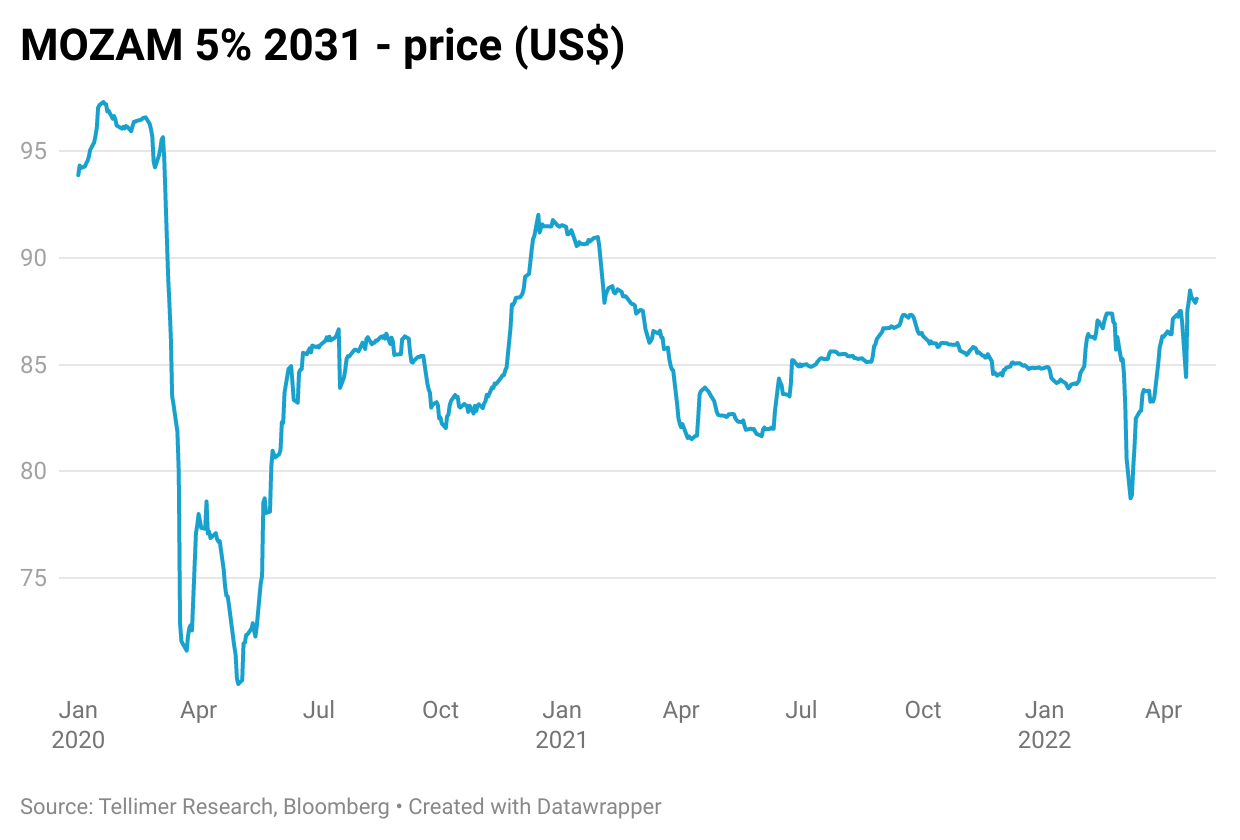