We set out our thoughts on Mozambique following our discussions with the IMF team during the recent IMF/World Bank Annual Meetings. We would like to thank IMF staff for their time. The views we set out here are our own. We maintain our Buy on the MOZAM 5% 2031 bond with a yield of 16.0% (price US$67.8) on a mid-price basis as of cob 25 October on Bloomberg.

The IMF announced staff-level agreement on the first review of the extended credit facility (ECF) in September, and arguably little has changed since then, although, usefully, the thrust of the latest projections is captured in the new WEO.

As noted in the IMF statement at the time, board approval is expected in December, although it could even be sooner than that, all being well. There is one prior action, related to passage of legislation on VAT reform, which was expected imminently. We just hope the staff report will be published this time so we can finally see all the programme details and numbers (the staff report following programme approval in May has still not been published, nor is it likely to be now – we think this is a bit of an own goal by the authorities, who finally had something good to shout about in an otherwise challenging external environment). 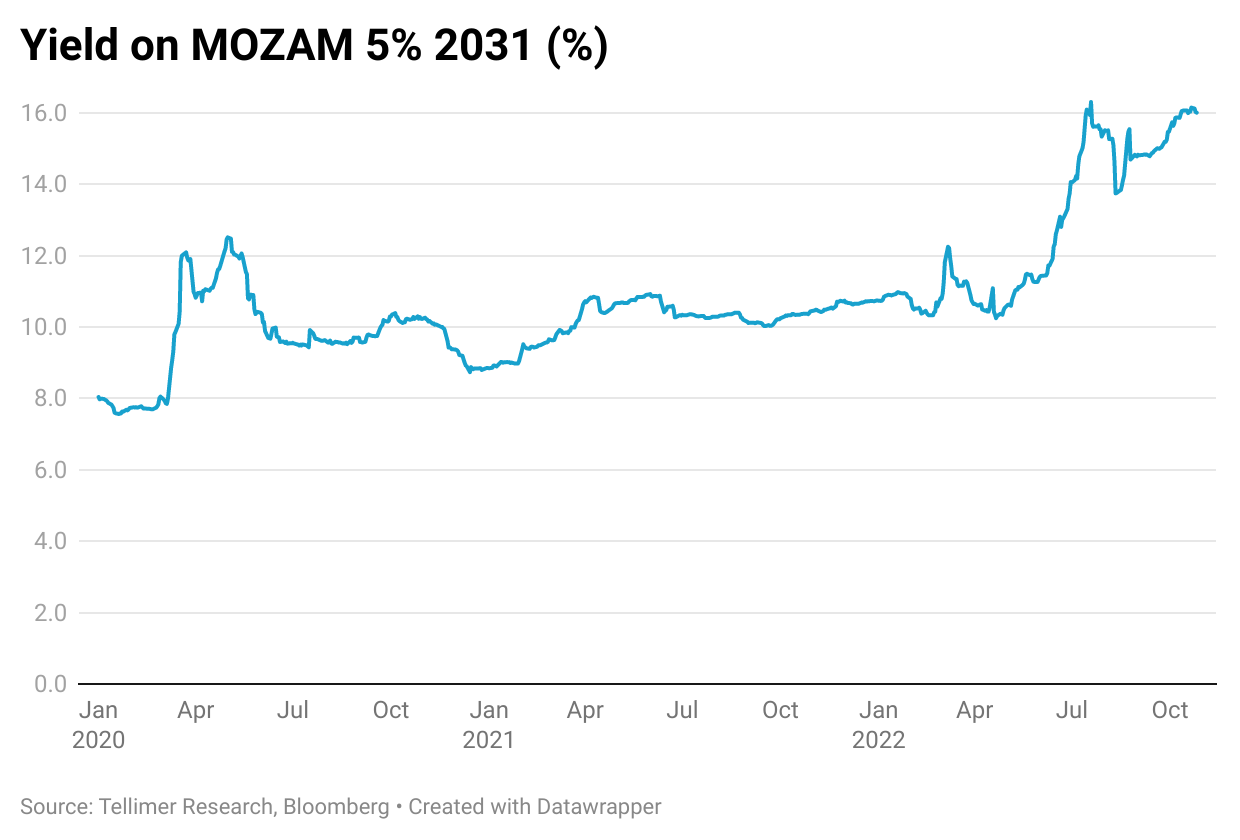 It has been a good start to the programme, with all quantitative targets met and structural benchmarks completed. There are no real major changes to the outlook, with a broadening and deepening economic recovery, due to the lifting of Covid restrictions and the services sector's recovery. Real GDP growth is projected at 3.7% this year in the WEO, up from 2.3% in 2021, little changed from programme approval. There is no direct exposure to Russia/Ukraine, so the impact has been felt through prices – higher inflation. CPI inflation rose to a high of 12.1% yoy in August (easing 10bps to 12.0% in September), up from 6.7% at end-2021. The central bank has, however, been very proactive, increasing its policy rate by a total of 700bps since the end of 2020, to 17.25% (including two 200bps hikes this year, the most recent following its MPC meeting in September), resulting in highly positive real interest rates (signalling one of the strongest monetary policy responses in the region).

On the fiscal side, it is so far, so good. There have been some pressures, as elsewhere, as the authorities have sought to mitigate the pass-through of higher fuel prices, implying higher subsidies, although currently this does not present a problem. Revenue has been doing well (projected to rise 20% this year in the WEO, a rise of c2ppts of GDP to 29.7%), while spending has been contained. Under the programme, the primary balance (after grants) sees a gradual improvement from -2.1% of GDP in 2021, reaching balance in 2024 (and rising steadily thereafter) while the overall fiscal balance (after grants) goes from -4.8% of GDP in 2021, reaching balance in 2027.

The key challenges going forward, and the focus of fiscal reforms, is on VAT and the public sector wage bill. VAT reform is about broadening the base, eliminating exemptions and zero-rated items, to enable the high VAT rate to be cut (from 17% to 16%). The net yield is estimated at 0.7% of GDP in the first full year and it will strengthen non-hydrocarbon related taxes. Reform of the complicated wage bill structure, which involves an upfront cost, is about efficiency and simplification. The wage bill is high (13.8% of GDP in 2021), which is high for the region (c8-9%), and the aim is to get this down.

The programme envisages a gradual improvement in the primary balance, incorporating some of the impact of the fiscal reform (VAT and wage bill). But, even then, the overall deficit isn’t declining very quickly. Could they go faster, to get the debt down more quickly? Not really, given where Mozambique is coming from (it is, after all, still classified as a fragile state by the World Bank), and risks have increased since the programme was approved.

Public debt is still high but is expected to fall over the medium term; seen as sustainable on a forward-looking basis. After rising to 120% of GDP in 2020, due to the pandemic, public debt fell to 106% in 2021, and is expected to ease further to 102% this year. It will remain at that level in 2023. However, it is projected to fall thereafter to 84% in 2026, and to 71% in 2027, helped by the onset of LNG production and high nominal GDP growth (with growth in dollar GDP averaging c10% over the medium term). 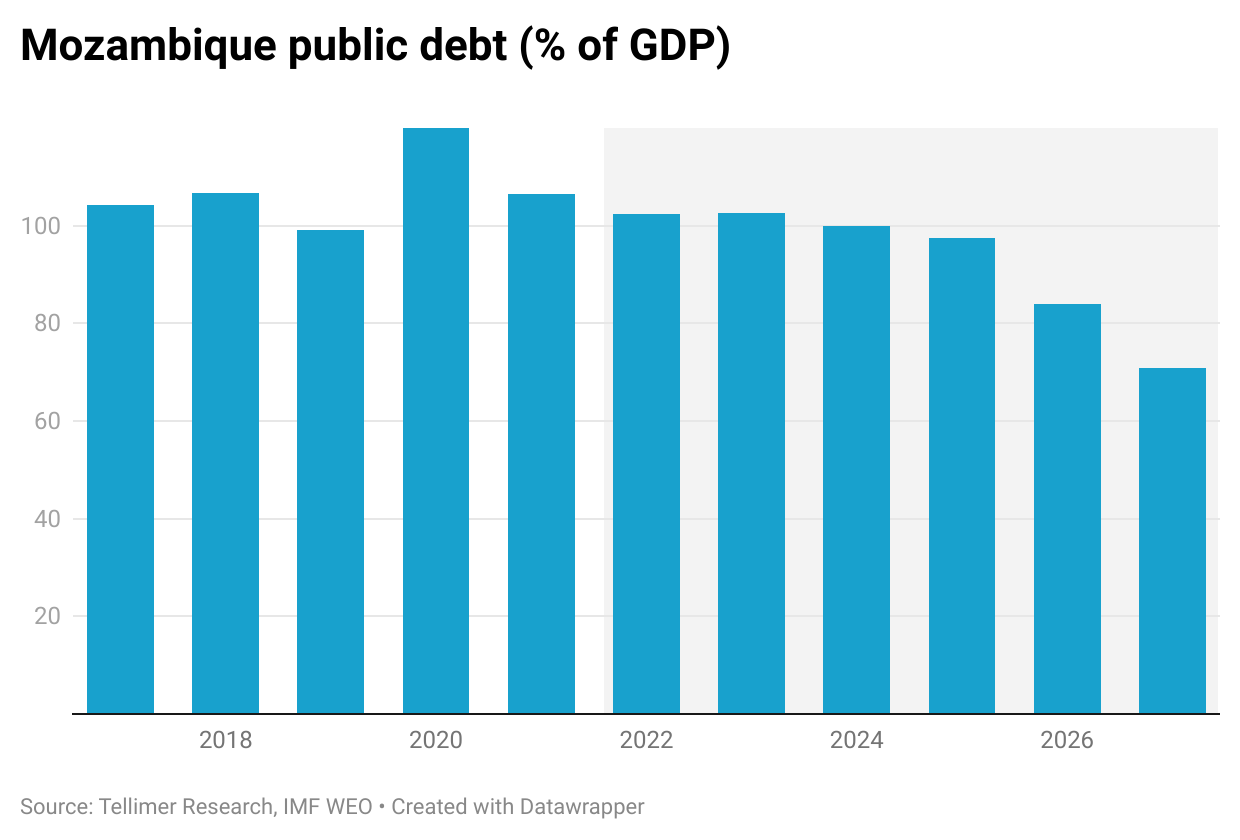 Fiscal financing remains a concern, however; although, in our minds, the relative newness of the programme (and a programme needs to be fully financed) means that financing should be secure in the near term (subject to any broader macro deterioration). The authorities have had to rely on the domestic market, although the programme is expected to catalyse other official sector financing. Gross external financing requirements (GEFR) are, though, less of a worry, with the current account largely driven by megaprojects that are financed by FDI, and any residual financing needs covered mainly by donors. The drain on reserves caused by the central bank’s promise to provide dollars for fuel importers is, however, problematic. Official reserves (IFS definition) have fallen 18% this year to stand at US$2.9bn in August.

There is little new on LNG with the first exports from ENI’s FLNG offshore platform expected in a matter of weeks, as anticipated, while TotalEnergies evaluates the security situation with a view to determining when it might resume activity at its project. We understand Exxon continues to do technical work as it awaits FID.

Despite showing a bit of resilience in the first part of the year, the bonds have since suffered, in tandem with everything else, due to the impact of the war in Ukraine and tightening in global financial conditions, with the price down 20% ytd, although they have managed to outperform the index (a total return of -16% versus -25% for the Bloomberg EM Sovereign USD index). The bonds are actually up c2pts since our Top Picks for H2 on 20 July.

Our positive view on Mozambique (Caa2/CCC+/CCC+) is based on the onset of LNG production and strong ability to pay (debt service on the bond is very low), together with the government's prudent approach to macro-management. The IMF programme, which improves the outlook for donor funding, is the icing on the cake.

Nonetheless, as we've noted before, there are risks, primarily the fragile security situation, possible social pressures (including arising from higher food and fuel prices), risks from higher inflation and currency devaluation (with concomitant risks to the debt burden given some four-fifths is external), the timing of LNG production, governance and capacity, and climate vulnerabilities. 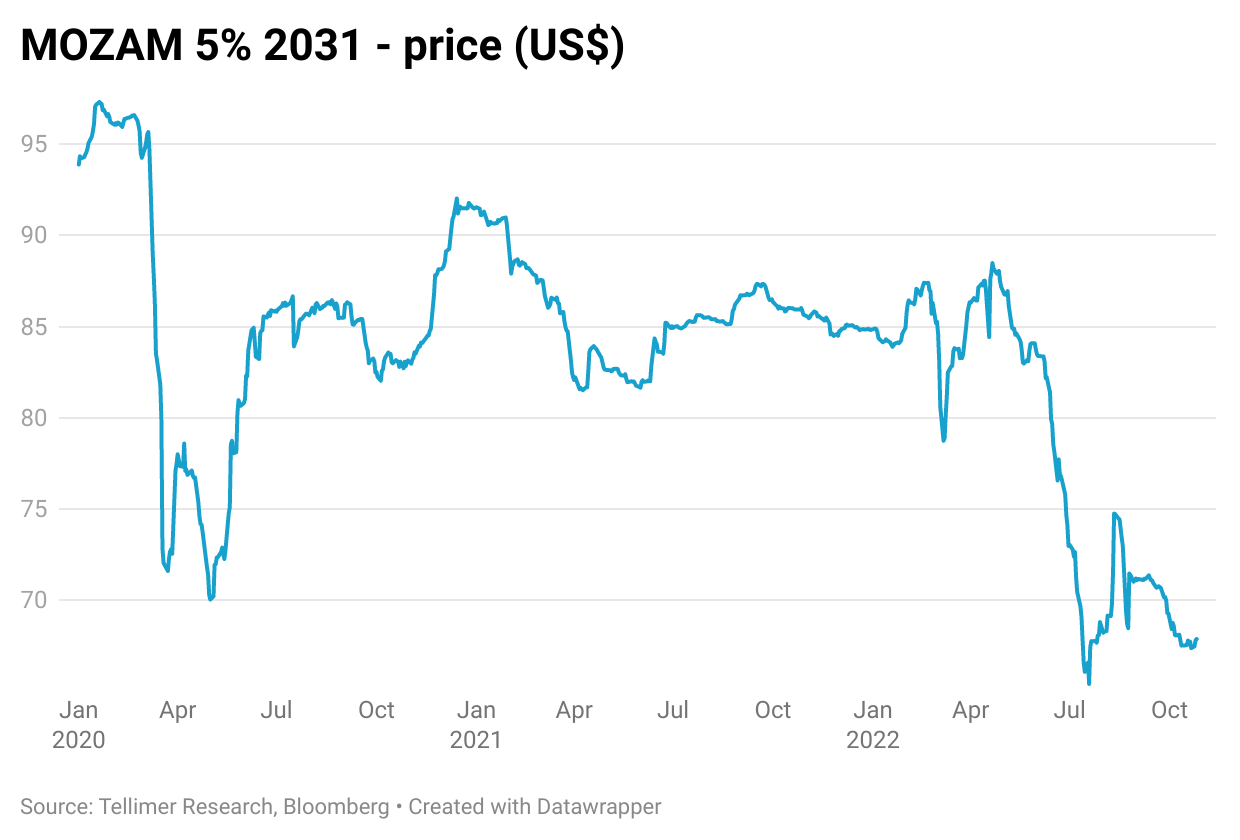