Mozambique is running one of the highest real rates in Africa

US bond yields are edging lower this morning after advancing yesterday by the most in a week, driven higher by hawkish Fed comments and rising oil prices. The comments from the likes of St. Loius Fed President Bullard this week have seen traders increase their bets on another possible 75bp hike in December, with the odds currently at 30%, while a 50bp has a 70% probability priced in. Limiting the move higher for yields, however, was some inflation data out of Europe yesterday that showed a more positive picture of the price pressures facing the region. Bund yields, as a result, were lower across the board yesterday. We also continue to see growth concerns for China mount, with today’s weak PMI figures affirming this and dragging global bond yields lower in early trade this morning.

South Africa: SARB's Financial Stability report published yesterday expressed concerns about the threat an inadequate and unreliable power supply poses to financial stability as the country experiences record blackouts. The effects of sustained load-shedding has adverse impacts on domestic economic growth, investor sentiment and business activity, exacerbating other pre-existing vulnerabilities. The impact of the severe power cuts may not be fully priced into the market, even as local investors appear more pessimistic about SA. The report also noted debt concerns. Despite better-than-expected outcomes from last month's budget update, the financial sector's high exposure to government bonds remains a risk. Despite this, the country's financial system remains resilient, and financial institutions have maintained adequate capital buffers to absorb the impact of shocks, a resilience that's expected to be sustained over the forecast period, SARB noted.

Namibia: The Namibian government aims to accelerate its industrialization agenda and diversify its export market, targeting the African Continental Free Trade Area (AfCFTA). This comes after the conclusion of a memorandum of understanding targeting export trade linked by the Namibia Trade Forum and Development Bank of Namibia. Deputy Director for International Trade and Commerce in the Ministry of Industrialisation, Trade and SME Development Ndiitah Nghipondoka-Robiati said that the MOU strengthens small and medium enterprises, adding that SMEs are a key source of economic growth dynamism and flexibility. With Namibia and the African continent working towards greater integration, the MOU could help SMEs boost their competitiveness in both local and export markets.

Nigeria: As part of the effort to enhance trade and investment relations, the Nigerian federal ministry of industry, trade and investment signed a memorandum of understanding with the United Kingdom under the UK-Nigeria Economic Development Forum (EDF). With the EDF memorandum, both countries agreed that the enhanced trade and investment partnership would offer an alternative high-profile mechanism to progress bilateral economic issues of mutual strategic importance, under which both sides will continue to work together to resolve market access issues and enhance economic cooperation. Deepening bilateral ties between the countries will be crucial in mitigating current and potential future supply-chain challenges.

Ethiopia: Internet blackouts in Ethiopia’s embattled Tigray region are expected to continue, with no timeline for restoration announced yet. Ethiopia’s Minister for Innovation and Technology, Belete Molla, said that the restoration of Tigray’s internet service would be carried alongside the resumption of its phone and electricity. The region has been without internet, telecommunication and banking services since the war broke out in November 2020. The delay in restoring these crucial services will likely continue to hamper the delivery of aid to the Tigray region.

Zimbabwe: Electricity shortages plaguing Zimbabwe are set to worsen after an authority that manages the country's biggest dam ordered the suspension of electricity generation at its main hydro plant because of a water shortage. The Kariba South hydropower provides Zimbabwe with about 70% of its electricity and has been producing significantly less than its capacity of 1 050 megawatts in recent years as successive droughts have resulted in poor inflows into the Kariba Dam whilst ageing coal-fired power stations have repeatedly broken down. The government has licensed some independent solar producers to try to augment supply.

South Africa: South Africa's trade figures, scheduled for release today, will provide key insights into the country's trade fundamentals. Investors will continue to assess the impact of the Transnet strikes on SA’s export capabilities. A key point to note is the noticeable narrowing of the trade surplus from its peak as commodity prices moderate and weakening external conditions weigh on trade dynamics. This could underscore the reasons behind the SARB's downwardly projected current account balance figure, which is expected to turn negative this year and remove a key pillar of support that the Rand has enjoyed in recent years.

The focus in the currency market remains squared on the USD as bets build that the bull run in the greenback has run its course. Speculators raised their net short USD positioning in the latest week to its most extensive level since July 2021, according to the CFTC report for the week ending 22 November. Investors have flipped their net long USD positions in anticipation that the Federal Reserve’s aggressive interest rate hikes have now been concluded after interest rates were raised by 75bps multiple times, suggesting that the US dollar has now peaked. 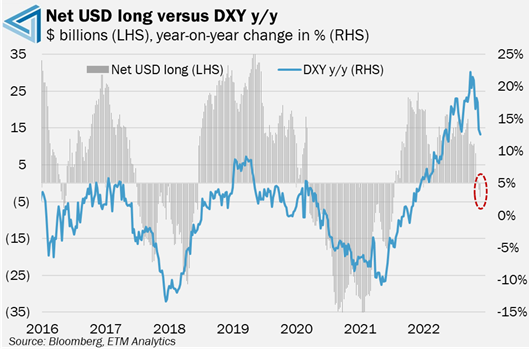 The US dollar has weakened more than 4% this month and is on track for its largest monthly fall since September 2010. The end of the USD rally has encouraged traders to rapidly turn from betting on the dollar rising to bet that it falls. Since the Fed suggested that the pace of rate hikes could slow, traders are betting that the dollar falls versus G10 and emerging market currencies. Meanwhile, bullish bets on the EUR are now almost as great as the bets wagered on the USD rising at any stage of the rally influenced by big changes in Fed policy.

The Federal Reserve has telegraphed to the markets that it will continue to raise rates. If Powell re-iterates the Fed’s commitment to bringing inflation down through further rate rises and mentions that one or two inflation reports are not enough to suggest the Fed’s job is done, then this could trigger a rebuild of some net dollar longs and a USD recovery. Markets are, however, betting that it would moderate the size of its rate hike in December to 50bps and begin cutting in 2023, which should keep weighing on the dollar.

Fixed Income: Bank of Mozambique and Bank of Namibia are set to announce their rate verdicts today

The focus for African fixed-income traders remains centred on monetary policy this week as the wave of interest rate decisions continues. The Bank of Mozambique and the Bank of Namibia are scheduled to announce their respective interest rate verdicts today. Expectations are that the Bank of Mozambique will leave its benchmark MIMO Rate on hold at 17.25% amid signs that inflation has peaked and that inflation is expected to trend lower in the months ahead. 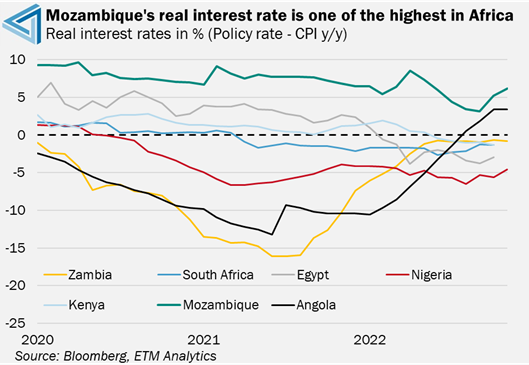 While the Bank of Mozambique is expected to stand pat today, it is worth noting that it has been one of the most hawkish central banks during the pandemic era, hiking its benchmark policy rate by 700bps since the start of 2021. While unlikely, given the resilience of the MZN, aggressive rate hikes over the past 20 months and signs of a slowdown in inflation, the outside risk of a rate hike can't be completely ruled out.

The Bank of Namibia meanwhile is expected to follow in the footsteps of the South African Reserve Bank and deliver a sizeable rate hike today. While inflation decelerated in September and October, headline inflation remains buoyed at levels that will make policymakers uncomfortable. With inflation risks skewed to the upside and the need to safeguard the one-to-one link between the Namibian dollar and the South African rand, the Bank of Namibia is expected to deliver another 75bps hike today, which will take the Repo Rate to 7.00%.

2022 has been a volatile year for financial markets, to say the least, as traders contend with soaring interest rates, Russia’s invasion of Ukraine and China’s Covid-Zero policies. While markets remain volatile, we have seen a notable decline in volatility in November as traders start to price in the end of the global hiking cycle. For context, the VIX Index, which is often referred to as the global “fear gauge” has fallen from a peak of more than 33% at the start of the month to sit just below 22% at the time of writing. 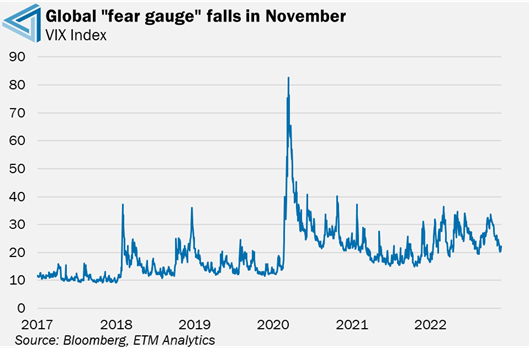 While the VIX Index is currently near the lows seen in August, it must be noted that the gauge remains elevated compared to pre-pandemic levels. For context, the VIX Index averaged just over 14% in the three years leading up to 2020, when the Covid-19 pandemic erupted. While uncertainty surrounding the path of interest rates in core markets has eased, a significant degree of geopolitical and macroeconomic uncertainty is still being priced into the market.

Looking ahead, while the global and geopolitical landscape remains cloudy, we are confident that a pivot in global monetary policy will take place in the next few months. Therefore, with the exception of another black swan event like the Covid-19 pandemic or a global war, volatility is expected to have peaked. That said, we expect volatility to remain about the levels seen prior to the pandemic.