The IMF announced on 19 September that it had reached staff-level agreement on the first review of Mozambique's new programme. Board approval is expected in December 2022, and will lead to the disbursement of US$64mn.

It comes after the IMF board approved the new programme, a US$456mn (150% of quota) three-year extended credit facility (ECF), on 9 May. Unfortunately, more than four months on, the staff report accompanying programme approval has still not been published, so details remain light. Let's hope the authorities consent to publication of the staff report for the first review when it has been completed.

Performance so far seems satisfactory. In its short statement, the IMF noted that all quantitative and structural benchmarks for the first review have been met and good progress was made on the broader structural agenda. The authorities aimed to continue implementing their ambitious economic reform agenda, including a sovereign wealth fund law, reform of public sector remuneration and the amendment of the public probity law.

But the IMF noted the macroeconomic environment remains challenging due to the increase in international food and fuel prices. The authorities have responded proactively to contain the risks from inflation, which rose to 12.1% yoy in August (nearly double what it was when the programme was approved), with the central bank raising the policy rate to 15.25% in March, while the government has acted to mitigate the impact on the cost of living, including for the most vulnerable households. The next central bank rate decision is due on 30 September.

Still, the economic recovery continues, with better-than-expected growth in the first half of 2022 (real GDP growth reached 4.6% yoy in Q2, its highest for four years), following a successful public vaccination campaign and a robust recovery of services, industry and agriculture. The IMF forecasts real GDP growth of 3.8% this year. Global commodity price increases have supported a noticeable rebound in exports.

The second review mission is expected to take place in March 2023.

However, while the IMF programme being on track will be positive news for bondholders (especially to the extent that it secures external funding needs and reinforces ability to pay), we think investor sentiment will perhaps be driven more in the near term by developments on LNG and the security situation. There, the news is mixed on both fronts. On the former, the finance minister said last week that he was very optimistic that TotalEnergies will make a decision to resume work on its US$20bn LNG facility by March, according to a Bloomberg report. It follows the company's comments a year ago that it expected a two-year delay to production (ie to 2026 from 2024), based on the assumption that activity would resume this year. ENI's first shipment from its FLNG project is, however, expected in October, although FID on ExxonMobil's project still seems some way away. On the latter, however, sadly there are recent reports that the northern insurgency is spreading and has moved south.

We maintain our Buy on Mozambique (Caa2/CCC+/CCC+), with a yield of 15.0% on the MOZAM 5% 2031 on a mid-price basis as of cob 19 September on Bloomberg (mid-price of US$70.7). Our positive view, which we recently re-affirmed at a price of US$66.6 on 20 July in our top picks for the second half of 2022 (see also Mozambique: Bond sell-off belies fundamentals), is based on the onset of LNG production and strong ability to pay, together with the government's prudent approach to macro-management. The IMF programme, which improves the outlook for donor funding, is the icing on the cake.

Nonetheless, there are risks, primarily the fragile security situation, possible social pressures (including arising from higher food and fuel prices), risks from higher inflation and currency devaluation (with concomitant risks to the debt burden given some four-fifths is external), the timing of LNG production, governance and capacity, and climate vulnerabilities. 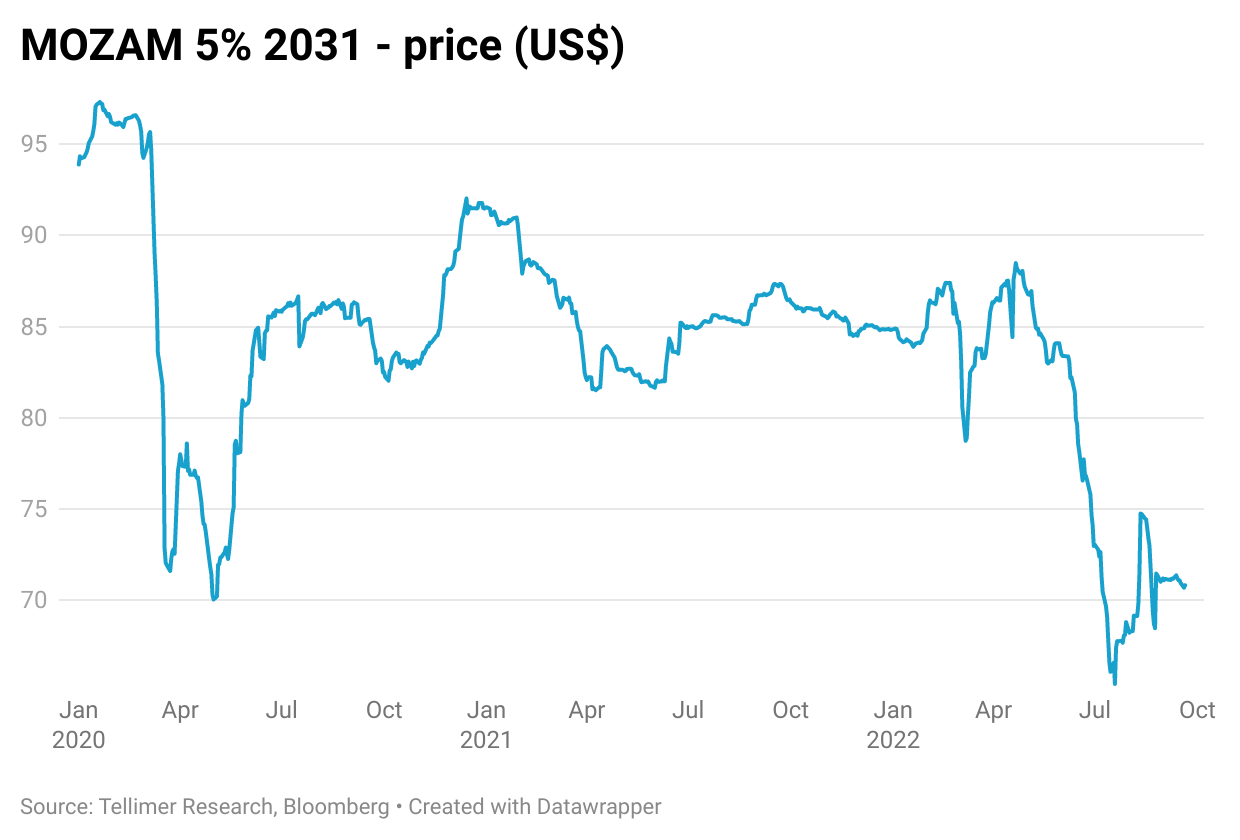