Oil prices have retreated this morning, with Brent falling back below the $110 per barrel mark and WTI nearing $100 per barrel as the US has suggested that it may release more crude from its strategic reserves. The scale of this release will be significant if early rumours are anything to go by. It has been suggested that we could see up to 1mn barrels per day released over the next several months, with the total amounting to 180mn barrels. The US is also pushing for a coordinated release of supplies from other major economies, according to the IEA, although a final decision has reportedly not been made just yet. An announcement from the US, however, could come as early as today.

Angola: The Bank of Angola is set to deliver its latest verdict on the policy rate today. The Monetary Policy is likely to keep its policy rate unchanged as a world-beating rally against the USD this year, and fuel subsidies help contain inflation pressures. An unchanged rate decision will also allow policymakers to assess the impact of global price shocks on items such as agricultural commodities, which are expected to have a major impact on inflation.

Democratic Republic of Congo: State-owned miner Gecamines is suspending its court case against China Molybdenum Co.’s Tenke Fungurume Mining SA while the government attempts to settle a dispute with the company. Communication Minister Patrick Muyaya said that the government has “proposed a road map to exit the crisis, along with a timeline, for the two sides to come to an agreement. In the meantime, the judicial procedure remains suspended in order to restore a peaceful climate of exchange and harmony between the two parties.” Note Tenke is one of the world’s most important sources of cobalt, a mineral used in electric car batteries.

Egypt: Saudi Arabia became the latest Gulf state to support Egypt yesterday after depositing $5bn in the Egyptian central bank. The move is part of the Kingdom’s efforts to support the Egyptian economy, which has increased pressure from Russia’s war on Ukraine. Qatar on Tuesday pledged to pump $5bn into investments in Egypt, while Abu Dhabi wealth fund ADQ made a roughly $2bn deal to buy Egyptian state-owned stakes in publicly listed companies earlier this month. Meanwhile, the Egyptian government said that it had approved a draft agreement for Saudi Arabia’s Public Investment Fund to invest in the country without giving the value of any potential deals.

Guinea: Guinea’s finance ministry has indicated that the country’s public debt sustainability indicators remain at moderate risk of distress, despite refinancing risks for domestic debt, foreign exchange risks for external debt, and interest-rate risks. Meanwhile, the public and guaranteed debt stock rose 9% y/y to $6.95bn, while external debt was $3.92bn and domestic liabilities were $3.02bn. The ministry’s report further noted that the debt ratio has remained below the 70% of GDP threshold required by the Ecowas bloc, giving room to raise financing for socio-economic infrastructure. The debt ratio complies with the 35% level for concessional loans required by the International Monetary Fund and the World Bank.

Kenya: To ease pressure on the fiscus, lawmakers in Kenya have approved road tolls. The National Assembly committee, in a report approving the national toll fund, noted that the Kenyan road sector has an annual funding deficit of over KES 100bn and pending bills of KES 1trn. Meanwhile, outstanding maintenance backlog totals 160,876km, estimated at KES 400bn to date. According to the report, tolling “externalizes the funding burden from the exchequer, hence permitting for alternative use of freed resources, while at the same time expanding the scope of public services that can be delivered by the government.” Kenya will plug funding shortfalls when toll collections are below the amount required to run and maintain tolled roads, and a  toll-free alternative will be provided to road users where feasible.

Rwanda: Data from the central bank of Rwanda showed that the current account deficit narrowed to 10.9% of GDP in 2021 from 11.9% in 2020. Zooming in on some of the components, the trade deficit widened to $2,04bn in 2021 from $1.97bn a year earlier on the back of rising imports. Specifically, imports increased by 17% to $3.2bn on consumer and energy goods, increasing international food and oil prices. Meanwhile, exports recovered from the pandemic-induced slump, rising by 53% y/y to $1.17bn. With energy and food costs remaining elevated, imports could remain underpinned, and therefore risks for a further widening of the trade deficit exist.

Despite the improvement in global risk sentiment over the past few sessions on the back of progress in talks between Russian Ukraine, March has been mostly characterized by bouts of risk-off sentiment amid Russia’s invasion of Ukraine, which has underpinned higher commodity prices in particular oil and wheat. As a result, some African oil-importing countries have come under pressure, and there has been a spike in currency volatility in the African FX basket. Additional pressure has come from tightening global financial conditions as the US Federal Reserve embarks on its rate hiking cycle.

At around 19.0%, the Ghanaian Cedi (GHS) is now the most volatile currency among those tracked by ETM, surpassing the Zambian Kwacha. In addition to unfavourable external developments, the GHS has weakened on the back of concerns that the country will not achieve its revenue and debt targets. The GHS has lost more than 9% against the USD on a month-to-date basis and is ranked the second-worst performer among African currencies. Volatility in the Kenyan Shilling has also risen sharply over the past 30-days, with the KES plunging to record low levels as current external headwinds and factors such as increased dollar demand from importers and a persisting current deficit weigh.

While geopolitical risk appears to be dissipating, the situation remains fragile. African countries remain exposed to high commodity prices, particularly oil and wheat, which will affect inflation, current accounts, and budget balances. In addition to tightening global financial conditions, we see further upside risks for FX volatility in the near term, especially in countries with weak fundamentals.

Fixed Income: Kenya’s bond curve bear flattens on the back of the hawkish shift from developed market central banks

In line with the broader bias across the global bond market over the past couple of months, Kenya’s local currency bond curve has bear flattened, reflecting the hawkish pivot from central banks across developing nations. While the Central Bank of Kenya decided to leave interest rates on hold this week, stating that inflation expectations remain contained, the market is clearly of the opinion that inflation risks are skewed firmly to the upside, underpinning bets that the CBE will be forced to raise rates in the coming months. 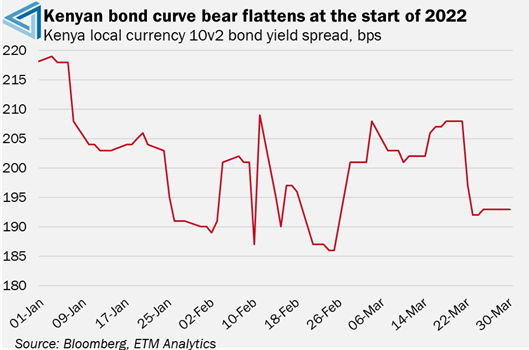 Since the start of the year, Kenya’s shorter-dated 2024 local currency bond yield has climbed nearly 60bps to sit at 10.90%, according to Bloomberg data. Movements further out on the curve have still been notable but have been less pronounced than those on the front-end, with the longer-dated 10yr bond yield rising 33bps to 12.83%. While much of the bearish impetus in Kenya’s bond market can be linked to global inflation risks and the hawkish shift in global monetary policy, it must be noted that increased fiscal risks are also contributing to the shift higher in yields across the curve.

Looking ahead, although the central bank has said that inflation is expected to remain relatively contained in the months ahead, we expect the bearish bias in Kenyan local currency bonds to persist in the months ahead. This notion is underpinned by expectations for a continued slide in the country's fiscal position against the backdrop of rising interest rates in developing nations, both of which will be bearish for Kenyan bonds. While the flattening bias is likely to remain intact, given how much fiscal risk is baked into Kenyan bonds and expectations for a gradual tightening of monetary policy in Kenya, it is improbable that we would see the curve invert in the foreseeable future.

Wednesday saw another bold move from an African central bank, with the Bank of Mozambique announcing a 200bps rate hike. Yesterday’s move from the Bank of Mozambique saw its benchmark MIMO Rate rise from 13.25% to 15.25%, a level not seen since 2018. The aggressive rate hike came on the back of a substantial upward revision from the central bank to its inflation forecasts for the short and medium-term. 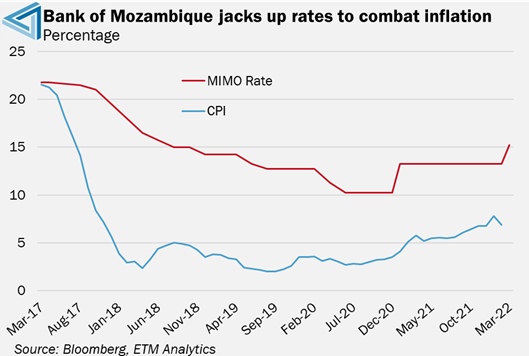 The Monetary Policy Committee said in its statement that the sharp upward revision to inflation reflects the materialization and exacerbation of risks, especially the escalation of the geopolitical conflict in Europe and the natural disasters that struck the centre and north of the country. The inflation forecasts point to an acceleration in headline and core inflation, reflecting the direct and indirect impact of rising fuel and food prices despite the Metical’s stability.

Policymakers said that the marked increase in the MIMO Rate aims to keep inflation under control to allow the beginning of a gradual transition to single-digit interest rates in the longer term amid the resumption of the Program with the International Monetary Fund and the implementation of natural gas projects. The Committee said that it would continue to monitor the evolution of risks and uncertainties associated with the forecasts to achieve its primary goal of low and stable inflation.

Regarding economic growth, the central bank said that it expects the recovery to persist in 2022, despite forecasts of slowing external demand. The sustained recovery will be supported by the removal of restrictive Covid containment measures and the implementation of energy projects in the province of Inhambane and the Rovuma basin. This comes on the back of deepening reforms and greater concessional financing to the country amid the resumption of the country’s IMF program.