The ceasefire between the Morocco government and the Polisario Front in the Western Sahara region appears to have ended. This is worth monitoring because of the negative repercussions for the fiscal outlook and diplomatic position of Morocco should the conflict escalate, particularly for equity investors who have grown used to treating Morocco as the "steady-eddy" of Africa.

The spark for clashes was Polisario's blockade (since 21 October) of a road through Guerguerat on the Moroccan-Mauritanian border. Polisario regard the road as an illegal construction and the Moroccan government regards the blockade as an act of banditry. The historic context dates back to the Spanish colonial withdrawal from the region in 1975 and the subsequent war between Polisario and Morocco between 1975 and 1991. 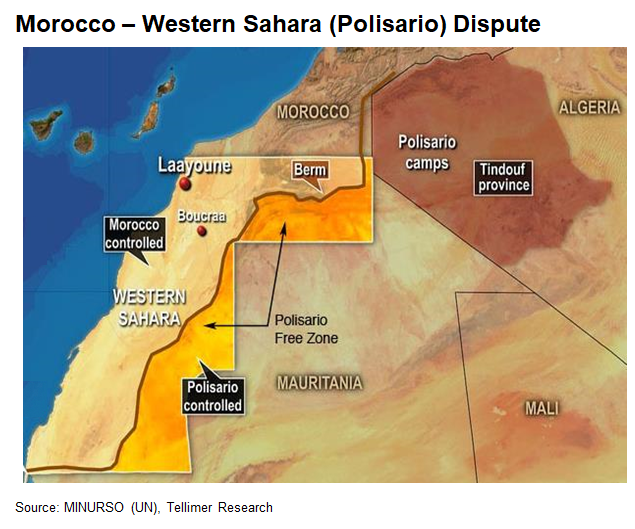 Morocco's fiscal deficit is heading close to 8% of GDP in 2020 before a gradual reduction to nearer 2.5% by 2025, according to IMF forecasts. This should drive gross government debt down too (currently about 77% of GDP).

Should a sustained escalation in the conflict with Polisario occur then the fiscal repercussions are clearly negative. Morocco's annual military spend as a percentage of GDP averaged about 5% during the 1975-91 war. Subsequently, it has averaged 3.5% and in 2019 it was merely 3.1%. 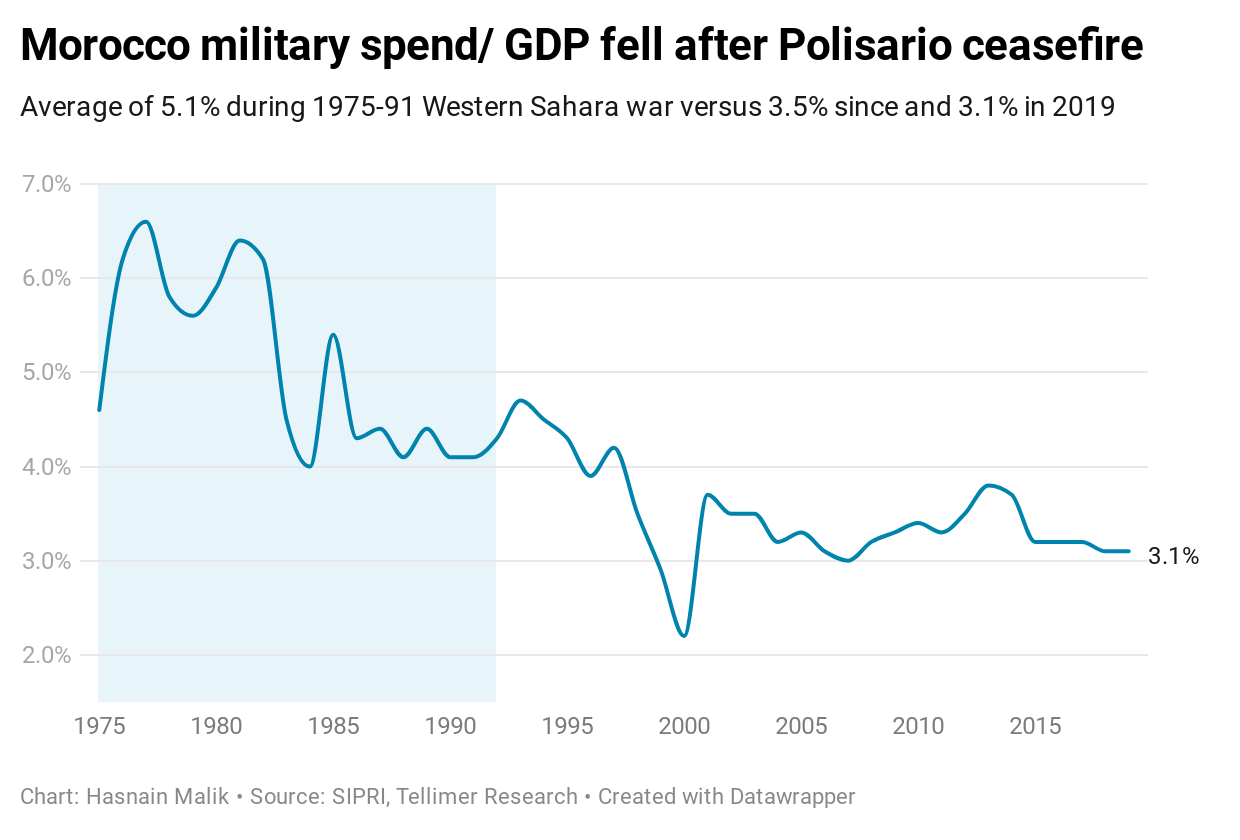 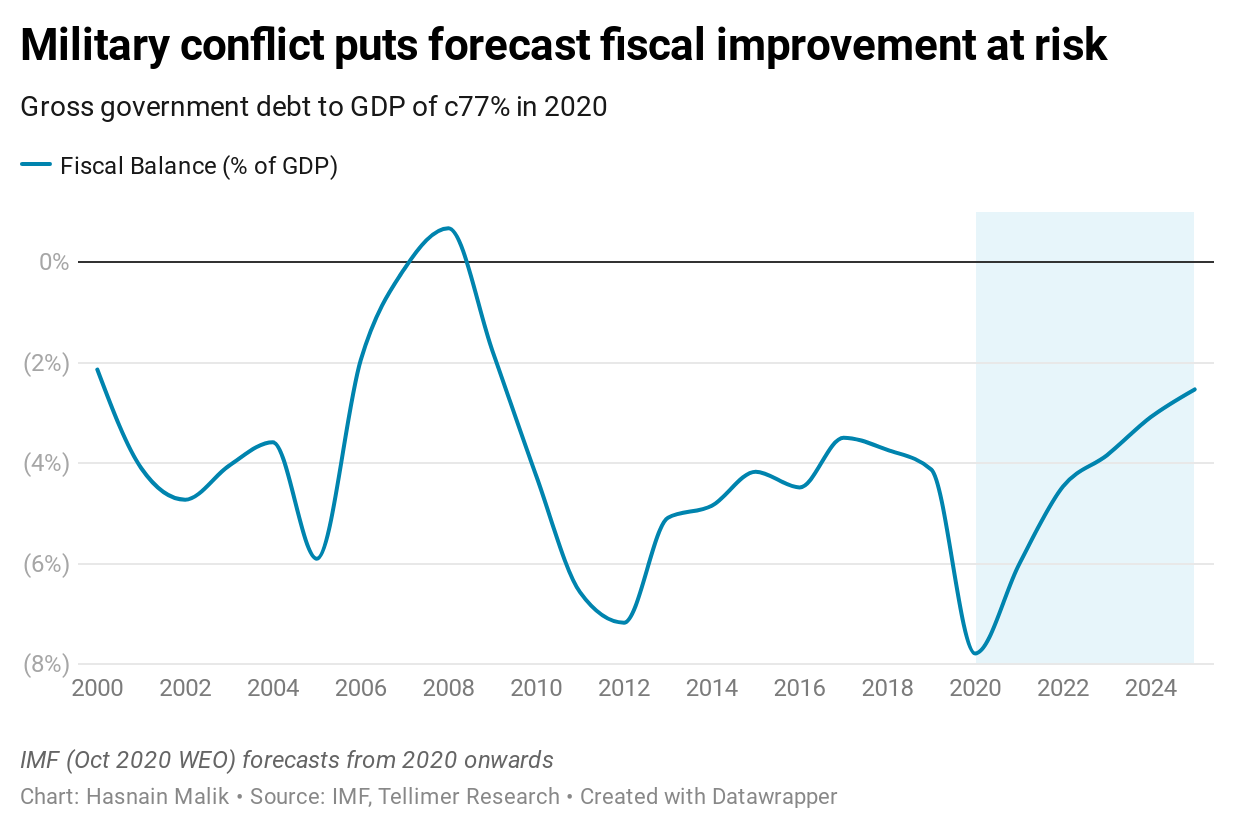 Algeria — The biggest direct danger from an escalated conflict is the potential involvement of Algeria (a long-time supporter of Polisario). Algeria's military spend over the last decade is almost triple that of Morocco. Any attempt by Morocco to change the balance of power in Western Sahara may be viewed as an indirect challenge to Algeria at a time when there is significant political pressure within Algeria. The Algerian military deep-state, under pressure to deliver democratic reforms, rather than a personnel shuffle alone, to a protesting population, no longer provided with the welfare benefits it once was, may find it expedient to focus attention on an external threat. We note though that the initial resumption of Morocco-Polisario clashes have taken place in Guerguerat, near the south-west border with Mauritania and about as far away from the Algerian border as possible.

US — Morocco has been closely aligned with the US, particularly since the start of George W Bush's "war on terror". However, the recent overt pressure by the US (albeit under the outgoing Trump administration) on Sudan to normalise relations with Israel may act as a precedent for how the US calculates its response to escalation of conflict with Polisario.

EU — Morocco has also enjoyed good relations with the EU (which accounts for 65%, 85%, 60%, 65% of exports, remittances, foreign direct investment and tourism, respectively). Beyond the economic links, the EU has found an alignment of interest on the issue of undocumented maritime migration from North Africa. Indeed, in February 2019, the European Parliament voted in favour of the Sustainable Fisheries Partnership Agreement between the EU and Morocco, which allow EU vessels to fish (in return for financial payment to Morocco) in disputed Western Sahara waters (in spite of rulings in the EU Court of Justice deeming such activity illegal). However, Morocco's actions in Western Sahara have been referenced by countries in the southern part of the EU, which seek to minimise the relocation of manufacturing to Morocco (eg by obstructing negotiations between the EU and Morocco over a Deep and Comprehensive Free Trade Agreement, which would lower tariffs further, but where there has been no progress since 2014).

The strategic and historic context for the most recent clashes is as follows.