Moody's to provide rating update on SA, Angola to buyback $750mn of Eurobonds

China’s economy is stumbling at the moment given the spike in domestic COVID-19 cases and the fallout from the war in Ukraine. The Caixin/Markit Manufacturing Purchasing Managers Index fell to 48.1 for March which is the steepest rate of contraction since February 2020. Given this backdrop the expectation by the analytical community is that Beijing will react swiftly with fiscal support via infrastructure projects and potentially tax and fee reductions.

Gold rose yesterday following a rise in geopolitical tensions as Russia’s President Vladimir Putin threatened to halt all contracts with Europe with 1/3 of its gas unless they agreed to pay for the gas in roubles. The yellow metal finished the session at $1937.23/oz and this has been the pivot for much of today’s trading session as investors assess the short term impact of the dollar and deluge of economic data in the form of global PMI’s today.

Oil prices remain under pressure this morning, extending yesterday’s drop as the market focuses on the US release of its strategic reserves. Brent has dropped to around $104.50 per barrel while WTI is near $100 as the US confirmed that it would release 1mn barrels per day from its reserves for six months. This announcement has largely overshadowed the OPEC+ meeting, which took place yesterday and brought with it no surprises. The cartel and its allies agreed to a 432k barrel per day increase for May, with the meeting once again wrapping up in record time and paying no attention to the Russia-Ukraine war.

South Africa: Although Moody's usually announces any reviews of SA's credit rating after hours, this still holds the potential to influence the ZAR's performance and set the stage for the week ahead. A combination of the commodities windfall, the improvement in fiscal data that points to the prospect of a smaller than expected budget deficit and the proposed reforms from the government will all assist SA at the margin. Less constructive will be the state of Eskom, Transnet and other SOEs, coupled with the record high unemployment rate and the structural constraints the economy faces. However, there should be enough to shift the outlook from negative to stable. At the margin, this would lend some credibility to the slow progress SA is making, albeit that the commodity supercycle may be making many of SA's ills.

Botswana: Statistics Botswana yesterday announced that a number of data releases would not be released due to the ongoing population and housing census. These data included GDP for 4Q 2021, international merchandise trade statistics January 2022, index of the physical volume of mining production stats brief  Q4 2021, electricity generation and distribution Stats Brief Q4 2021. The expected date for release is now the end of April 2022, and updates are expected in due course.

Egypt: The US Department of Agriculture’s Foreign Agricultural Service has forecast that Egypt’s wheat imports could fall to 11mn tons in the season that kicks off in July. That would be the lowest in nine years and provides the latest sign of how surging commodity prices are curbing demand in the wake of Russia’s invasion of Ukraine. Egypt has been struggling to maintain a bread subsidy program used by about 70mn of its citizens. The coronavirus pandemic is hitting the national budget, and surging wheat prices are exacerbating the challenge.

Kenya: Headline inflation Kenya reversed a 5-month slowing trend in March, accelerating to 5.6% y/y from 5.1% y/y in the month prior. On a m/m basis, prices climbed 0.9%. Inflation in Kenya quickened on the back of higher food prices such as wheat due to the ongoing war in Ukraine. The food and non-alcoholic drinks sub-component, which comprises a third of the inflation basket, rose 9.9% from a year ago, compared with 8.7%  a month prior, due to the increase in the cost of items such as cooking oil and wheat flour. While the Central Bank of Kenya earlier this week kept its policy rate unchanged as it sees inflation anchored within its target range of 2.5-7.5% in the near term, upside risks exist. These include pressures from poor or delayed rainfall, higher fuel costs, and currency depreciation.

Kenya: Kenyan Airways CEO Allan Kilavuka, in an interview, said that the airline had been given approval by the board to resume fuel hedges to lower costs. The board gave approval for the carrier to hedge prices for more than 35% of its fuel needs and is in talks with the African Airlines Association for bulk fuel purchases in a drive to cut costs. Fuel accounts for at least a quarter of costs for the airline, in which the Kenyan government has a 48.9%

Tanzania: President Samia Suluhu Hassan has noted that Tanzania is in talks with the International Monetary Fund for a $700mn loan as it adjusts its borrowing strategy to take on more concessional loans and reduce the risk of debt distress. The move is part of Hassan’s wider plan to boost Tanzania’s fiscal position after the IMF in September raised the country’s risk of debt distress to moderate from low. According to Hassan, “we have redirected the loan program. I am looking for concession, not for commercials.” The talks, if successful, will result in the country’s first IMF policy-reform funding program in a decade. Note that Tanzania’s debt climbed 20% to $37.1bn last year.

Uganda: Reports citing an official from the Bank of Uganda indicated that the central bank has prolonged orders for lenders to withhold discretionary payments such as dividends and bonuses to build up capital for operational needs until the economy fully recovers from the effects of the coronavirus pandemic. Note that the initial directive came into effect in March 2020 after the outbreak of Covid-19, and no date has been set for when it will be lifted.

Price pressures in Zambia continued to ease in March. Specifically, headline inflation slowed to a more than 2-year low of 13.1% y/y from 14.2% y/y in February. This was the eighth straight month price growth in the economy has slowed and resulted from an easing in food and non-food price growth. The former slowed to 15.3% in March from 16.0% in the month prior, while non-food inflation decelerated to 10.3% from 11.8% in February. 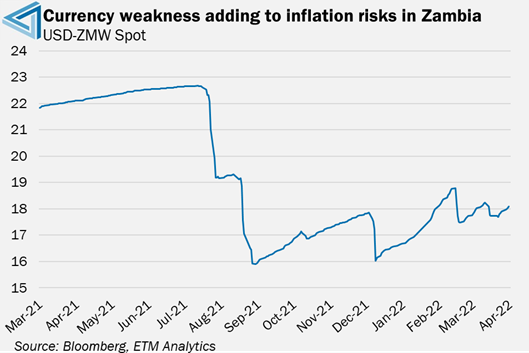 The continued deceleration in inflation may see the Bank of Zambia (BoZ) decide to keep its policy rate unchanged at the May meeting. That said, it will need to assess the impact of surging agricultural commodities and oil prices caused by the Ukraine War. While Governor Denny Kalyalya in February said the BoZ expects inflation to continue trending towards its 6-8% target range over the next eight quarters, averaging 13.2% this year and 7.3 % in 2023, it is worth flagging that upside risks to the outlook exist. These include higher commodity prices, especially oil and wheat, amid the ongoing war in Ukraine and a weaker Kwacha. While a waiver of 15% wheat import duty should be positive for consumers, it could be offset by the removal of fuel prices as pump prices inevitably increase.

Regarding the Zambia Kwacha, it has started 2022 on the back foot and is amongst the worst performing African currencies against the USD on a year-to-date basis. The ZMW has struggled mainly on the back of a dollar liquidity shortage. We expect the weakness to persist in the near term. The BoZ had to intervene in the market this week, injecting some liquidity to cover strategic demand pipelines. Going forward, aside from central bank intervention,  the finalisation of the International Monetary Fund programme will also be key to the currency’s performance. The approval of the programme could provide some fresh impetus for the Kwacha and potentially see it reverse its current course.

Fixed Income: Angola offers to buyback $750mn of Eurobonds and issue new Eurobonds for the first time in 2 years

Angola has gained the interest of many investors on the back of its impressive reform rollout and the shift towards a more sustainable fiscal path. Angola is also benefitting massively from soaring international oil prices, which have provided a massive boost to the country’s trade and fiscal accounts. While Angola is attempting to diversify its economy, the country is still heavily dependent on oil. The oil sector is the single largest contributor to tax revenue and hard currency inflows.

The shift in policy and the rally in international oil prices has resulted in a wave of credit rating upgrades for Angola. Angola’s economy rebounded from a five-year recession in 2021 and is forecast to expand by 2.9% this year. The marked improvement has significantly boosted investor confidence in Angola, which has been reflected by the recovery in Angola bonds. For context, Angola’s 2025 Eurobond yield has fallen from a peak of around 35% at the onset of the Covid-19 pandemic to sit at 6.38%.

In a bid to further improve its fiscal dynamics and external debt burden, the Angolan government said in a statement released on Thursday that it aims to buy back as much as $750mn of Eurobonds maturing in 2025 and 2028 and issue one or two new Eurobonds for the first time in more than two years. Officials added that the repurchase, which is subject to financing conditions and the new sale, would allow Angola to proactively and efficiently manage its external liabilities.

While the government didn’t attach a size to the planned Eurobond sale, the Finance Ministry said in February that it planned to raise $2.8bn selling hard currency bonds in 2022. We remain bullish on Angolan assets given the prudent shift in fiscal policy from the government, together with expectations for oil prices to remain elevated in the months ahead.

Macroeconomic: Soaring shipping costs are raising prices around the world

Inflation dynamics remain in focus at the start of the new month. Investors and central bankers are trying to gauge whether the current bout of inflation is transitory or here to stay and the possible ramifications it could have on the trajectory of monetary policy going forward. One of the main factors pushing up consumer prices around the world has been the marked increase in global shipping costs as supply chain pressures persist. 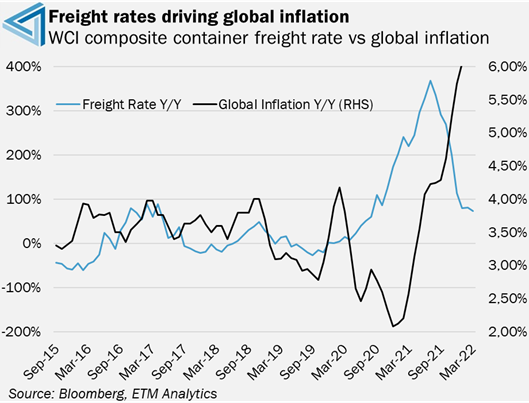 The price of shipping a container on the world's transoceanic trade routes had increased seven-fold in 18 months following March 2020, while the cost of shipping bulk commodities has spiked even more. Research from the IMF shows that the inflationary impact of those higher costs is poised to keep building through to the end of this year.

Higher shipping costs hit prices of imported goods at the dock within about two months and are quickly passed through to producer prices. The inflationary impact of shipping costs is expected to continue to build through to the end of 2022. Moreover, the war in Ukraine is likely to cause further disruptions to supply chains, which could keep global shipping costs higher for even longer.