Indications that the Fed pivot towards less aggressive tightening and then stable monetary policy helped the USD off its highs on Friday in a move that would've caught many investors offside. US Treasury yields backed off their highs, and an aggressive long USD capitulation followed as they did. That spilt over into global markets and even assisted EM assets in recovering from the pressure they had experienced through most of Europe's trading session.

Egypt: Over the weekend, Egypt’s Fuel Automatic Pricing Committee, in its quarterly review, announced that it would keep the price of fuels unchanged in local markets in the next three months. Prices of Octane 95 fuel stand at EGP 10.75 per litre while Octane 92 is being sold at EGP 9.25 and Octane 80 costs EGP 8 ($0.4098). The unchanged fuel prices might help alleviate some of the inflation pressures in Egypt and provide some relief to consumers. Note that inflation in Egypt quickened at the fastest pace in four years in September.

Ghana: Reporting on talks held during the World Bank/International Monetary Fund annual meetings, Ghana’s finance ministry said that a clear path toward the final details of a program has been agreed up by both parties with, a goal of reaching a staff-level agreement by the of the year. The ministry added that a pathway towards fiscal sustainability has also been “extensively discussed” and that negotiations will continue with the IMF mission team expected back in Ghana in the “next few weeks.” Securing an IMF deal remains critical to Ghana addressing its deteriorating macroeconomic conditions.

Nigeria: Ruling All Progressives Congress presidential candidate for the 2023 elections, Bola Tinubu, has vowed to phase out costly fuel subsidies and more than triple oil production to help accelerate growth if he is voted into power. Tinubu added that he will work closely with the Central Bank of Nigeria to “carefully review and better optimize” the country’s exchange rate system. He also proposed basing the country’s budget on the projected level of government spending instead of the dollar value of projected oil revenue. Tinubu is one of the front runners to succeed President Buhari, and his main rivals are Atiku Abubakar of the main opposition Peoples Democratic Party and Peter Obi from the Labour Party.

Mozambique: S&P affirmed Mozambique's long-term foreign currency debt rating at CCC+, with the outlook remaining stable. S&P said that the stable outlook balances the view of Mozambique's ability to meet its financial obligations in the next 12 months against uncertainties as to when significant liquefied natural gas (LNG) production will begin, and the associated revenue will become available to the government. Significant delays in this regard could undermine the government's ability to meet its Eurobond obligations over the medium term. Factors that could lead to a positive rating action are if S&P assesses that additional economic or external shocks, or further delays to the Area 1 LNG project, are likely to make the government less willing or able to service its commercial debt obligations in a timely manner. Conversely, the ratings could be downgraded if the large Area 1 LNG project sustainably resumes, reducing the risk of a distressed debt restructuring of Mozambique's 2031 Eurobond.

Egypt: S&P on Friday affirmed Egypt's long-term foreign currency debt rating at B and the outlook stable. According to the agency, the stable outlook reflects the expectation of Egyptian authorities' commitment to economic reform, the country's strong economic growth prospects over the next 2-3 years, as well as the importance of stability in Egypt to the region as a whole,  will encourage both official and commercial lenders to provide sufficient funding to meet the country's external financing needs. S&P added that they could consider a negative rating action over the next year if multilateral and bilateral funding support, including an IMF program, is not forthcoming and additional GCC financial support appeared to be waning.

Zambia: Moody's on Friday affirmed Zambia's long-term foreign debt rating at Ca, with the outlook remaining stable. Moody's said that the decision to affirm the Ca rating balances Zambia's limited external financing sources, very weak governance, exposure to environmental and social risks, and ongoing debt default against recent improvements to the economic outlook and efforts to improve fiscal management in the context of the IMF program approved earlier this year. Meanwhile, the stable outlook implies that the government's credit profile is unlikely to improve materially until after the current debt restructuring exercise is completed.

Zimbabwe: Finance Minister Mthuli Ncube cut Zimbabwe’s growth forecast for the second time on Friday. The minister expects the economy to expand by 4.2%-4.3% this year from a previous estimate of 4.6%. Zimbabwe initially forecast economic growth of 5.5%. The latest growth forecast compares with the IMF’s expectations of 3.5%. On the fiscal front, the minister said that expenditures for next year are projected at Z$3.4trn, of which 44.7% will go toward compensation of employees at Z$1.5trn while capital expenditure would be allocated 23.7%. Revenue collection is projected to be at Z$3.1trn, including Z$2.9trn tax revenue. Meanwhile, the budget deficit is forecast to be lower at 1.4% of GDP compared to a previous estimate of 1.5%.

South Africa: It is budget week, so this becomes one of the year’s most important events. Having exited the global pandemic and experienced the negative impacts of the war in Ukraine, this is a substantially different world than that in which the original budget was conceived. Fin Min Godongwana will first offer insight into how all these developments resulted in a deviation from what was originally budgeted before offering investors a glimpse of what the government might do to offset those effects at a fiscal level. Investors worldwide appear to be rewarding fiscal conservatism.

The Ghanaian cedi remained under the cosh of market bears on Friday, extending its drop to a record low north of 13.600 per dollar as uncertainty that possible debt restructuring could affect domestic bondholders and strong demand for dollars, driven by importers looking to stock goods before Christmas weighed. While the losses were modest compared to the cedi’s biggest drop in 22 years on Thursday, they added to year-to-date losses of almost 54% against the USD, making the currency the worst-performing among the 148 tracked by Bloomberg. 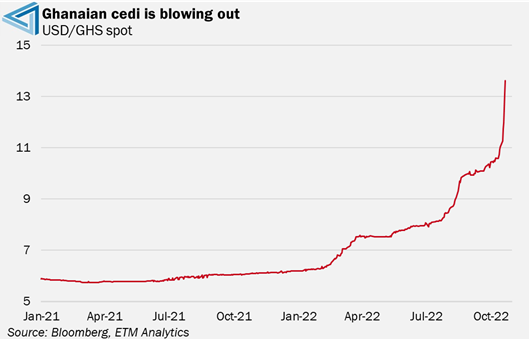 In addition to a rotation out of cedi bonds by foreigners, local investors are turning to foreign currency bonds instead of holding cedi bonds, given the uncertainty around debt restructuring. This rotation has triggered outflows and weighed on the cedi. Meanwhile, dollar demand remains robust despite several interventions by the Bank of Ghana, such as a special window to sell dollars to oil marketing companies to import oil and gas. Heightened demand against a backdrop of limited supply has added additional downside pressure.

While Ghana’s finance ministry provided an update on Friday, debt restructuring fears remain, which is set to increase demand for forex liquidity further. Despite being significantly undervalued, the broader bearish bias in the cedi is expected to persist in the months ahead.

Over the weekend, the big news in the fixed-income market was that Moody’s downgraded Nigeria’s sovereign credit rating. Specifically, Moody’s lowered Nigeria's local currency and foreign currency long-term issuer ratings as well as its foreign currency senior unsecured debt ratings to B3 from B2 and placed them on review for further downgrade. The agency said in its statement that the downgrade was driven by the significant deterioration in Nigeria's government finances as well as its external position, exerting increasing pressure on the sovereign credit profile despite a strong increase in international crude oil prices in 2022. 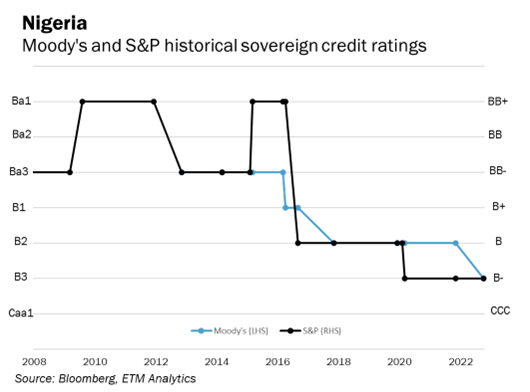 Moody’s added that the sharp decline in oil production in 2022 and the extension of the expensive oil subsidy have almost entirely eroded the boost to government revenue and exports that would otherwise have been anticipated from higher oil prices. Note that oil prices have been 42% higher on average than in 2021. Nigeria’s oil production has plunged 32% since the start of the year. Moody’s noted that the constraints on oil production increasingly appear structural, caused by repeated theft and lack of investment in infrastructure.

Looking ahead, Moody’s highlighted that the scope for the government to deliver on fiscal consolidation is constrained, adding that it expects government debt affordability to weaken further in the years to come from already very weak levels. Moody’s said risks are skewed in favour that external and fiscal pressure further intensifies and constrains the government's access to funding.

Macroeconomic: African central banks have a tight line to walk to bring inflation under control

Sub-Sahara Africa is currently facing one of the most challenging economic environments in years, marked by a slow recovery from the pandemic, rising food and energy prices and high levels of public debt. Decade high levels of inflation have been crippling the region and are an urgent issue that needs to be dealt with in order to support growth. 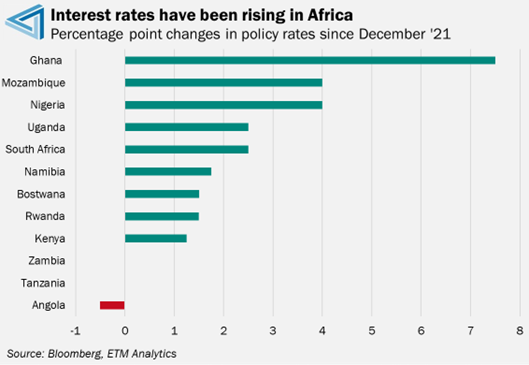 The prices of key staples such as maize and wheat have increased beyond the prior record highs reached in 2019, contributing two-thirds of overall inflation in fragile states and one-half elsewhere in the region. Meanwhile, higher global energy prices and the strong dollar have also fed through to inflation indirectly via transportation and tradable goods like household products.

The IMF estimates that around 12% of the region’s population will face acute food insecurity by the end of this year due to living costs surging. In the coming months, policymakers in the region will need to proceed with caution when it comes to increasing interest rates in order not to jeopardize the economic recovery. However, with developed market central banks remaining hawkish in terms of monetary policy, African central banks will have to risk higher rates in order to not fall behind the curve, which could lead to notable currency weakness and further exacerbate the inflationary crisis.