Investors always knew that the inflation print had the potential to impact market sentiment quite heavily, and it did not disappoint. Coming in lower than market expectations, the inflation reading eases the pressure on the Fed to act quite as aggressively. Almost immediately, stock markets rallied to boost risk appetite, and higher beta currencies have found themselves appreciating strongly. The USD’s overvaluation is now unwinding and has a lot further to go. Any signs of weakness in the upcoming economic data will only compound the USD’s sell-off. Also of interest is the outcome of the US mid-terms. Early indications are that the Republicans will regain control of the House while the Senate also remains in the balance. A more conservative government will ease the pressure on the Fed even further and elevate the possibility of a deeper USD sell-off. So, the EUR has surged back towards 1.0200/dlr, while the GBP is now trading at 1.1675. Even the JPY has made a strong comeback, dipping back to 141.90/dlr.

The USD remains firmly on the defensive. It has not recovered, and investors continue to position themselves for the Fed’s pivot. Last week’s US inflation data was the main catalyst for a sharp move lower, and it is unlikely that the USD will recover other than temporarily and for technical reasons. Increasingly it appears as though the USD may have enjoyed its best period yet, and in the same way the Fed led global central banks to tighten aggressively, it might also be the first to pause. A more convincing labour market softening may be necessary to convince the Fed to pause altogether, but that is only a matter of time. The PMI data is softening, consumptive demand is coming under greater pressure, the credit cycle has turned, and the residential property market is now coming under significant pressure. The labour market will typically be the last to respond, and while the Fed may believe that it has the tools to engineer a soft landing, the risk is that growth is negatively affected more than first anticipated.

Chad: Finance Minister Tahir Hamid Ngulin on Friday announced that Chad had reached an agreement for the restructuring of its overseas debt with key creditors, including Glencore Plc. Ngulin, in a social media post, said that "after nearly two years of discussions with its main external creditors, Chad is pleased to have reached an agreement on the treatment of its external debt." The agreement marks the first success under the Common Framework, a mechanism designed by the Group of 20 wealthy nations in November 2020 to accelerate the restructuring of poor countries' loans. The accord will unlock a disbursement from the International Monetary Fund under an agreed $570.8mn bailout. The lender has said it could not provide any more support to Chad until a deal was reached on its debt.

Democratic Republic of Congo: Ratings agency Moody's on Friday upgraded the DRC's credit rating to B3, the sixth lowest score and on par with Nigeria and Angola from Caa1. The agency also changed the outlook to stable from positive. According to Moody's, the upgrade recognizes the country's strengthening economic and fiscal prospects fostered by institutional improvements supported by the IMF program that started in July 2021. Meanwhile, the stable outlook reflects the view that the credit risks are balanced at B3 between the potential for more positive developments on the DRC's credit fundamentals if structural reforms continue, and elevated commodity prices support further improvements in economic and fiscal strength along with a further reduction in external vulnerability.

Burkina Faso: S&P affirmed its 'CCC+' long-term and 'C' short-term sovereign credit ratings on Burkina Faso, with the outlook remaining stable. The agency noted that the stable outlook balances the political, economic, and budgetary headwinds stemming from the recent coup and the worsening security situation in the Sahel region against Burkina Faso's membership of the West African Economic and Monetary Union. The ratings could be lowered if institutional instability leads to a deterioration in economic growth and fiscal metrics or if financial sanctions and economic deterioration lead to heightening rollover risks on the country's commercial debt in the next 12 months. Conversely, the rating could be raised if political stability improves, allowing for a stronger-than-expected consolidation path.

Kenya: Official data from the Central Bank of Kenya showed that Kenya's public debt rose by 9% y/y from KES 7.99trn at the end-September 2021 to KES 8.7trn at the end of September 2022. External liabilities increased 7% to $39.36bn while domestic debt grew 11% y/y to KES 4.37trn during the period. Meanwhile, President Ruto said that the Kenyan government will no longer borrow money at interest rates of more than 10%, adding that the cost of debt had become "unacceptable." According to Ruto, "if we find that in the market we cannot find money at 10%, we will go back and re-look at other sources." Ruto is seeking less costly loans after a debt-fuelled infrastructure construction drive by his predecessor saddled Kenya with high-interest commercial debt.

Ghana: Ghana's creditors are close to formalizing a group for debt talks, according to a Reuters report quoting sources close to the matter. The creditors have reportedly chosen Rothschild & Co and Orrick, Herrington & Sutcliffe LLP as advisors, and the Group should be announced soon. Meanwhile, the government still has not said whether it will move forward to rework its overseas debt.

Ghana: According to a ruling party official Finance Minister Ken Ofori-Atta plans to present his 2023 budget statement this month despite demand from the ruling party and opposition figures that he should step down. The minister has come under pressure as Ghana grapples with the worst economic crisis in years. Parliament last Thursday began debate on a motion to reject Ofori-Atta, introduced by the minority National Democratic Congress (NDC) party. Instead of proceeding to a vote, Parliament created an eight-person committee to examine the claims and submit a report within seven working days.

Nigeria: Authorities in Nigeria have noted that they plan to grant a concession on a $1.3bn hydropower plant now under construction and are seeking bids from private investors to operate the China-funded plant. According to Nigeria's privatization agency, the Zungeru Hydroelectric Power Plant, the biggest of its type in the country, is expected to generate 700 megawatts and is being funded by loans from China's Exim Bank, the Bureau of Public Enterprises. The agency added that the project will meet around 10% of the country's domestic energy needs when completed. Bids are expected to be submitted by November 2024, and the agency hopes to complete the concession by March next year.

Forex: Nigerian naira halts its slump in the parallel market

The Nigerian naira in the parallel market gained around 22% against the dollar last week, rising from a record plunge amid reduced demand for foreign currency as authorities clamped down on money trading. The naira firmed to 700 per dollar on Friday, compared to a record low of 890 per dollar in the week prior. Still, continued shortages of the dollar meant the naira exchange rate in the official market, which is tightly controlled, dropped to a fresh low of NGN 444.05 per dollar before rebounding to close at NGN 443.38. 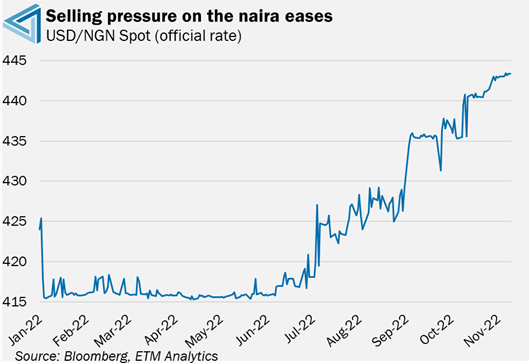 According to the President of the Association of Bureau de Change Operators of Nigeria, surveillance from the central bank and anti-corruption authorities has somewhat dampened demand for dollars in the parallel market. The demand was recently driven by the central bank’s announcement last month that it will issue redesigned 200, 500, and 1,000 naira notes from mid-December to mop up excess cash in circulation. This triggered a rush to purchase dollars by Nigerians with undeclared naira stashes.

While the naira in the parallel market has rebounded, it nevertheless continues to trade at a significant premium to the official market rate. Friday’s close in the parallel market represents a premium of almost 58% and risks for it to widen amid still strong dollar demand and limited inflows. A widening premium could therefore keep inflationary pressures in Nigeria robust.

The focus in the fixed income market over the weekend is also on Nigeria after Fitch downgraded the country’s sovereign credit rating by one notch to B-. Fitch left Nigeria’s outlook at stable. The global ratings agency said in its report published on Friday night that the downgrade reflected the continued deterioration in Nigeria's government debt servicing costs and external liquidity despite high oil prices in 2022. 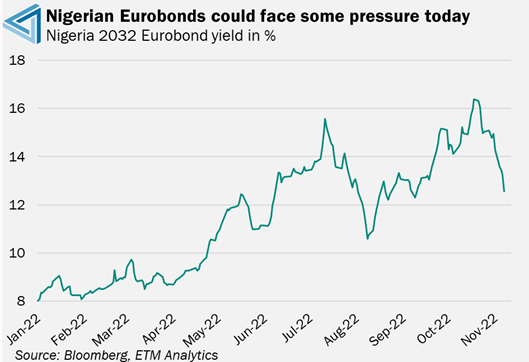 Fitch said that low oil production and the expensive subsidy on petrol have consumed most of the fiscal benefit of high oil prices in 2022 and will continue to stress already low government revenue levels. The ratings agency noted that the implementation of a subsidy reduction in 2023 would support Nigeria’s public finances, but constrained oil production and structurally low domestic non-oil revenue mobilization will limit potential gains.

Looking ahead, Fitch said that a worsening in external liquidity pressures, which would be reflected by a rapid decline in international reserve, increased financing constraints, or signs of difficulty in meeting debt servicing costs, could result in negative rating action. On the other hand, a reduction in external vulnerabilities, an easing of domestic FX supply constraints from sustained current account surpluses or a structural improvement in public finances could result in positive rating action.

According to a report from the Food and Agriculture Organization of the United Nations, food import costs across the worse are on track to hit nearly $2trn in 2022 as inflation and supply chain pressures buoy international food prices. World food prices soared to record levels in March after Russia invaded Ukraine, a key grains and oilseeds producer. While food prices have pulled back from the peaks seen earlier this year, they remain above last year's lofty levels. 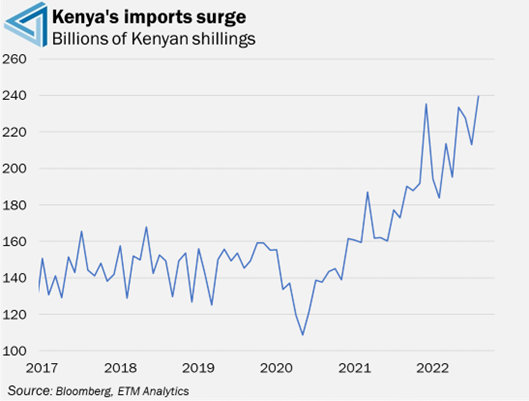 Countries dependent on food imports have been hit the hardest. Adding to the headwinds for food import-dependent countries has been currency weakness due to the strength of the USD this year. Regional inflation data released last week showed that inflation is still running hot in many African countries due to high food and energy prices.

The volume of food imports of low-income countries is projected to shrink by 10% due to the increased cost of imports. The UN report suggests that the nominal value of imports in dollar terms remains almost unchanged from last year. Importers are finding it challenging to finance rising international costs, signalling the importance of countries becoming less reliant on imports. In addition to elevated international food prices, several African countries are facing reduced food production as a result of extreme weather conditions. The combination of these two factors mentioned above has led to increased levels of food insecurity across the continent.