Global bond yields continue to edge lower this morning, with the market correcting after the massive sell-off seen early last week. UST yields are down despite some further hawkish talk from Fed officials, with the aggressive monetary policy tightening path seemingly mostly priced in now. Front-end tenors are, however, underperforming due to a rally in oil prices this morning, keeping near-term inflationary concerns embedded. The drop in yields has kept volatility levels in the market elevated, with a gauge of price swings for USTs still at its highest since the 2009 financial crisis. JGBs have also found a bid this morning, supported by key survey data that suggests that the economic outlook for the world’s third-largest economy remains weak, suggesting that the BoJ will be sticking to its contrarian loose monetary policy stance. This volatility may persist through the week ahead, given that liquidity levels have seen a plunge and key US labour market data is set for release. Any signs of a softening labour market may see traders continue to price in peak hawkishness from the Fed. However, a strong report could see a surge once again in yields as it would suggest that the Fed still has some way to go before effectively cooling economic activity enough to rein in inflation. This kind of volatility will keep other asset classes volatile, given how the treasury market is used to help determine the value of trillions in global assets.

Ghana: Moody’s downgraded Ghana’s long-term foreign debt to Caa2 from Caa1. The ratings were also placed on watch negative from a stable outlook. According to the agency, the rating downgrade to Caa2 reflects the recent macroeconomic deterioration, further heightening the government’s liquidity and debt sustainability difficulties and increasing the risk of default. Moody’s also placed Ghana on review for another downgrade, saying that the decision was prompted by the ongoing negotiations between the government and the IMF over a funding program that may include a condition for debt restructuring to ensure debt sustainability. Such a restructuring would likely be considered a distressed exchange and thereby a default under the rating agencyʼs definition. The review will evaluate the likelihood of a debt restructuring being a prerequisite to securing sufficient and durable financing from official sources to avert a fiscal and balance of payments crisis that is already unfolding.

Kenya: Price pressures in Kenya showed no signs of abating in September. Specifically, inflation in Kenya accelerated to 9.2% y/y, a 5-year high, from 8.5% y/y in August. The September reading surpassed Bloomberg consensus expectations of a less pronounced rise to 8.6% y/y and was driven by higher transport, electricity, and corn flour prices. Inflation in Kenya has accelerated for seven straight months, and further upside risks to the outlook exist due to the withdrawal of subsidies, new taxes and global price pressures. Last month, President Ruto scrapped a gasoline and corn subsidy and plans to drop those for diesel and kerosene by year-end.

Nigeria: The International Monetary Fund has reportedly approved a $750mn loan to Nigeria to help its 36 states push through reforms to attract investment and create jobs. The facility is set to help improve land administration, telecommunications infrastructure, public-private partnerships, investment promotion, and business regulatory requirements. Due to low revenues, several states struggle to pay salaries and are resorting to borrowing from the domestic bond market and banks to fund infrastructure projects.

Zambia: On Friday, Zambia’s Energy Regulation Board raised gasoline prices by 5.6% as tax waivers ended. Gasoline prices rose to ZMW 22.74 per litre from ZMW 21.54 per litre. Meanwhile, diesel prices increased by 13% to ZMW 26.16 per litre. Kerosene costs were reduced by 3.9% to ZMW 16.06 per litre. The price changes took effect over the weekend, and excise duty and value-added tax were reinstated on petrol and diesel, according to a statutory instrument issued by the finance minister. The increase in gasoline costs poses upside risks to inflation that has this year been limited by a firmer Zambian kwacha.

Zambia: Delivering the 2023 budget, Finance Minister Situmbeko Musokotwane said that he expects the budget deficit to narrow to 7.7% of GDP from 9.8% this year. The target comes despite Zambia making further cuts to copper mining royalties. According to the Minister, restructuring the royalty system is estimated to cost the government ZMW 2.8bn ($178mn) in lost revenue next year. Zambia plans to spend ZMW 167.3bn next year, and about ZMW 111.6bn of that will come from revenue and the rest from grants and borrowing. Although the minister allocated ZMW 18.2bn to external loan-servicing, it does not consider debt restructuring and will be subject to change once an agreement is reached with creditors. Other major takeaways from the budget were that economic growth is expected to expand by at least 4% in 2023 vs 3% this year, compared with an earlier estimate of 3.1%. Meanwhile, inflation is forecast to be within the 6-8% target range by the end of 2023.

Uganda: Consumer price inflation in Uganda rose further in September, coming in at 10.0% y/y from 9.0% y/y in August. On a month-month basis, consumer prices climbed 1.5% in September while core inflation accelerated to 8.1% from 7.2% in August, exceeding the Bank of Uganda’s (BoU) 5% medium-term target for five months. The year-on-year inflation rate was the fastest pace of price growth in the economy since July 2012. With the BoU having vowed to restore price stability even at the cost of economic growth, risks exist that the bank will continue to tighten monetary policy. The BoU has already hiked 250bps since June.

The Ghanaian cedi remained in the spotlight on Friday, with the currency plunging to a fresh low against the USD. The cedi weakened to close Friday’s session at 10.4417 per dollar, the lowest level since at least 1994 when Bloomberg started tracking the data. Heightened demand for dollars by importers after the Bank of Ghana held back supplies placed pressure on the cedi. 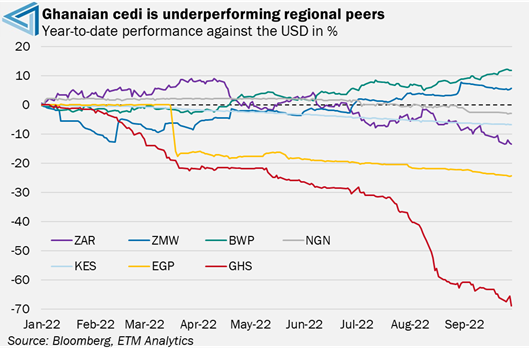 Ghana has been able to issue Eurobonds in recent years, which has bolstered its reserve position and allowed policymakers to support the currency. However, worsening fiscal dynamics and tightening global financial conditions have seen Ghana unable to issue Eurobonds this year. This has weighed on the foreign currency reserve level as the Bank of Ghana (BoG) has also deployed some reserves to try to support the worst-performing African currency on a year-to-date basis against the dollar. Since the end of August 2021, Ghana’s foreign exchange reserves have fallen by almost 33% to $7.7bn as of June 30, 2022.

With Moody’s on Friday having downgraded Ghana’s long-term foreign debt to Caa2 from Caa1 against a backdrop of recent macroeconomic deterioration, risks exist that the cedi will remain on the back foot this week. Beyond that, the non-deliverable forwards market continues to price for further depreciation. The 3-month tenor is trading almost 8% higher than the spot price.

Fixed Income: Money markets have regained their appeal as investors shy away from bonds and equities

The global bond market remains anchored in bear market territory as investors continue to rotate into cash. For context, the Bloomberg Global Bond Total Return Index is down more than 23% since its peak last year. Aggressive rate hikes from major central banks to contain inflation, even as growth slows, are sending shockwaves across fixed income markets. With inflation across the world still running hot, major central banks have shown little sign of lifting off the tightening pedal, with the likes of the Fed expected to raise rates further in the months ahead. 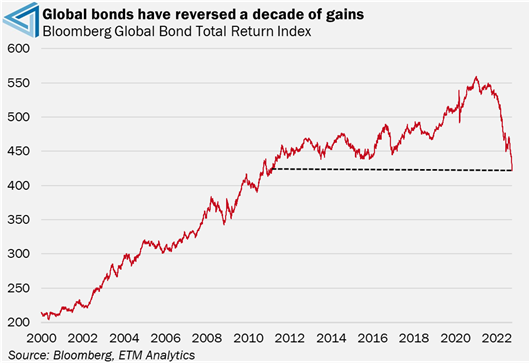 Data from Refinitiv showed that investors offloaded a net $22.07bn worth of global bond funds (sovereign and corporate) last week, in their biggest such weekly net sales since June 22. Note that USTs however ended the week firmer. An analysis of 24,589 emerging market funds showed investors drew $4.11bn out of bond funds and $2.35bn out of equity funds in an 11th straight week of net selling. African bonds also ended the week in the red, with the Bloomberg African Bond Index falling by just over 1%.

With the Fed showing little sign of turning less hawkish in its fight against inflation against the backdrop of mounting global geopolitical tensions and an ongoing energy crisis in Europe, the near-term outlook for fixed income markets is bearish. With investors weary of having exposure to bonds and equities during these volatile times, cash has regained the status of King. With the US Federal Reserve cranking interest rates ever higher, money market returns have risen markedly. According to Bloomberg data, around $4.6trnn is sitting in US money-market funds, near the record high of $4.8trn in 2020.

The Bank of Mozambique bolstered its status as one of the world’s most hawkish central banks on Friday. The BoM surprised markets by delivering another outsized 200bps rate hike, taking its benchmark MIMO rate to 17.25%. This is the most restrictive monetary policy has been since early 2018. The BoM is one of just four African central banks to have raised rates by 400bps or more this year. Since the lows in 2020, the policymakers have hiked rates by a combined 700bps.

The central bank said in its statement that the decision to deliver another outsized rate hike is to ensure the return of inflation to single-digit territory in the medium term, against a backdrop of expected ongoing volatility of energy prices in the global market, amid the prolonged Russia-Ukraine conflict. The central bank noted that the energy crisis could trigger a spiral of sustained domestic price increases.

The MPC said that it expects inflation to continue to accelerate in the short term. However, policymakers expect inflation to fall back into single digits in the medium term as the aggressive rate hikes take effect against the backdrop of a resilient metical and the high base effects of 2022. The MPC said that risks to the inflation outlook remain skewed firmly to the upside. Prospects for economic recovery in 2022 and 2023 remain, despite forecasts of slowing external demand. In its concluding remarks, the central bank said it would not hesitate to take the necessary corrective measures if inflation doesn’t subside. From a financial market perspective, the bold rate hike will help underpin the resilience of the local currency but will add to the headwinds facing Mozambique’s one and only Eurobond.