Sub-Saharan Africa plays the title role when it comes to mobile money, the digital payments technology that allows people to receive, store and spend money using their mobile phone. M-Pesa is undoubtedly the jewel in the sector’s crown, given its scale and the high activity of its customer base. But MTN Group and Airtel Africa also have sizeable mobile money operations, with good scope to grow across the SSA region. With Safaricom’s shares reaching new highs, and given our concerns relating to the Ethiopian expansion, we see scope for MTN Group and Airtel Africa shares to narrow their valuation discounts to Kenya’s bellwether telco champion.

Sub-Saharan Africa is the world leader in mobile money

According to GSMA, there are almost 550mn mobile money users in Sub-Saharan Africa, of whom almost 160mn are active. The region accounts for around half of the world’s mobile money service providers and users, and almost two-thirds of transactions. 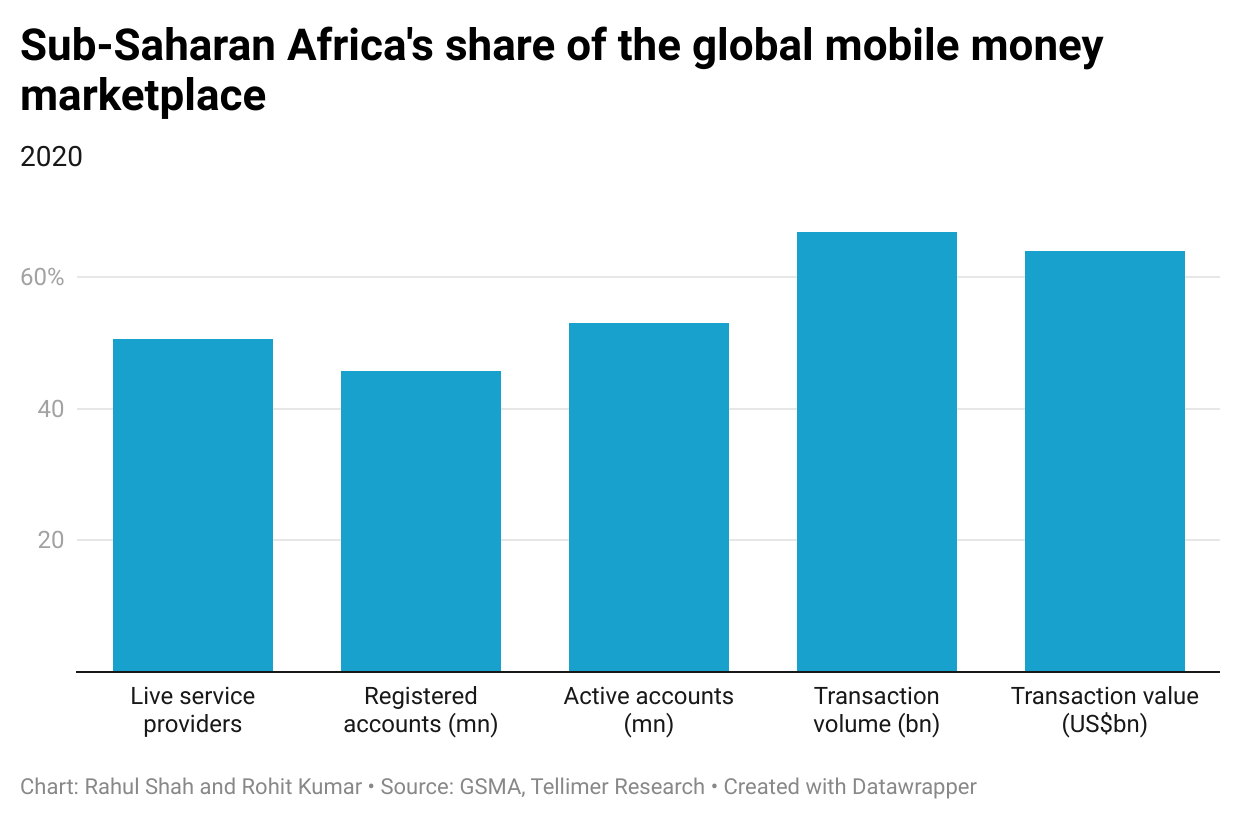 Within SSA, East Africa remains the most active region for mobile money. West Africa comes second and could grow significantly if Nigerian authorities grant long-awaited payment services bank licences to Airtel Africa and MTN Nigeria. Southern Africa has largely failed to embrace the product, perhaps due to the better access to formal banking products in this sub-region.

The three businesses addressed in this note have a combined mobile money customer base of 96mn (Safaricom 28.3mn, Airtel Africa 21.7mn, MTN Group 46.4mn). Each is, therefore, a key global player in this industry segment. All of them have significant growth potential, by attracting new customers but also by better embedding their mobile wallets into their customers’ lives via improved functionality and more use cases. Rising smartphone penetration is a further positive trend.

Safaricom shares are close to their all-time highs

Buoyed by recent news confirming its successful bid for an Ethiopian telco licence, and strong growth at M-Pesa, Safaricom’s shares have been hitting all-time highs. The company now accounts for 63% of the Nairobi All Share Index’s market capitalisation, almost doubling its weighting over the past five years, and is the most valuable African stock listing outside South Africa. 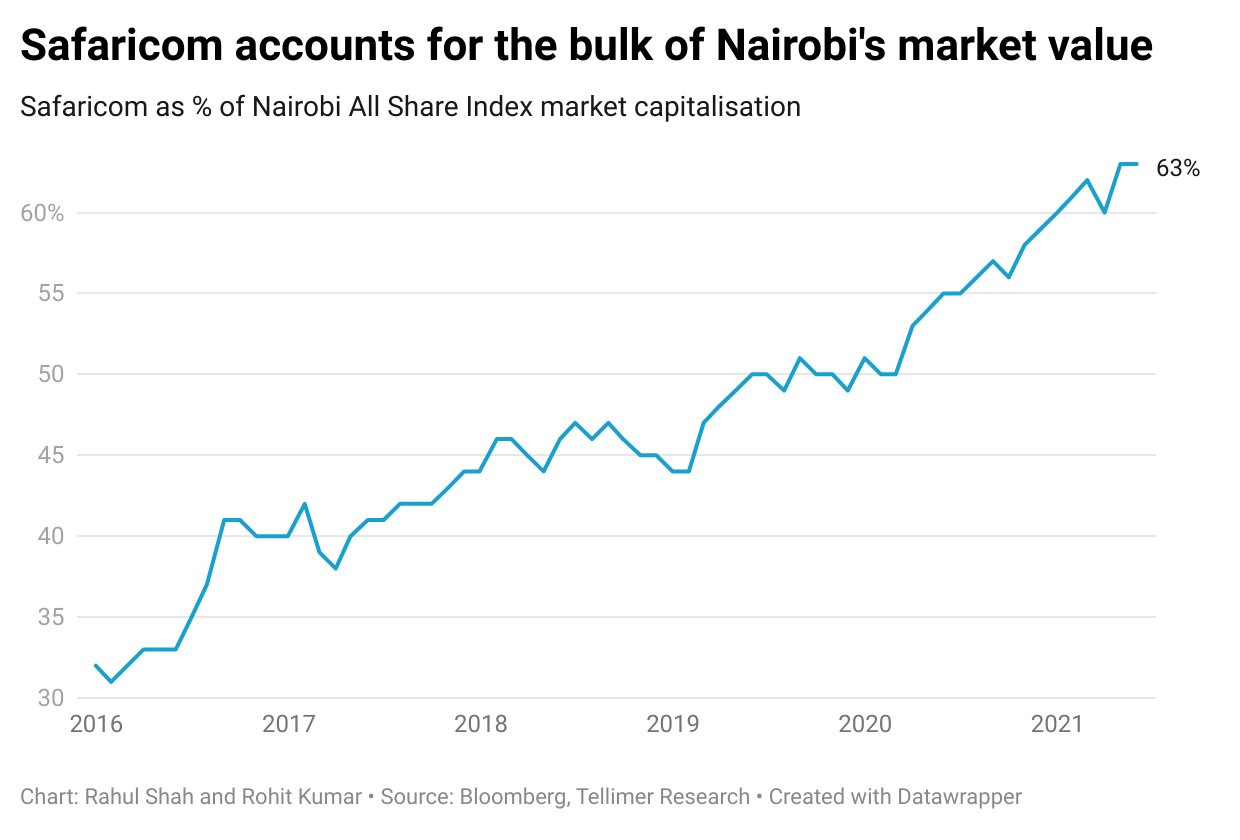 Other regional telcos trade at steep discounts to Safaricom

The positive aura surrounding Safaricom is also visible in the positive share price performance of other Sub-Saharan Africa (SSA) telcos. But these names are still trading at a significant discount to Safaricom. These disparities suggest there may be significant hidden value in SSA telcos, which also trade at large discounts to their Middle Eastern peers. 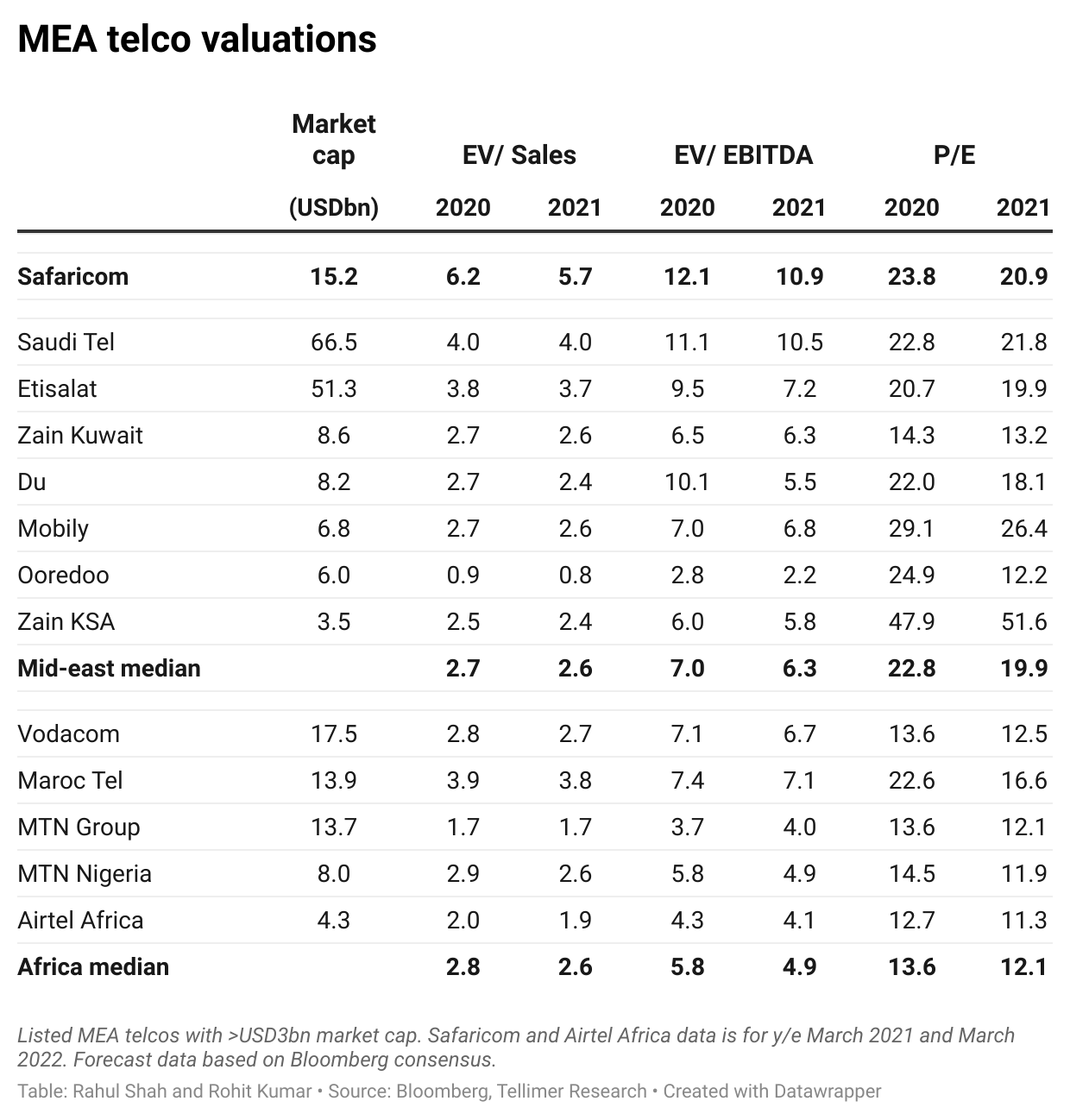 Given the importance of the M-Pesa mobile money platform to Safaricom’s performance (it contributed 31% of revenues in the most recent financial year), we focus our analysis on SSA telcos with sizeable mobile money operations, namely MTN Group and Airtel Africa. We have previously highlighted that both firms plan to separately list their mobile money arms, which could help to reduce any conglomerate discounts being applied by investors.

The disparity to Safaricom is currently huge. In the following table, we have applied the market-implied Safaricom telco multiples (4.5x EV/Sales and 8.7x EV/EBITDA for the year ended March 2021) to the telco businesses of MTN Group and Airtel Africa. When we do this, the implied valuation of these firms’ mobile money businesses is negative. One interpretation is that investors are not only getting MTN and Airtel Africa’s mobile money businesses for free but are also getting paid for the privilege! Given the strong long-term growth potential of these mobile money franchises, this does appear to be an overly conservative assessment by the market.

We repeat the exercise, but this time by applying the M-Pesa valuation multiples we apply in our Safaricom model (ie 10.0x EV/ Sales and 19.9x EV/ EBITDA for the year ended March 2021) to the mobile money arms of MTN Group and Airtel Africa. On this basis, the implied valuation multiples of both companies’ telco arms are less than half of the multiples at which regional peers are trading.

The conclusion reached is the same; the market’s assessment of the value of both franchises is extremely conservative (at least relative to Safaricom). 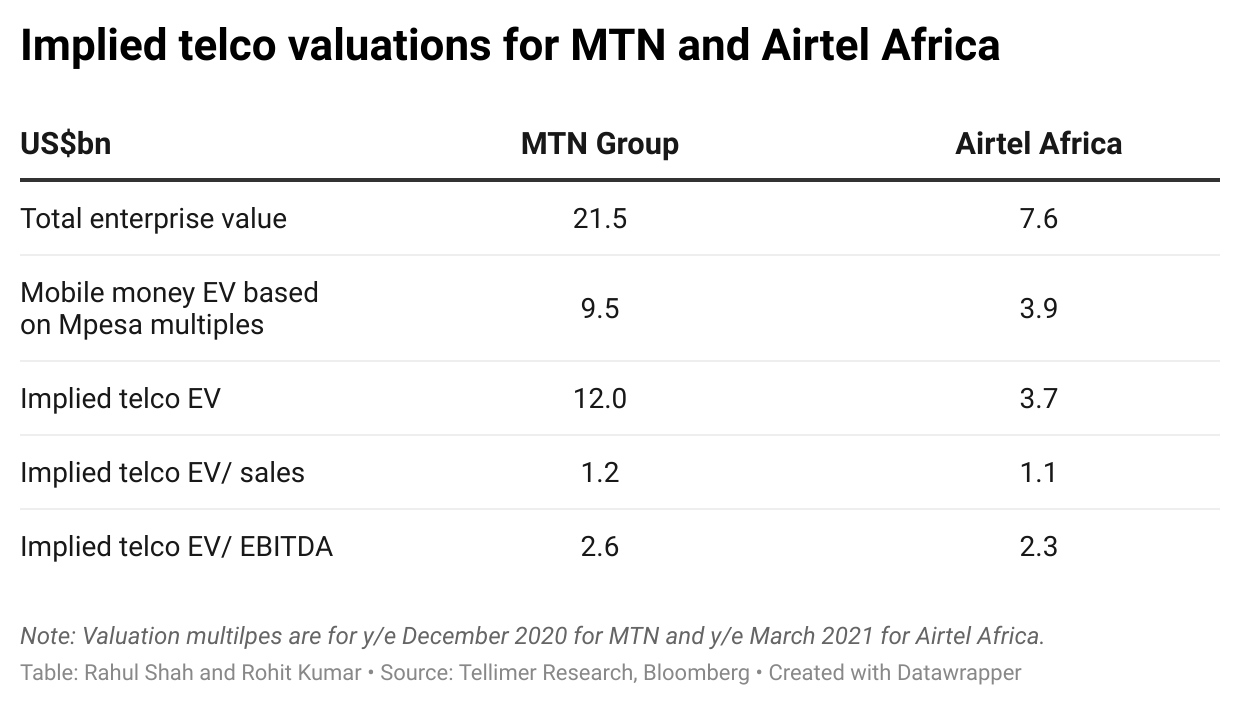 We accept that there are good reasons for both MTN Group and Airtel Africa to trade at a discount to Safaricom:

The key question is how large that discount should be. The above analysis suggests the current discounts to Safaricom are unreasonably large and points to a strong investment opportunity before the separate listings of their mobile money arms occur.

Safaricom in Ethiopia: Not as lucrative as the market believes