US$6,223.8 million surplus in October. This was significantly higher than consensus at +US$3,350 million, and to our US$1,954.2 million forecast. As has been for quite some time (except for the lockdowns in April and May), exports (2.9% y/y) are outpacing imports (-13.8%), as shown in Chart 1. Total trade in nominal terms (exports plus imports) was more modest in the annual comparison, at -5.5% after rebounding to -2.4% in September. Given these dynamics, exports accumulate a 12.6% decline year-to-date, while imports have fallen 18.8% (see Table 1). As expected, meteorological conditions impacted the oil sector, with shipments down 30.2% and purchases from abroad at -33.4%. The price of the Mexican oil mix averaged 36.46 US$/bbl, from 37.56 in the previous month, albeit higher in annual terms. On non-oil, we highlight that auto exports surged 12.8%, benefitted by a base effect (recalling that the sector was hit strongly last year due to the strike of GM workers in the US between September and October. In imports, consumption and intermediate goods remain dampened, at -31.0% and -7.8% respectively. Capital goods also backtracked, at -18.3%. With this, the trade balance accumulates a US$29.1 billion surplus in the last twelve months, once again a new historical high as it has maintained the upward trend started in early 2019 (Chart 2).

Imports slow down, signaling domestic weakness ahead. After a couple of months with a tentative revival, imports (+1.3% m/m) weakened relative to exports (4.8%), as shown in Table 2. In our view, this suggests renewed weakness in the domestic front.

Apart from the latter, we should also mention that there were several reports about bottlenecks when products arrive at Mexico’s customs due to new labeling regulations. Importantly, these started to apply also to intermediate goods’ imports since October 1st (except for those made by companies enrolled in special trade programs, such as IMMEX and PROSEC), in addition to consumption goods. Moreover, it should be recalled that customs’ administration was given to the Army and Navy since the beginning of September. In this sense, some logistics companies have stated that inspections have been holding back the flow of goods. In our view, these factors may have distorted the data, so it will be necessary to see if there is a correction in coming months to gauge how strong the signal may be in terms of economic dynamism.

The oil sector was mixed, with exports down 7.2% after plunging 15.4% in September, but with imports up 2.0%. We recall that the month was characterized by difficult meteorological conditions, with hurricane Delta entering the Yucatán Peninsula as Category 4 on October 6th and Zeta by the end of the month. According to press reports, Pemex stopped sending personnel to offshore locations in Ciudad del Carmen, Campeche, since the beginning of the period, affecting the former the most. In this respect, crude-oil shipments abroad fell 5.8%, while other products plunged 12.2%. Within imports, consumption goods fell marginally (-0.3%) although intermediate goods accelerated to 3.2% from 1.6% in the previous month.

In non-oil, exports surprised positively, gathering additional pace at 5.3% after growing 1.6% in September and adding five consecutive months in positive territory. As expected, agricultural goods fell at the margin. Nevertheless, we highlight that mining surged 55.4% and manufacturing strengthened 4.8%. Within the latter, positive results were broad-based, although we highlight autos (9.6%). On the contrary, imports moderated to 1.2%. The only category up was intermediate goods (1.9%), in turn related to manufacturing. In our view, this reinforces the possibility of distortions in the data due to issues at customs. Meanwhile, consumption goods contracted 2.7% and capital goods declined 1.2%, with both negative for the first time since May.

Despite potential data distortions, the report signals a domestic slowdown at the start of 4Q20. In our view, these figures suggest a moderation in the pace of the domestic recovery. We recognize some temporary effects (e.g. such as those related to the weather affecting mainly oil mining) which could reverse soon, along potential distortions as mentioned above. Nevertheless, we stress the deep contrast between exports and imports, resulting once again in a historical surplus. Specifically, manufacturing exports keep surprising positively, both in autos and others; meanwhile, non-oil consumption and capital goods imports, related to domestic demand dynamics, suggest renewed weakness. In this sense, manufacturing in the US remains strong, which is likely supporting the former. For example, November’s PMI increased to 56.7pts, with new orders growing at their fastest pace in two years and a half. Survey respondents said these were mainly domestic, albeit with export-related ones picking up marginally.

Optimism in this country was mainly driven by lower electoral uncertainty and hopes of a vaccine against COVID-19. In our view, these could also be favorable for local industry, more so if they incentivize higher capital spending. Nevertheless, the latter have not shown convincing signals of accelerating. In this context, we will heed the second package of investment projects with the private sector, expected to be unveiled next week, after the plan of $297.3 billion (about 1.2% of GDP) announced at the beginning of October.

On the contrary, we warn of short-term factors that could complicate matters further. Among them, and as said in other documents, epidemiological conditions in our country have deteriorated since the end of October. This could result in new supply-chain disruptions –although, if this were the case, probably more focalized–, potentially worsening as winter approaches. The lack of fiscal stimulus in the US could affect demand from that country, with the latest news pointing that it will be very difficult to achieve after Biden’s win and even extending to next year. Apart from this, we highlight also that railway blockades in Michoacán remain in place since October 1st, impacting the flow of goods mainly in the port of Lázaro Cárdenas. This has resulted in additional bottlenecks affecting several industries (e.g. mining, autos, steel, etc.). According to CONCAMIN, costs associated to these interruptions are estimated at about $800 million on a daily basis. 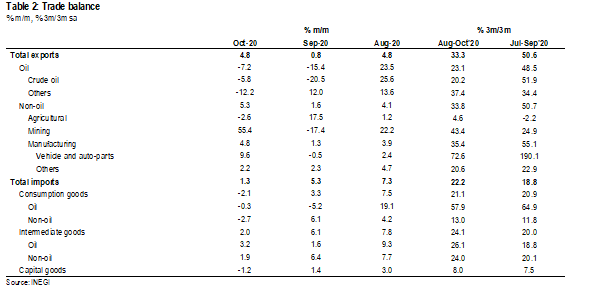