The Mexican administration has passed legislation seeking to increase the role of state electricity company Federal Electricity Commission (Comisión Federal de Electricidad: CFE) in Mexico’s electricity sector and to reduce the participation of private wind and solar energy providers. Mexico now unlikely to meet its 2024 clean energy targets under the Paris Agreement. This report examines the implications for private companies operating in the sector and the impact on Mexico’s clean energy production.

On 9 March 2021, after approvals were fast-tracked in the lower chamber and Senate, modifications to Mexico’s LIE were signed into law. These primarily seek to give priority status to CFE in supplying the national grid in preference over supply from private projects. The changes represent the most far-reaching of several attempts by the current administration to restrict operations of private wind and solar energy providers in Mexico since 2018.

Key modifications to the LIE include giving all CFE electricity generation projects priority to supply the national grid ahead of private projects, including renewables; subjecting the granting of electricity generation permits to the Ministry of Energy’s (Secretaría de Energía: SENER) planning criteria; and allowing the revision of contracts and permits for their “legality and profitability for the federal government” and for evidence of fraud. Through these measures, the government is seeking to rectify what it perceives as unfair terms benefiting the private sector under the country’s 2013 energy reform that opened up the sector to greater competition. The 2021 amendments state that the LIE granted “great privileges to private generation, which place CFE at a serious disadvantage”. Mexican President Andrés Manuel López Obrador (AMLO) has argued that the new measures were needed to restore CFE to its rightful place and remove what he considers unfair advantages for the private sector, obtained by corruption.

The changes have been strongly opposed by main opposition parties Citizens’ Movement (Movimiento Ciudadano: MC), National Action Party (Partido Acción Nacional: PAN), Party of the Democratic Revolution (Partido de la Revolución Democrática: PRD), and Institutional Revolutionary Party (Partido Revolucionario Institucional: PRI). They claim that the changes will prevent free competition in the electricity sector, deter investment, increase pollution, and raise electricity costs for consumers. Multiple private-sector associations, including the Business Co-ordination Council (Consejo Coordinador Empresarial: CCE), Employers Confederation of the Mexican Republic, and Federal Economic Competition Commission, and international associations, including the US Chamber of Commerce and the International Chamber of Commerce, have raised similar concerns, arguing that the alleged loss of free competition in the electricity sector through the restoration of effective monopoly status for CFE will disincentivise foreign investment in Mexico beyond the energy sector and violate the terms of the US-Mexico-Canada free-trade agreement (USMCA FTA).

The new measures significantly increase the risk of renegotiation of electricity contracts signed between CFE and private generators to improve terms for the government, potentially reducing margins for the companies affected. Contract revision risks were already high, after AMLO announced in June 2020 plans to investigate renewable contracts considered fraudulent: the recent modifications now contain specific provisions for this. The president announced on 3 March, without giving details, that he will seek contract renegotiations with Spanish firm Iberdrola and 10 others under the new LIE framework. Contract cancellation for projects already in operation is less likely, with the government prioritising negotiation of more favourable terms as achieved with the renegotiation of seven privately owned gas pipeline projects in 2019 in favour of CFE.

LIE modifications also raise the risk of permits to renewable energy developers being restricted as a result of SENER being granted the ability to subject permits to its own planning criteria and becoming dependent on the availability of transmission capacity. SENER is likely to seek to prioritise CFE’s own power generation expansion within its planning criteria, as it attempted to do in its, now suspended, May 2020 reliability policy. Reduced permits for private companies would be likely to disproportionately affect wind and solar providers, which in 2020 reached nearly 14 GW of total installed capacity in the country, versus 2.8 GW in 2015.

In addition to their direct impact on the energy sector, the reforms are likely to imply higher overall electricity costs in Mexico as CFE-generated electricity is estimated to be 27% more expensive than privately generated electricity on average, according to private-sector association CCE estimates. If the higher electricity cost is not offset by government subsidies, it could have a heavy impact on other industries, increasing production costs for those with high electricity consumption such as automotive manufacturing and mining.

Although the LIE modifications have been ratified, the extent of their future implementation is more uncertain. Under the new legislation, the government only has six months to amend a significant volume of associated legal instruments. In addition, ongoing legal challenges are highly likely through the Mexican Supreme Court and international arbitration under the USMCA FTA. In February 2021, the Supreme Court annulled previous SENER policies strengthening CFE’s role on the grounds that the policies hindered economic competition.

As of mid-March, two judges in local courts have already issued provisional suspensions of the LIE amendments following legal complaints submitted by 13 private companies, ruling that the measures constitute barriers to free competition. A group of 48 opposition senators (from the MC, PAN, PRI, and PRD parties) are also preparing a constitutional challenge to be presented before the Supreme Court within 30 days. The lower house’s Centre of Economic Studies of Public Finance has warned that at least 28 foreign companies investing in 57 electricity generation projects could raise international legal challenges against LIE measures, which the centre claims will affect USD8.9 billion in investments and 9,525 MW of clean energy. Industrial association Chamber of the Transformation Industry of Nuevo León has said that “hundreds” of firms in the state of Nuevo León have requested more information about pursuing legal action. These legal challenges are likely to delay implementation of the most controversial changes, particularly those relating to contract revisions for projects already in operation.

Regardless of the outcome of these pending legal challenges, it is highly likely that the AMLO administration will pursue its overall aims of increasing CFE’s participation in the electricity sector and restricting renewable energy operation for the remainder of its term (to the end of 2024). These aims form part of the administration’s central “Fourth Transformation” agenda, through which it is seeking to reduce corrupt practices allegedly undertaken by previous governments, including what it considers “abusive” contract terms in the energy sector. AMLO has shown consistently strong commitment to these aims in 2020, prioritising a more austere and centralised federal government and anti-corruption measures above other national concerns, such as containing the coronavirus disease 2019 (COVID-19)-virus pandemic and insecurity. His administration considers renewable energy providers to be in direct competition with CFE in supplying the national grid and has called renewable energy expensive and unreliable.

If the LIE measures are blocked or amended, AMLO would be highly likely to continue to pursue a stronger position for CFE by imposing restrictions on renewables by other means, including increased regulation, higher fees for interconnection or intermittency, and opening individual investigations into contracts from previous administrations considered to be “fraudulent”. If the ruling National Regeneration Movement (Movimiento Regeneración Nacional: MORENA) party retains its lower house majority in the June 2021 mid-term legislative election, a bolder approach towards pursuing a state-led focus in the electricity sector would also be incentivised.

The current administration’s approach towards limiting private renewable energy generation has been consistent since it took power in December 2018, when it cancelled planned bidding rounds for renewable projects. In April 2020, it attempted to suspend all pre-operational testing for wind and solar projects and reject applications for new interconnection applications for renewables. Additionally, CFE head Manuel Bartlett claimed in January 2021 that an electricity blackout on 28 December affecting 10.5 million people was due to “excessive permits” granted to renewable providers under the previous administration, adding that electricity system operator the National Energy Control Centre (Centro Nacional de Control de Energía: CENACE) would “remove part of the intermittent renewable energy” from the grid to increase supply reliability.

Wind and solar additions are expected to decelerate after 2021, given the uncertainties in regulation and transmission expansion. Since 2016, of the 11 GW of wind and solar projects added to the system, 6 GW were awarded in long-term auctions with CFE as the main offtaker. That mechanism is now suspended indefinitely. Renewable capacity additions will still be sizeable in 2021, with 2 GW already under construction, but permit activity by the Energy Regulatory Commission (Comisión Reguladora de Energía: CRE) and system operator CENACE shows that new builds will decrease from 2022 for two to three years. The recent investment slowdown stems partially from the COVID-19-virus-related lockdown, but is largely in response to regulatory uncertainty, a tougher process for new permits, and the lack of transmission capacity expansion.

In turn, fewer investments in renewable energy projects will hinder Mexico from achieving its clean energy targets. The country’s Energy Transition Law mandates that 35% of total electricity generation should come from clean sources by 2024. When the law was issued in 2015, clean energy accounted for about 20% of the total. By 2020, the percentage rose to 27%, driven by the increase in wind and solar penetration. However, the ongoing policy trends indicate that Mexico will fall short of its target. As other clean energy sources such as hydro, nuclear, or geothermal are not expected to develop significantly, IHS Markit estimates that by 2024 clean energy output will satisfy around 30% of total demand. The government’s lack of support for clean energy generation and adherence to international agreements in this area is also likely to affect Mexico’s attractiveness for international investors in other sectors, for whom sustainability is becoming an increasingly important factor for investment.

One positive factor in Mexico’s challenging renewable energy context has been a significant increase in the development of projects driven by corporate power-purchase agreements. This mechanism, further removed from the government and bringing together private generators and private consumers, remains a driver for renewable additions. 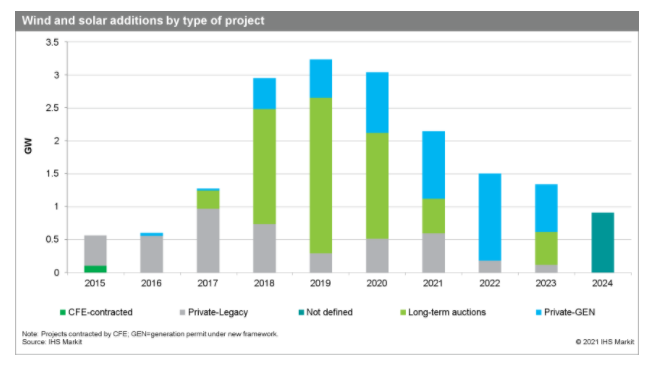