Banxico minutes remain hawkish. In our opinion, the document contains very important details about each Governing Board member views and their possible decisions ahead. In general, we believe decisions will continue to be determined by two factors: (1) The Fed’s tightening cycle in the US; and (2) local inflationary conditions, as well as expectations in the short-, medium-, and long-term. As a result, the debate remains focused on what should be the best monetary policy response to this situation. We identify at least three main views. The first, those who see a clear need to maintain the same pace of 75bps (which we think are Irene Espinosa and Jonathan Heath); the second, those who show less conviction about whether to continue at this rhythm, although clearly leaving it as a possibility (Victoria Rodríguez and Galia Borja); and the third, which argues for a possible reduction in the pace relative to the US (Gerardo Esquivel) to avoid the risk of excessive tightening. Another important discussion focused on the ex-ante real interest rate. We noticed greater agreement that it must reach restrictive territory. However, it is less clear to what extent. Lastly, and based on the entire document, we believe there is strong consensus on continuing the hiking cycle. Although there are some divergences on the most convenience pace –and when an eventual inflection point could be reached– we see clear conditions in favor of +75bps on the August 11th decision. After this, we anticipate +50bps in September, November, and December, so the reference rate would reach 10.00% at the end of the year.

Members’ comments suggest that prudence will keep driving decisions. Unlike the last minutes, in this occasion we did not have much information to differentiate the individual opinions of each member. Nevertheless, comments were very consistent with their recent participations, making them easier to identify. After our evaluation, we remain very attentive to the views of Governor Rodríguez and Deputy Governor Borja, considering that we still see them as the marginal voters. It is our take that both maintain a hawkish tone, which will lead them to support at least one more 75bps hike due to a challenging backdrop in terms of the monetary stance, inflation, and its expectations. Up next, we present a table with our assessment of each member comments: 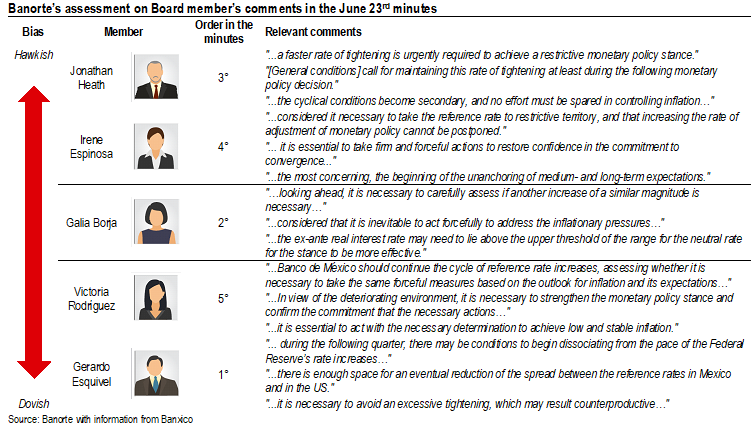 Debate on the upcoming decision and the hiking pace towards the end of the year. On the next policy decisions, we highlight opinions about: (1) The best pace to follow; (2) the adequate level of the ex-ante real interest rate, given current conditions; and (3) the need to follow the Fed’s moves. On the first two, we attribute to Jonathan Heath the view that an additional 75bps hike will be necessary given the likelihood of a new upward revision to inflation estimates   –remembering that this has been a constant thing as of late. According to our calculations, this would be enough to reach restrictive territory, close to 3.6% (with the upper bound of the neutrality range estimated by the central bank at 3.4%). In this same line, Irene Espinosa considers that it is “…necessary to take the reference rate to restrictive territory…”, even remarking that “…increasing the rate of adjustment of monetary policy cannot be postponed…”. Meanwhile, we think Galia Borja’s stance points to the need of carefully evaluating overall conditions before determining if the magnitude of the next decision will be the same. From Esquivel, we highlight that, in his opinion “…it is necessary to avoid an excessive tightening, which may result counterproductive…”. However, we did not identify a specific statement on the next decision and its likely magnitude. Regarding Victoria Rodríguez, she also considered to first evaluate if it will be necessary to have a 75bps hike again. In this sense, her opinion seems similar to the one from Borja.

Finally, and based on the document, we did not identify anyone supporting hikes of a larger magnitude ahead (e.g. 100bps).

On the ex-ante real rate, four Board members recognized that it should stand in restrictive territory. Nevertheless, they differ on its forcefulness, ranging from a stance of “may need” to “consider it necessary”. Lastly, regarding the third point, most thought it necessary to maintain the hiking cycle in tandem with the Fed. In this point, we highlight that Esquivel mentioned the possibility of decoupling from said central bank as soon as in 3Q22, concerned over the possibility of excessive tightening.

The tightening cycle will continue, with the rate closing this year at 10.00%... We believe the document is clear in signaling more hikes. Nevertheless, there is higher uncertainty in two fronts: (1) The pace in coming decisions; and (2) the terminal level of the cycle. Regarding the former, and after incorporating our Fed forecast –anticipating +75bps this month–, as well as our inflation trajectory, the decision seems clearly aligned for a hike of the same magnitude. More so, we believe the lower bound for adjustments remains tied to the ones carried out by the US monetary authority, at least from four of the five members. This has the goal of achieving orderly market and exchange rate adjustments, especially in a high volatility environment. On the second, our view for headline inflation is that the highest annual rate in the year will be in August (reaching close to 8.3%), albeit not breaching the 8% level to the downside until 2023. More importantly, the core would accelerate further until November, affecting the decisions for the remainder of 2022. Based on this and its implications for Banxico’s upcoming revisions of inflation estimates, we believe the terminal rate will be higher than analysts’ consensus (close to 9.50%). This is because of higher inflation that has an adverse effect on the level of the ex-ante real rate (assuming other variables remain constant). As such, considering a more modest hiking pace from the Fed in 4Q22, we expect +50bps in September, November, and December. With this, the reference rate would reach 10.00% by the end of the year, which is also our estimate for this cycle’s terminal rate.

...and with cuts towards the end of 2023. We expect the latter level will be kept most of next year, particularly given that, based on our estimates, headline inflation will below 5% y/y until August. In addition, we estimate that the Mexican economy will show negative sequential GDP growth in 2Q23 and 3Q23. This would help Banxico to take a less restrictive stance. As such, we believe the best moment to start the reduction would be in September’s meeting (still waiting for the release of the official calendar in the 3Q22 Quarterly Report), with a   -50bps adjustment. We then would expect two more cuts of the same magnitude for the reference rate to reach 8.50% by the end of said year.

The market remains firm about another 75bps hike in August. Following the release, local rates posted modest changes, diluting the session's slight gains. Short-term Mbonos adjusted from -3bps to +2bps, while longer maturities moved from -3bps to +3bps. The TIIE-28 IRS curve steepened slightly with pressures at the long-end of 3bps and the short-end virtually unchanged. In our view, the market is convinced –as we are– that the central bank's next move will be a +75bps hike. This would bring the benchmark rate to 8.50%, exceeding the terminal rate of the previous restrictive cycle (8.25%). Moreover, the curve prices-in an accumulated increases of +215bps for the rest of the year, finishing with a terminal rate around 10.00%, in line with our call. Looking ahead, we expect a further flattening of the nominal yield curve. On one hand, short-term rates will remain exposed to bouts of volatility and additional pressures as the monetary normalization continues, with a complex inflationary backdrop in which we do not rule out new negative surprises. On the other, long-term rates may be supported by an accelerated pace of rate hikes and Banxico’s credibility, starting to contribute to lower long-term inflation expectations. In this backdrop, we hold our view of more relative value in long-term bonds, favoring longs above 9.00% in the 30-year reference, Mbono Jul’53. We also like tenors Nov’38, Nov’42, and Nov’47 after the adjustment in 2Q22, albeit to a lesser extent.

In FX, the USD moderated recent gains after reaching a new high since 2002 yesterday, with the DXY adjusting -0.1%. The Mexican peso moved from 20.56 to 20.65 per dollar as an initial reaction to the minutes. It subsequently stabilized around 20.60, appreciating 0.4%. The currency closed the 1H22 with a 2.0% gain against the dollar, separating itself from the rest of the EM currencies. However, it started July on the downside, accumulating a depreciation of 2.3% so far in the month, wiping out gains in the first half. In our view, the dollar’s structural strength will continue in a risk aversion environment and with the Fed determined to curb inflation. Meanwhile, the peso would depreciate gradually, albeit with Banxico's high interest rate and ample spread against other central banks still providing some support. We see USD/MXN longs attractive below 20.00 per dollar.