US$198.7 million surplus in March, with a heavy influence from oil prices. This was above consensus, and further away from our estimate. Exports and imports grew 20.9% and 12.7% y/y, respectively (Chart 1), lower than in the previous month. In this sense, we note that this was influenced by base effects as this is the first period in which pandemic distortions ‘fade out’ more sizably. On the other hand, oil-related categories kept boosting results, recalling that Russia’s military invasion of Ukraine began on February 24th, inducing a very strong increase in oil prices, among other commodities. Details are in Table 1. With this, the trade balance accumulated a US$14.8 billion deficit in the last twelve months, with oil at -US$24.0 billion and non-oil at +US$9.2 billion (see Chart 2).

Crude oil prices surged globally due to the war between Russia and Ukraine. In this respect, the average price of the Mexican oil mix reached 104.42 US$/bbl (74% y/y) from 86.39 US$/bbl in the previous month. Meanwhile, US gasoline according to front-month futures went from about 2.69 to 3.29 US$/gallon in the same period. Volume data suggested a slowdown, with President López Obrador stating that Mexico’s shipped volumes of oil-related products fell, without providing details. We also had some evidence in this direction regarding gasoline purchases, despite higher mobility. In this sense, crude oil exports increased by 15.7% and ‘others’ 12.8%. In imports, consumption goods –where gasoline purchases are accounted for– were at +33.7%, while intermediate goods were more modest at +9.3%.

In non-oil, sequential results were more mixed. On the positive side, agricultural exports accelerated to 1.3%, likely also benefitted by higher prices. Moreover, the US ban on avocadoes from Mexico was lifted and the weather was relatively favorable. Non-oil mining contracted 13.9%, although not concerning given 26.7% growth in February. In manufacturing, autos contracted 8.7%, also impacted by a very challenging base effect (previous: 34.6%), with non-auto less negative, at -1.5%. In imports, we highlight that intermediate goods fell (-1.7%), also with a challenging base effect. Meanwhile, consumption goods rose 2.5%, adding seven months higher. As such, these categories do not seem to have been impacted yet by the rise in COVID-19 cases in China –with closures in Shenzhen since mid-March– and sanctions to Russia disrupting trade flows. Lastly, capital goods rose 5.3%, positive considering higher global uncertainty which was coupled with a significant MXN depreciation (at least in the first half) due to rising geopolitical tensions.

Trade flows poised to moderate despite resilient external demand. In recent reports, we have been talking about heightened risks for trade flows, mainly stemming from global drivers. Among them, the conflict in Ukraine and additional COVID-19 disruptions in China stand out. Considering these factors, among others, the World Trade Organization slashed its global forecast for global trade this year a couple of weeks ago to 3.0% from 4.7% in 2022, while seeing growth of 3.4% for 2023. On the former, they also warned about a potential food crisis stemming from surging prices, with both Russia and Ukraine being key exporters of grains and fertilizers, as well as other commodities. Regarding the latter, supply chain problems have exacerbated due to the strict COVID-zero policy in China, especially in maritime transportation. The lockdowns in the port of Shanghai have already extended to other ports, while strict confinements in Beijing may worsen the situation. In addition, higher prices are more concerning because they could lead to demand destruction. These issues remain quite relevant despite companies looking to diversify supplies as well as other measures to address ongoing shortages, albeit with their effect looking to stay limited. In this backdrop, global logistics and shipping company Maersk has stated that wait-times remain very high in the US West Coast (especially in Long Beach), while the effect of COVID-19 in China has been seen clearly in further delays in Hong Kong, Yantiam, Shanghai and Ningbo, among the most important places.

Meanwhile, wait-times in Mexico’s ports remain at acceptable levels, according to the same company. Also locally, there were important disruptions in trade between the US and Mexico because of the order from Texas Governor, Greg Abbott, of inspecting all trucks crossing the border through his state (Tamaulipas, Nuevo León, Chihuahua, and Coahuila). This measure was in response to the plan of lifting immigration restrictions based on ‘Title 42’, which allows for the swift return of people back to Mexico when crossing illegally by land. Although these inspections were only in effect between April 6th and April 15th (with a deal reached between the Mexican states and Texas on the latter date), an analysis of The Perryman Group estimated losses of around US$9 billion in GDP for the US because of them, with commercial traffic dropping as much as 60% since the mandate was established.

Hence, both global and local factors suggest a more challenging environment for trade. Nevertheless, and on a more positive note, other available data points to more resiliency. Specifically, the US flash PMI manufacturing for April picked up to 59.7pts from 58.8pts in March, with overall growth at its strongest in seven months. This was driven by rising output and new orders, with a significant rebound in foreign client demand (of which a big share is likely from Mexico’s manufacturers). The latter grew at its fastest pace in almost a year. Considering this, trade flows may remain relatively strong, at least in the short-term. Nevertheless, we believe real growth is poised to decelerate significantly. In this sense, the PMI report also warns that prices in transportation, fuel, and materials kept rising strongly. Meanwhile, backlogs of work (due to supply restrictions) also increased steeply. 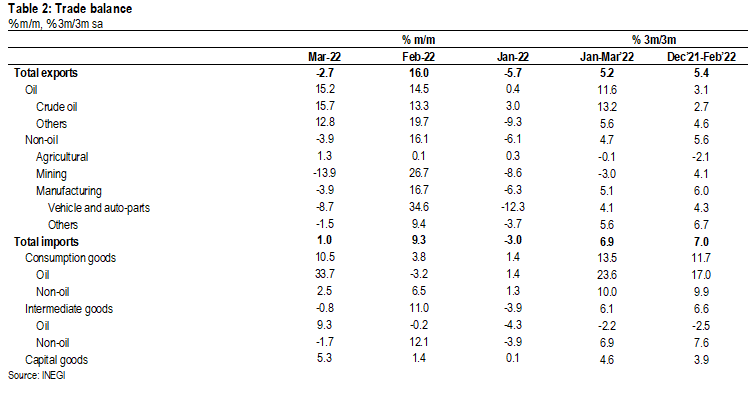