US$1,293.0 million surplus in February, matching seasonal trends. This was above consensus, but closer our US$701.6 million estimate. The period is typically positive as manufacturing accelerates while imports tend to decelerate as flows out of China dip given the celebration of the Lunar New Year. Exports and imports grew 27.8% and 34.2% y/y, respectively (Chart 1), aided to some extent by more benign base effects. Oil-related categories are still growing at a faster pace, helped by high prices. Details are presented in Table 1. With this, the trade balance accumulated a US$17.9 billion deficit in the last twelve months, with oil at -US$26.3 billion and a non-oil surplus of US$8.4 billion (see Chart 2).

Strong sequential performance, suggesting additional dynamism. Exports rose 16.0% m/m, with non-oil up 16.2% and oil higher by 13.9%. Meanwhile, imports expanded 9.1%, more than recovering losses from the previous month (see Table 2). These results suggest a rebound in trade after an impact from the Omicron wave, both here and abroad. However, we are still cautious about these figures as they are skewed to the upside given prevailing price increases. As such, the effect might be more modest on real data, which is still to be released, despite being consistent with other signs of an acceleration (e.g. US PMIs, IMEF indicators).

Within exports, we highlight that auto sector shipments rebounded with notable strength (34.7%), albeit still volatile considering uncertainty over semiconductor production and other logistical issues that have taken a toll on the sector in recent months (e.g. transport strikes in Canada, increasing costs, etc.). Meanwhile, other manufacturing exports rose 9.3%, more stable at the margin and likely still supported by robust demand from abroad.

Also relevant, agricultural outflows were practically unchanged (0.1%), impacted by the temporary suspension of avocado exports early in the month.

Oil increased 13.9%, in line with signals of higher volumes and prices, with the Mexican oil mix reaching 86.38 US$/bbl on average, better than the 77.85 US$/bbl in January. Here, after previous statements from the government on its intention to reduce shipments, later on it was stated that they will backtrack from this in order to take advantage of higher prices to boost fiscal revenues.

Within imports, and consistent with signs of higher output, intermediate goods surged 12.0%, setting up the table for a better short-term performance. Meanwhile, consumption goods added a sixth month to the upside (+6.2%). In our view, this keeps suggesting that domestic demand gathered pace –as seen in 4Q21 aggregate demand–.On the contrary, we believe some caution is needed as the price skew might be more evident in this sector. Capital goods were more modest at 0.6%. Oil purchases declined, helping explain the stronger surplus at the headline. Consumption led the fall (-4.5%) despite gains in mobility, although consistent with comments from the Federal Government of lower inflows.

Signs of additional dynamism, although with some headwinds due to the war in Ukraine and COVID-19. While today’s results were strong, we believe the overall effect on real figures might be more modest, considering that we have seen some disconnect between flows and total activity in the aftermath of the pandemic. As such, we believe activity in February and at least through the remainder of the quarter (see sections below) will be positive.

However, risks for the medium-term are on the rise. The two main challenges in the global front are: (1) The conflict in Ukraine; and (2) COVID-19. Regarding the former, we expect the main effects to come from the response of energy and other commodities prices, both due to the direct impact from the conflict along the sanctions levied against Russia to try to dissuade them out of the war. The increase in costs will likely dampen the recovery of some sectors even further, with tighter margins for producers and lower real incomes for families. On the second, Omicron cases surged throughout China in March, already triggering lockdowns in several hubs (such as Shenzhen) and ports. On the latter, the government announced the largest lockdown in nearly two years for the port-city of Shanghai for the next nine days. We expect this to have relevant implications on global trade flows and result in a deceleration in output in several sectors. In this context we must remember that around 20% of our country’s total imports in 2021 came from this country, so the distortions might be important.

On timelier signals, manufacturing in the US kept gathering pace in March, with the PMI climbing to 58.5pts. According to S&P Global, the increase was driven by higher output, new orders, and employment. However, backlogs and price pressures keep increasing, albeit also with higher inventories, which might provide some relief in the face of additional challenges. Domestically, some of signals are positive, but we have had some hiccups in the month. Specifically, truckers and other transportation sector workers went on strike on March 22nd and even blocked some highways to demand improved security, better conditions on costs (e.g. fuel and tolls) and some administrative relief.

While further stoppages were avoided as talks between the Ministry of the Interior and representatives got underway, we cannot rule out further worker actions to increase their leverage. In addition, stoppages in the auto sector continued. Just as an example, some plants in the state of Aguascalientes –including Nissan– had to halt activities for 14 days in the month, limiting output to just 48% of potential production. Moreover, further delays are expected for April, continuing to be a relevant headwind ahead.

All in all, while short-term conditions are still favorable, issues may start to build up in following months, limiting additional gains in terms of the global recovery and likely driving prices further up. As such, we believe the outlook for both activity and inflation are becoming more challenging, with a high degree of uncertainty about trends ahead. 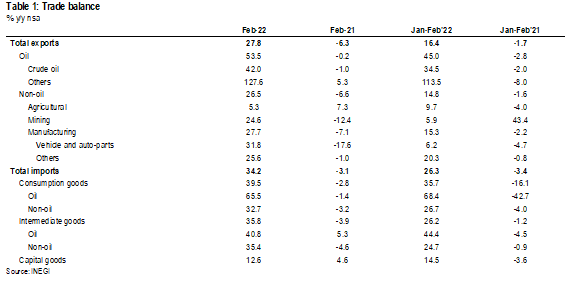 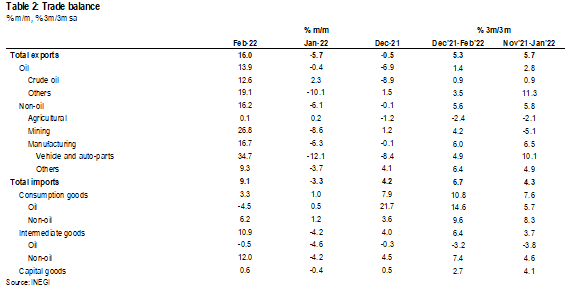