Mexico: Trade balance–Higher imports,still with no evidence of shocks from China

US$1,884.1 million deficit in April, with price distortions impacting figures again. This was below consensus, but closer to our estimate. Exports and imports grew 16.0% and 25.7% y/y, respectively (Chart 1), still high. We note results are still impacted by base effects, albeit each time less notorious as figures start to erase the main shocks after the pandemic. Meanwhile, elevated prices –mainly oil– keep driving figures up, suggesting more dynamism than what is ultimately seen in real data. Details are presented in Table 1. With this, the trade balance accumulated a US$18.0 billion deficit in the last twelve months, with oil at  -US$24.5 billion and non-oil at +US$6.6 billion (see Chart 2).

Crude oil prices remained high, albeit moderating at the margin. The average price of the Mexican oil mix reached 99.23 US$/bbl (+67.0% y/y) from 103.98 US$/bbl in the previous month. Meanwhile, US gasoline according to front-month futures went from about 3.30 to 3.26 US$/gallon in the same period. Volume data suggested a slowdown in shipments abroad, albeit moderating. However, implied data points to the contrary, as the Federal Government announced a halt of the plan to reduce crude exports. Meanwhile, gasoline volumes seem to have risen, pushed by higher mobility. In this sense, crude oil exports increased 13.6% while ‘others’ declined 7.9%. In imports, consumption goods –where gasoline purchases are accounted for– were at +4.0%, while intermediate goods were stronger at +28.4%.

In non-oil, sequential results were more mixed. On exports, agricultural goods were higher at +8.2%, likely driven by worse drought conditions in the US relative to Mexico. Non-oil mining fell 3.2%, adding two months lower despite high prices. In manufacturing, autos contracted 1.4%, likely still experiencing distortions related to inventory management as supply woes continue. Non-auto rebounded modestly at +0.5%, extending signals of higher resiliency within manufacturing. In imports, we highlight that intermediate goods rose 3.1%, while consumption goods were also positive at +1.6%, adding eight months higher. Lastly, capital goods accelerated to 7.8% despite volatility in the MXN. Overall, these results suggest the impact from lockdowns in China was still not evident, likely favoring domestic activity in the month. Nevertheless, price distortions, such as those from the war in Ukraine, do seem to have had an impact on nominal flow data.

Likely moderation in coming months, anticipating larger distortions from Chinese lockdowns. So far, it seems the effects from the new COVID-19 outbreak in the Asian nation have not been reflected. We believe this is because of: (1) Higher prices, boosting nominal figures; and (2) the delay between the moment an item is shipped and when its received, which under normal circumstances, tends to be between 20 to 30 days. Given that lockdowns gained further momentum in Shanghai towards the end of March and early April, the effect on flows to our country may materialize until May. In addition, disruptions are still coming from the war in Ukraine, maintaining high commodity prices given the scarcity triggered by the event, as well as related sanctions. We must note the impact of all of this is larger as the system was already operating under important shocks. In this sense, according to The Maritime Executive, a fifth of cargo ships worldwide are stuck in congested ports, with a fourth of them concentrated in China. Although this represents a slight improvement vs. previous weeks, hurdles for additional dynamism remain clear.

Nevertheless, not all effects are entirely bad for our country. According to Reuters, since the US ban of Russian crude imports, flows to the US from our and other Latin America countries have accelerated. This would be consistent with comments from Mexican government representatives that they would suspend the strategy to reduce crude exports to take advantage of higher prices in global markets. On the other hand, we will be looking into the effects of the international trade measures included in the Federal Government’s Plan Against Inflation. We must recall that one of the most important points was the announcement of the temporary elimination of tariffs to 26 goods –mainly food items– which came into effect in the second half of May. In addition, there are other administrative actions that would seek to reduce wait times in customs and 24-hour operations in ports. As such, although their effects may take a while to materialize, if they do so, they will likely be most notorious in non-oil consumption goods imports.

Locally, epidemiological conditions kept evolving in a favorable manner, which should provide support to labor intensive sectors. Nevertheless, we identify risks such as drought conditions, which have deteriorated as the year passes by. In addition, there are reports of bird flu outbreaks impacting chicken production.

If these continue with an unfavorable trend, agricultural goods exports might decelerate. However, as these problems are also affecting the US, price increases might partially offset for this.

Overall, trade conditions have become more challenging again, with uncertainty about when we could see a wider supply chain normalization. Although we expect exports to remain as an important part for the local recovery this year, consumption will have a larger participation relative to what we expected in early 2022. 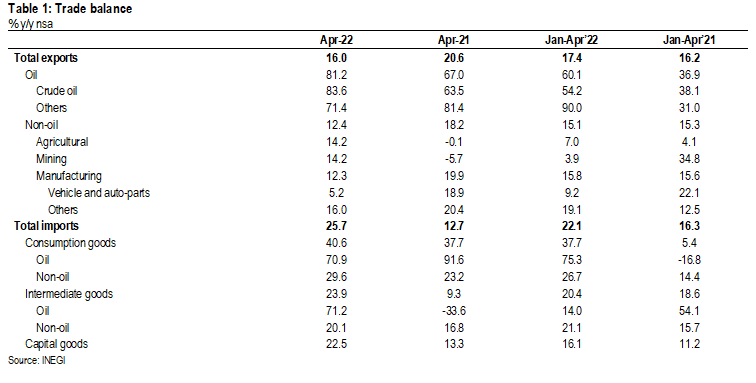 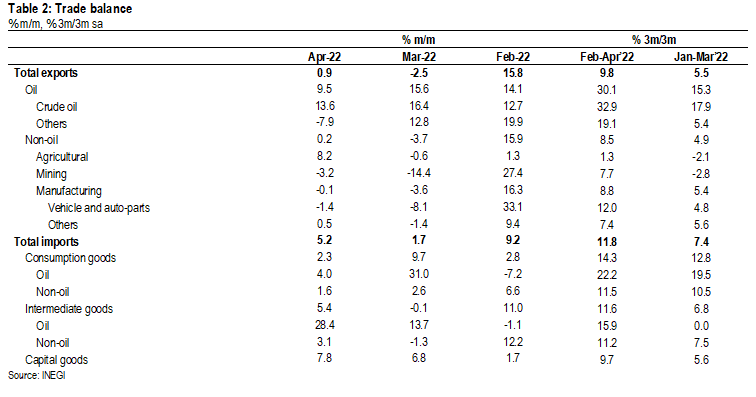