US$1,500.6 million surplus in April, above expectations. This was higher than consensus at -US$600.0 million, and closer –but lower than– our +US$2,457.2 million. We believe there was some payback from March’s surprise deficit, especially in imports. Annual rates surged in every category, with total exports up 75.6% y/y and imports at 48.4% (Chart 1). We should mention these metrics are heavily skewed upwards due to distortions from a very benign base effect. Specifically, it should be recalled that the most severe lockdowns due to the pandemic were in April and May 2020, bringing total economic to very low levels. Within the former, oil exports surged further, with crude oil at 172.6% y/y. In this sense, the Mexican oil mix averaged around 59.43 US$/bbl in the period, which was +378.2% y/y. Meanwhile, non-oil grew 73.1%, with manufacturing up 79.4%. Autos surged 379.4% as they were not considered essential in April and May last year, meaning that most factories were closed. ‘Others’ were also affected by the same factor, but not as much. Hence, these increased 34.8%. On imports, oil picked up 76.4% after the 104.7% of the previous month. Meanwhile, non-oil reached 46.1%. Inside, consumption goods led the increase (51.4%), followed by intermediate goods (47.9%). Lastly, capital goods stood at 26.8%, with three months in a row positive. Details are presented in Table 1. The trade balance accumulated a US$28,954.7 million surplus in the last twelve months, with a US$15,028.3 million deficit in the oil sector and a US$43,983.0 surplus in non-oil (see Chart 2).

Deceleration in monthly terms, with some payback from March’s strength. We will keep looking closely to sequential results in coming months given the abovementioned distortions in annual rates. In this respect, we observed a deceleration, with exports up barely 0.2% and imports contracting 8.1% (see Table 2). In our view, overall results were favorable despite of this, which we see more as ‘payback’ from very high growth in almost every category in March, particularly in the latter category. In this sense, most retracements were not enough to reverse gains in said period.

Specifically, non-oil shipments grew 0.3%, with a drag from both agriculture  (-5.4%) and mining (-22.9%), but relative strength in manufacturing (1.1%). Specifically, autos rebounded 7.4% after March’s -1.4%, breaking with two consecutive months on the downside. We believe this is quite positive considering several issues limiting production, highlighting the scarcity of semiconductors. Meanwhile, ‘others’ fell 1.8%, albeit only after growing 5.9% in the previous month. In contrast, agricultural accelerated its contraction, possibly because of the effects from droughts in several parts of the country –which has also been reflected in higher prices. In turn, imports declined 2.6%, with all categories lower. The most significant fall was in consumption (-6.6%) followed by capital goods (-4.4%), with these surprising up the most in March. On the other hand, intermediate goods contracted 1.9%, which in turn may be related to the scarcity of some raw materials for the production process, although also facing a very difficult base effect in sequential terms.

We expect trade to remain supported by external demand, despite continued risks to manufacturing. As already mentioned, we think results were favorable, with our view last month of signals of better domestic dynamism (e.g. in consumption and capital goods imports) still holding. Nevertheless, we need more data to assess if the underlying trend has improved given today’s sequential contraction in consumption and capital goods imports, leaving open the possibility that March was just an outlier. It is our take that a gradual domestic recovery is still in the cards, with a further revival expected on higher mobility levels (with a signal of this in oil imports, mainly gasoline), employment gains and high remittances, among others. Despite of this, we maintain there is a high likelihood that these keep underperforming categories more dependent on external demand. On the other hand, we warn that annual rates in May will probably be even above April, as exports and imports plunged 56.7% and 47.1% in the same period last year. Therefore, we will keep focusing on sequential rates to judge performance.

Although our base case is still positive, we should say that risks to manufacturing remain elevated, with reports that supply constraints may be increasingly binding. The most salient is the auto sector, affected by the lack of semiconductors, among other key raw materials. In this sense, some key players such as GM, Toyota and Honda had already announced intermittent production halts in Mexico due to this issue. Nevertheless, in recent days we had more companies in this situation. Among them: (1) Nissan closed its Aguascalientes plant at least one week in May; (2) Ford also stopped some operations for some days during the same month; and (3) VW announced technical stoppages at their plant in Puebla in June.

According to industry experts, the issue with semiconductors is still many months away to be resolved. Moreover, logistics’ managers have stated that other issues are limiting production growth, including very high traffic in maritime ports –especially in the US, with high queues in Los Angeles– and the lack of available containers –with many waiting in the US and not returned to exporting countries, such as China. These factors, combined with other issues – such as higher fuel costs– have in turned pushed freight costs up, also compounding on other effects across supply chains. While we have focused on the auto sector given its key role in our country, this will likely have an increasingly important impact across other manufacturing categories, including electronics and household appliances. We believe these issues could be starting to get reflected by more concise data, such as domestic PMI (IMEF) indices –especially in the production component.

Nevertheless, our optimism holds mainly on quite vigorous demand. In this sense, Markit’s manufacturing PMI for the US increased from 60.5pts in April to 61.5pts. Within the report, ‘new orders’ have started to build-up on shortages, with companies looking to stockpile amid material shortages and rising costs, resulting in new export orders rising at their fastest pace on record (since September 2014). Despite of this, producers fear shortages could extend through the end of 2021, while logistics’ issues have taken backlogs to their highest on record. On the other hand, we are also looking closely at recent disputes over possible violations of labor clauses within USMCA between the US and Mexico. Although a resolution on some of these cases is still some time apart, one of the possible sanctions includes the imposition of compensatory tariffs to make up for the violations.

On other sectors, recent droughts might keep dampening dynamism in agricultural exports. While price increases should help moderate the blow in terms of the overall balance (as it is in nominal terms), volumes will certainly take a toll as supply would adjust only gradually. In the oil sector, the Minatitlan refinery is still offline, which will probably lead to increased imports in coming months. Yesterday, Pemex announced that it will acquire Shell’s remaining 50% stake in their Deer Park refinery joint venture in Texas. According to the companies, this will cost the company around US$596 million. We believe this represents an effort by the Federal Government to fulfill the President’s wishes of achieving ‘energy independence’, aiming for Mexico to produce enough gasoline and diesel to fulfill the country’s demand.

On imports, non-oil intermediate goods could adjust further as companies deal with supply chain challenges in a backdrop of high demand. Despite of this, we expect good results to prevail. More importantly, we stay focused on consumption and capital goods, particularly as uncertainty could remain elevated and dampen performance. Regarding the latter, several companies have announced ambitious investment plans, which could help dynamism. Nevertheless, it is our take that some issues keep weighing on sentiment, probably limiting a stronger rebound. On consumption, the evolution of fundamentals –especially employment– will be key to determine the pace of advance.

Confidence figures suggests the recovery continues, with more substantial support depending on the progress of vaccination campaigns. In this context, the Health Ministry reports that 12 million people have been fully vaccinated, representing around 9.4% of the total population. Considering this, we see a better performance of domestic demand relative to our expectations at the beginning of the year, although those sectors depending more on abroad will keep exhibiting higher dynamism. 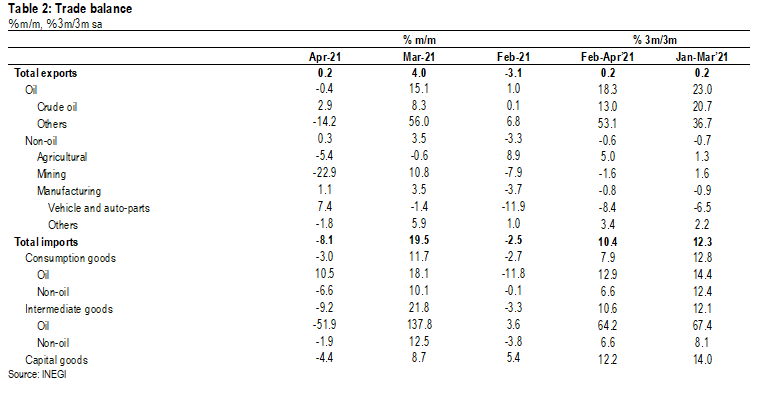