Mexico: Trade balance – Modest impact in May because of Chinese lockdowns

US$2,215.3 million deficit, adding two consecutive months with a negative balance. This was lower than consensus and our estimate. Exports and imports rose 22.4% and 29.1% y/y, respectively (Chart 1), continuing with the recovery trend. In our view, figures are showing healthy economic growth at the margin, although still quite high due to the additional boost from higher prices –as these figures are presented in nominal terms. High commodity prices prevailed, still a relevant driver for the oil sector balance. Details are presented in Table 1. With this, the trade balance accumulated a US$20.6 billion deficit in the last twelve months, with oil at -US$26.1 billion and non-oil at +US$5.5 billion (see Chart 2).

Favorable sequential figures, although with distortions from Chinese lockdowns within imports. Exports grew 0.9%, with two months higher. Inside, oil declined 5.1% and non-oil rose 1.5%. The contrary happened in imports (+0.4%), with oil at +7.8%, and non-oil lower by 0.7%, as seen in Table 2.

Regarding the oil sector, prices rebounded, albeit with substantially more speed for refined products relative to oil, which help explain some of the differences. The Mexican crude oil mix averaged 106.2 US$/bbl from 99.24 US$/bbl. Meanwhile, gasoline front-month futures went from about 3.25 to 3.76 US$/gallon in the same period. Similar to this, volumes suggested that inflows accelerated with more pace than outflows, although with an expansion in the latter. As such, the 5.1% contraction in exports comes somewhat as a surprise, especially the -5.6% in crude oil. In imports, strength centered in intermediate goods (+13.5%) –which bodes well for industry–, with consumption at +2.6%, consistent with an additional improvement in mobility and higher fuel sales domestically.

In non-oil, performance was also mixed. On exports, agricultural goods fell 0.3%, although quite modest considering the +8.3% from the previous month and still consistent with an environment of high prices amid drought conditions. Non-oil mining rocketed 10.8% after two months lower, consistent with support from prices. More importantly, manufacturing rose 1.4%, with strength in ‘others’ at +2.0%. Autos were relatively stable (-0.1%), still with some reports of supply disruptions as well as inventory management issues. However, strength from abroad seems to be key to drive all manufacturing. In imports, there seem to be some effects from Chinese lockdowns, albeit more modest than we originally thought. Specifically, intermediate goods fell 1.0%, with capital also lower at -1.5%. On the contrary, consumption goods rose 2.6%, anticipating a more upward bias from prices in this category. As such, we believe these results were better than expected, suggesting that dynamism might continue at a healthy pace through the remainder of 2Q22.

Likely pickup as some distortions dissipate, but still far from normal conditions. We believe today’s results support the recovery trend that started in the previous quarter and will even be slightly better than we originally anticipated. Specifically, we expected a more significant hit from Chinese lockdowns and other supply disruptions, which so far have been relatively modest, dissipating at the margin. For example, Chinese exports to Mexico in May (as reported by them) recovered to US$6.2 billion –which accounting for shipping and unloading times– should translate to a sequential recovery in June. This seems to have continued, with several logistics experts stating that backlogs kept declining in Shanghai and several ports across the country. This is consistent with a moderation in cases and more lax government restrictions. Despite of this, we believe supply chains remain under significant pressures, limiting the possibility of a more significant recovery and still affecting prices.

Related to the latter, the US manufacturing PMI decelerated sharply to 52.4pts in June. According to S&P Global, costumers paused purchases due to increasing prices and material shortages. In addition, new concerns about rising interest rates are also affecting producers. We believe some of this sentiment should translate to domestic conditions, anticipating an additional decline within IMEF’s index to be released this week.

We consider that the environment of high prices will continue in the short-term despite a moderation in recent weeks, in turn driven by heightened recession fears globally. Oil and some grains are likely to remain under pressure at least until the conflict in Ukraine and related sanctions continue. The effect of the latter is compounded by prevailing drought conditions across North America (mainly the US and Mexico), Europe, Eastern Africa, India, and South America, limiting overall production. We will also remain on the look about possible changes related to the Federal Government’s Plan Against Inflation. However, we still believe that its impact will be quite modest.

Considering this, risks to our forecast of a 0.3% q/q expansion in 2Q22 GDP is tilted to the upside. On the other hand, our call for a 2.1% expansion in full-year 2022 is still feasible, as some challenges towards the second half of the year seem to be brewing. 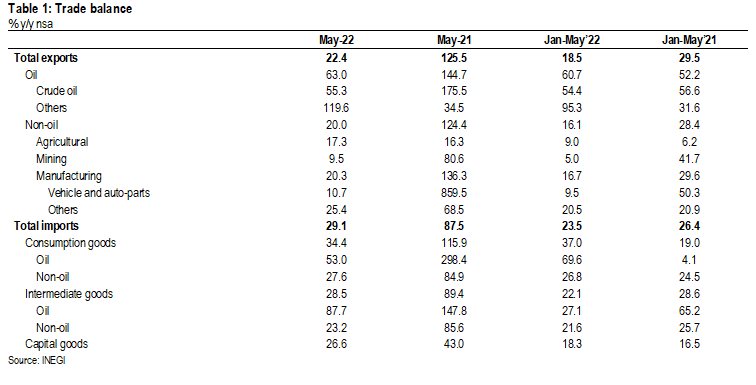 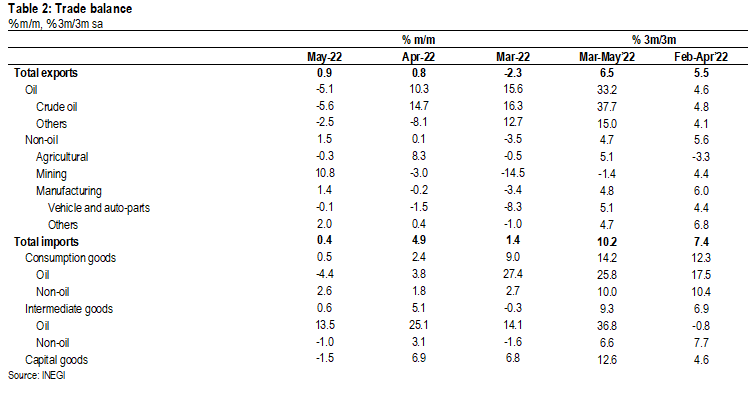