US$2,011.8 million deficit in October. This was practically in line with consensus, but higher than our estimate. Nevertheless, it is in deficit for a seventh month in a row. Exports and imports grew 17.7% and 14.8% y/y, respectively (Chart 1). Growth rates remained high, although decelerating once again at the margin, in our view due to the moderation in some commodity prices (e.g. energy, metals) and with shipping costs also to the downside. Despite of the latter, we cannot fully rule out that a part of these dynamics could also be because of efforts to constrain demand from central bank monetary tightening. For details, see Table 1. Hence, the trade balance accumulated a US$26.8 billion deficit in the last twelve months, with oil at -US$34.9 billion and a US$8.1 billion surplus in non-oil (see Chart 2).

Broad declines in exports and imports, suggesting some challenges at the start of 4Q22. Exports fell 4.2% m/m, erasing some of the gains of the previous month. Inside, oil declined 11.1% and non-oil stood at -3.7%. Imports had a more modest contraction of -2.4%, albeit adding four months lower. Oil was weaker at -17.7%, with non-oil practically flat at -0.1%, as seen in Table 2.

In the oil sector, prices recovered marginally. Thus, we attribute most of the results to changes in volumes. For context, the Mexican crude oil mix averaged US$81.18/bbl from US$80.35/bbl in September. Meanwhile, gasoline front-month futures went from about 2.45 to 2.71 US$/gallon in the same period. As such, volumes appear to have contracted, contrasting with early data from the US that showed higher shipments to said country, but consistent with lower purchases. The former is quite relevant considering that Mexico’s output has remained relatively stable. Nevertheless, on the latter, we believe that mobility in Mexico has stabilized at high levels, thus limiting the room for improvement.

Non-oil was mostly skewed to the downside. On exports (-3.7%), weakness centered in manufacturing (-4.3%). Inside, ‘others’ were lower at -5.0%, with autos dropping 2.9%. Signals out of the US were negative, both in soft (e.g. manufacturing PMI) and hard data (e.g. industrial production). In addition, the result in autos is consistent with AMIA’s figure (-2.3% m/m using our in-house seasonal adjustment model). On the contrary, agricultural goods climbed 4.7%  –with better climate conditions domestically–, while non-oil mining spiked 16.3% despite further declines in prices. In imports, activity could have been affected once more by lower transportation costs, while some supply constraints in China prevailing. Consistent with the latter, exports from said country to Mexico fell to US$6.1bn from US$7.0bn in September. Considering this, consumption goods fell 2.2%, failing to accelerate in absolute terms ahead of the holiday season. On the contrary, intermediate (0.1%) and capital goods (0.6%) were marginally higher, with the latter possibly benefiting from a stronger MXN.

Challenges for trade picking up, both from demand and supply. While price distortions continue skewing flows –this time to the downside–, we believe there are signs of a cooldown in trade. In our view, this could be a response to: (1) A moderation in demand, triggered by further monetary tightening from global central banks; and (2) ongoing supply distortions out of China as the COVID-zero policy continues to be implemented. In addition, shipping costs may be nearing their lower bound, limiting further advances. Consistent with this, the New York Fed’s Global Supply Chain Pressure Index stabilized at 1.0pts in October, halting a string of improvements since May.

Regarding the former, early results from Black Friday sales (this weekend) in the US look mixed. Online results were rather positive, but in-store sales likely declined. In general, reports indicate that spending might have been subdued due to accumulated inflationary pressures and recessionary fears. In Mexico, the outcome of El Buen Fin (which took place between November 18th to the 21st) was likely better, albeit with evidence that some of the spending corresponds to delayed outlays from consumers to take advantage of the discounts. Considering these results, exports could decelerate further in November. Local inventories might recover some group given the slight mismatch between sales and non-oil consumption goods imports.

On supply constraints, COVID-19 contagions in China have remained on the rise, which under COVID-zero policies, implies further lockdowns. One of the most notorious ones is in the city of Zhengzhou –where iPhones are manufactured, resulting in civil unrest among the population. The protests to end lockdowns measures peaked this weekend, albeit with no discernible impact yet on policy making and actions ahead. As such, China’s situation remains a big factor of uncertainty for global supply chains and a drag for key sectors domestically. Nevertheless, on a medium-term horizon, this could bolster even more nearshoring projects in our country.

Lastly, regarding USMCA, a decision on the issue of rules of origin in the auto sector panel is expected soon. According to Canada’s Trade Minister, Mary Ng, the outcome is “imminent”. While she did not speculate on the details, she stated that their standpoint is clear, in line with our view and contrasting with the one from the US. This was later supported by Mexico’s Deputy Minister for Foreign Trade in, stating that there is already a preliminary ruling, although also without mentioning anything about the result.

All in all, we believe that trade will likely decelerate in 4Q22 and further in 2023, in line with our overall view for economic activity. However, we remain on the look on the pace, considering some strength in the US labor market. Domestically, demand has been quite resilient, although with risks ahead and additional volatility in monthly data due to inventory and price adjustments. 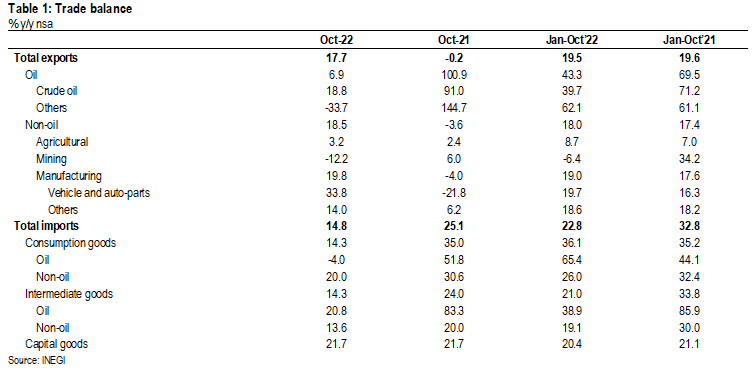 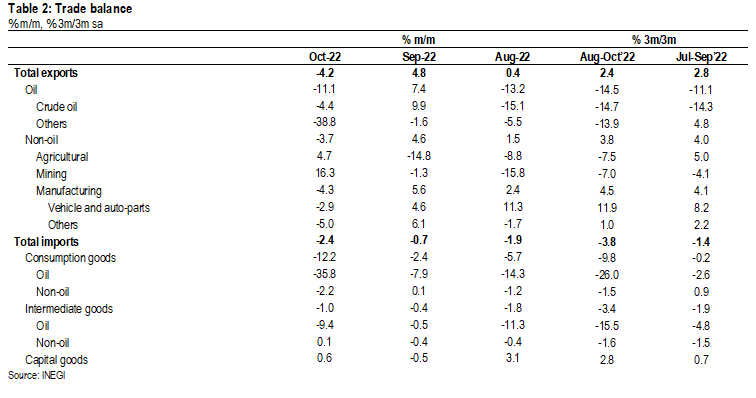