US$5,959.5 million deficit in July. This was below consensus and our estimate, showing a deficit for a fourth month in a row. Exports and imports grew 13.6% and 16.7% y/y, respectively (Chart 1). In our opinion, this was riven by some normalization in global transportation due to the relaxation of Chinese restrictions and the renewal of certain exports from Ukraine. Despite of this, data remains distorted by global inflationary pressures in annual terms (despite a sequential moderation in several categories). For details, see Table 1. Hence, the trade balance accumulated a US$27.2 billion deficit in the last twelve months, with oil at -US$31.1 billion and a US$3.8 billion surplus in non-oil (see Chart 2).

Regarding the oil sector, prices halted their upward trend, with a slight drop relative to the previous month. In this sense, the Mexican crude oil mix averaged US$95.65/bbl from US$110.03/bbl. Meanwhile, gasoline front-month futures went from about 3.99 to 3.34 US$/gallon in the period. In volumes, trends seem to have diverged, with signs of an improvement in shipments abroad, with the US remaining as the most relevant destination for our exports. On the contrary, inflows seem to have taken a hit on two factors: (1) A relevant increase in volumes received in the previous month; and (2) congestion in offloading terminals in our country, resulting in extended waiting times for ships carrying fuel to them. In our view, this helps explain the difference between the -6.1% fall in exports relative to the -6.9% in imports.

In non-oil, performance was mostly weaker. On exports (+0.2%), agricultural goods accelerated to +17.9%, consistent with drought conditions and higher prices. Non-oil mining rebounded 27.5% after a 24.1% contraction in the previous month, somewhat surprising considering an additional moderation in raw metals prices. Despite of these and more importantly, manufacturing fell 0.9%, with weakness in autos at -4.2%. This is consistent with AMIA export data, while possibly also related to a challenging base after the 4.0% expansion in the previous month. These swings lead us to believe that supply issues that have plagued the sector remain, despite moderating at the margin. ‘Others’ were resilient at +0.6%, adding four consecutive months higher. In imports, activity moderated despite more favorable signals for global trade. As such, intermediate goods fell 3.0%, not ruling out an effect from the decline in commodities prices. Consumption goods were slightly more stable at -0.2%, breaking with 10 months of expansion. Lastly, capital goods were unchanged (0.0%), positive considering an increase in uncertainty as global recession fears gathered traction in the month.

We believe the main risk for trade lies in the possible slowdown of US demand. The current backdrop of international trade –in terms of supply challenges– seems to be more favorable, with shorter waiting times on ports, some relief in energy prices, and a decrease in COVID-19 contagions. Nevertheless, new challenges both globally and domestically could slow down the recovery of exports, as well as increase the cost of imports –and once again affect local production chains–. At the international level, manufacturing activity in China contracted in July, a situation that could be deepened by two factors: the first is related to the heat wave that caused factories to shut down and energy rationing in provinces such as Sichuan; the second is due to higher tensions at the Taiwan strait, which, although has not generated an increase in maritime traffic at the moment, Chinese military drills could increase travel times required to sail through it. In Europe, ports are congested because of workers’ strikes in countries such as the United Kingdom, Germany, and the Netherlands. In addition, droughts have forced a reduction in shipping loads in various pluvial routes, which translates into longer delivery times. Back to the US, maritime transport conditions have improved (except for Houston and New York) while shipping prices have fallen. However, fears of a recession generate uncertainty about the dynamism of domestic demand in the second half of 2022. According to timely data, the S&P Global manufacturing PMI continued to fall to 51.3pts (previous: 52.2pts) its lowest level in over two years, impacted by lower demand and persistent problems in the production chains, according to the report.

Domestically, inflationary pressures continue and may keep limiting activity in the short-term, especially as the most pressured component continues to be food. According to our estimates, the peak of this inflationary cycle may occur in 3Q22. However, we believe that fundamentals will continue compensating for this drag in the rest of the year. Regarding mobility and COVID-19 contagions, we will keep an eye on its trajectory. According to Deputy Minister of Health, Hugo López Gatell, we could have a new wave towards the last quarter of the year.

In this backdrop, we believe the balance of risks for the rest of the year has become more negative, with fears of a recession in the US gaining strength, China’s economy pointing to a slowdown and no clear end in sight for the war in Ukraine in the short term. However, we believe the domestic economy still has momentum, so we anticipate some inertia (towards deficits) in the trade balance. 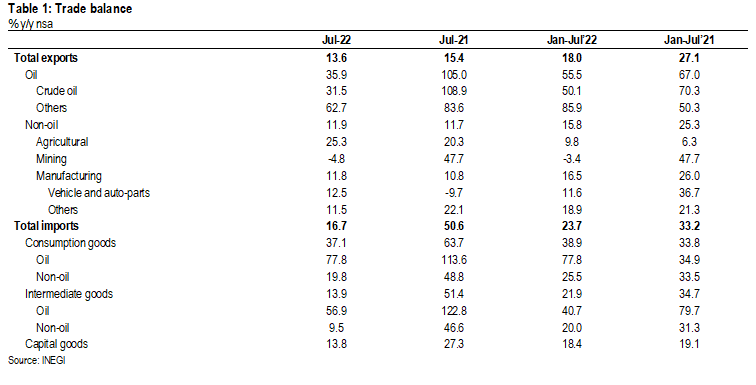 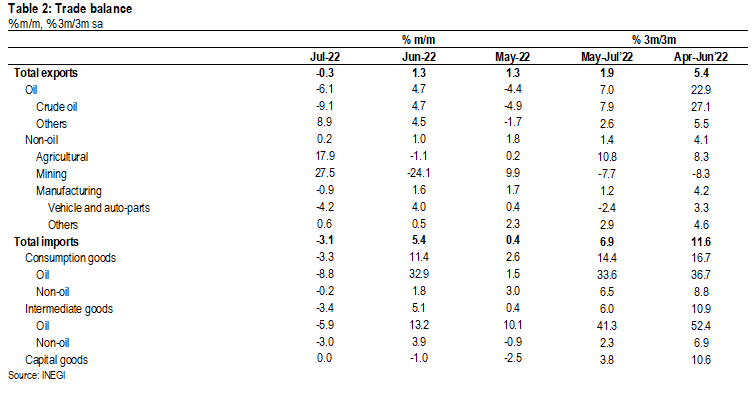